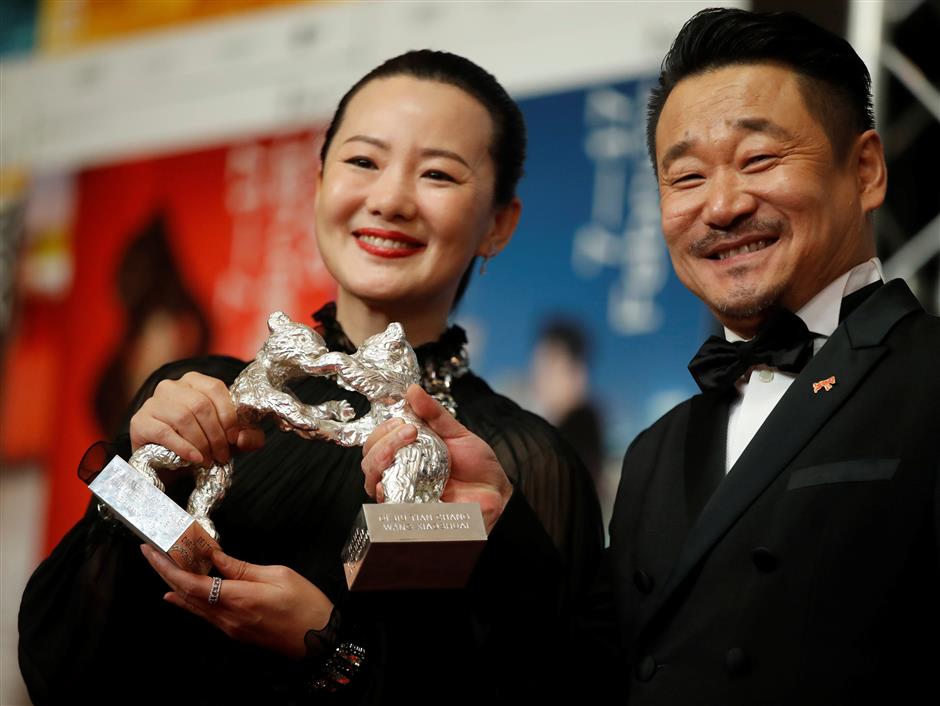 Wang Jingchun (right) and Yong Mei pose with Silver Bears for best actor and actress for "So Long, My Son" after the news conference at the 69th Berlin Film Festival in Berlin, Germany, February 16, 2019.

"This is the tragedy of a woman, a family that loses its son," Yong said as she picked up the trophy.

"We were happy we were able to complete the film."

Israeli director Nadav Lapid won the Golden Bear top prize for "Synonyms" about an expatriate in Paris wrestling with his identity.

Lapid said that the semi-autobiographical movie, which deals with a young man who has fled Israel over its fraught political situation, might cause a "scandal" in his home country.

"But for me the film is also a big celebration... of cinema," he said.

The runner-up jury prize went to French filmmaker Francois Ozon "By the Grace of God," a wrenching drama based on real-life survivors of rampant sexual molestation in the Catholic church.

"The film tries to break the silence in powerful institutions," he said.

"I want to share this prize with the victims of sexual abuse."

German filmmaker Angela Schanelec won the best director prize for "I Was At Home, But," a drama about a grieving widow and her wayward son.

Schanelec, 57, was one of a record seven women among the 16 contenders in the competition at the Berlinale, Europe's first cinema showcase of the year.

The awards ceremony began with a tribute and standing ovation for Swiss actor Bruno Ganz, who starred in iconic German films such as "Downfall" in which he played Adolf Hitler and Wim Wenders's "Wings of Desire" set in divided Berlin.

Berlinale director Dieter Kosslick earlier called him "one of the greatest and most versatile actors," who made "international film history.

"Now he is truly in the heavens above Berlin," he said in a play on the Wenders film's German title, "Der Himmel ueber Berlin."