China’s box office continued its record-breaking trend during the Spring Festival season when it surpassed 5.8 billion yuan (US$857 million) during the seven-day holiday period, from February 4 to 10. It was a slight increase on the previous year, when 5.75 billion yuan worth of tickets were sold.

A single-day record was also broken when 1.43 billion yuan was taken on February 5, the first day of the Year of the Pig in lunar Chinese calendar.

With over 2 billion yuan in box office receipts, Chinese sci-fi blockbuster “The Wandering Earth” was the highest-grossing movie during the week.

The movie’s success is all the more remarkable as it does not feature any big stars and it was not heavily promoted. But, following overwhelming praise by movie buffs and film review website critics, cinemas immediately increased screenings and tickets were quickly sold out.

Kevin Zhang, a 30-something administrative worker, saw the film with his family. He said the film made a big stride in China’s film industry in its attempt at the sci-fi genre.

“Over the past decade, I have been a super fan of Hollywood sci-fi movies, but ‘The Wandering Earth’ has really boosted my confidence in homegrown sci-fi productions,” Zhang said. “I was stunned by the movie’s spectacular settings and visual effects to depict a different Earth in 50 years.”

Adapted from Hugo Award-winning writer Liu Cixin’s novel, the film is a story about mankind’s efforts to move Earth out of the solar system after they discover the sun is dying and swelling. On this 2,500-year journey to find a new Sun, global scientists and astronauts have to figure out a way to prevent Earth from crashing into Jupiter.

The film is considered a milestone in Chinese sci-fi filmography. Many viewers commented on Chinese film review website Douban that its magnificent imagination, special effects and cinematography are not inferior to Hollywood mega-productions. Moreover, the movie’s inherent emotions, traditional Chinese philosophies and values make it different from the usual Hollywood fare and resonate well with Chinese audiences.

Lisa Pan, a public relations worker, was excited to see the film’s impact on her teenage son who bought the original novel to read. In her eyes, the film is not simply a tale of heroism, but a thought-provoking epic story about mankind’s endeavors to preserve human civilization.

“In many Hollywood sci-fi productions, human beings usually leave Earth in a spacecraft for a new planet when the world comes to an end,” she said. “However, the story of ‘The Wandering Earth’ portrays Chinese people’s deep emotions and connections with their homeland, therefore, they choose to take the Earth with them for a long-time journey.”

It took director Guo Fan four years to make the movie. With a budget of around US$50 millions, over 7,000 people were involved in the production. The film has also started showing at IMAX 3D theaters in North America.

After its box office success, Guo’s idol James Cameron posted on Weibo, “Good luck with your space journey of the ‘Wandering Earth.’ Good luck with the voyage of Chinese sci-fi films.”

Guo told media that it was a big challenge for him to put a novel with only 20,000 words onto the big screen.

At the beginning, many film investors and fans of the original novel did not believe that a great sci-fi movie could be made by a Chinese filmmaker. But he and his team didn’t give up.

Their perseverance moved mainland star Wu Jing, the “Wolf Warrior” franchise actor, who agreed to star in the film for free and even brought his own investment.

Industry insiders anticipate that the film’s success will open up a new era for the domestic film industry to develop sci-fi movies and other new film genres in the future.

Hong Kong filmmaker Stephen Chow’s “The New King of Comedy,” a remake of the 1999 film “King of Comedy,” was not as popular as expected. It raked in 532 million yuan. Three years ago, also during the Spring Festival holiday, Chow’s comedy film “The Mermaid” reaped 3.39 billion yuan in ticket sales.

“The New King of Comedy” only rated 5.8 out of 10 on Douban. Netizen “Summer Worm” said the film, about the life of a film extra, lacks novelty.

He said, “It is a repetition of the former work and too much product placement is included.”

Animated films, “Boonie Bears: Blast into the Past” and “Peppa Celebrates Chinese New Year,” were popular with children during the holiday. The two movies respectively grossed 421 million yuan and 112 million yuan.

Statistics from Maoyan, a professional box office tracker, revealed that this year’s Spring Festival holiday had many more film screenings.

There were 495,000 screenings on the first day of Chinese Lunar New Year alone, a 26 percent increase over the same time last year. More and more Chinese movie buffs chose to buy tickets on the Internet based on the first batch of audiences’ online reviews.

IMAX screenings during the holiday also saw a 16 percent increase in audience numbers. The 599 IMAX theaters around China reaped 217 million yuan in total, which increased by 40 percent compared with last year’s Spring Festival.

“Boonie Bears: Blast into the Past” 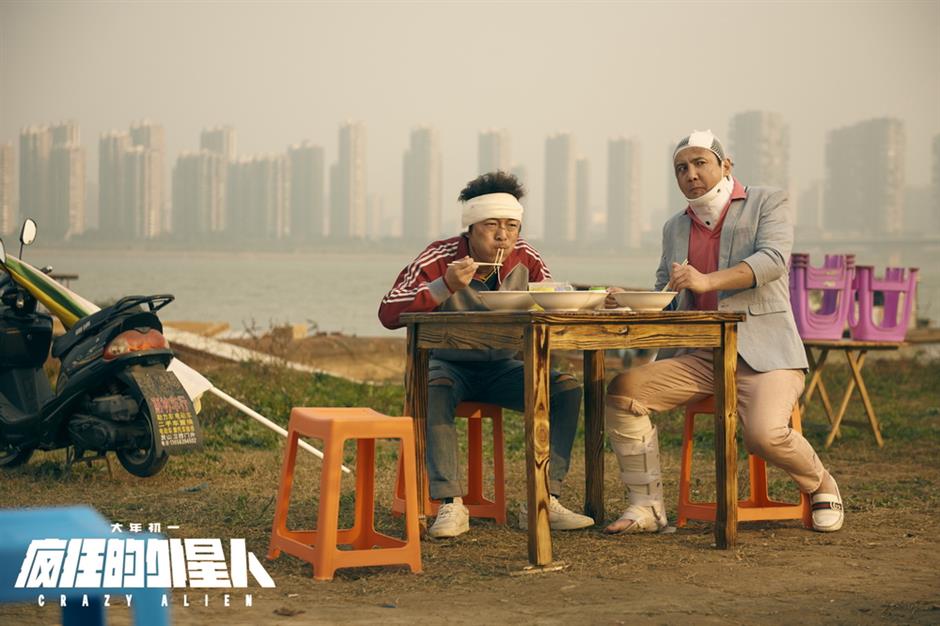