“Ghetto” made its Chinese debut at the Shanghai Poly Theater on March 2 and 3.

Written by Israeli writer Joshua Sobol, the play tells of the experiences of Jews in the Vilna Ghetto during the Nazi occupation in World War II. It focuses on Jewish theater in the ghetto, incorporating live music and including historical figures such as Jacob Gens, chief of the Jewish Police and later head of the ghetto.

The play has been performed all over the world since 1984 but this is the first Chinese version.

“I was positively amazed by Anna’s singing,” said Sobol. “It is one of the best versions I’ve heard, and I have heard many versions.

“She has gift to express the right emotion of every song,” he said. 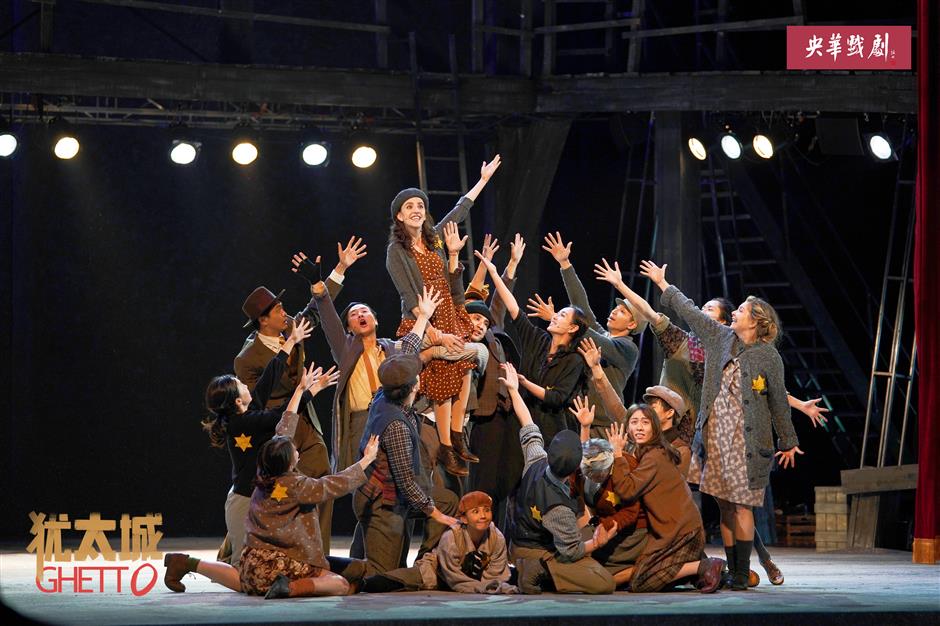 “Ghetto” made its Chinese debut at the Shanghai Poly Theater.

Martane has worked in China as a photographer since 2011 and has managed to merge the two things she loves: photography and Chinese culture.

“I might have thought about becoming an actress when I was a little girl,” said Martane. “So it felt wonderful, almost surreal when Joshua asked me if wanted to be the leading actress.”

Martane said her husband had shared a few tips to help improve her performance.

“When I’m on stage, my eyes wander from one spot to the other, and he told me to hold eye contact and stare firmly, tips like that, ” she said.

For Martane, the biggest challenge came from the character, not the acting.

“Because as a half Jew, I’m used to putting the Jews at the position of victims,” she said. “But in this play, people have complex personalities. So they weren’t only victims as some Jews also worked for the Nazis in order to survive.

“So this is against my 39 years of education, and was hard to accept at first,” she said.

Yan Nan plays the role of Gens, a deeply conflicted man who does his best to save lives, even if it means working with the Nazis and letting some die so others may live. “He’s complex and has many layers,” said Yan.

When the play was showcased in Germany, Sobol was approached by some members of the audience about Gens.

“They say the Nazi officer in the play wasn’t a monster, but someone they could be friends with,” said Sobol.

Sobol created the play to express how creativity could became a weapon when humanity is under threat. When the play was performed in Japan in 1995 after the Great Hanshin earthquake, Sobol received heartwarming comments from the audience.

“They said that they learned how a community can find the power to overcome catastrophes,” he said.

Martane thinks the optimism expressed in the play matches the history of the city, and that’s the connection between “Ghetto” and Shanghai.

“Many Jewish people died in Shanghai from drinking raw tap water,” she said.

“But actually what they remembered was how Shanghai helped them while the city was under war itself. And it matches the optimism expressed in the play, this is what gives me the power and strength to act in ‘Ghetto’ and live in China,” said Martane.

The Chinese cast is the youngest ever for “Ghetto,” said Sobol, but they are the right age for the characters. The young actors bring an energetic and lively performance to the production, he said.

The play is to be performed in Changsha, Kunshan, Nanjing, Hefei and eventually in Beijing.