Shanghai Ballet is to debut a version of Alexandre Dumas fils’ classic novel “The Lady of the Camellias” next month at SAIC Shanghai Culture Square.

The novel, first published in 1848 when the Frenchman was 23, was subsequently adapted by Dumas for the stage and has appeared in many dramatic versions. But now Shanghai Ballet is to perform its own two-act ballet “Camellias,” choreographed by renowned British dancer and choreographer Derek Deane, and accompanied by the music of Carl Davis.

“We have been working with Deane for the past seven years on works such as ‘The Nutcracker’ and “Romeo and Juliet,’” said Xin Lili, head of Shanghai Ballet.

“When he said we are ready for the Camellias, I believed in him. I want the production to stay true to the original characters created by Dumas but with new storytelling sequences and eye-catching stage design.”

The play unfolds the narrative in flashback, starting with the imminent death of Marguerite. She sees things being removed from her luxurious apartment before a series of memories is recalled from various scenes at the theater, at balls, the beach and gambling clubs. Overcome by memories, she collapses.

Wu Husheng (Armand) and Qi Bingxue (Marguerite) started rehearsing under Ivan Gil Ortega, assistant choreographer to Deane, four days before the National Day holidays. Ortega performed in a wide range of classical and contemporary ballets and worked with many of the genre’s leading choreographers. He used to play the doctor in the Camellias so is quite familiar with Davis’ music and Deane’s style. He hummed, counted the steps and explained the intention behind the postures, among other things. 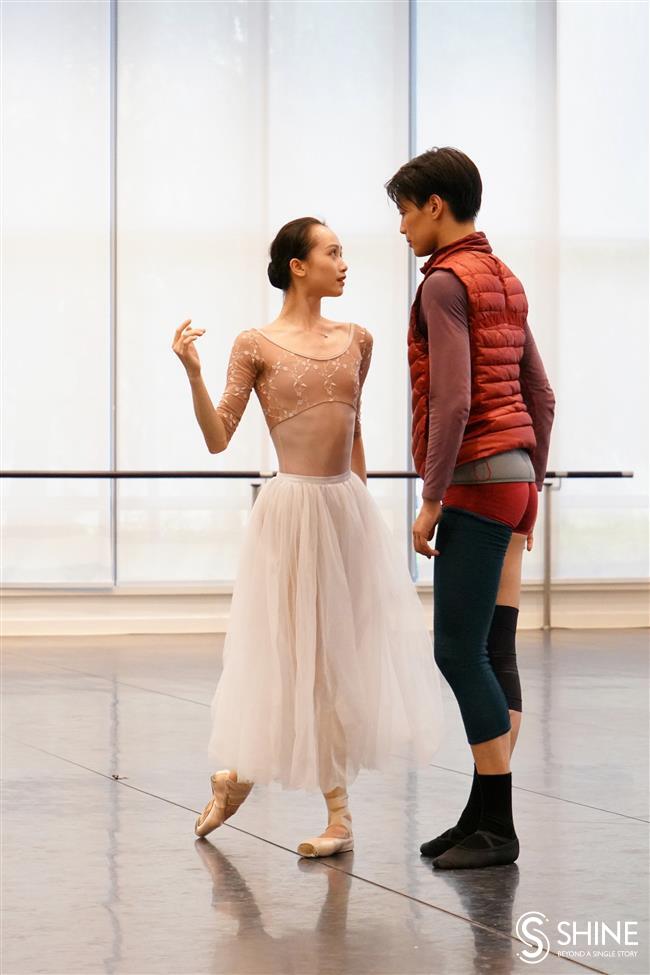 Qi Bingxue (Marguerite) and Wu Husheng (Armand) at the rehearsal

“Compared with other dance dramas adapted from classic literature, the difficulty of Camellias lies in the delicate and pure interpretation of the characters,” said Ortega, whose job was to get the two to fit in their roles, and “both of them are doing quite well.”

Qi prepared herself for the role, besides the daily rehearsal, by reading the book several times over and found the character very dear to her heart.

“Despite having many lovers, Marguerite has never really loved — until she meets Armand Duval, young, handsome, and hopelessly in love with her,” said the 23-year-old, who admitted she adored Marguerite for sacrificing her love for Armand. “At the heart of the ballet lies the tragic destiny of Marguerite.”

Compared to Qi’s role, Wu’s Armand is romantic and ideal.

“I cried when I watched the 1936 movie ‘Camille’ starring Greta Garbo. It reminds me what it means in a true romantic relationship, in which a man keeps a woman for good times is respect and true caring,” said Wu.

“A ballet is a story told through movements. Marguerite is the life and soul of the play. Her movements are soft and graceful, and I will play her a good supporting role.”