Chinese audiences are once again over the moon about a new reality television talent show that has garnered 2.1 billion online clicks only one month after its June launch.

With a cast of 30 female performing artists, all well known, high achieving and over the age of 30 — the oldest is 52 —  “Sisters Who Make Waves” is taking the country by storm and crushing other pop-idol-producing talent competitions open mainly to teens and 20-somethings.

Five “sisters” will be selected to start a new female idol group based on charisma, teamwork spirit, vocal expression, dance ability and on-stage performance. To make the final cut, they must endure rounds of training, exams, performances and voting by a live audience consisting of 500 female judges chosen randomly from online applications.

Since it debuted last month, the show has sparked waves of discussions on gender equality and female empowerment.

One of the highest upvoted comments on the social network platform Weibo reads, “Somehow I’m not afraid of being old.” Another writes, “Society is not so friendly to women over 30 years old, especially those who aren’t married. The show proves that women, no matter how old they are, can still shine with confidence and won’t be defined or knocked down by prejudice and malice. Just be yourself.”

A group photo of the 30 female performing artists at the back stage of the show, which sees actress Ning Jing taking the front center stage.

The notoriously ageist entertainment industry has no such show that targets women over the age of 30.

“Middle-aged female performers are eager for a stage, and at the same time, middle-aged female audiences are badly in need of a show that gives them something they can share and get involved in,” said Shen Yifei, associate professor of sociology at Fudan University. “If we cast our eyes on our neighbor South Korea’s showbiz, they have already produced romantic films and TV dramas featuring middle-aged relationships. The market is huge.”

Chinese women have been told for hundreds of years to get married early and have kids, regardless of how successful they are at work — from talented artists to tough businesswomen and politicians. They are expected to sacrifice their careers and lives to family and children, because the safest and most acknowledged identity for a woman is daughter, wife and mother.

“Leftover women” is a rude but widely used derogatory term referring to single Chinese women over the age of 30 considered to depreciate as they age.

It seems no women in China can escape this social prejudice. Just a few days before the show launched, another heated discussion about women’s value went viral in cyberspace.

Yang Liping, 62, an internationally acclaimed and still-active dance artist, was criticized by a female netizen for being unmarried and childless. She wrote under Yang’s vlog, “A woman’s biggest failure is having no children. You’re lying to yourself if you feel good about just living for yourself. No matter how pretty and fulfilled you are at this moment, you will age eventually. When you reach 90, you won’t have the joy of a room full of children and grandchildren.”

This disrespectful comment received more than 11,000 likes. However, it received many more dislikes from people highly critical of what they called an “antiquated” notion.

Contestants in “Sisters Who Make Waves” include many who go against traditional Chinese family values, including single mothers, married women without children and remarried divorcees.

Struggling in a notoriously ageist entertainment industry, they all admit it’s more difficult than when they were younger to find a stage to perform when so many young stars are emerging.

“I don’t like people saying what women should do at a certain age,” said one of the Sisters, thrice-married 50-year-old Christy Chung, an actress with three daughters. “Then what? Should I wait to die at my age?”

“I can do a lot more than just sing,” she said. “I’ll grab every opportunity to stand in the spotlight.”

Sister Zhang Yuqi, 33, who starred in the Stephen Chow films “Mermaid” and “CJ7” while in her 20s, said that she has found there are no movie roles for women her age right now.

“There is no movie that features middle-aged women and women’s power of maturity, independence and sex appeal,” she said. “I’ve called every producer and director I know, and they all replied no.”

It’s a similar scenario for most middle-aged women: work pressure and trying to climb the corporate ladder. 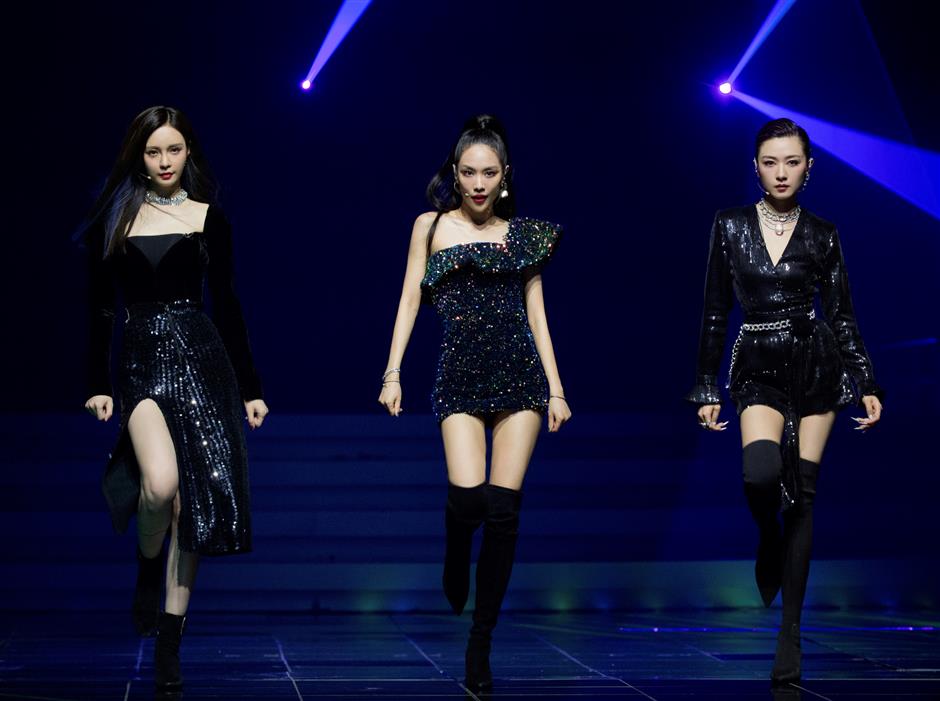 In a recent news poll of 1,000 randomly chosen professional women, 40 percent said they have been in a bad, anxious mental state for a long time due to lack of confidence, low salaries, bad relationships, limited upward mobility and pressure from younger generations.

Enter the Sisters, tough industry veterans who flout the rules, challenge cameramen, argue and talk back to judges, which many middle-aged women find comforting and gratifying.

Taiwanese singer Annie Yi, 52, the oldest sister on the show, refused to change her pose in front of a camera. “Just let me sit in my way, okay?” she said. When asked to do a brief self-introduction, actress Ning Jing, 48, shouted, “Do I need to introduce myself? Then what I’ve done for so many years is in vain.”

Actress Lan Yingying, 30, was criticized by the public for being too ambitious with her strong desire to win, because she asked her teammate to learn to play a musical instrument in 10 days. The teammate Wu Xin, a 37-year-old TV host, cried. “I know nothing about instruments. It’s  mission impossible. I feel like I’m dragging my team down.”

Drama is one of the show’s biggest attractions. Is there anyone who doesn’t want to see pretty, dressed-up women fight with each other?

“It’s a selling point of the show, but I don’t like it,” said Shen the sociologist. “Because fussy, critical, aggressive and argumentative are  stereotypes of middle-aged women. To some extent, the way the show promotes itself forces these gender cliches. As far as I’ve observed, however, the dramas are just okay. Men would have fought in the same way if they were in a competition.”

At the same time, the “wave-making sisters” have received a chorus of boos.

“From my point of view, the show hides its ugly values under a fancy robe,” said Wang Dawei, an influential blogger with 100,000 fans on Weibo. “It’s trying to tell Chinese women that if you are old, you need to prove in every way you’re still attractive. You have to look, sing, dance and live like a young girl. You’ll be nothing if you are no longer young or look young.”

He might be telling the truth. All the Sisters have smooth skin, svelte bodies and unwrinkled faces. When they meet backstage, they always flatter each other with words like “Oh, you look so young and pretty.”

But Shen has a different view. “It depends on how you define it. Trying to ‘stay young’ can be viewed in a positive way to defy aging. We can’t criticize it too much. The show seems to focus more on the sisters’ talents and women’s self-discipline, self-acceptance, mutual trust and support than merely their appearance.”

On the other hand, Shen points out, there is a big gap between celebrities and ordinary women.

“Most women over the age of 40  in everyday life can’t look as good as those on the show. It requires a lot of energy, time and money, which most women don’t have. You may look at the show as either encouraging for middle-aged women or pure entertainment, but sociologically it influences everyone who watches it in some way. Just don’t overestimate its influence.”