Open-air performances have become the norm this summer, with indoor seating at theaters still restricted because of coronavirus risks.

SAIC Shanghai Culture Square is among the venues offering outdoor shows to audiences seated in chairs on the lawn.

“With indoor theater performances restricted to 30 percent audience capacity, these open-air performances give us more freedom,” he said. “And audiences can enjoy a more relaxed environment, compared with usual theater etiquette.”

He added: “Audiences can even wear slippers to the performances. We want to create an intimacy with audiences through this new format.” 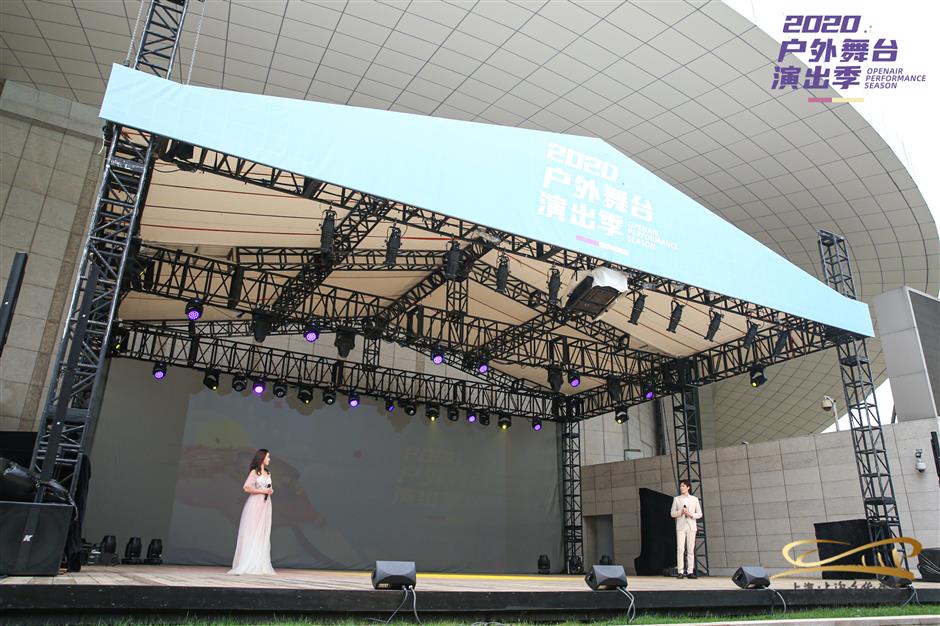 The open-air performances are scheduled on weekends through August 23. They are mainly small-scale musicals and concerts, as well as some crossover shows.

Jazz, light music and even pingtan, or storytelling to music in Suzhou dialect, will be featured.

The Senza Quartet will perform songs from classic world films and musicals on July 26. Gao Bowen, director of Shanghai Pingtan Troupe, will lead two performances on August 21 and 22.

A 140-square-meter wooden stage has been set up outside the main structure of Culture Square. Its flexible roof provides shelter and basic lighting effects. The stage is also equipped with waterproof stereo.

“The speakers were carefully chosen,” said Fei. “They can be adjusted to suit different performing genres so that the sound reaches the audiences without disturbing surrounding neighborhoods.”

The seats on the lawn in front of the stage are also protected by a flexible roof, allowing performances to continue during rain.

Emergency plans have been made in case of extreme weather. If typhoon is forecast, Culture Square staff will monitor conditions and inform audiences in advance of any change in schedule. If torrential rains erupt during the middle of a show, the performance will be suspended for up to 20 minutes, during which organizers will decide whether to continue or postpone the show to another date. Four hundred seats on the lawn have been arranged with distances of half a meter between them. Audiences are provided with plastic fans and mosquito repellent at the entrance. Food, drink and merchandise stalls will be set up near the stage on weekends to create a music festival-like atmosphere.

How are performers and audiences responding to the new arrangement?

“In theaters, audiences are usually sitting in the dark,” said Ding. “However, outdoors you can see their reactions clearly from the stage. I need to stay concentrated and avoid being distracted by that.”

Liu said he really enjoyed the experience of closeness to an audience.

“I could observe the reaction of audience members and see which parts of my performance they enjoyed most and which parts need more work,” he said.

Indeed, the whole relaxed atmosphere seems to suit both audiences and performers.

“They almost became crosstalk performers when joking with us during performance intervals,” musical fan Zhou Shuo told Shanghai Daily after the concert. “The stage setting is relatively simple, but we get to see the more vivid side of the performers.”

More musical concerts will be staged in the following few weekends, featuring domestic and original musicals like “In the Mood for Sorrow,” “The Search of Sound” and “Take My Brother Away,” to name a few.

The outdoor stage has been a particular boon to smaller-scale musicals.

“We all know that Culture Square is the city’s signature venue for musicals,” said Yu Xinyue, general manager of ACO Musical. “But small-scale productions rarely get the chance to be staged in the main hall. The open-air stage has given them new opportunities to appear before audiences.”

She added: “If the open-air stage becomes a more permanent feature of Cultural Square performances, our company will tailor more smaller performances, and that will enrich the choice of Shanghai music lovers.”

Yu said ACO Musical, like most private musical production companies, has been seeking to rescue itself from the effects of the coronavirus pandemic.

“We study our financial reports every month to see how much longer the company can survive,” she said. “Apart from selling musical side products, the company plans to increase income by developing musical courses for the public, as well as getting involved in government-led culture and tourism projects.”