One has to be intrepid to even think about adapting a mystery novel by Japanese author Keigo Higashino into a stage play.

Young Chinese director Zhao Miao is up for the challenge. He is bringing “Murder in the Corridor Pavilion” to the Shanghai Oriental Art Center on November 14 and 15.

The challenge is to present a complicated suspense story in stage language and to maintain authenticity when so many theatergoers have probably read the Japanese author’s popular works.

Higashino’s books have widespread fans among East Asian readers. His award-winning mystery novels include “Secret,” “The Devotion of Suspect X,” and “The Miracles of the Namiya General Store.”

By 2018, he had published 66 novels and also wrote essays and children’s books.

Zhao’s version of “Murder in the Corridor Pavilion” is adapted from Higashino’s eponymous 1991 novel. The play combines a classic detective format with elements of a revenge thriller. In the play, a woman risks her life to avenge the murder of her lover. 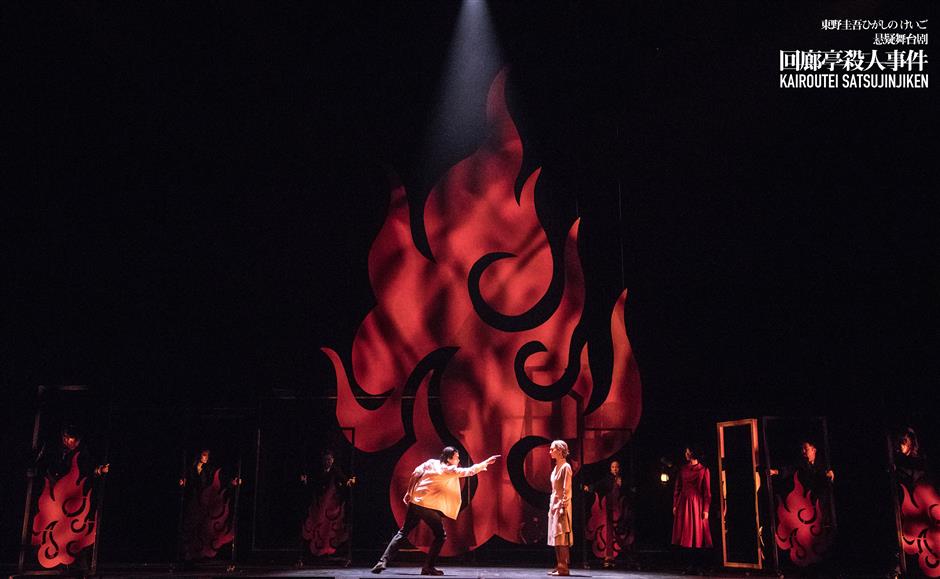 The play, adapted from Keigo Higashino’s “Murder in the Corridor Pavilion,” is a combination of detective story and revenge thriller.

“I always liked suspense and mystery stories, including works by Edgar Allan Poe and Agatha Christie,” Zhao told Shanghai Daily. “I was attracted to this particular novel the first time I read it, though it is not among Higashino’s best-known works.”

Zhao said he was not able to find much information when searching for creative background on the novel.

“I discovered that Higashino’s works were stagnating around the time he wrote the novel,” said Zhao.

“This novel came at a transition in his writing style. The copyright owners allowed us to make adjustments to the plot to suit stage conditions, which strengthened my determination to bring the work to the theater.”

According to Zhao, the most difficult part of the adaption was to condense the novel into a 48-hour story, which suits theaters better.

“I removed some background and some supporting roles to make the storyline more intense,” he said. “I also encouraged the actors and actresses to push the story forward, using more body language than dialogue. One tends to be lost for words when he or she is overwhelmed by emotions. I want the performers to act out their inner worlds.”

According to producer Jia Hailin, each performance will have a slightly different ending.

“Those attending our performance on Sunday can discover that the story will end a bit differently from what Saturday audiences talk about,” he said. “It’s a bonus for audiences. We want to leave them more space for imagination and discussion.”

He added: “‘Murder in the Corridor Pavilion’ is not as famous as Higashino’s other works, which, in a way, eased our pressure in adaptation. We promise it will be different from other Higashino plays on the market.”