VIPs step out of the past in bookshop theatrical

On trips to China during their lives, they all first disembarked at the docks on the North Bund in Shanghai.

To mark that shared experience, pay tribute to their genius and highlight the fusion of literature and drama, JIC Books on the North Bund hosted a recent immersive play bringing the five luminaries to life.

The play, entitled “North Bund Wave,” started in the bookstore’s café on the fourth floor with two actors dressed as Russell and Einstein, reciting selections of their writings.

Then, an actress playing the role of Eliza in Shaw’s play “Pygmalion” took over the show, leading the audience into a corridor where an actor portraying Chaplin took part in a boxing match taken from a scene in his silent comedy “City Lights.”

Eliza then led the audience into another hall for a short musical performance before an actor portraying Tagore, who won the Nobel Prize for Literature in 1913, emerged from behind bookshelves to recite his poem “Let Life Be Beautiful Like Summer Flowers.”

“All five celebrities featured in the show came ashore on the North Bund for visits to China,” said Xie Chongcheng, JIC Books manager. “As a bookstore located beside the old docks, we were inspired by this historical fact in combining literature and art in our store.

Xie said the bookstore, which specializes in biography and history, is always trying to enhance its connection with readers by organizing offline activities, like culture-themed dialogues and painting or book exhibitions.

“If participants feel the impulse to read some Tagore poems or Russell’s writings after watching the play, I would say that our purpose has been served,” he said.

The audience was limited to about 30 readers. Most of the performers were Shanghai Normal University students majoring in acting.

“Bookstores create an ideal setting for art and cultural activities,” said Yang Yang, who works for the Shanghai Dramatic Arts Center and was the play’s assistant director.

“Visitors calm down immediately the moment they walk into a bookstore,” he said. “This special staging also brings performers closer to audiences.”

Xie said the bookstore intends to make the play a yearly event.

According to Yang, the producing team might upgrade the drama next year by introducing multimedia elements. 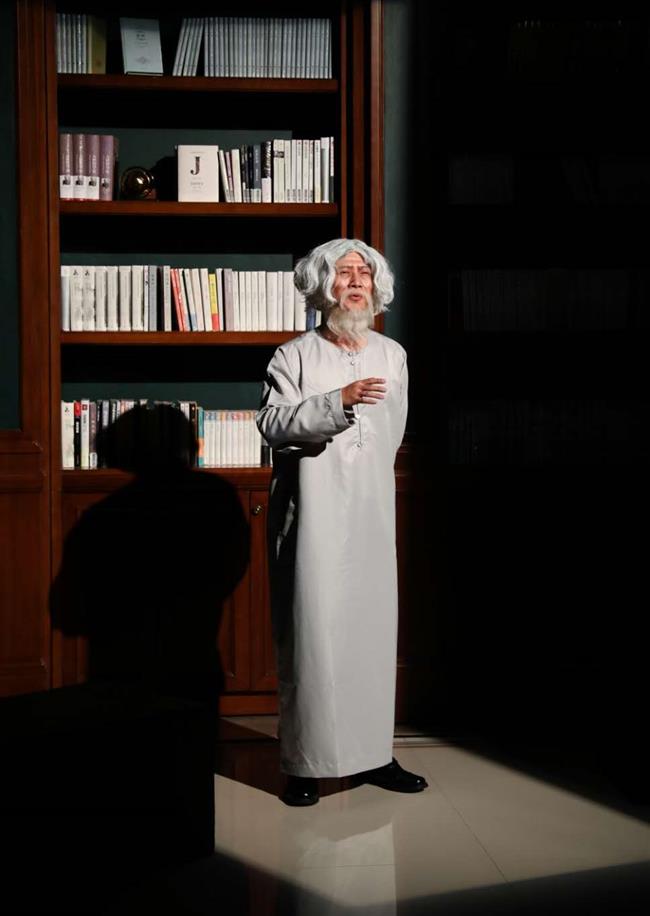