Produced by the Shanghai Film Group, the film is adapted from the classic Peking Opera play “Grand Occasion in the Golden Years of Zhenguan,” which is also a representative work of opera master Shang Changrong.

Traditional Chinese theatrical elements were combined with modern 3D cinematography to tell stories about the prosperous year under the reign of Emperor Taizong (AD 626–649), which is known traditionally as the “era of good governance of Zhenguan.” 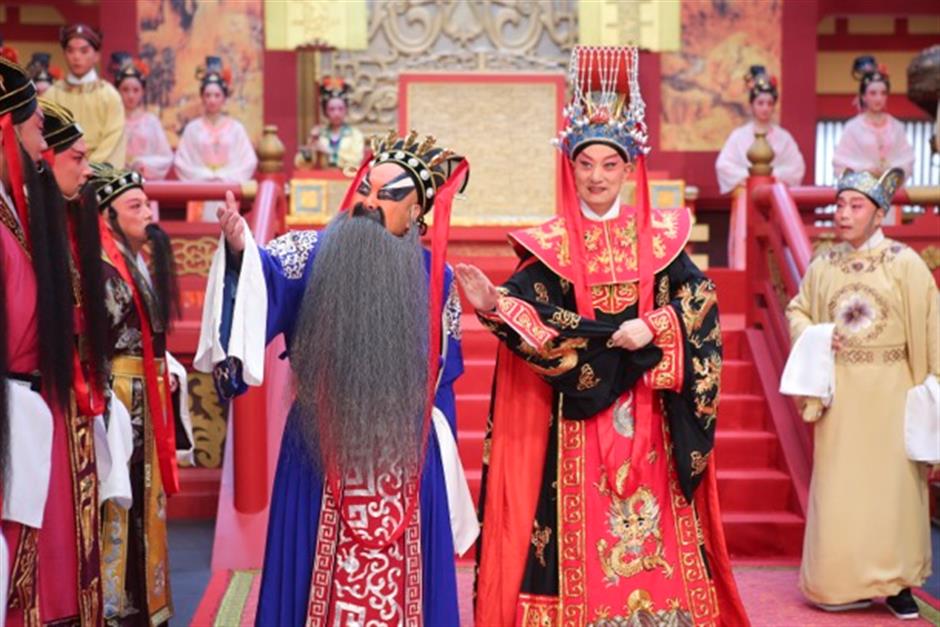 Director Teng Junjie once again sat in the director’s chair, following his success in “Farewell My Concubine,” “Xiao He Chasing Han Xin Under the Moonlight” and “Cao Cao and Yang Xiu.”

Teng believes the award is important because it helps promote the city’s creative industry using cultural heritage in the branding strategy.

He added that successful film adaptations also give a new vitality to traditional theaters in the modern era.

The two-hour film mainly depicts Emperor Taizong’s conflict with his chancellor Wei Zheng, who was an outspoken critic of the emperor.

Lavish sets have been created to highlight the aesthetics and charm of the opera, while the cameras provide a panoramic recording of the artists’ singing and acting.

“The Height of the Early Tang Dynasty”

Over the past decades, opera film as a film version of traditional theatrical opera story has rapidly developed and plays an important part in Chinese cinema. China’s first movie “Dingjun Mountain,” which tells the story of an unyielding general, was produced in 1905. It features Peking Opera artist Tan Xinpei’s excerpts from classic Peking Opera play “Romance of the Three Kingdoms.”

Mei Lanfang (1894-1961), a famed Peking Opera performer of female roles, starred in a total of 14 opera films during his career, and brought the art form to an international audience.

After the Yueju Opera film “The Butterfly Lovers” in color in 1953, the Shanghai Film Group produced “A Dream of Red Mansions” in 1962, starring Xu Yulan and Wang Wenjuan, which was a box office sensation in the 1960s and 1970s.

SFG has recognized that many of the nation’s early traditional theater artists are now in their autumn years and want to preserve their performances for posterity and for future research.

In 2017, the group set up a video recording base to capture traditional Chinese opera stage productions. So far, 54 video works have been completed and aired on TV.

The Shanghai Film Museum is also collaborating with the Shanghai Center of Chinese Operas to build up a screening platform for opera movies. In the future, “The Height of the Early Tang Dynasty,” and other acclaimed opera films, will be screened on the platform to cultivate a younger audience.

As for the future, the group is working on its latest Peking Opera film, “The Capture and Release of Cao Cao,” a famous story of the Three Kingdoms (AD 220-280). Shot in 8K resolution, the film stars Wang Peiyu, who is known for her deep and mellow voice in depicting Peking Opera’s laosheng (old male) role.

Special Reports
ADVERTISEMENT
Opera movie 'The Height of the Early Tang Dynasty' scoops Golden Rooster honor
A feast of music to welcome the new year
Action-packed comedy unleashed in January
Original musicals, new talent: It's all starting this month!
Sino-French team in cloud training for acrobatic spectacular
Equipping the next-generation professionals for the runway
Broadway musical 'First Date' gets Chinese makeover
Ringing in the holiday season with distinctive note
A female take on life's challenges during the pandemic
T-34 set to jump off movie screens across the country
EXPLORE SHINE