Ballet leads us on an architectural tour

However, his performance isn’t a tour de force confined to a set stage. Wu’s choreograph of his work “Hard to Say Goodbye” takes him and fellow dancers through the historical building that started off as a cinema in the 1930s.

The show, which premiered last week, was tailor-made for the concert hall that reopened in September after an 18-month renovation.

In 30 minutes, Wu and four other dancers take the audience on a tour through the iconic classic Corinthian columns, elegant dome and terrazzo floors. It’s a choreographed journey that integrates architecture, music, dance and multimedia lighting.

The concert hall’s distinct lobby, corridors and various halls all become dancing venues, with the closest audience only a meter away from performers. “It was a very intriguing experiment, completely different from dancing on stage,” Wu told Shanghai Daily after the premiere.

“I felt immersed dancing through this historic building,” he explained. “I hope the audience did, too. We were so much closer to the audience. Every change in our moves and emotions — even the smallest change in facial expression — can be seen by the audience. That is a huge challenge for dancers.”

Wu, who entered the Shanghai Dance School in 1997 and joined Shanghai Ballet in 2003, has performed major roles in classical ballets like “Swan Lake” and “The Nutcracker,” and in contemporary productions like “Jane Eyre” and Balanchine’s “Serenade” and “La Valse.”

He has won awards at various international competitions, including the silver award and the Igor Youskevitch Award at the 9th New York International Ballet Competition in 2007.

Wu was dancing in more than 60 performances every year before he stepped into choreography in 2017 — at about the same time he created the stage version of “Hard to Say Goodbye.” 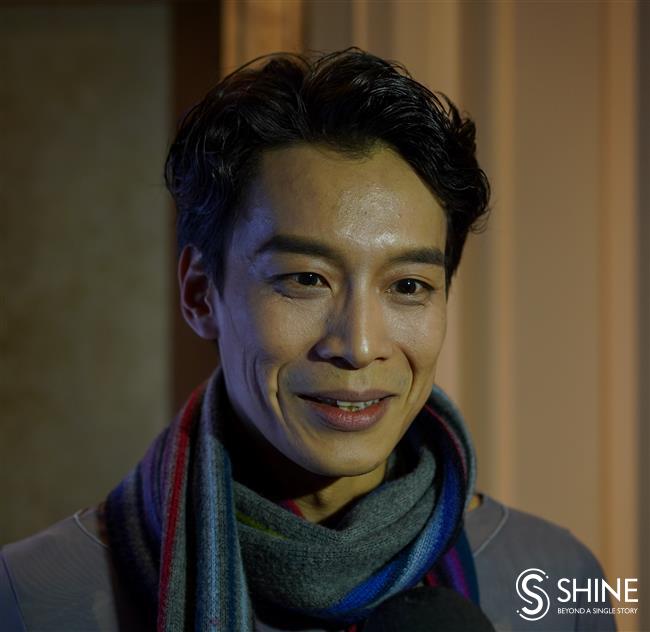 Drawing from his personal experiences and observations, he sought to express in the work the concept of growth through rhythmic ballet movements. The ballet leads audiences through stages of nostalgia, the challenge of confronting choices and looking forward to the future.

Turning the stage piece into an immersive experience was more challenging than simply refitting dance movements into five distinct scenarios in the concert hall.

Classical music players, each performing on different instruments in each scenario, become part of the performance, while multimedia lighting creates relationships between dancers and musicians.

The transitions to different locations were a new challenge that required the most experimentation. Sometimes spotlights led the way as dancers leapt ahead. Sometimes audiences followed the tuneful music amidst darkness into a new scene.

“Should we use music, dance or multimedia? Which ways would best keep audiences immersed in the ambiance?” Wu said of the challenges. “We tried many different ways.”

The show is the latest addition to the city’s “immersive” entertainment scene.

When “Sleep No More,” created by the British theater company Punchdrunk and based on Shakespeare’s “Macbeth,” arrived in Shanghai four years ago, “immersive” performances were a new concept to audiences.

The genre has since become popular and spread everywhere in the city, to exhibitions, bookstores and stage performances that explore new ways of engaging audiences.

Last month, a new immersive drama had its trial run on Wukang Road, stopping many passers-by. The performance of “19 Wukang Road” leads audiences along the street, based on the 1930s and 40s correspondence between a father who joined the army and his wife and daughter, who settled on the road during his absence. The theme is sacrifice for the nation’s future.

“This show is a great experiment on how we could unlock new ways to explore the concert hall after it reopened,” she said. “This historic building is rich with cultural and architectural elements in different spaces, and an immersive show like this can help audiences to experience its beauty from a new perspective.”

“Hard to Say Goodbye” is part of the Art Tree project, sponsored by Shanghai Grand Theater and the Huangpu District government. It features a different art form every year, with the aim of drawing in people who may never have had much experience with the performing arts.

The project started off in 2019 with a focus on the traditional plucked, seven-string instrument called guqin. Top performers gave talks and held workshops about the instrument, leading to a grand performance by 100 professional and amateur players.

This year, the project has featured ballet and a series of workshops and shows entitled “More than Just Art.” The ballet workshop trained beginning dancers, who will participate in the Christmas performance of Tchaikovsky’s “The Nutcracker” at Shanghai Grand Theater.