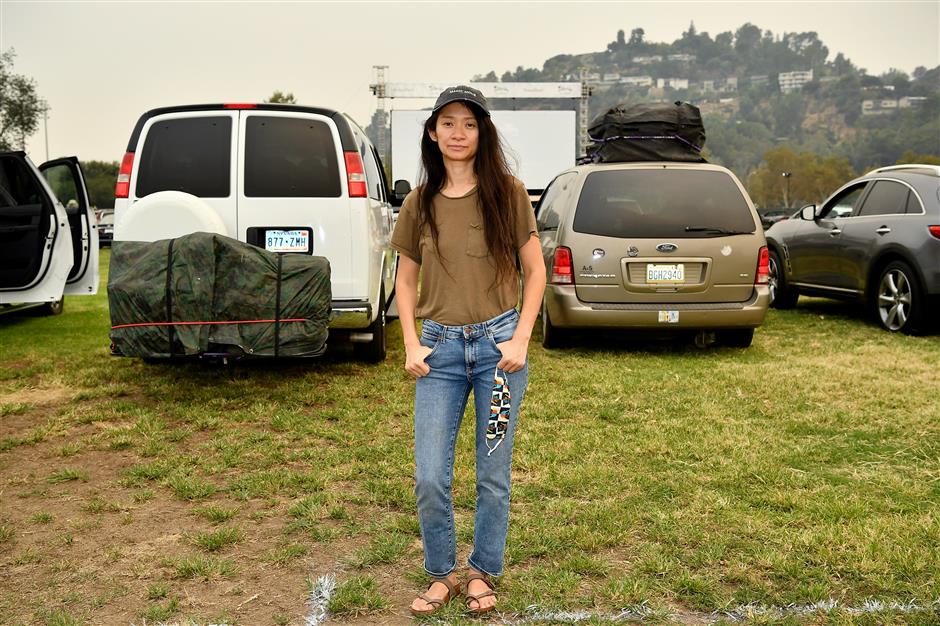 Chloe Zhao attends the drive-in premiere of "Nomadland" hosted by Fox Searchlight and The Telluride Film Festival at Rose Bowl on September 11, 2020, in Pasadena, California.

The road-trip drama, starring Frances McDormand, will compete against "The Father," "Mank," "Promising Young Woman" and "The Trial of the Chicago 7" for the top prize in the motion picture drama category.

Zhao, a favorite among critics in the lead-up to the Oscars this year, received two individual nominations, namely Best Director and Best Screenplay, while two-time Oscar winner McDormand was nominated for best performance by an actress in a motion picture-drama.

Based on Jessica Bruder's 2017 non-fiction book Nomadland: Surviving America in the Twenty-First Century, the film stars McDormand as an out-of-work woman who packs her van and sets off from her small town to travel around the vast landscape of the American West, exploring a life outside of conventional society as a modern-day nomad.

Zhao, born in Beijing in 1982, made history to be the first Chinese woman and woman of Asian descent recognized in the Golden Globe's directing category.

It's unprecedented that more than one female director was nominated in the category. Zhao, alongside fellow female directors Emerald Fennell ("Promising Young Woman") and Regina King ("One Night in Miami"), will compete against two male directors, David Fincher ("Mank") and Aaron Sorkin ("Trial of the Chicago 7").

Sacha Baron Cohen ("The Trial of the Chicago 7"), Daniel Kaluuya ("Judas and the Black Messiah"), Jared Leto ("The Little Thing"), Bill Murray ("On The Rocks") and Leslie Odom Jr. ("One Night in Miami") are shortlisted for Best Supporting Actor - Motion Picture.

"The Croods: A New Age," "Onward," "Soul," "Wolfwalkers" and "Over the Moon," a Chinese-American co-production between Netflix Animation and the Shanghai-based Pearl Studio, got nods for Best Animated Picture.

"Another Round," "La Llorona," "The Life Ahead," "Minari" and "Two of Us" were nominated for Best Foreign Language Picture.

It's the first time in the history of the Golden Globes that the nominations were announced virtually, following the safety measures during the COVID-19 pandemic.

Postponed from the customary January date due to the ongoing pandemic, the 78th Golden Globe Awards will take place on February 28.