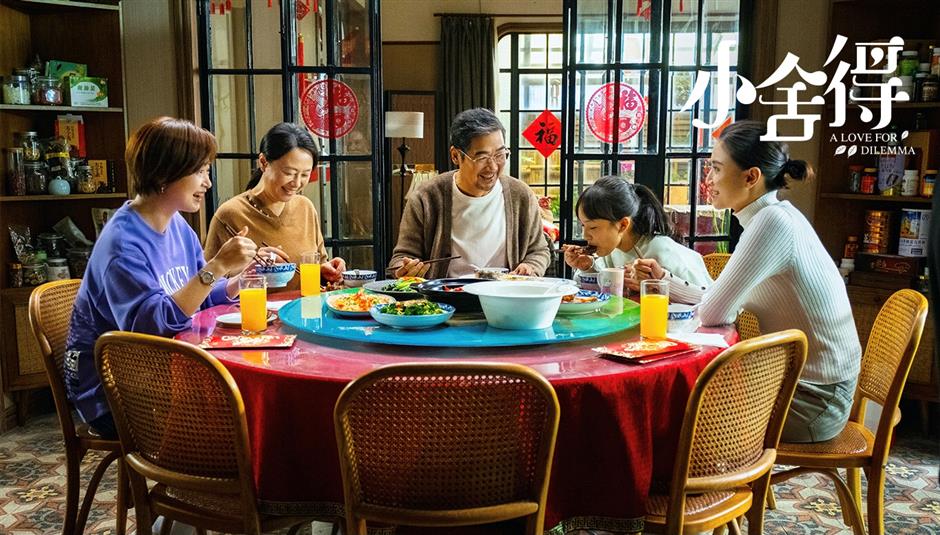 Family drama “A Love for Dilemma,” the final part of a trilogy focusing on China’s education system and parent-child relationship, started airing on Dragon TV and iQiyi on April 11, and has aroused heated discussion on the Internet.

The first two installments — “A Love for Separation” and “A Little Reunion” were both well-received when they aired in 2016 and 2019.

Still based on a novel by Lu Yingong, “A Love For Dilemma” retains the trilogy’s realistic flavor about the daily lives of urban families and their exploration and final compromise on a more rational education approach.

The series, directed by Zhang Xiaobo, revolves around several families whose children are about to enter middle school. Different generations of people hold different concepts and attitudes toward the children’s education, which also evokes conflicts, misunderstandings and relationship crises.

Song plays Nan Li, a mother who is totally in favor of happy education. However, she is so shocked at the sharp decline of her daughter’s academic performance that she has to resort to remedial lessons.

Jiang plays the “tiger mother” Tian Yulan who believes in elite education and the jungle rules. She has arranged all kinds of after-school classes for her son. But while her son is growing and establishing his independence, she soon finds that she needs to mend a broken relationship with her son before it causes any destruction.

Scriptwriter Zhou Yifei, a mother of two herself, said she used to be anxious about her children’s education like most mothers in China.

Although she wanted to give her children sweet memories and a happy childhood, she was worried that their studies would lag behind without taking extra lessons.

“I hope to tell the audience ‘don’t worry, give children more time and patience, and set aside the anxiety and confusion’,” Zhou said. “Let nature take its course and everything that happens in life has its own meaning.”

The series also hopes to inspire parents to find a better way to accompany and communicate with their kids who caught up in fierce campus competition.

Netizen Ms HP commented on the film and TV review website Douban that she is a loyal fan of the trilogy, as it vividly depicts Chinese children’s growth and education in varied phases.

“The story and characters resonate well with us, as most parents and children are facing the same pressure,” she said.

Netizen Yaotouwan said the series encourages her to cherish every moment in life, even the ordinary ones.

“The meaning of life is not to be elite, but to experience, explore and fulfil one’s responsibility for the world,” she said. “Life is like a marathon,” she said. “Every one has his own time to shine.”