The successful run of the drama “Red Poppies” in the city has aroused academic discussion on a new trend of Chinese theater. In recent years, many well-received dramas have gained inspiration from award-winning literary epics.

They usually have a strong realistic flavor, providing an insight into the changes of the society and the meaning of lives.

Earlier this month, a talk on “theater and literature” was hosted in the city. It gathered many cultural celebrities, including Tibetan writer Alai, who wrote the Mao Dun Literature Prize-winning novel “Red Poppies: A Novel of Tibet,” playwright Cao Lusheng, theater critic Sun Mengjin and vice chairman of the Shanghai Writers’ Association Yang Yang. 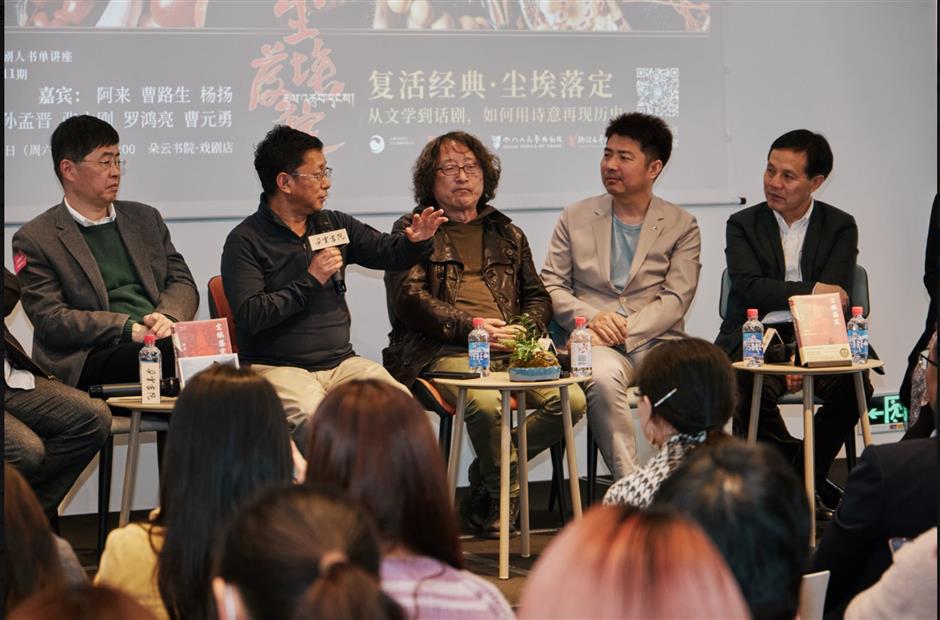 In the post-pandemic era, they exchanged their ideas on the development of Chinese theater, and explored new methods for a poetic and grand stage presentation of dramatic conflicts.

Alai attributed the success of the novel’s drama adaptation to the lines, stage design and performers’ creative interpretation of the characters.

“When putting a novel onto the stage, language is always a challenge,” said Alai. “The theatrical adaptation boasts wonderful dialogues and scenes to tell the story while it stays true to my novel.”

Around 18 years ago, playwright Cao was amazed at the poetic language of Alai’s novel. Throughout the drama, he retained the inner monologue of the main character, the “idiot” son of a powerful chieftain in Tibet. From his perspective, the drama describes the demise of the once-powerful Tibetan chieftainship.

“His monologue is either a narration of the history or a sharp philosophical criticism over the old world,” said Cao.

“The poetic charm, romance and philosophy of the literature is retained in the drama.”

Zhang Ligang, president of Joyway Culture and the play’s producer, noted that they made a decision to put the novel on the stage because of the COVID-19 pandemic outbreak in 2020.

Before 2020, around 90 percent of their projects were foreign stage productions such as popular musicals “Mozart L’opera Rock” and “Dame de Paris.” The pandemic made the percentage drop sharply and they had to develop more homegrown productions. He read “Red Poppies: A Novel of Tibet” again, hoping that it will speak to more people with a stage adaptation.

Zhang said that most of Joyway Culture’s successful plays are based on literary classics, including “Ordinary World” and “White Deer Plain.”

The performances will continue to revive the charm of Chinese literary works on the stage.