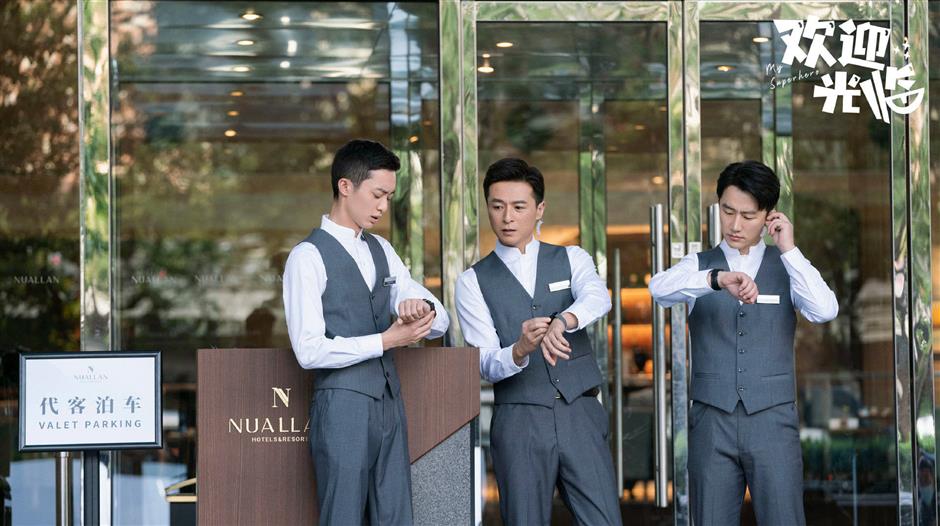 Huang Xuan (right) plays Zhang Guangzheng, the doorman, in the series "My Superhero.

The latest offering from Daylight Entertainment "My Superhero" has been airing on Dragon TV daily at 7:30pm starting May 18.

The light-hearted sitcom, based on a novel by Bao Jingjing and directed by Li Xue, centers on the lives, emotions and philosophy of ordinary people.

A five-star hotel doorman, Zhang Guangzheng, falls in love with air stewardess Zheng Youen. To pursue his love, he decides to change the way he lives and works. He joins a line dance team with Zheng's mother on it. Gradually, he breaks the stereotype of the dance aunts and is influenced by their optimism, confidence and passion for love.

The 37-episode drama series provides an insight into the daily lives of ordinary people living in Beijing. It also depicts heartwarming relationships, distinctive culture and an ever-changing lifestyle in the city.

Actress Bai Baihe, who plays Zheng in the series, said that the story is about how a group of "small potatoes" light up each other's lives with encouragement and warmth despite setbacks in life. She was enchanted by the characters, the down-to-earth plot, and the hilarious lines when she read the script prior to shooting.

"The story has a healing power for people in today's fast-paced society," said Bai. "There are many similarities between Zheng and me. We both look cold and distant, but we have a great passion inside."

Actor Huang Xuan, whose credits include the films "Blind Massage" and "Legend of the Demon Cat," plays Zhang the doorman in the series. He spent two weeks working and living as a hotel doorman. He lived in a shabby rental apartment and rode a bicycle to the hotel every day.

Huang, a native of Lanzhou, Gansu Province, said that he had similar experiences with the character because both of them are "Beijing drifters." He said he could understand Zhang's confusion and struggle to achieve his dreams under great life pressure.

"This is the first time that I am doing a comedy," Huang added. "Every ordinary person has his own extraordinary."

Huang is eager to try on different roles on the screen. According to him, a good actor should have a rich imagination, sensitivity toward life and the capability to interpret all kinds of stories.