A new version of Kunqu Opera classic to be staged 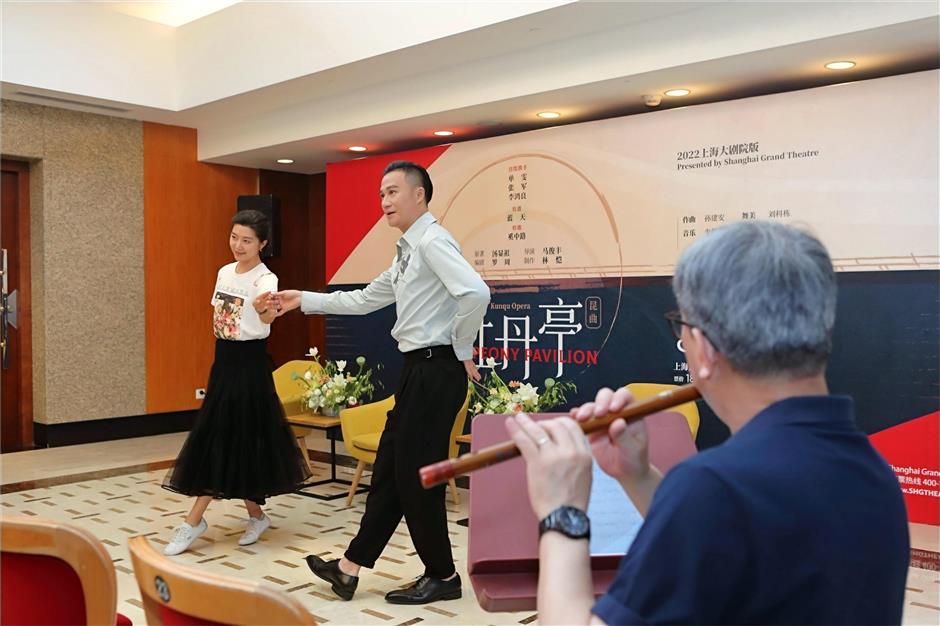 Shan Wen (left) and Zhang Jun (center) will cooperate for the first time in the new version of "The Peony Pavilion."

"The Peony Pavilion" is back, this time with a new interpretation.

The newly adapted Kunqu Opera classic will be staged at the Shanghai Grand Theater from August 10 to 14.

The new version of Tang Xianzu's classic play, dating back to the Ming Dynasty (1368-1644), will differ substantially from its earlier focus on the "essential edition, youth edition, and garden edition" of the famous love story.

Tang, revered in China as the Shakespeare of the Orient, finished writing the play in 1598. In its original form, it had a total of 55 acts that took a whopping 22 hours to perform. It is Tang's greatest work and is known for its elegance, lyricism, and surreal romanticism based on Oriental aesthetics.

The play revolves around Du Liniang, a woman from an aristocratic family, and her romantic obsession with Liu Mengmei, a poor scholar, and transcends the boundaries of time and space, life and death.

The latest edition is directed by Ma Junfeng, with respected Kunqu stars Zhang Jun and Shan Wen in the lead.

Shanghai-born Zhang was honored as a UNESCO Artist for Peace in 2011 and is widely known as the "Prince of Kunqu Opera." He has been engaged in the preservation and innovation of the age-old art form with original works like "Blossoms On A Spring Moonlit Night."

It is the first time Zhang is cooperating with Shan, who has to her credit the coveted Plum Blossom Prize, the highest theatrical award in China.

"I have starred in several editions of 'The Peony Pavilion,' but this edition is quite different and interesting," said Zhang. "It has an obscure and intricate timeline that invites the audience to explore and feel the unknown charms of the story."

Zhang had dropped 5kg in 45 days for the role. He hopes to lose another 5kg before the premiere on August 10.

Director Ma was teaming up again with talented scriptwriter Luo Zhou after the success of the "Six Chapters of A Floating Life."

According to Ma, Luo spotted several "hidden clues" from the original text that allowed them to deliver a bold and creative interpretation.

﻿
Special Reports
﻿
A new version of Kunqu Opera classic to be staged
Epic series looks back on the liberation of Shanghai
Low-budget martial arts film wins over the Internet audience
Choices galore for moviegoers as cinemas reopen in Shanghai
Finally! Local theatergoers can return to Dramatic Arts Center
Concert hall comes back to life with the sound of music
Live shows to be back in July, but with a 50% audience limit
'Second Life' depicts ordinary people in unexpected situations
'The Story of Xingfu' finds a TV audience
'China on Stage' doco series strikes a chord with local viewers
EXPLORE SHINE