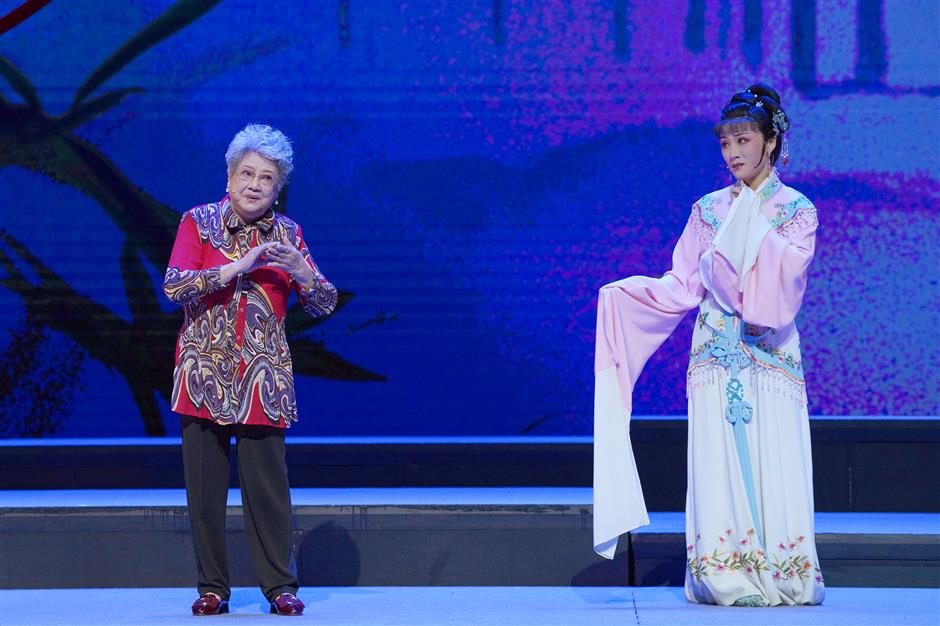 Meng Liying (left), 89-year-old Yueju Opera artist and apprentice of Wang Wenjuan, sings a song about Sister Lin that she and Wang rehearsed over 60 years ago in Shanghai.

Shanghai Yueju Opera Company is staging a series of performances at Wanping Theater to commemorate celebrated Yueju Opera performer Wang Wenjuan, who passed away at the age of 95 in Shanghai last year.

Through September 23, Wang's representative plays and songs such as "Legend of Chunxiang" and "Legend of Meng Lijun" will be performed by her apprentices and talented young Yueju Opera artists such as Li Xudan and Yang Tingna.

Founder of the Wang vocal style and a representative inheritor of the intangible cultural heritage of Yueju Opera, Wang performed more than 200 roles on stage throughout her career.

She is most famous for her in-depth depiction of Lin Daiyu, better known as Sister Lin, in the 1962 Yueju Opera film "A Dream of Red Mansions." Starring Xu Yulan and Wang Wenjuan, the film was a box office sensation in the 1960s and 1970s, reaping about 200 million yuan (US$28.5 million) at the box office and attracting 1.2 billion viewers.

At Tuesday's Yueju Opera concert, Wang's life and artistic achievements were narrated by Ouyang Fenqiang, the leading actor in the popular 1987 TV series "A Dream of Red Mansions." He recalled how Wang's superb acting has impressed generations of people and influenced younger performers in the country.

Yueju Opera artist Meng Liying, 89, an apprentice of Wang, sang a song about Sister Lin that she and Wang rehearsed more than 60 years ago in Shanghai.

"Perhaps it's my last stage experience because of my age," said Meng. "The performance is a tribute to my teacher. This is one of her favorite songs as it depicted Lin's delicate emotional changes and her new understanding of the cruelty of the feudal family. I can still remember her devotion to art."

"Legend of Chunxiang," to be staged on Thursday, marks the friendship and cultural exchange between China and North Korea.

In 1953, Wang and her partner Xu Yulan were enchanted by the touching love story of "Chunxiang," a North Korean drama. They decided to adapt it into a Yueju Opera play.

One year later when the play debuted, it was very successful. Former premier Zhou Enlai met with Wang and other performers in the backstage area in 1955. In the 1950s and 1960s, the play was performed to a wide North Korean audience.

"Legend of Meng Lijun" will be performed on Friday. It centers on a versatile woman's attempts to rescue her finances after disguising herself as a man. The original version of the comedy was staged by Wang in 1980 and received several awards.