Marcelino is calling to her, but Cecilia cannot be with him. Not yet. He may be handsome, but she has suffered a lot and isn’t ready for a relationship.

This is not a soap opera. It is just the way things go in a Brazilian refuge for abused and depressed chimpanzees.

Cecilia, 20, sits on a rooftop and gazes wistfully around — perhaps remembering her childhood spent in a cramped zoo, or her two friends who died there.

Luckily she is now in the best place to have her depression treated: the Sorocaba Great Primates Sanctuary.

She is alone in her enclosure in plenty of space, it beats being in a zoo. And her carers say she is slowly getting better.

Cecilia came to Sorocaba four months ago from Mendoza in Argentina, after making legal history in a case brought by animal rights groups. The judge ruled Cecilia was being held in unsuitable conditions at the Mendoza zoo and should be transferred to Sao Paulo.

In her ruling, the judge defined Cecilia as “a non-human subject of law.” Though she is a chimp, the law applied to her as it would to a person. Experts say she was the first ape ever to be transferred to a sanctuary under such a legal ruling.

Cecilia had spent her whole life in a zoo, deprived of roaming free in the wild. Above all, she was lonely: heartbroken by the deaths of Charly and Xuxa, her two lifetime chimp companions.

“When she arrived here she had no physical problems but she was very depressed,” said Camila Gentille, a veterinary at the sanctuary. “She used to spend all her time lying down and did not interact with anyone.”

Now Cecilia is starting to eat better and even looks over and replies when Marcelino calls to her from his nearby enclosure, as she sits on her perch. 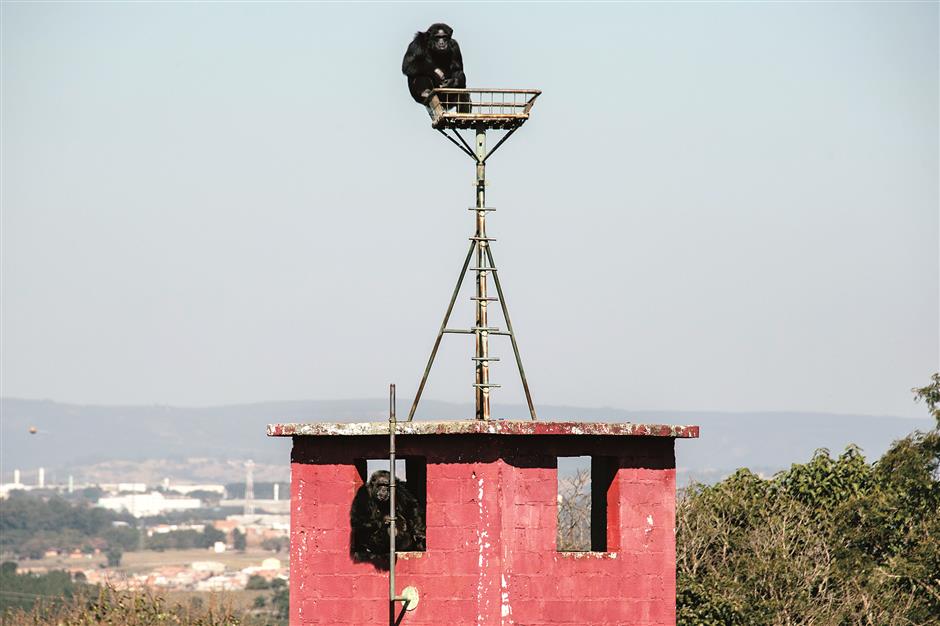 Chimpanzees play at the Great Apes Project, a sanctuary for apes in Sorocaba, some 100 kilometers west of Sao Paulo, Brazil.

In Sorocaba, Cecilia shares a 500,000-square-meter refuge of trees, grass and enclosures with about 50 other chimps, as well as hundreds of other animals such as lions and bears.

A staff of 30 tend to them. Some of the apes receive medication to stop them mutilating themselves. But they also benefit from emotional support.

“It is very important to talk to them so they don’t feel lonely,” said Merivan Miranda, one of the carers. “So that they know there is someone there who understands them.”

One of the chimps, Jango, gives a broad but toothless smile when the director of the sanctuary, Pedro Ynterian, approaches. Jango was castrated and had his teeth pulled out by his former keepers. He came to the sanctuary in 2003.

“These animals were abused in circuses and zoos, and taken by traffickers who made money out of them,” Ynterian said. “They need a place where they will be treated decently, without visits by the public, that is not a zoo. This is the only such place in Latin America.”

Chimpanzees are seen at the Great Apes Project (GAP), a sanctuary for apes in Sorocaba, some 100km west of Sao Paulo, Brazil, on July 28, 2017.

Now this Cuban microbiologist fights for the animals. He joined up with the Great Ape Project, an international association which targets mistreatment in circuses and zoos.

“I’ve had some serious problems,” he said. “People even tried to kill me a few years ago, because there’s a lot of money involved in the market in animals.”

Staff at the refuge had initially tried to pair Cecilia off with a chimp named Billy, but he turned out to be too impulsive for her. They hope she will have better luck with Marcelino.

He shares an enclosure with his family, but is not getting on with his father. It is time he found himself a nice girl-chimp and moved out.