Taking on the men in kitchen 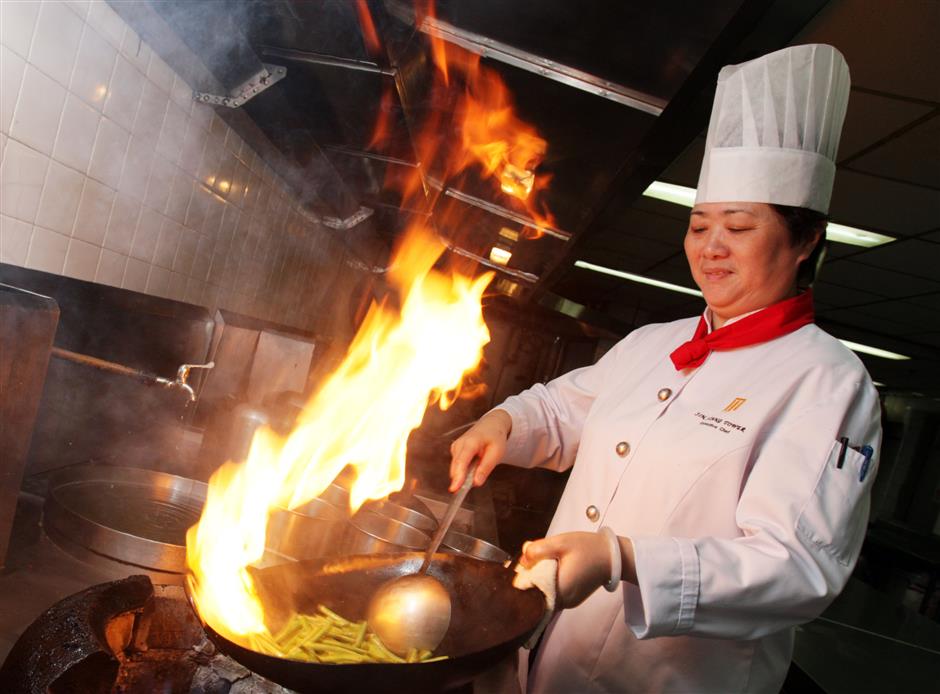 Yan Huiqin is credited for breaking the century-long dominance of male executive chefs in Chinese kitchen.

“My dad said my smile will help me convince my shifu (master) to become the first female apprentice in his kitchen,” says Yan, who was declared a “Shanghai Standout” by the city’s Federation of Trade Unions last year.

Yan rose to become one of the most influential banquet chefs in China, working on more than 500 state banquets and entertaining close to 300 state leaders over the past 43 years.

Even after retirement, she is often called in to help with the kitchen preparation for VIPs.

Former Chinese Premier Zhu Rongji was one of Yan’s top guests. “He was able to tell, even with his eyes closed, that the dish was cooked by me. He said my cooking had a distinctive guoqi (literally “wok’s aroma”), which I think comes from my culinary tour de force,” says Yan.

Few chefs could “play” the wok as skillfully as her. She would hold the wok in hand, flip it up and down, turn it left and right, with the fire at different angles to control the heating, which gave the dishes its texture, smell and flavor.

Zhu’s favorite was Yan’s soup, which tasted as clean as tea yet was rich enough to enjoy its special sensation.

Former French President Jacques Rene Chirac also loved Yan’s soup. She clearly remembers the day she prepared the soup for Chirac — May 17, 1997 — in her hotel. Finely cut seasonal bamboo shoots and shark's fin, along with shrimp meat paste floated beautifully on the soup like a blossoming flower.

Chirac was so impressed that he asked to meet the chef. He was surprised to see a female chef.

“He came up and kissed me on the cheek. I was so shy and escaped his second kiss. Chinese people were quite conservative back then,” Yan now says with a smile.

Soup plays a key role in Cantonese cuisine, which was Yan’s culinary foundation. She learned cooking from master chef Xiao Liangchu, who was the first executive chef at Jin Jiang Hotel.

Xiao was also Premier Zhou Enlai’s favorite chef. Xiao made his name in 1961 when he cooked eight-treasure chicken roasted in salt at the Geneva Conference to help the Chinese state leaders entertain foreign diplomats. 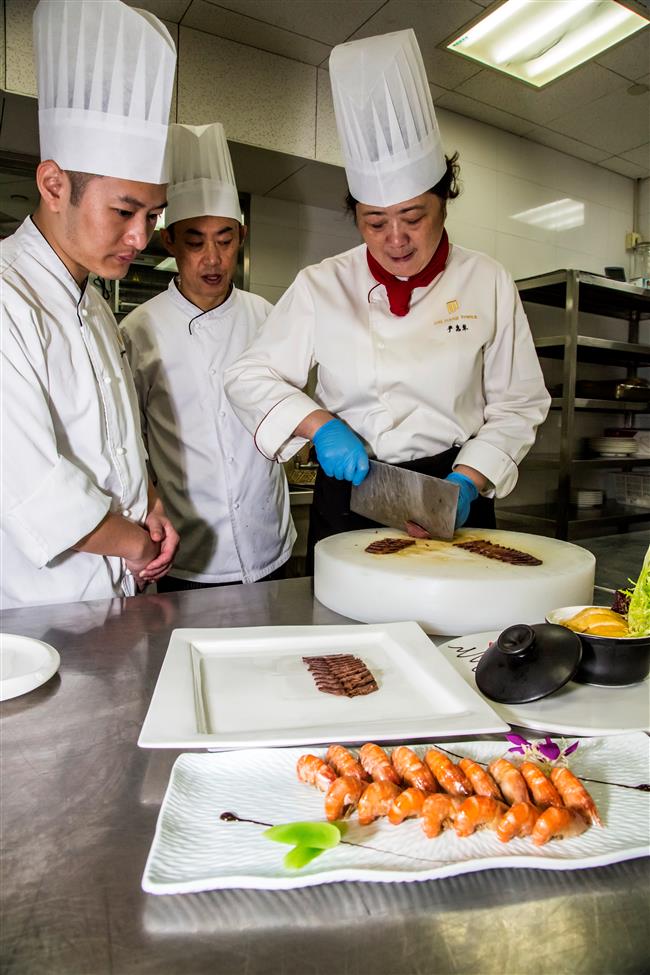 Yan remembers the day way back in 1974, when she kowtowed to chef Xiao after signing as his apprentice in the presence of her parents and the hotel management.

Xiao was uncomfortable at the beginning as Chinese kitchen was very labor-intensive for women, who, he felt, would struggle to achieve a life-and-work balance.

Generally, a chef has to work without air-conditioning in the kitchen, where the temperature soars to as high as 50 degrees Celsius.

Yan, too, did not want to be a chef either. She started her career at the age of 20 as a receptionist in Jin Jiang Hotel. However, her father, who was a director in a factory, pushed for a change as he believed that a receptionist’s job relied solely on good looks, which is not long-lasting.

“My first job was in the pastry department, but I was always curious about my mysterious shifu, who always cooked for big names like Deng Xiaoping and Peng Dehuai (a prominent military leader and China's defense minister from 1954 to 1959). I wanted to be like him,” says Yan.

To convince Xiao to accept her as an apprentice, Yan volunteered to clean the kitchen every day, washing dishes and pots, cleaning the stove, mopping the floor and even cleaning the windows.

Xiao, practicing traditional Chinese-style mentorship, did not teach Yan any culinary technique in the first three years. It is because most Chinese craftsmen believed if their apprentice learned all their skills quickly, they would not be competitive anymore. 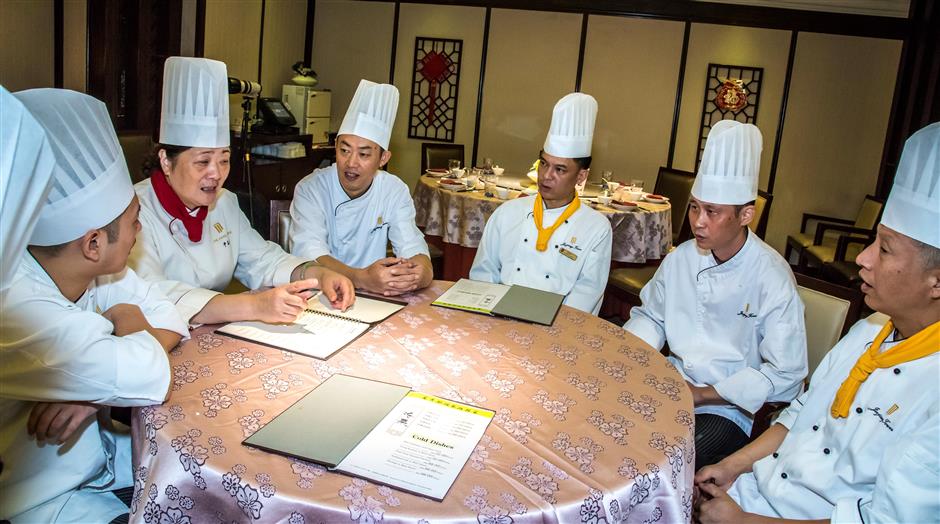 Yan Huiqin (second from left) discusses work with her apprentices and colleagues.

Yan did all the things in the kitchen except cooking.

“I could remove the bones from a chicken or a duck without removing its skin within a minute!” says Yan proudly.

She had to study on her own, secretly observing Xiao at work. However, she was never disheartened.

“Those years cultivated my multi-tasking ability and made me familiar with every detail in the kitchen, even the whole system of the hotel, which helped me later in dealing with various challenges during state banquets.”

Yan recalls the biggest challenge in her life on May 28, 1998, when the Shanghai government hosted then Israeli Premier Benjamin Netanyahu (during his first term) at Jin Jiang Hotel.

It was a big banquet of about 180 people. Yan designed the menu, which had been approved by the Israeli side.

But just when the first appetizer was being served, the Israeli ambassador rather unexpectedly said that the premier had been in China for nine days and would prefer vegetables.

“All the team was shocked. I didn’t have any vegan backup plan and had to prepare a new menu within 40 minutes,” recalls Yan.

Thinking quickly, she decided to serve the hot vegetable dish from the original menu to save time.

“Luckily, the matsutake in the fridge was enough to serve 180 guests. I mobilized the hotel resources to make new dishes, highlighted by a beautiful matsutake soup,” says Yan.

The banquet ended up with Netanyahu complimenting that “today’s dishes were the most beautiful of my China trip.”

Yan is beginning to enjoy her retired life. She regularly flies overseas to communicate with foreign chefs, which enlightens her and has opened up a whole new world for her. She is also the guest professor at Le Cordon Blue, Los Angeles.

In Japan she was impressed by a soba dish that was soaked in sesame and peanut paste as thin as soup. Yan created tossed soba soaked in thick sesame soup topped with cod.

“Those Italian chefs were amazed by my soup. Unfortunately, I can only speak and read little English. Otherwise, I could explore a bigger and more exciting culinary world,” says Yan. 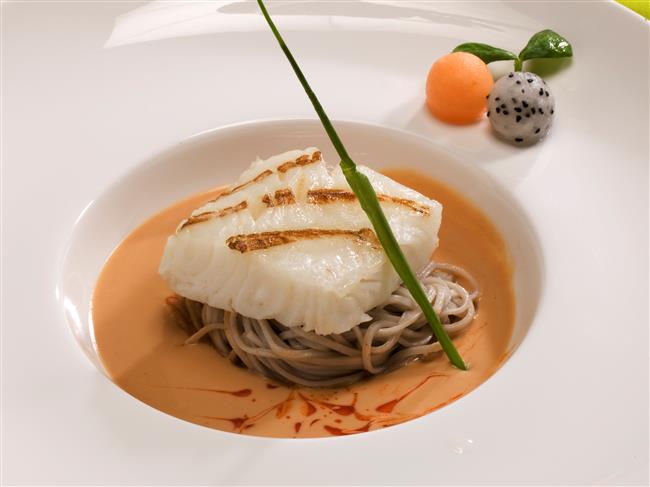