The Rothens: Shanghai was the cherry on the top

Most of the time after I put forward a question, Peter would pause, turning to gently look at his wife Gerlind, and wait for her to answer first. After that, he felt as if it was his turn.

That’s the way Mr. Rothen shows his love and respect to Mrs. Rothen, while Gerlind had another way. She directly stated Peter’s possible answers in hers. Of course, most of the time, she was spot-on.

Just two days after the interview, the Rothens would fly back to Germany, ending not only their three-year posting in Shanghai, but also their official working lives. Having devoted 35 years in the German foreign service, Peter is set to retire.

When I first met Peter in a lecture of "Explore Shanghai Heritage" at the Residence of the German Consul General, the host told me the big news: “I have some ideas about what I will do later, but it’s a secret right now,” he said with a cheeky look on his face. “I will tell you next time we meet.”

Peter agreed to my interview, together with his wife. But it was really a tough job waiting for him to verify the time. Finally it was all set, after waiting almost four hours for him at his Farewell Party.

It was worth the wait! I hope this piece will be a good farewell gift for the Rothens.

P.S. Hi Peter, if you're reading this, remember to let me know what you are planning — I’m still waiting for your secret! 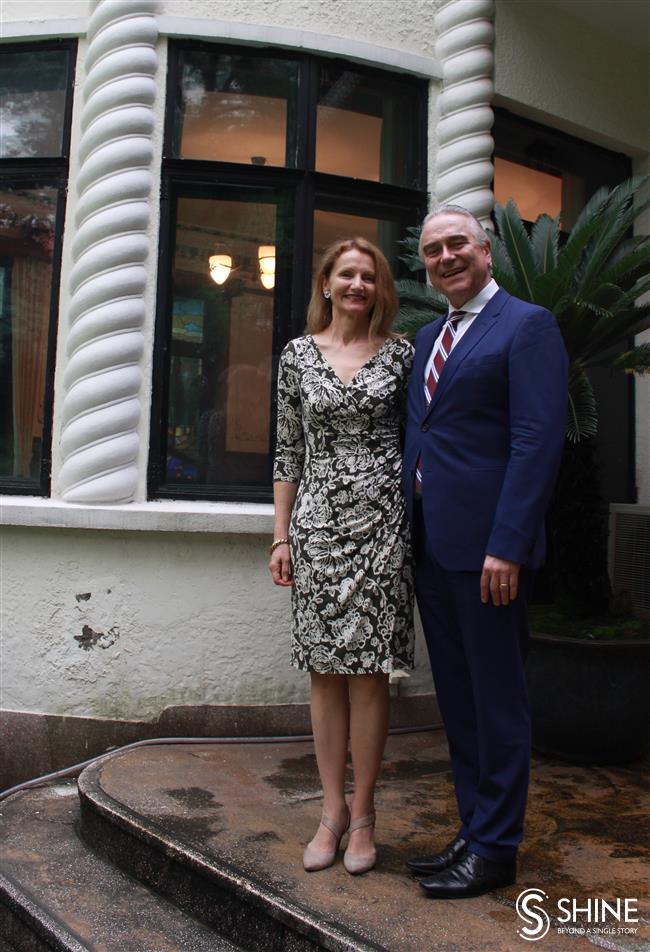 Holin: Do you have some interesting stories about Shanghai from the past three years?

Gerlind: Our first impression and a very good memory for us when we came to Shanghai, was after two or three days that we had spent in the hotel mostly.

We walked from the hotel on Nanjing Road to our residence here on Yongfu Road, and everything still was very strange to us — this was our first time in China even, so we didn’t know what to expect.

We heard some wonderful music on the little park that is at the crossing between Huaihai Road and Fuxing Road. It is a small park but people are always gathering there, and we heard some incredibly good jazz music, especially my husband is a great jazz lover, and we were impressed about the music we heard on the street. And we listened for a while and I even took a little video clip because it was so good — it was a trumpeter and a bass player. When they had finished playing, we approached them and we asked them whether they were professional musicians and whether we could hire them for a future reception at the consulate.

And they were very cool, they said that they play at the JZ Club. And later on, when we went to the JZ Club one evening, we found out that the one musician who played the bass was Ren Yuqing. He is the founder, the owner of JZ. The trumpeter was probably the best jazz trumpeter.

This is quite memorable because they don’t always play on the street. They did it for fun, once, and we saw them. And we became friends with them and I cannot tell you how often we’ve been to their club — it’s one of our favorite places we go to to relax in the evening after our commitments.

Peter: And that happened in the first week, on day two or three, so we immediately had such a good start with Shanghai, that’s the story.

Holin: From your talk, I can guess walking may be one of your ways to spend your leisure time. But I still want more personal answers. So, may I ask this: how do you spend your weekends here?

Peter: Well, with weekends it’s a bit of a problem for us because we don’t have a regular weekend, we have very many commitments also on a Saturday or on a Sunday.

Gerlind: Our leisure time is very little but when we do, we like to go for walks on the Huangpu River, and the West Bund. We’re very fond of just getting some exercises and seeing the skyline — it’s a different way of seeing Shanghai, seeing the boats pass. And we love to go to the museums as well. Our favorite museum is the SCoP (Shanghai Center of Photography) on the West Bund, and the other is Yuz Museum.

Peter: And I like also China Art Museum. So leisure for us means to have quiet time when we are together with the two of us, because during the week we meet so many people, we go to so many events which are all interesting and fun, but leisure time for us is to have some quiet moments; take a walk, or go to a museum.

Holin: Which place in Shanghai do you like best? And why?

Peter: Yes for me, to drive in the car, it’s Yan’an Elevated Road, the big east-west axis. That’s my favorite!

Gerlind: Because he can see all the buildings and Shanghai Exhibition Center when you drive past, and the skyline.

Peter: Of course, when you go in the car. We drive in Shanghai, and I like it because it’s a beautiful road and you can advance without stopping at traffic lights and you have the view from on top, you can see a lot. I like very much driving on that road.

But I also like to walk along the Bund, along the river, but most of the time there are very many people. Sometimes when it’s not so crowded, in the winter or so, I like to take a walk there. And I like, also, that central part of Lujiazui when you come out of the tunnel, and you go past the TV tower, and you go to the three high-rises, I love to look at them and to look up. That’s so special for Shanghai. You can have high-rises in many cities, but these super high-rises and this elevated pedestrian walkway — that is very special for Shanghai. It’s very elegant and very nice to walk there and look at these wonderful buildings. 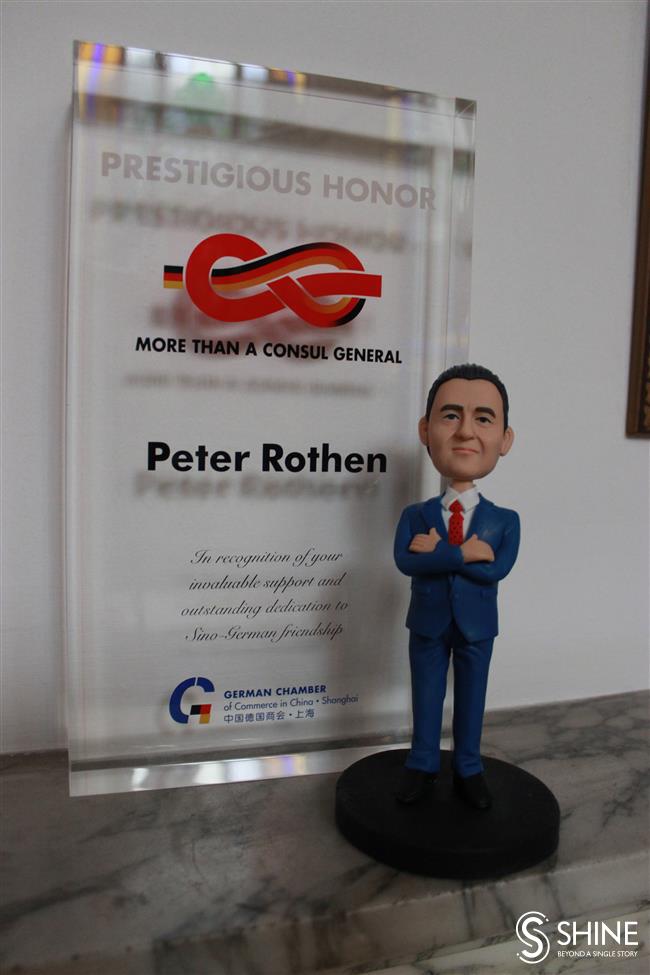 Peter Rothen's clay model sits next to an award.

Holin: What do you love most about Shanghai?

Gerlind: What I love most about Shanghai is the hustle and bustle on the streets. When I go to markets to go shopping, there are bicycles and people and carts and some people are selling things, some people are making things. After three years I know these people, they are there every day. Someone making food or making dumplings and the flower people, there’s one man who always sells the same flowers. Everyone is busy and at first you think it’s chaotic, but it’s not. You just have to go along with it. These streets, it’s not just cars or the Metro, I like it when there are lots of people and they are always busy.

Peter: What I like so much about Shanghai is this wonderful blending of eastern and western influences. There’s no other city like that in China or Asia or Europe, and that is one of the things that makes Shanghai so unique. It’s not just the Bund; it’s all over the place. For example here in the former French Concession, you have wonderful buildings here from the 1920s and 1930s. You can see the Western influence but it’s special, you can see the Chinese too. I think Shanghai people are particularly open to other influences because they have lived with that for such a long time. And I like the traffic in Shanghai, it’s like a ballet. In the beginning when we came we thought it was chaos and we could never drive here, but when you get used to it, it all works very well. People look out for each other and it’s amazing how it works. Now I’m very fond of this very special way how the Shanghainese manage to get through.

Holin: Now the opposite question: what do you hate about Shanghai?

Peter: The thing I hate about Shanghai is that I have to leave it.

Gerlind: Nothing else to hate. There is nothing that we hate. There are things that are not so good, sometimes the air can be a problem but there are good days too. Mosquitoes can be a problem and maybe sometimes what we experience is there’s a lot of construction, which is impressive, but it goes on day and night. It goes on all the time. My husband likes that because it shows that people are working hard and there’s progress. People here are extremely friendly; they’re fun; it’s a young city; it’s all very exciting. It’s a wonderful place to have a posting for us. It’s really been very exciting. 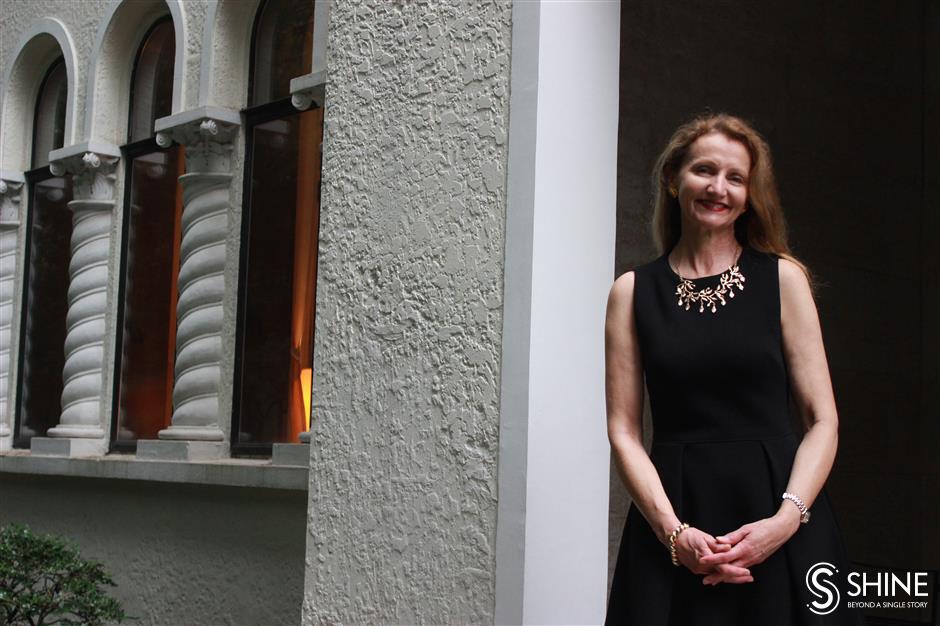 Gerlind Rothen smiles to the camera at the Residence of the German Consul General in Shanghai.

Holin: Do you have any impressive memories from your life?

Peter: Oh, so many. So many I’ve forgotten them!

Gerlind: We’ve met many interesting people, very interesting people. Meeting the director of the propaganda poster museum (Shanghai Propaganda Poster Art Center), who told the story of his life; how he started collecting posters as a young boy and keeping a private collection. Although it’s still a small, private museum, apparently it’s number two on TripAdvisor (a popular travel website) for museums in Shanghai. It has a very personal story for him to tell, but also from an artistic and historic and political point of view, it’s a very interesting collection. For us it was an eye-opener to see that this kind of collection also has its place in Shanghai history.

Peter: One thing that comes to my mind is that I have never stopped being impressed since I came here that so many Chinese, with whom we are in contact, that they have very good knowledge of German — many learn German and speak it very well. We know, of course, particularly people who have some connection to Germany, but very many Chinese speak very well German and know a lot about Germany and really like Germany a lot, which is something that one doesn’t find so often, that people are really very positive about our country. That’s another of the very many good impressions and memories that we will take back home, that we have so many good friends here.

We will definitely take a good break, but we will not, from now on, just do nothing. We will have to look at several options and see what we will do in the future, but we both still feel very energetic and inspired by the great experiences and impressions that we have been able to collect during our professional life, so we will figure something out which will, again, give us something nice to do where we can use these experiences. That’s it.