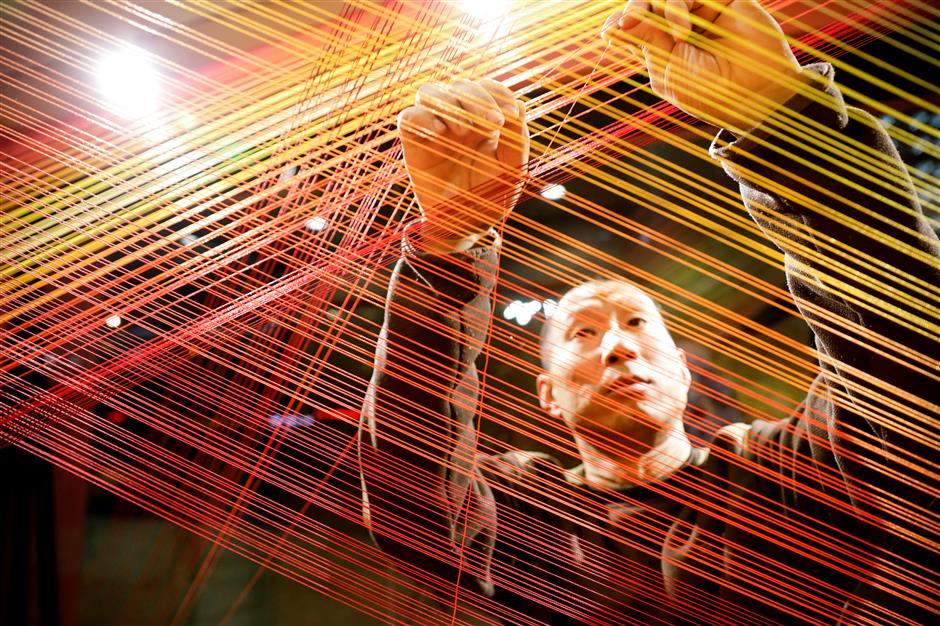 Department stores in Xujiahui area are more than just a place for shopping and dining. Here you can find light installations, handicrafts and performance art in a store corner or in a window display.

As the year-end show in Xuhui District’s “Art in Stores” project draws to a close, four department stores within the Xujiahui commercial circle have joined hands to put up an exhibition titled “Artistic Narration: A Century of Xujiahui” in their display windows.

Each of the window tells a piece of Xujiahui history over the last century, covering architecture, education and the development of different industries that originated in Xujiahui area, such as films, gramophones and stained glass art.

“We started planning this window show in September when I took the nine artists on a one-day tour around all the historical landmarks in Xujiahui,” says Su Bing, curator of the “Artistic Narration” show.

Inspired by the life story of Ming Dynasty scholar Xu Guangxi, who translated the six-volume “Principles of Geometry,” followed by “Principles of Surveying” and “Principles of Pythagorean Trigonometry,” from Latin to Chinese in the 17th century, artist Gu Benchi came up with the work “Flow of Light,” which is made up of a group of light patterns of silk threads.

“It represents the beauty of reasoning when modern science came to shine on Xujiahui, a place named after Xu Guangqi,” Gu says about his work.

“One thing that is in common between the beauty of commerce and art is that both reveal the vigor and creativity of the place where they originate,” Gu adds.

“Flow of Light” is on show in the front window at the gate of the Huijin Department Store. 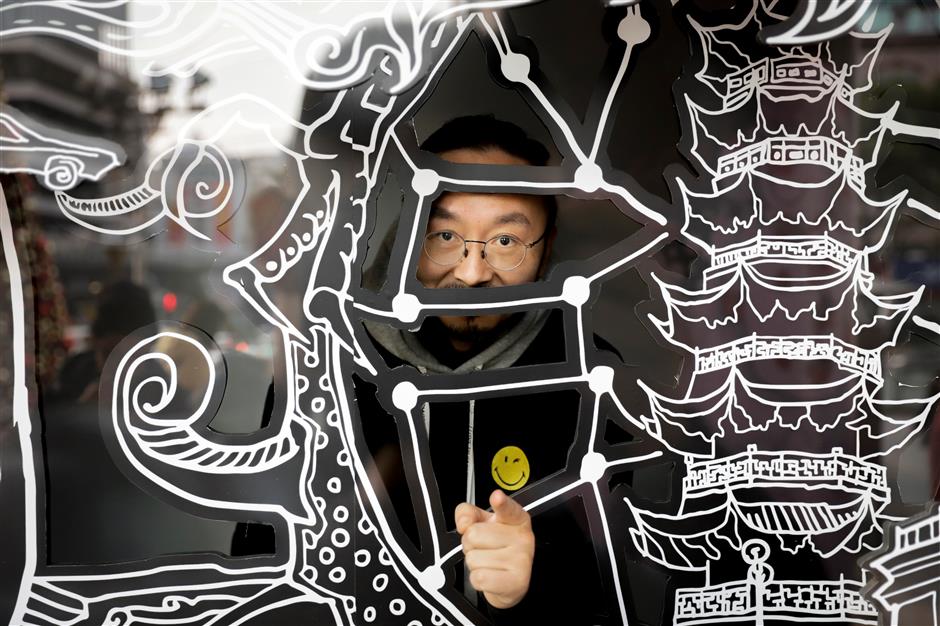 “Happy Land” by artist Zhu Jingyi is a creative paper-cutting work featuring some of the most prominent historical buildings in Xujiahui.

Echoing Gu’s work is “Happy Land” by artist Zhu Jingyi, presented on the other side of the gate. This creative paper-cutting work features some of the most prominent historical buildings in Xujiahui, such as the cathedral, observatory, library and the art workshops in the Tushanwan Orphanage.

This all resulted from a meeting in 1872 in Xujiahui by the Jiangnan Society of Jesus, which put forward a plan to develop the area into “the largest cultural complex in the Far East.”

“For centuries, Shanghai has opened its arms to both local and foreign cultures. The architectural styles in Xujiahui area reflect Shanghai's unique East-meets-West characteristics,” says Zhu.

Graphic designers Zhou Chuan and Zhou Qi are twin brothers. Their work “Discs and Circles,” displayed in a window at Buynow Electronics, uses the round patterns in their design to stir up interest in the development of music recording and meteorology in the history of Xujiahui.

“We live in such a fast-paced world where nothing stays the same for long. Art makes history come to life,” say the brothers.

In addition to the music recording industry, Shanghai is also the birthplace of Chinese cinema. As a former special effects technician from the Shanghai Film Studio, artist Cai Yong’s work “Dream Sky” takes up a side window at the Pacific Department Store facing Huashan Road.

“My inspiration came from life. As shopping has been part of our daily life, doing art in stores, for me, is like a return to life. I presented some vintage film reel boxes in the window, each of which snatched a moment from the 100-year history of modern Chinese cinema,” he says. 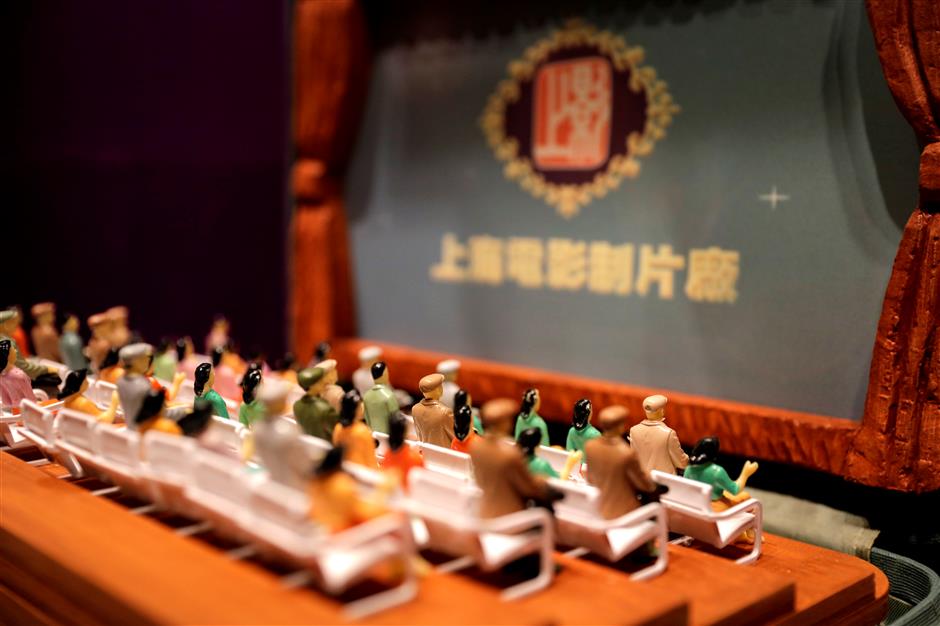 According to Qin, techniques of making stained glass have been developing rapidly in China these days.

“However, the workshops at Tushanwan Orphanage in Xujiahui first introduced the Western art of making stained glass to Shanghai,” he says.

With the works “Glass Art,” Qin and his students presented at the side window of the Oriental Department Store a dialogue between Chinese traditional painting techniques and modern glass-making technology.

Also on display, to the left of the stained glass window, is Gu Yi’s work “Layers of Industrial History” which traces the industrial heritage in Xujiahui, which can be seen as a miniature history of Shanghai’s urban development. 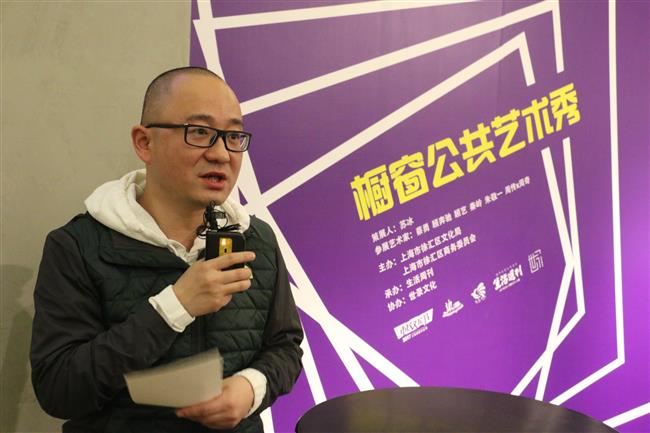 Su Bing, curator of “Artistic Narration: A Century of Xujiahui”

Born in Shanghai in 1973, Su Bing first opened a studio in 2003 at M50 (50 Moganshan Road), an art hub for independent artists from home and abroad. As a curator, he has been working in several crossover projects among art, design and installation.

Q: What are the differences between artworks and retail products?

A: Artworks have their market values, like all other commercial retail products. However, they are products of the culture, created through independent thinking of each of the artists and their own experiences in life.

Art, though seemingly a “powerless” force, can change the life we live in today and the future.

Q: What concerns you most when taking on a project such as the window show in the malls?

A: Whether art and culture can integrate into a commercial environment is the key question, because usually art cannot exist in a place that it doesn’t belong to. Whether a window can catch the attention of the passers-by has a lot to do with individual tastes and cultural background and other factors.

Q: What did you do to help the artists reach to a wider audience?

A: To engage audience participation, we used AR technology backstage. By scanning the QR code attached to each of the window, anyone can watch a live video of the artist on what the work is about and how it was created.

Audiences can even upload their selfies in front of the windows and chat with the artists on the site.

Special Reports
ADVERTISEMENT
61799
,
Guide for overseas Chinese students during COVID-19 pandemic
A cemetery that celebrates life and death
Nile threatened by waste, warming, dam
Enchanting abode in idyllic tranquility
Connecting nature, culture and people with design
Fancy footwork: An embroiderer finds her niche
How overseas Shanghainese go through outbreak
Counseling eases psychological toll of outbreak
'Support troops' guard the doors to the city
A guardian of the light ... and of hope for Wuhan
EXPLORE SHINE