Depths of despair, capstone of compassion 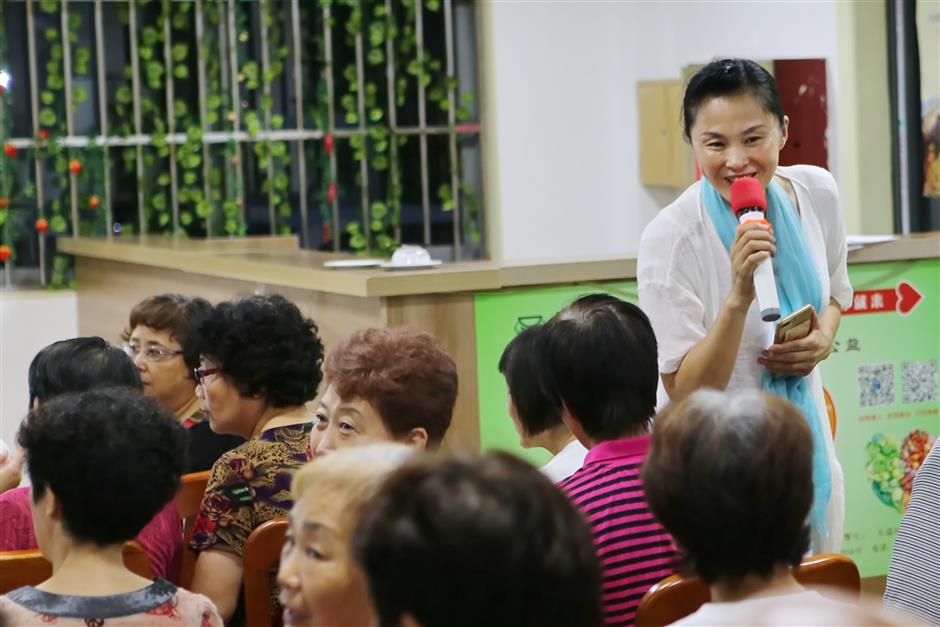 Gu Yixia hosts a social gathering for senior citizens at her restaurant.

Gu Yixia, a native of Anhui Province, used gritty determination to overcome crises in life and catapult herself to a new pinnacle with the creation of her own charity in Shanghai.

Acknowledging her contribution, the Shanghai Civil Affairs Bureau cited Gu’s charity as among the top 10 in the city.

“After all these years, I’ve finally found something that I truly wish to devote myself to,” says Gu. “People often say that I am as energetic as a morning rooster every day. That’s because I am excited about my work.”

Years earlier, Gu was a factory worker at a chemical fiber plant in the Anhui city of Tongling but was laid off because of reforms in the state-owned enterprise.

“At that time, my daughter was little and I needed work to support the family. I couldn’t just be a stay-at-home mom,” she says.

So she turned to her love of cooking and opened a small snack bar in Tongling. Over the next 14 years she expanded, eventually opening 12 restaurants – each one more upscale than the last. By the time she moved to Shanghai in 2011, three of the restaurants were still operating.

She came to Shanghai to take care of her daughter, who was studying at a high school here. But Gu didn’t realize that leaving her hometown would mark such a sharp turning point in her life.

“Not long after I arrived, a friend of mine from Anhui invited me to a dinner party, where one of the guests mentioned that he was looking for someone to take over his restaurant,” Gu says. “So why not me?”

She took over the Tianruixuan restaurant in Jiading District after selling her three restaurants in Tongling and investing nearly all the proceeds in the three-story eatery.

In 2015, Gu read a newspaper story about the lack of facilities providing meals for the elderly.

“Many of the seniors are too old to buy groceries or cook themselves,” she says. “The local neighborhood committee in my area was stumped about what to do.” 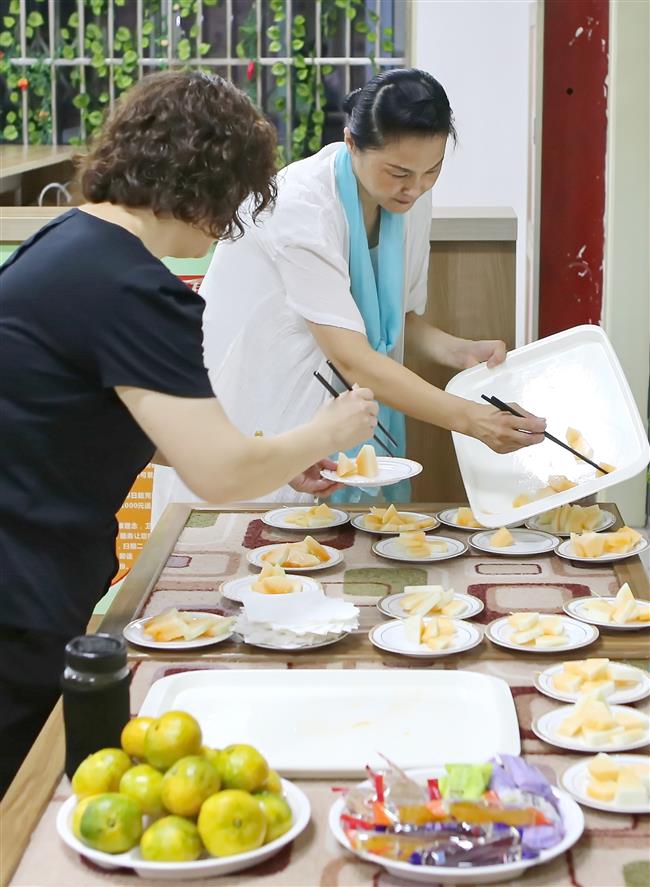 Gu Yixia (right) prepares meals for the elderly in her restaurant kitchen.

So Gu decided to provide meals to seniors. She redecorated the first floor of Tianruixuan and turned it into an affordable cafeteria that promised 1 yuan (15 US cents) of every meal sold there would go toward subsidizing the meal delivery service.

“It was not easy to persuade my chefs to cook ordinary meals rather than banquet dishes,” Gu says. “Some of them left, but the vacancies were soon filled. I recall one chef from a luxury hotel who quit his job to come work for me when he learned about the senior meals project.”

Gu also organized parties to give lonely elderly the chance to get out and socialize a bit.

“Many of them hadn’t been dining out for so long that they were happy like children,” she says. “I realized how much sorrow lay behind those happy smiles. I learned how so many children didn’t have time to spend with their parents and grandparents.”

Just when everything seemed to be going hunky-dory, another crisis hit Gu.

In 2013, the area around Tianruixuan was designated for urban renewal. Although her restaurant was left intact, her customer base disappeared.

At the same time, her husband wanted a divorce and her daughter didn’t perform well on the college entrance examination.

“Suddenly, I seemed to be losing everything,” she says. “I almost suffered a mental breakdown.”

But self-pity wasn’t Gu’s style. She decided to start all over again and make services to seniors a full-time career. She closed the low-cost cafeteria, rented out the second floor of the restaurant and stopped taking customers without advance reservations. 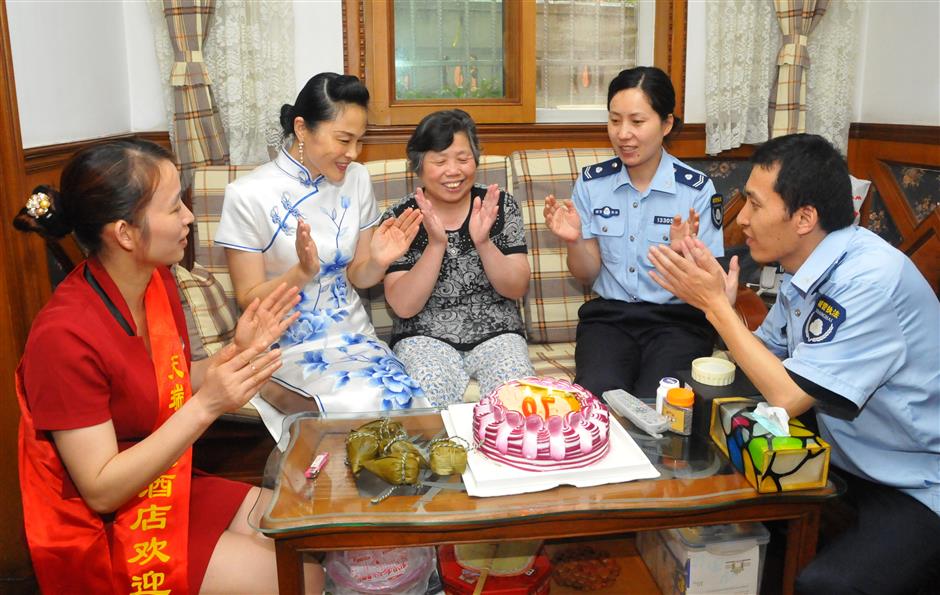 Gu Yixia (second from left) hosts a birthday party for a 70-year-old.

Gu and her finance manager signed up for a course on volunteer work and obtained their social worker certificates, qualifying them to found a nonprofit organization. The name Leshanyuan comes from the transformation. In Chinese, le means “happiness,” shan means “kindness” and yuan means “source.”

“I hope our kindness brings happiness to seniors and forms a bond between people who need help and those willing to provide it,” she says.

After Leshanyuan was founded, Gu invoked all the social connections she had made over the years. People from all walks of life became volunteers. Leshanyuan organized 100 events for seniors, including fashion shows, educational classes and, of course, dinner parties.

“One of our most active volunteers was an old lady I visited when I first came to Shanghai,” Gu says. “She now attends nearly all our events and helps us with organizing work.”

But Gu does not want to rest on her laurels.

“I have invited a team of food-safety experts to develop a system so that seniors can either eat in the canteens or order meals to be delivered to their homes,” she says.

Meanwhile, at Tianruixuan restaurant, a dining hall has been converted into a multipurpose room for volunteer training. The first sessions will start next year.

“I want to go as deep as I can to provide services,” Gu says. “Seniors are and will always be our only target for services.”

She says her passion for helping seniors springs from a sense of guilt after her father suffered a fall and died at home alone.

“My father was always proud of me because I was his first child,” Gu says. “Every time I see the needy seniors, I think of my father and I want them to be happier and live longer.”

Her new career success has been matched with some positive development in her personal life. She has married a swimming coach that she met at one of the senior events.

“My husband doesn’t know much about charity, but he supports me fully,” she says.