Life in the pockets of history 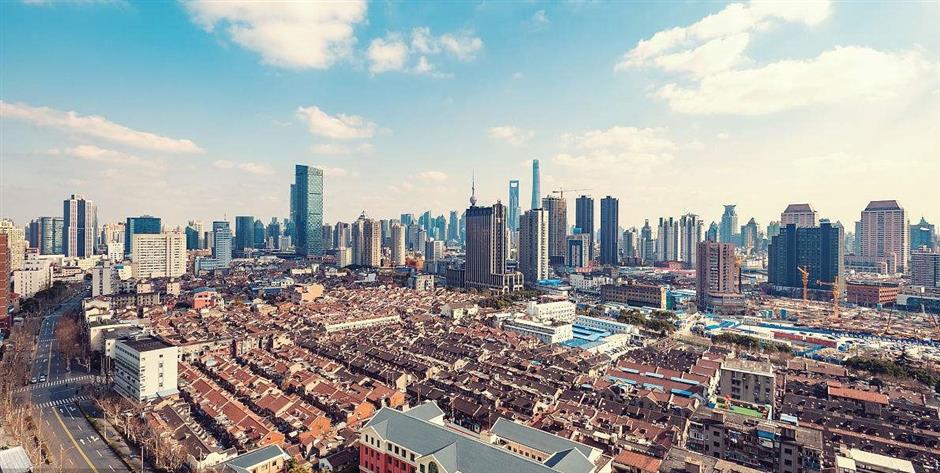 Amid some of the tallest buildings in the world, it’s so easy to overlook old Chinese architecture that still dots parts of Shanghai, adding a charm that ties past to present.

“If we want to find out the original texture of Shanghai, laochengxiang (literally ‘the old city of Shanghai’) is the best place to start,” said Li Yanbo, associate professor of architecture at Tongji University. “It embodies the history of the city and records the shift from a small county in the Qing Dynasty (1644-1911) to today’s Shanghai.”

Taking his advice, I spent a day wandering around the Old Town area. As I walked, I felt the pace of life slowing.

I went to Longmencun, or Dragon Gate Village, which was built in 1935. Located on Shangwen Road in Huangpu District, it is a lilong, or neighborhood of lane houses. This one is unique because it comprises 76 houses of various architectural styles.

Originally, the site housed the Longmen Academy, a high school founded by Ding Richang in 1865. In its time, the school was the premier public high school in Shanghai.

I was taken aback when I saw a cat playing with a mouse it had caught. Elderly residents, apparently used to Tom and Jerry scenes, merely laughed at my momentary distress. 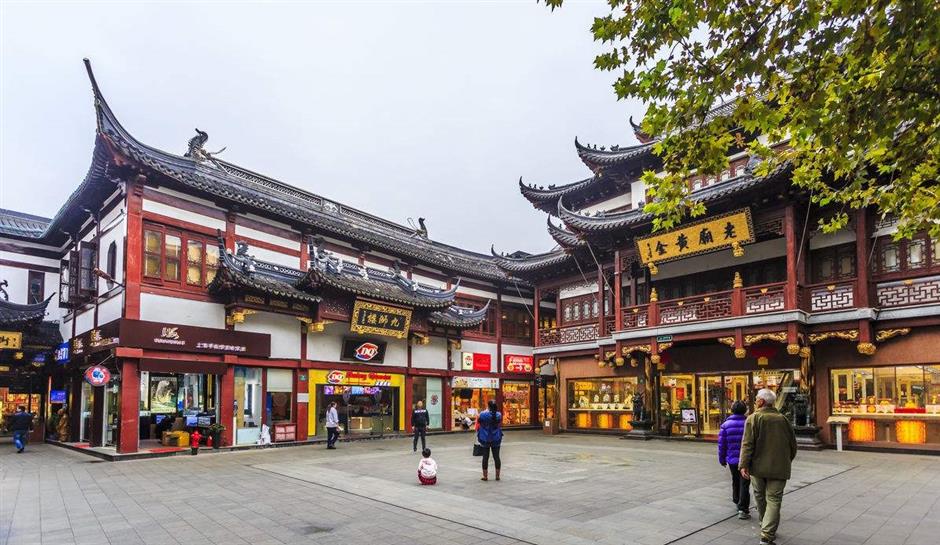 Traditional Chinese buildings in the Old Town area in Shanghai

Deep inside this historical neighborhood, two middle-aged men were arguing over something. They had attracted a group of onlookers who attempted to intervene and settle the dispute. Such intimate neighborhood interaction rarely exists in modern apartment complexes.

It’s hard not to be fascinated by vivid glimpses of daily lives untouched by so much of urban transformation.

At the No. 60 house, I was fascinated by stained-glass windows. Peering through a crack in the wooden door, I saw nothing but weeds inside. The elaborate moldings of the house feature a pair of lions cast in an odd yellow.

“It’s a pity that the previous tenant of the house painted it that color,” an elderly man living across the street told me. “He took it for granted that lions should be golden. It is important to protect these old residences. I hope more young people like you can come to visit.”

The decline has aroused calls for better protection of the city’s architectural legacies.

In terms of the renovation and protection of heritage structures, Shanghai has set a goal of protecting 131 historical streets, renovating 400,000 square meters of dilapidated houses in the central areas and preserving 1 million square meters of traditional Chinese terraced houses.

An array of architectural experts like Li are participating in the regeneration of the old communities in Shanghai.

Liang Sicheng (1901-72), known as the “father of modern Chinese architecture,” wrote in his book “A Pictorial History of Chinese Architecture” that the architecture of China is as old as Chinese civilization.

He defined the principal elements of traditional Chinese architecture as creating an appearance that is unique, beautiful and appealing.

Wood was held up as the key construction material. It implies impermanency in architecture, which reflects the idea of fusion with nature.

Liang also underscored goujia, or the shape of the structural frame, and dougong, or bracket sets, as elements of classic architecture.

To fully understand the architectural icons that remain, we have to look back at their roots. 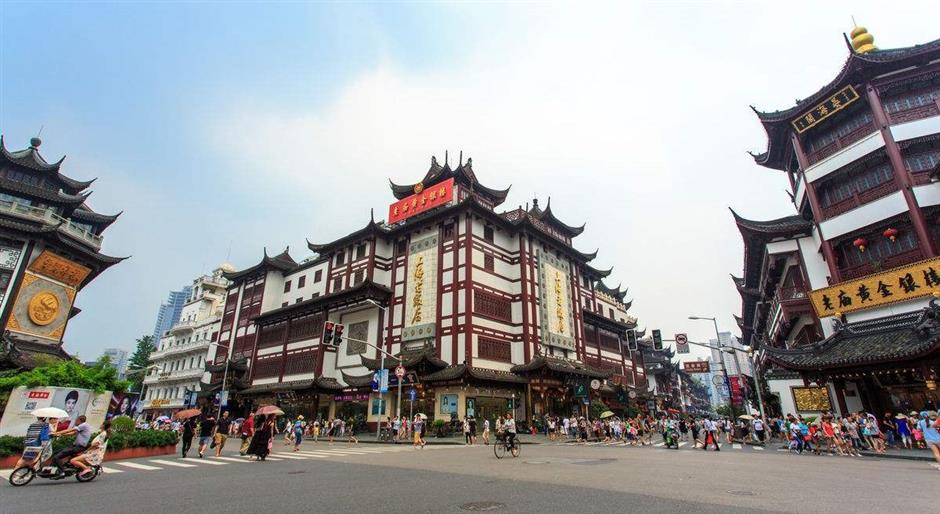 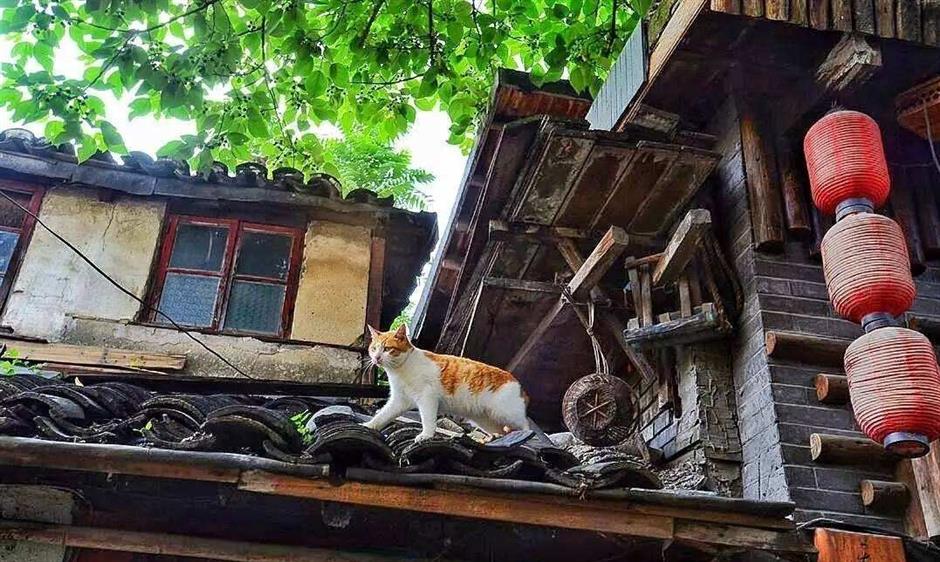 Tiles from buildings of the Qin Dynasty (221-207 BC) were excavated by archeologists in 1935 in Qijiadun Village in suburban Jinshan District.

In the Jin Dynasty (AD 264-420), a fortress was constructed at the mouth of the Wusong River by the East China Sea to guard against pirates. The ruins disappeared as the coastline gradually moved.

Shanghai was established as a town in 1267. In 1292, the government of the Yuan Dynasty (1271-1368) upgraded its status to a county. The first big project was renovating the county school.

The number of lanes and alleyways in Shanghai County numbered 70 in 1514, and 21 new towns sprang up in the county.

Construction techniques improved greatly in the Song Dynasty (960-1279), thanks to the book “Treatise on Architectural Methods” written by Li Jie, a director of buildings and construction. Published in 1103, it provided standards for architects, builders and craftsmen.

In order to defend against Japanese pirates, Zhu Yuanzhang, founder of the Ming Dynasty (1368-1644), dispatched 35,000 builders to construct garrisons and castles in the Shanghai area.

The first city wall, about 4.5 kilometers in circumference and 8 meters in height, was built in 1553, with six gates and three watergates. Fortunately, part of the ancient city wall has been preserved on Dajing Road in downtown Huangpu District.

In the middle of the Ming Dynasty, gardens and guildhalls appeared. The Sanshan Guild Hall on Zhongshan Road S. is the only well-preserved guildhall in Shanghai. It was funded by businessmen in the fruit industry in 1909.

Foreign invasions wreaked havoc on the daily lives of the Chinese, but at the same time opened a floodgate of Western culture to Shanghai.

“Lilong residences changed with the city as it developed,” Li said.

Shunning the dominance of Western styles, a group of Chinese architects who studied abroad began advocating traditional Chinese architecture in the 1930s. One example of that school was Dong Dayou, who designed the administration building of Shanghai University of Sport.

Emphasis on traditional Chinese architectural elements also resurfaced in the 1950s and again in the 1980s. That influence can be seen in the Wenyuan Building, built in 1953, at Tongji University, and the Fangta Garden, designed by Feng Jizhong in 1978, in Songjiang District.

Architecture in Yuanxiang Lake Park in Jiading District expresses a contemporary nod to the Chinese philosophy of architecture. 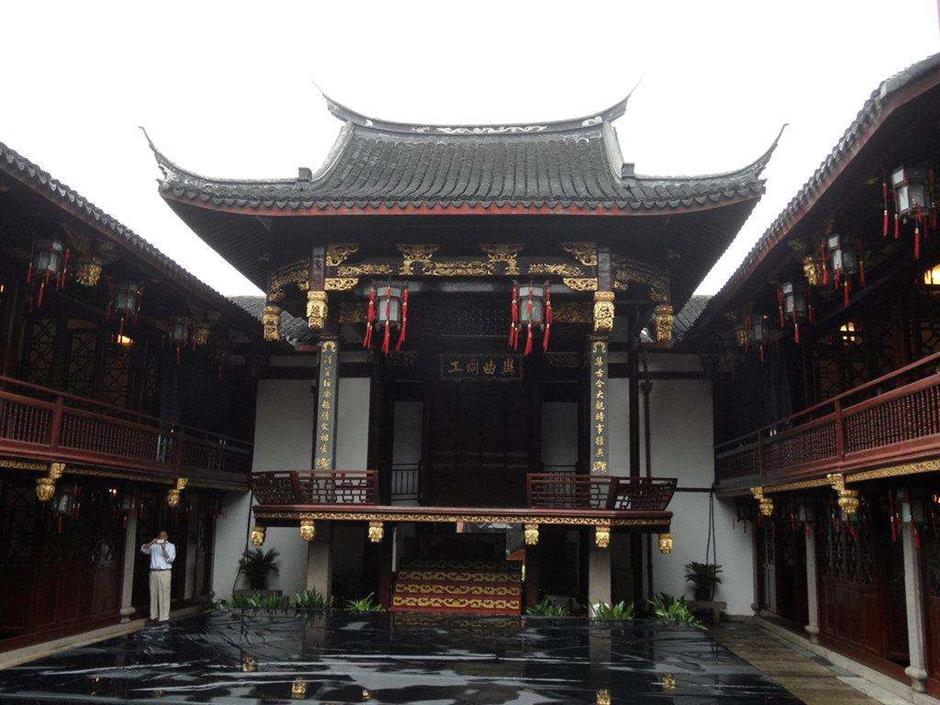 The Sanshan Guild Hall on Zhongshan Road S. is the only well-preserved guildhall in Shanghai.