There are thousands of islands in the South Pacific. Some island groups are independent nations, others are territories or dependencies of the United States, New Zealand, France or the United Kingdom. They are divided into Polynesia, Melanesia and Micronesia.

Micronesians inhabit approximately 2,500 islands that make up the Island States of Kiribati, the Federated States of Micronesia, Palau, Republic of the Marshall Islands, and Northern Mariana Islands and Fiji.

Pacific Islanders live a very social lifestyle, in which family — both immediate and extended — work together in a community. Their cultures follow customs and traditions based on ancient principles that promote living an honorable and noble lifestyle. Embedded deeply into Polynesian culture are traditional music, dance and food.

Cultural storytelling, music, and dance are ancient ways of passing down history from one generation to another.

Seafood, particularly fish, has long been a staple and major source of protein for Pacific Islanders. Nearly 300 varieties of fish are found in the waters of Polynesia.

Root vegetables and tubers, such as taro, sweet potatoes and yams are also central to their diet, along with a wide variety of tropical fruits.

Coconuts are another staple and coconut milk is used in many dishes.

Introduced by Westerners, corned beef and Spam have become very popular throughout the region. Popular beverages include coconut milk and beer.

Pacific Islanders are known for their love of enormous feasts. They hold feasts to celebrate saints’ days, births, marriages and events such as the crowning of a new chief. There are also funeral feasts.

A typical feast might include cooked fish and shellfish and barbecued chicken or pork (or both), along with a wide variety of dishes made from taro, sweet potatoes, yams, bananas, plantains and coconuts.

Mealtime customs vary among the many different ethnic groups of the Pacific Islands. Dinner is the main meal of the day for Tahitians of Chinese and Polynesian descent. However, those of European descent eat their most significant meal at lunchtime.

Pacific Island feasts are gala occasions enjoyed by family, friends or an entire village, accompanied by music. Instead of a table, bowls and baskets of food may be laid out on mats or on a carpet of banana leaves.

Food for feasts is prepared in a special “underground oven,” called a himaa in Tahiti, a lovo in Fiji, and an imu or umu on other islands. It consists of a large pit filled with stones heated over a fire made from dried branches and twigs. The food is wrapped in banana leaves and placed on top of the heated stones. Then it is covered with more layers of banana leaves and other materials to keep the heat in while it cooks.

Sunday dinners and meals for other special occasions are often cooked in these underground ovens. 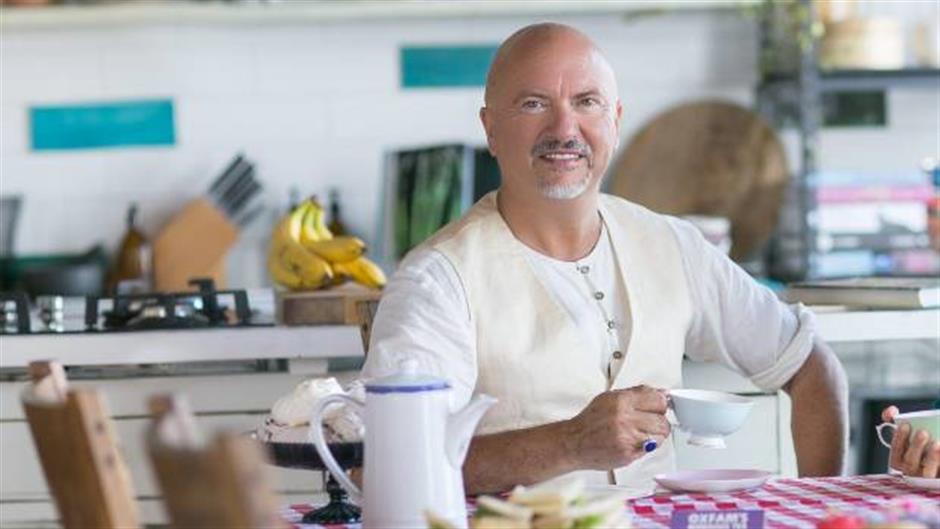 Recently, I had the honor of meeting Robert Oliver, a New Zealand-born chef and author of “Me’a Kai — The Food and Flavours of the South Pacific,” which won the Best Cookbook of the World and France’s Gourmand World Cookbook Award in 2010.

Oliver published his second book, “Mea’ai Samoa” in 2013 at the request of the Samoan prime minister, looking at Samoan dishes and foods.

Oliver was recently in town to present a keynote address at the Shanghai Literary Festival.

“When you sit down to eat, what you see before you is a plate of food,” he started. “I’m going to talk about a way of looking at food, beyond the plate, beyond the recipe.

“This is an approach to food — whose aim is to empower chefs, stimulate national economies, reclaim tradition and health. I call it the power of cuisine.

“I was born in NZ, where shopping was done in dreary, sanitized supermarkets, but had the astonishing good luck to be raised in the Pacific Islands — where locals shopped at the local marketplace in Suva, Fiji — full of laughter, gossip, and endless amazing food.

“We were Immersed in a whole new food culture — and we loved it. It was through this experience that my destiny as a chef was mapped out.”

Later, he traveled to far-flung places like New York and the Caribbean, where he was commissioned to install 21 restaurants in three resorts.

He found all the food for the resorts was imported, in spite of the excellent quality and availability of local ingredients. He was struck with the notion of utilizing local produce instead.

“I worked creating growing contracts with farmers to supply the hotels,” he said. “I had control of the menus and this was the creative glue that connected agriculture to tourism.

“It soon dawned on me — the influence a chef could bring to bear through my menus. I could have a huge impact on the island’s economy by keeping money in the country. I realized that in a tourism economy, the menus were the business plan of the nation.

“One thing kept coming up. The local cooks did not think their own food was good enough to be on the menus — good enough for home, but not good enough for top local hotels and resorts. I disagreed totally of course, but I knew that local cuisine requires local agriculture, so I needed to encourage the development of local cuisine.

“When local food is recognized as inalienable characteristic of the culture, it becomes something for everyone.

“I often think of Thailand and its street food. There I see an extremely successful cuisine. Each of vendor runs their food stall as a micro-economy — often family based.

“Because this food is local, it reaches out to the farms, fishermen and other food producers to create culinary prosperity.

“But there’s more: Every time one buys from a vendor, something magical happens. Sharing food is sharing from the heart, sharing of oneself. The shy smile looking for approval of a dish — food creates a culture of kindness.”

Oliver saw similarities in the Pacific.

“Our tourism menus were heavily skewered towards Western food,” he said. “We always think that overseas is better, including food. In our minds, Pacific food did not have the same status as say French or Chinese cuisine.”

The original Pacific diet was based on root crops, greens, seaweed, fish and lots of tropical fruit — a cuisine based on healthy foods and traditions.

But tourists usually asked for more of what they had at home. Maybe for them, Pacific food really wasn’t good enough.

“Consider for a moment the consequences of telling a whole region that their food isn’t good enough,” Oliver said.

“Food is synonymous with who we are. It is what our mothers make us. It is what nurtures us. It IS us. To be told that your food is not good enough — it hurts.”

With Dr Tracy Berno, he hatched a plan to publish a book that would create excitement around Pacific Island food, one that would raise awareness.

Berno, who co-authored “Me’a Kai,” is a tourism academic and consultant who has worked in the Pacific for over two decades.

When Oliver returned to the Pacific to work on the book, he was stunned by what he saw.

An organic revolution was underway. There were lots of high-value local products to draw from. To the outside world, organics is the luxury brand of cuisine. Organics is a natural fit in the Pacific, as it’s the same methodology used today as the original farming methods.

It’s not just a health brand. It was also in the way that Pacific people come together over food. In the Pacific, food strengthens, even creates, communities.

Story of food and people

There was incredible leadership within the organics sector of the local economy. An NGO in Samoa, Women in Business Development, has steered that nation's incredible organic revolution.

There are now close to 1,000 organic farms in Samoa. A renowned GMO activist in New York pointed out that a determined group of ladies in Samoa were, apparently, managing to do what world governments could not.

Suliana Siwatibau in Fiji, whose work included saving many of the Pacific heritage crops, is an expert on traditional Pacific healing through food.

Siwatibau stresses that when you lose a crop, you don’t just lose the food, you also lose the knowledge. You lose the culture

These Samoan women are not only creating smart food systems, they are creating a whole way to live. When “Me’a Kai” won the biggest award in the cookbook world, in one spectacular moment Pacific Island cuisine took its rightful place next to the great cuisines of the world.

Oliver said the success of his two books provided the status and the impetus to help Samoa’s Women in Business create a supply system connecting 44 of their family farms to restaurants and hotels in the capital, Apia.

He said his work has been about the economic potential of cuisine, but what also emerged was the issue of Pacific health.

The South Pacific is in a crisis. Every day, two Fijians have a limb removed due to diabetes. American Samoa, Nauru and the Cook Islands are the world’s most obese nations — with Tonga and Samoa not far behind. People have stopped eating traditional food and are eating processed foods. Their health is suffering as a result.

Yet the key to good health is all around — in Pacific farms, wet and dry markets and in the rustic dishes their grandmothers cook. Everyone has the power to change this. In fact, if you walk into any market or Pacific village or farm, you’ll see the tool kit for good nutrition.

This is a Pacific way of thinking. Anyone who has visited Samoa would have heard the term “fa’a Samoa,” roughly translated as “the Samoan way.” It is a way of thinking past the self and into the community and across generations. Community comes first.

It is now emerging in social business models that define business in a much broader way. It’s a business approach that works with “the power of love rather than the love of power,” and it's a way of thinking that is alive and well in the beautiful islands of the South Pacific, Oliver says.

Kai is not just food — it is matrix of connections to culture, community, the natural and supernatural worlds. If you raise the kai, you raise it all.

I have a sneaky suspicion that this won’t be the last time we will see Robert Oliver here in China.