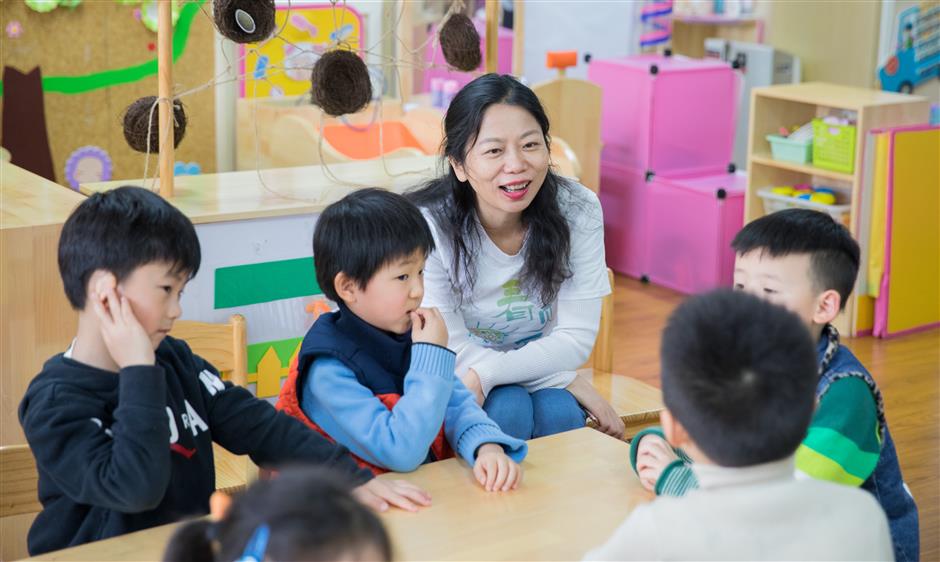 After treatment, she got to thinking. Maybe she could use her experience to help others avoid the same problems.

With the help of a foundation in Beijing, she founded Shanghai Eye Love Volunteer Service Center.

“I didn’t form good habits to protect my eyes when I was a child,” she says. “And the damage was irreversible. Now two years after my surgery, I feel that my eyesight has worsened again.”

Her service center is aimed at children 10 years and younger. It trains volunteers who give free courses to children in Shanghai and several other cities in China. Its program “Little Eye Man” was selected recently one of the top 10 charitable services by the Shanghai Civil Affairs Bureau.

“Eye health is very, very bad among Chinese children,” Gong says. “Recent research by the Ministry of Education shows that half of children under eight have eyesight problems.”

Gong describes what she calls “the grade-3 curse.” It refers to the fact that many third-grade students are found to be near-sighted. Perhaps the problems are longer standing and simply tend to come to the fore in primary school, she says.

The service center has developed what it calls a “magic kit” to promote better eye health. The kit contains a set of shaded boards that help children learn what level of illumination is suitable for reading and doing homework, a board game to teach them healthy eye-care habits, some tip cards and a journal.

“The games are designed to plant a seed in children’s minds,” Gong says.

She says she believes that every child could function as a “superhero” to help, correct and remind each other and even younger children about eye care, so that healthy habits are formed at an early age.

“After all, a habit can stay with a person for a long time, even a lifetime,” she says.

Magic kit courses given by volunteers last for three classroom hours. Some of the volunteers are from the EYEducate Club at the Shanghai American School. Founded by student Bridget Lu in 2015, the club has gathered together 15 students from schools that work together to achieve eye-care goals.

“Last year we held 26 events in Shanghai and Wuhan during winter and spring holidays,” says Lu. “Our hope is to help younger children form a ‘brighter’ and ‘clearer’ future.” 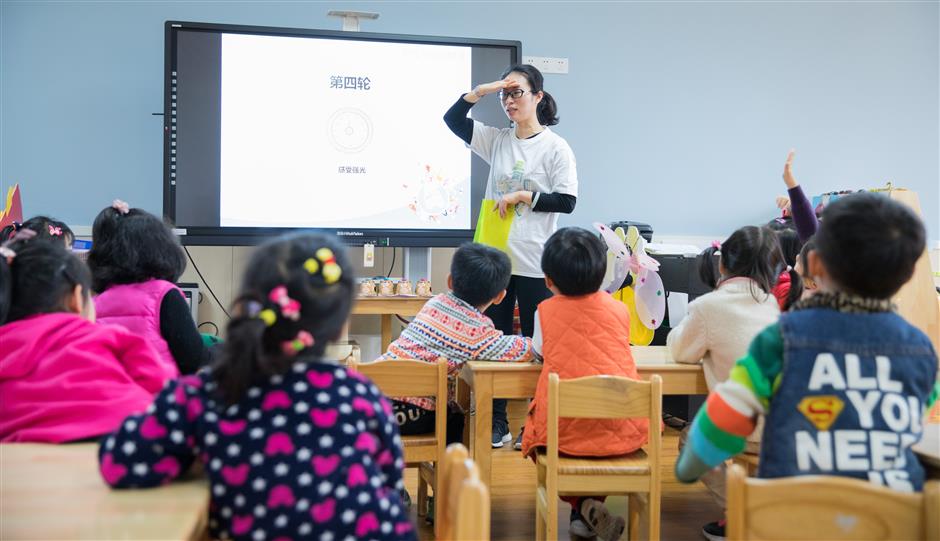 Bridget Lu with the Shanghai American School works as a volunteer for the service center. 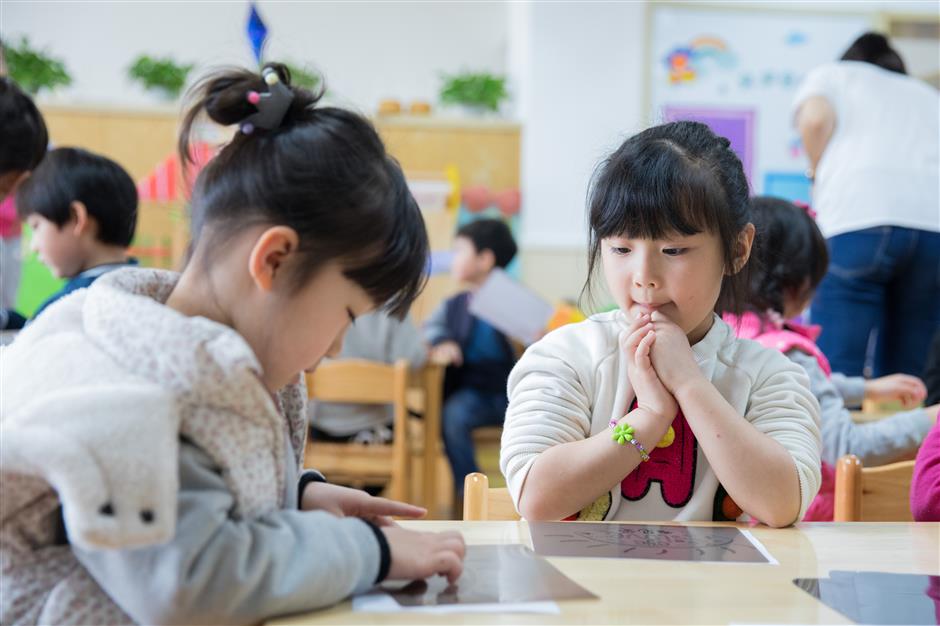 Two girls use light shades to find the best illumination for reading.

It isn’t always easy to persuade schools to set aside three class hours for the volunteers, Lu says.

“Elementary school students are faced with academic pressures nowadays, and the schools are not willing to squeeze their normal classroom hours,” Gong says. “Also, some schools are suspicious that this program is just some kind of promotion.”

The service center uses scientific research to advance its goals. Last year, it distributed more than 1,000 questionnaires to parents in Shanghai and Beijing, asking about the eye-care habits of children, mostly between 5 and 8 years old.

Nearly one-fourth of respondents said their children had eyesight problems and spend quite a lot of time using electronic gadgets or generally stay indoors doing homework, reading or playing piano.

“Outdoors activities are very essential to eye care,” Gong says. “Research tells us that sunshine increases the dopamine in the retina, thus protecting our eyes.”

She said children from different areas in China face different eye hazards. In some remote areas, inadequate sources of light are the biggest problem. In big cities, such as Beijing and Shanghai, too much time on electronic devices is the archenemy.

Some parents simply don’t realize how prolonged time on electronic devices may harm their children’s eyesight.

“Some parents I know give their children a smart phone or tablet to keep them quiet at the table when they eat out,” Gong says. “They are proud that their children’s behavior is so exemplary. But in my opinion, they are hurting their children.”

Other risks to good eye care lurk in schools. Almost every school nowadays comes equipped with huge digital screens, and children sitting in front rows are exposed to great electromagnetic radiation that could damage their eyesight, she says.

“All we can do is call attention to these issues as much as possible, though sometimes we feel frustrated our impact is so limited,” says Gong. “But we believe that no matter how small the changes we achieve, we are making a difference.” 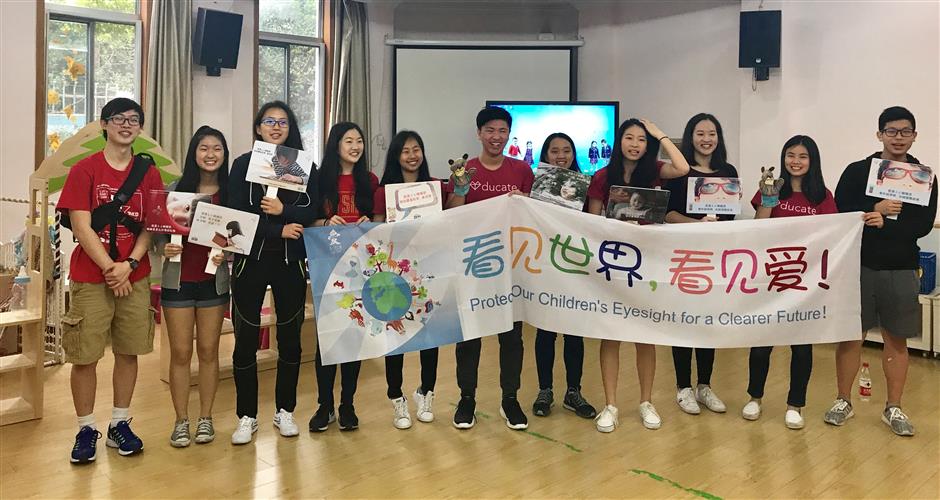