At the age of 93, she can still do almost everything she wants to — cook, dance, play tennis, take the bus to different places to teach her students — without burdening her body.

Doreen Hynd, a passionate and energetic woman, who lives in the United States, says she attributes her vigor to a lifetime love of and persistent practice of tai chi, a Chinese martial art form practiced to defend oneself and keep healthy.

Born in Australia in 1925, Hynd began tai chi training in her 50s and moved to the US in 1984, where she later became an instructor herself.

To date, Hynd has taught for almost three decades at such places as the United Nations, Carnegie Hall and the State University of New York.

Hynd says she loves dancing, gardening and getting to know all kinds of people, but her “greatest passion” is practicing tai chi.

“It is such a gift. I have been wanting to bring it to the whole world,” she says. “Tai chi has withstood the test of time for several centuries in the Chinese culture.”

The concept of tai chi appears in both Taoist and Confucian philosophy, where it represents the fusion or mother of yin and yang into a single ultimate, represented by the tai chi symbol. Tai chi theory and practice evolved in agreement with many Chinese philosophical principles, including those of Taoism and Confucianism.

“It allows a quiet approach by not using force. It brings about an awareness of breath and calmness and invites the body, mind and inner consciousness to work together for an experience of lightness and strength,” Hynd says.

On the 9th UN Chinese Language Day, which is observed annually on April 20, Hynd was among those invitees, who are either experts on the Chinese culture or have a special skill related to the culture.

Hynd stunned all those present while performing tai chi at an event sponsored by the UN Tai Chi Club.

“I just can’t believe my eyes that she is a 93-year-old grandma,” said Iris Wang, secretary-general of the non-profit World Accountability Organization based in New York. “She could bend her body, raise her leg so easily and keep herself still while standing on one leg. It’s just amazing!”

Cao Guozhong, president of the club, says Hynd serves as the best example that one could benefit enormously from practicing tai chi.

“What’s more important is that she is one of the few Americans who really understands the core values of tai chi,” Cao says. 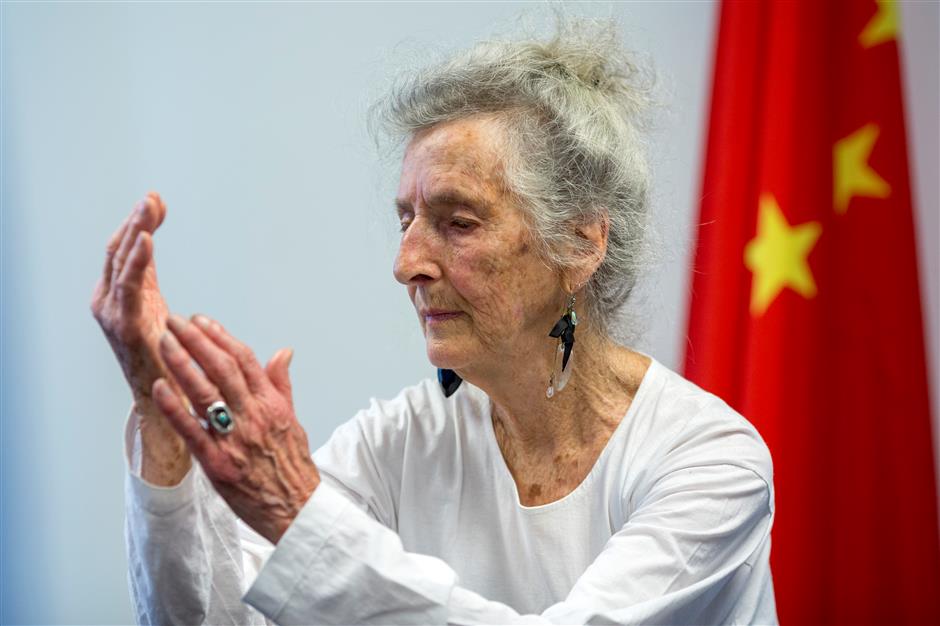 When asked what the greatest benefit was that she had derived from practicing tai chi for several decades, Hynd says, “balance.”

“We human beings should live with very fine balance in our emotions, including how to present ourselves to the world,” she says, adding that practicing the martial art helps bring balance.

“Practicing tai chi helps you develop and acquire the balance, and guides you to take time to listen. To absorb what is being heard will help bring balance right then,” she adds. “The practice begins with a physical one, but it gradually develops to a stage that universal truth could be felt.”

Chen Feng, a senior interpreter at the United Nations, says that he thinks tai chi has helped Hynd achieve balance, both physically and mentally.

“Balance here means one could keep a very good balance between yin (dark or negative force) and yang (bright or positive force),” he says.

“From what she has said and the way she presents herself, I bet she knows very well that how seemingly opposite or contrary forces may actually be complementary, interconnected, and interdependent in the natural world, and how they may give rise to each other as they interrelate to one another.”

Hynd has been teaching retired people of all ages and different cultural backgrounds how to practice tai chi in Canada.

“These people have benefitted tremendously from their association with the Chinese culture,” she says.

Tai chi allows these people to understand that, from the perspective of yin and yang, all things are interrelated.

“This philosophy helps them understand that wherever we are living, black or white, poor or rich, we are all of one family,” she says.

This might be where the appeal of tai chi lies. “It helps remove differences.”

Almost all of her students are developing a balanced state of mind after months of practicing, and many have improved their health, she says.

Hynd recounted the story of a doctor who had suffered brain injuries and been hospitalized for years. He was told that his lost memory would never come back. But he came back to his doctor one day after three years of practicing tai chi, saying joyfully “my memory is coming back.”

“This slow-motion exercises are gradually curing many of my students,” Hynd says, adding that medical practitioners want to know what’s behind all these miracles.

Ed Emswiler, who has been practicing tai chi for nine months with Hynd, says, “it’s peaceful, relaxing and centering. Somehow, it has brought changes to my life. The more I practice, the more I realize that it will have a greater impact on my life and the way I deal with others.”

As a renowned practitioner and teacher of China’s tai chi, Hynd says it is a pity she has never visited the ancient country which boasts a glamorous civilization and modern vitality. If given the chance, she would like to go and seek out the descendants of a renowned tai chi teacher, Master Ma Yueh Liang (1901-98).

“I would love very much to visit China. I like to walk in China’s streets and get to know the people and visit the descendants of Master Ma,” she says.