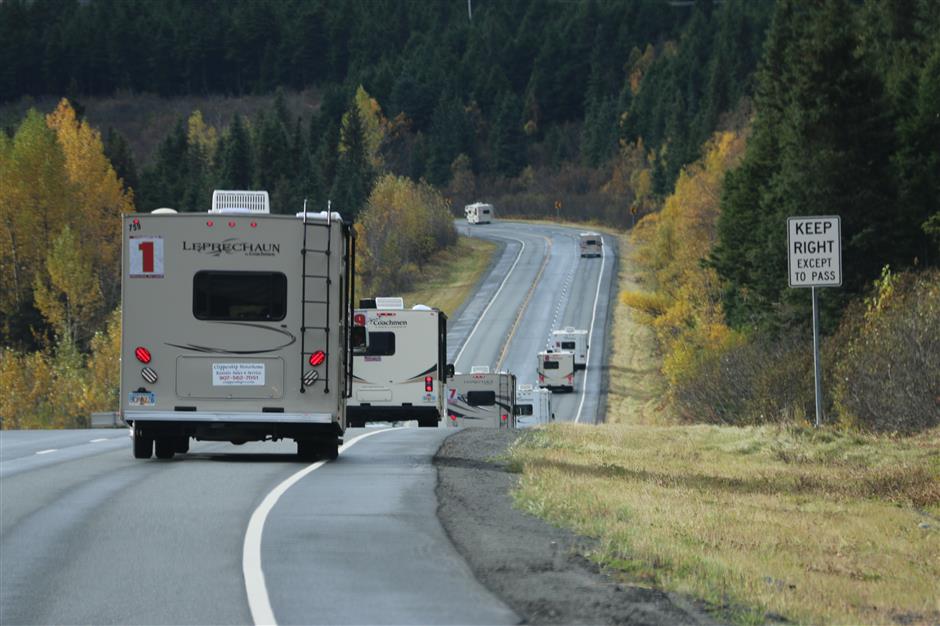 Chinese tourists on their way to Alaska with RVs

Shi Jianliang has just come back from a two-week trip across Florida with 40 Chinese tourists in eight recreational vehicles. In about two weeks, he will head to Canada for the sixth overseas caravan tour he has organized since 2015.

“Traveling with recreational vehicles is common in the US and Europe,” he says, “but it’s still a new experience for Chinese people.”

Indeed, the idea of traveling like a turtle, your “home” carried along with you, is catching on quickly.

“I fell in love with RVs the first time I drove one back in August 2015,” says Shi, a veteran traveler and the organizer of the Shanghai Transportation Radio Car Club. “Many of our members, who are veteran travelers and have tried everything related to tourism, still find this experience impressively fresh and fun.”

Recreational vehicles in Western countries are a popular means of taking road trips without being deprived of the amenities of home. You can see the sights by day, unrestricted by needing to find a hotel room or even a restaurant. It’s an offshoot of the concept of “communing with nature” without having to forfeit the conveniences of home.

In Australia, where “homes on wheels” are called caravans, Chinese translations have begun to appear on the websites of caravan parks. The Chinese have now become the second-largest market for RV travelers, after local tourists.

Many caravan-related services, such as leasing a vehicle or booking a campsite, are available on Chinese sites like Taobao or Ctrip.

In recognition of the trend, the fourth World RV Conference will be held in Shanghai in October.

“Recreational vehicle tourism is growing in China as central and local governments are promoting development of the industry,” says Zhou Huai, head of the conference’s organizing committee. “The potential in the next few years is huge.” 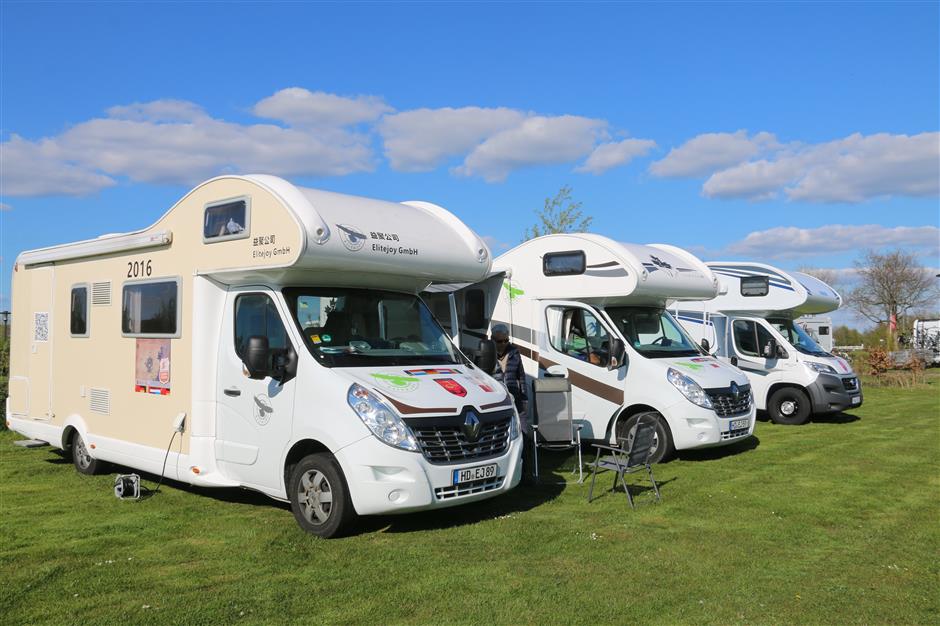 RVs in Western countries are often larger than their Chinese counterparts. 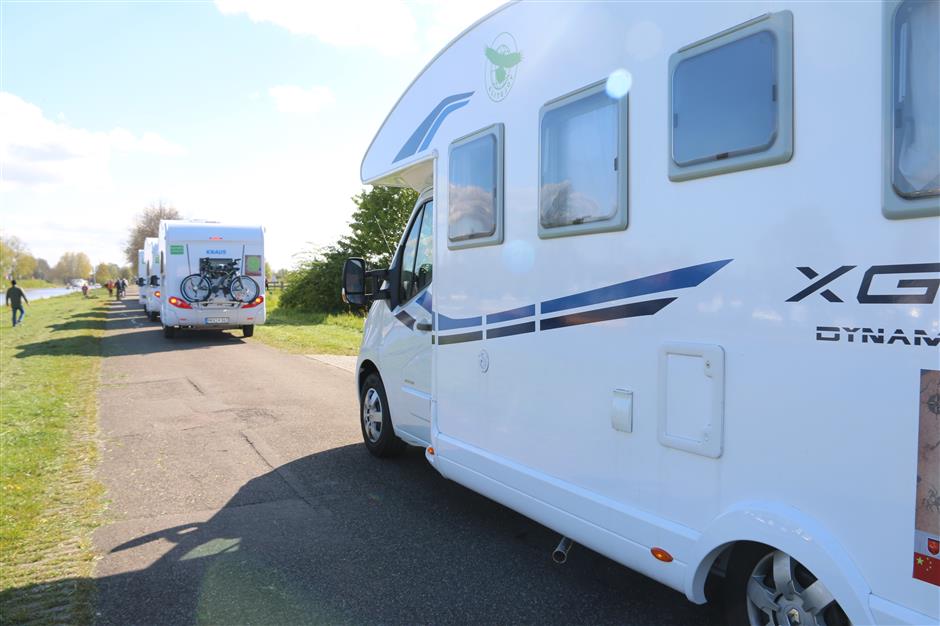 The central government announced policies related to RVs in 2015, followed a year later by Shanghai and other provincial governments.

According to a survey by www.rtrv.cn, a site specializing in road trips, sales of recreational vehicles in China rose 60 percent last year, and the number of RV campsites has almost quadrupled since 2015 to 825.

The survey estimates that there will be 4,000 campsites on the Chinese mainland by 2020. There are already more than 500 domestic clubs and companies that lease recreational vehicles.

However, for the time being, veteran travelers still seem to prefer overseas road trips.

“There are a lot of differences between China and the US or Europe in terms of vehicle size and campsite facilities,” says Jiang Hui, a host of Shanghai Transportation Radio.

“The vehicles available here are about 6 meters long, and you can probably fit in a mini-fridge like those in hotel rooms,” he says. “By contrast, those we have used on Canadian and American trips can easily accommodate a two-door fridge like you would have in an apartment.”

Of course, RV travel often boils down to the mathematics of leasing a vehicle vs staying in hotels along a trip.

“You can find hotels of different prices everywhere, especially in the Yangtze River Delta,” Jiang explains. “So there really isn’t any necessity or demand for caravans, unless you are just doing it for the sake of the experience.”

Shi, who has organized RV trips across western US, Canada and Alaska, doesn’t do much business in the domestic market. When he does organize tours in China, they are typically much shorter.

“The campsites here are fairly new, and the facilities are still works in progress,” he says, “compared with overseas camping parks that have been running for decades.” 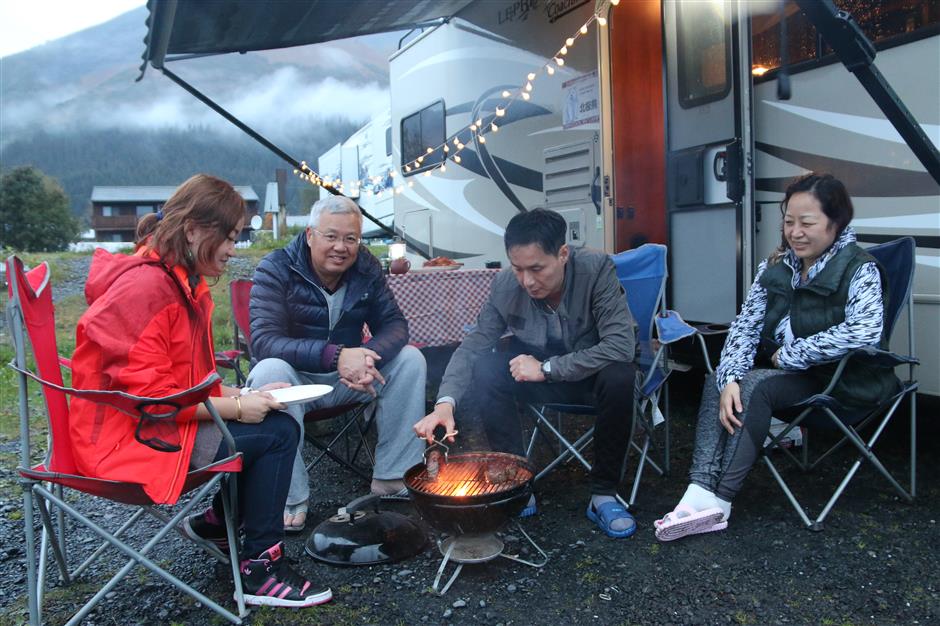 Chinese RV travelers stop for a BBQ break on the road in Alaska. 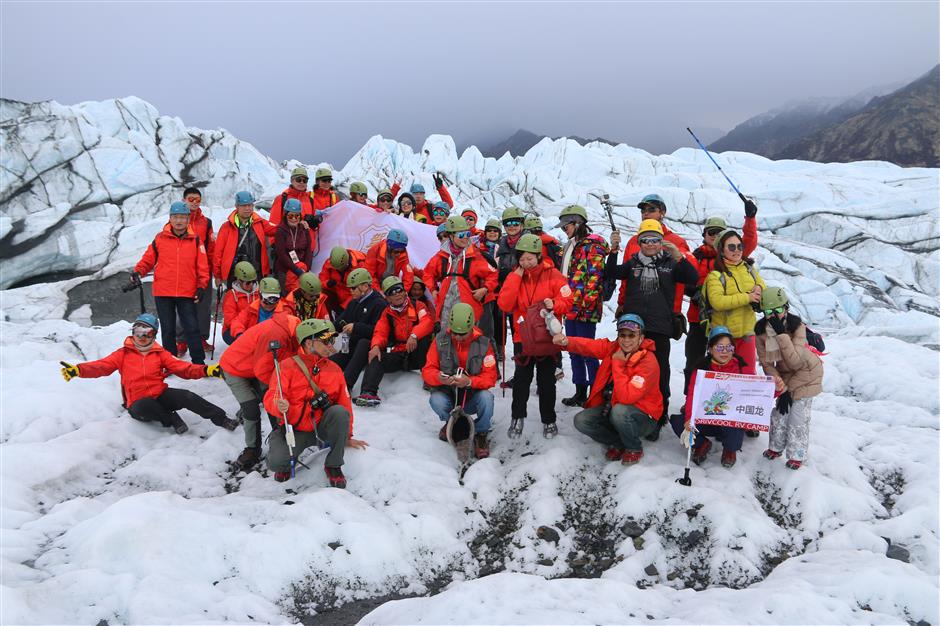 Recreation vehicles vary in size and amenities. Some are pretty basic: beds and room perhaps for a small fridge. Others are more luxurious, with small bathrooms and kitchenettes in a carefully designed interior of fold-out fixtures.

Recreational vehicle parks in Western countries typically provide electricity and water hookups, along with sewage disposal tanks. China has some catching up, and savvy operators spot the trend.

The Green House Hotel in suburban Shanghai’s Fengxian District is now expanding to provide services to those who lease caravans at the site or bring their own.

“They are very convenient inside, pretty much the same as a standard hotel room,” says Wu Mengxia, who works at the hotel.

The hotel has long been a popular venue for corporate team-building conferences or weekend family trips. The new caravan park is a sweetener for visitors.

“It was very popular during the Qingming Festival, or tomb-sweeping day, in early April,” Wu says. “And the park is usually sold out on weekends. It’s especially popular with young people, young couples and parents with children.” 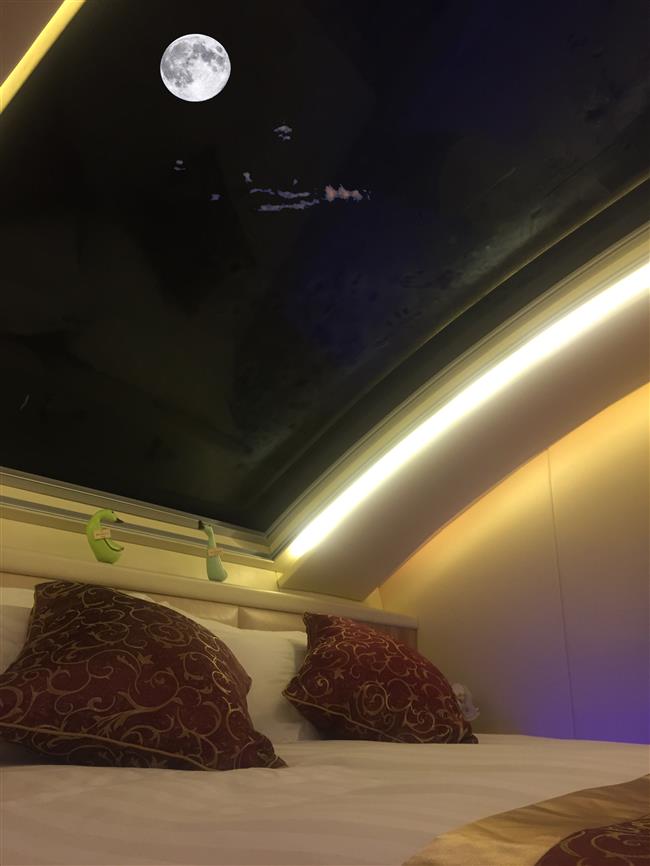 The hotel is now building a second phase of the caravan park, which will provide full facilities for mobile homes.

“I traveled a lot in my own caravan when I lived in Sydney,” says Wang Yan, a 35-year-old finance director who returned to Shanghai after three years in Australia. “I really wanted to buy one when I came back, but my wife was concerned about costs, parking and other issues.”

With all the parks built or under construction around China, Wang says he is thinking of broaching the idea again with his wife.

Shi, with the Shanghai Transportation Radio Car Club, says RV travel has the potential to change the face of traveling in China. An RV is better than having to cram a family into a passenger car for long road trips, he says.

“Hotels are comparatively expensive, if you can actually get a room,” he says. “So many people may well consider leasing a caravan, where you have more space for the family and you can stay overnight in any of hundreds of campsites, with all the facilities you need, including bathroom, shower and cooking facilities.”