Polish Andrew and his Chinese heart

Polish Andrew insisted via WeChat that he would go to the front gate of his neighborhood to meet us since his home is situated in a corner that's a bit hard to find. He lives in a flat at a Chinese community in Putuo District.

Then on an early spring morning I met Andrew, who was casually wearing thick pajamas in Chinese red.

“Hi, I’m Andrew Zawadzki-Liang.” He shook hands with me. The 63-year-old Polish man said after he married a Shanghainese woman, he added her surname to his.

“My foreign friends always say 'Liang is Chinese.’ Yes, I think I go too deeply, and I have a Chinese heart. If possible, I want to change my passport into a Chinese one.”

After we sat down in the living room of his totally Chinese-decorated home, Andrew treated us to cups of green tea and shared his Shanghai stories of the past 20 years.

During these stories I realized, the most important person in this loving Polish grandpa’s life now is his Chinese granddaughter Xiu Xiu, his step-daughter's daughter. 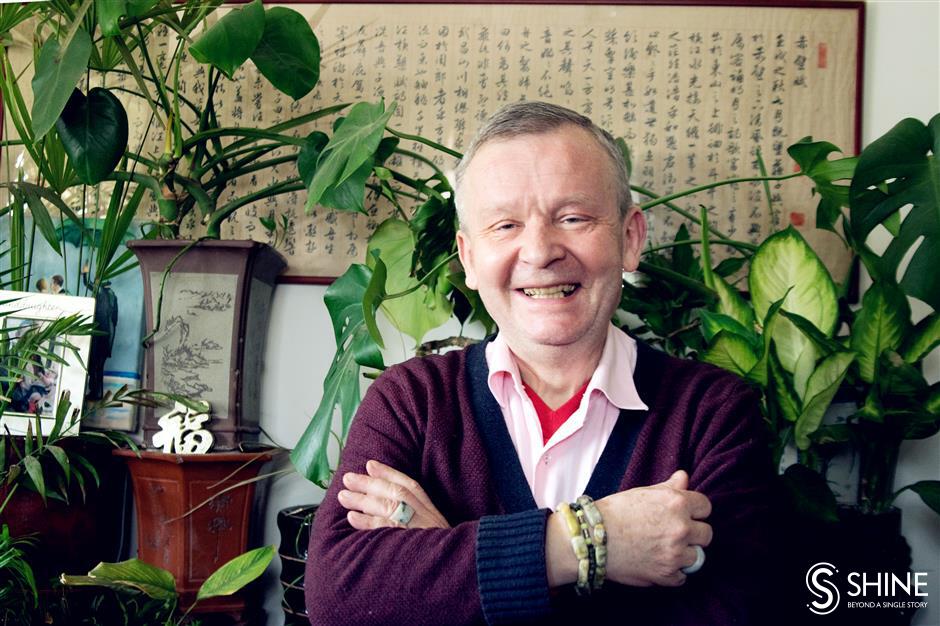 Andrew picks one of his favorite corners at his house and poses for a photo in front of a calligraphy work which was done by the father of his wife's ex-husband.

Holin: Would you please share with me the reason you came to Shanghai and why you chose this city?

Andrew: There were a few moments when I prolonged my decision to settle down. Let me see, when I worked in the first Polish company in Nanjing, then I decided to stay. Then I used to work for a Chinese company in Hong Kong, and I moved back to Nanjing because I didn't like Hong Kong.

It was another moment when I got another offer from a furniture company to prolong my life here.

Then was another moment when I met my wife in Shanghai. For us, where to live, Shanghai or Europe? Of course, several years later after we met, we can move wherever we want, it is not the problem. But my wife, a typical Shanghainese, is conservative. She has a daughter. Her daughter is married. After marriage, she had a baby, and I’m not just a husband (but a grandfather too.) In this point, you can see I am little bit like a Chinese man — the woman decided it. Let it be.

There is not one moment, there is a series of events that created the situation.

Holin: Wow, indeed a series of moments created who you are today. Do you remember the moment you first came to Shanghai?

Andrew: This moment was very awkward and crazy. I took part in the first East China Fair, and at that moment Yan'an Road was under construction. I remember the first time when I went to Shanghai, and the taxi driver closed the windows because of the construction, and they just complained, and complained... it was really funny.

Many buildings at that time still didn't exist, they were just under construction. First time I saw Shanghai, “wow!” So much construction. It was not one place, they connected long distance. Very impressive!

Holin: Besides the construction everywhere, do you have any other interesting or impressive stories with Shanghai?

Andrew: Yes, you know Shanghai is very interesting. Why? Because it is just like Babylon Tower because of the mixed people and mixed cultures. How to deal with this mixed case? It is a big challenge.

Another case you might know… Yes, I like Shanghai, and my family is in Shanghai. My everything is in Shanghai now. Except this, let me say the personal reason. You see Shanghai is the city where you really can do something. If you want to improve yourself, your behaviors, it is the best place, because you have the chances, opportunities and possibilities. It depends on you. If you want, you will have it. 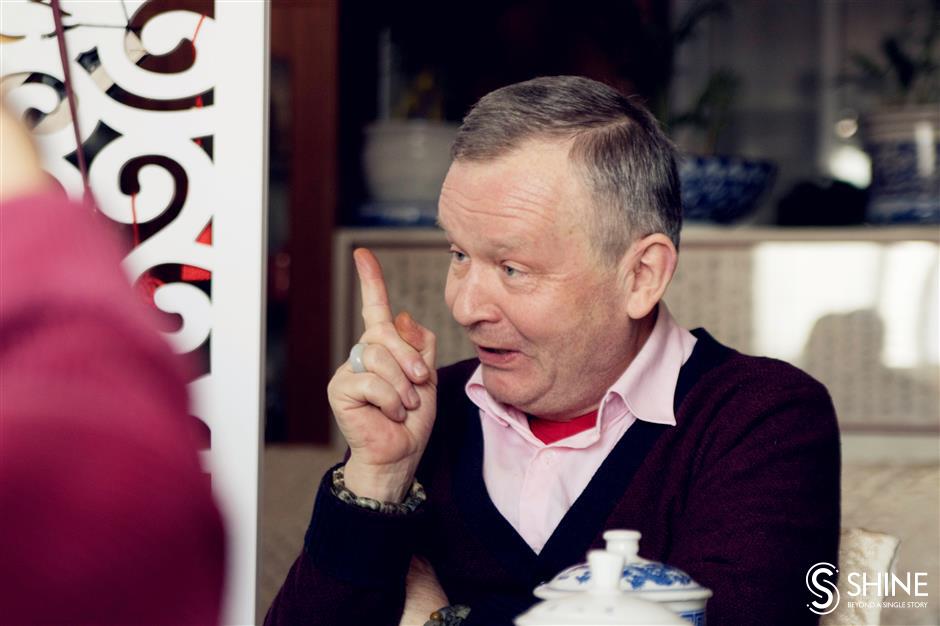 Andrew talks during the interview

Holin: How do you spend your weekends in Shanghai?

Andrew: Meet my Chinese friends. We will have talks and meals if I have free time. And I found expats often complain... I don't like when they complain about life, about Chinese people. I don't want to judge them, and I just feel that they only see one side.

And on weekends, I prefer to be quiet. Sometimes, I will go to universities because there is less people. Second, I like to read. By the way, I read not only Chinese news on Chinese media, and I also try to compare them with Western ones.

Holin: You just told me now that most of your daily life during weekdays is around your granddaughter, right? Will you speak Polish or English with her?

Andrew: English and Chinese. I think teaching her Polish is useless. I am practical and I think she should learn more English because it is useful for her future.

Holin: In Poland, will grandparents take care of their grandchildren?

Andrew: No, simple answer. It just happens in some special cases, but not for their daily life. They should take themselves. Not like me, sending her to school in the morning, picking her up in the afternoon, and supervising her homework. When her homework is done, then I will have time to do my things.

But Saturday and Sunday, I am free. The young parents will have time, so they will take care of her on the weekend.

Holin: Do you enjoy the daily life here, taking care of your granddaughter?

Andrew: Yes. I enjoy that. But it is like an old man, not just for expats, it would be nice to have some additional job. 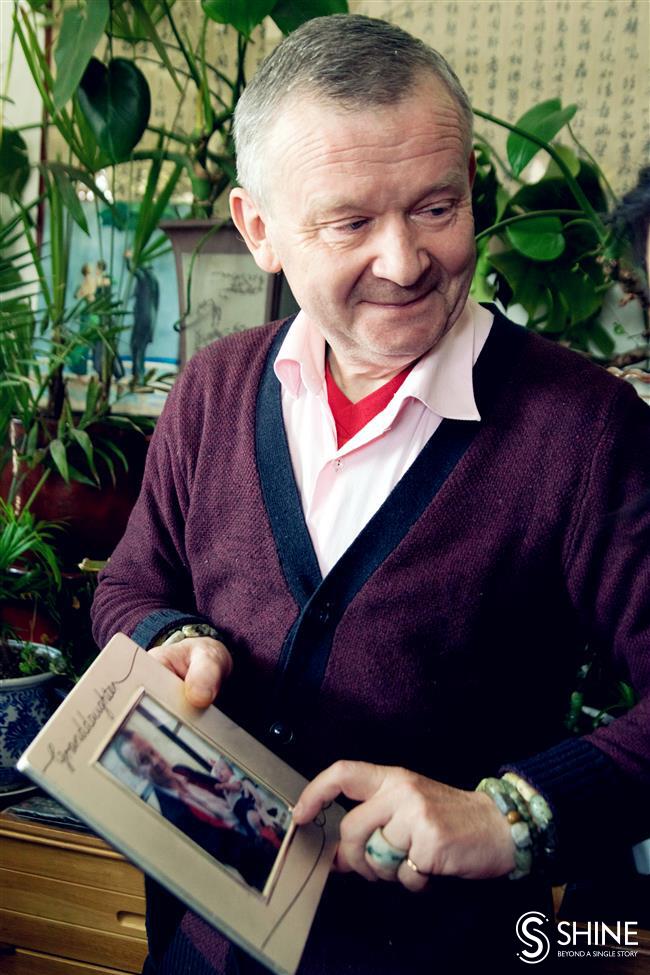 Andrew shows a photo which records a happy moment with his new-born granddaughter several years ago.

Holin: Which place in Shanghai do you like best? Why?

Andrew: For example, Zhongshan Park. I like old Shanghai, like inside of Fuxing Road. Nanjing Road W. is perfect; the Bund is perfect, but there are too many people there. Shanghai has many nice places, but too many people.

Holin: You mentioned you lived in Gubei area for a long time. It is kind of international there, and here it's much more local. Can you give me some comparisons?

Andrew: Gubei area gets the international environment and the people from different cultures, even the Chinese people there are more open. People here and there behave in different ways. People here just wait, waiting for decisions, and they are not active.

You know the international environment creates people who are more open, more active. They want to do something. Here, I am like the cherry on the cake.

For example, like this gate in my building which is not repaired for one and half year. The watchman downstairs, I know him very well, but he was afraid to do something, and I say, “Okay, I will pay the money, my money.” This is an example of different ideas. I don't blame people, but I blame the management. Tell the people you can do it, tell the people that if we put the money, we can replace it.

Andrew: Too many roads I like. Some part of Huaihai Road is very nice; Hongqiao Road, the part that's more close to the zoo. By the way, I also like Gubei area where I lived, like Shuicheng Road, it’s green, nice, and less people. I like green areas, and I love small roads.

Holin: What elements of Shanghai make you like here?

Andrew: Three points. It is a lively, light and green city.

This is a lively city. I don't say it is like New York that never sleeps. It will sleep after midnight. The best part I like about this city is that it doesn't sleep at 8pm or 9pm, unlike Beijing. You know in Beijing, you can only go to expat area, shops may be open longer there. Here in this city, you see, shops open longer, and the street is alive longer. This part I like.

Secondly, definitely lights, the city lights the dark, you will feel that even in evening time.

And another part which is my favorite part, is green. This city has many green areas as well. 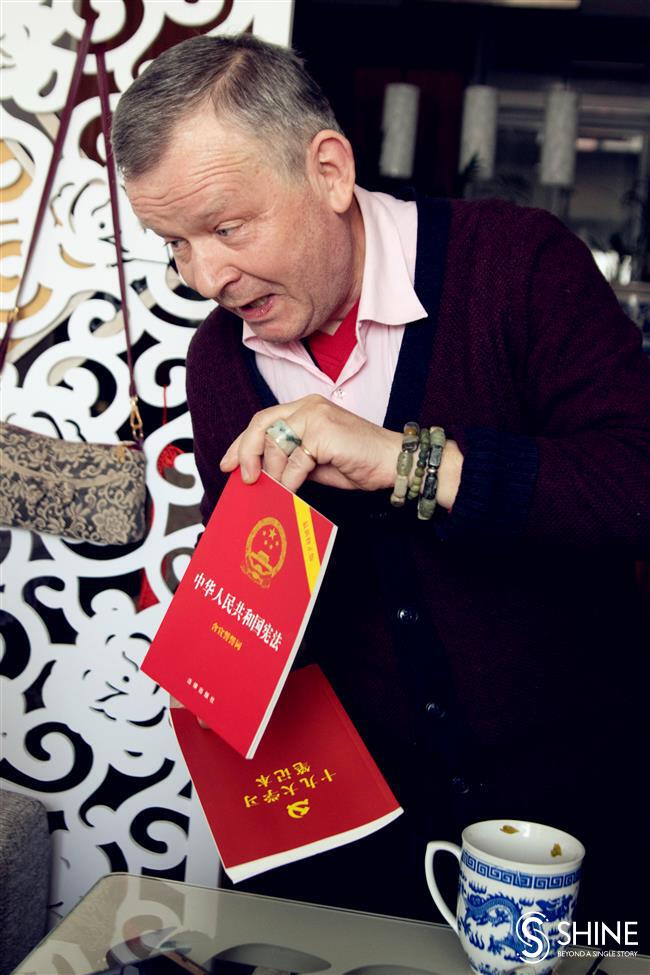 Andrew shows the latest version of his "red collection," telling how he loves the Communist Party of China.

Holin: Do you have anything you hate in Shanghai? Any suggestions to change it or make it better?

Andrew: I never say hate. Maybe something I dislike — rubbish or garbage. Say no to garbage! I like clean, I don't like rubbish. I think this case is easy to solve. Of course, you can't solve it in one day. Shanghai has infrastructure, and you already use what you have. You have to be strict to cleaners, while the only solution is not just cleaners. You can employ more strict cleaners, but this is just a temporary solution, and it will cost you money.

Pay attention to simple cases — install more rubbish bins, like at the bus stops, the subways, and make it convenient for people to put the rubbish in rubbish bins. This is the key point. It will be much better. This is maybe not the solution, maybe it is the route where we can try.

Holin: Compared to your country, any shortages in Shanghai?

Holin: Do you have any impressed memory during your life?

Andrew: I am 63 years old now. So many events, so many cases happened. And one of the most impressive memories during my life is my mother passed away. I go with the Chinese way and I will never forget. I mean the Chinese ceremony, which totally shocked me.

And another case is with my friend. He opened my eye's to the Chinese mind, Chinese culture, and the Chinese way. At that time when I just came here, we ate and talked all day. I don't even remember what we ate, but the stories, the case I remember it so deeply, how he tried to explain to me that I must see it from different angles. I try to understand in the Chinese way, what you do, and the meaning of it. In this point, he opened my mind, we spent whole Sundays. It was very funny.

And another story is about the mother of my wife who passed away. She never felt afraid of me. At the very beginning, even her hearing was not so good, and her language was terrible. She always smiled, and we communicated in a simple way. She always held my hands when I sat down beside her. I will always remember this picture.

When she passed away this year, she was 93. Before me, she had never seen any foreigners in her life expect on TV. But by her side, I never ever felt I was a foreigner. I came to her house, and she would give me a cup of tea which was very unimaginable.

What does Andrew want to say to himself in the future? Have a look! Andrew is sending a message to himself 10 years from now!