Useless junk? Hidden gem? You can find almost anything here!

When I was a university undergraduate, I frequently traveled home on Metro Line 4, which is partly elevated. Gazing out over the city as the train passed through the Baoshan and Hailun Road stations, I was fascinated to see the crowds walking along the streets in old neighborhoods below and wondered what those places were like at ground level.

With that old interest in mind, I recently alighted at the Baoshan Road Station to explore one of those areas, which turned out to be Qiujiang Road. Upon my arrival, a woman was hawking iPhones: “Do you want to buy one?”

When I expressed my surprise at it all to an elderly man nearby, he snorted and said, “Unbelievable! You are Shanghainese and you haven’t heard about this place? It is a very famous secondhand electronic goods market in Shanghai.”

Qiujiang’s name suggests a bit about the area’s history. The character jiang (江) means river, and indeed the road was built on the former course of a local river that was filled in in the early years of the 20th century.

Locals said that the defeat of the Japanese army in 1945 forced many Japanese emigrants who lived in the area to sell off their properties before leaving China. In a sense, it was the beginning of the secondhand market.

“Elderly residents around here told me there was already a flea market here in the 1940s, mainly selling hardware and daily necessities,” says Jerry Shen, who visits Qiujiang Road every weekend and offered to show me the area. “In the 1990s, the focus shifted to secondhand electronic products.” 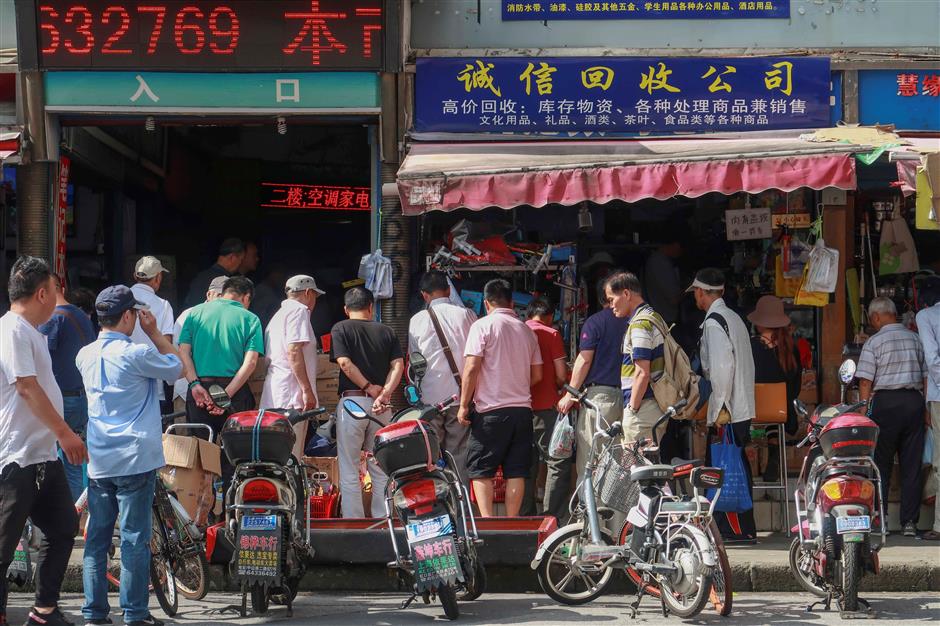 It's not only the bargains that attract people to Qiujiang Road, but also the fun of just browsing through junk. 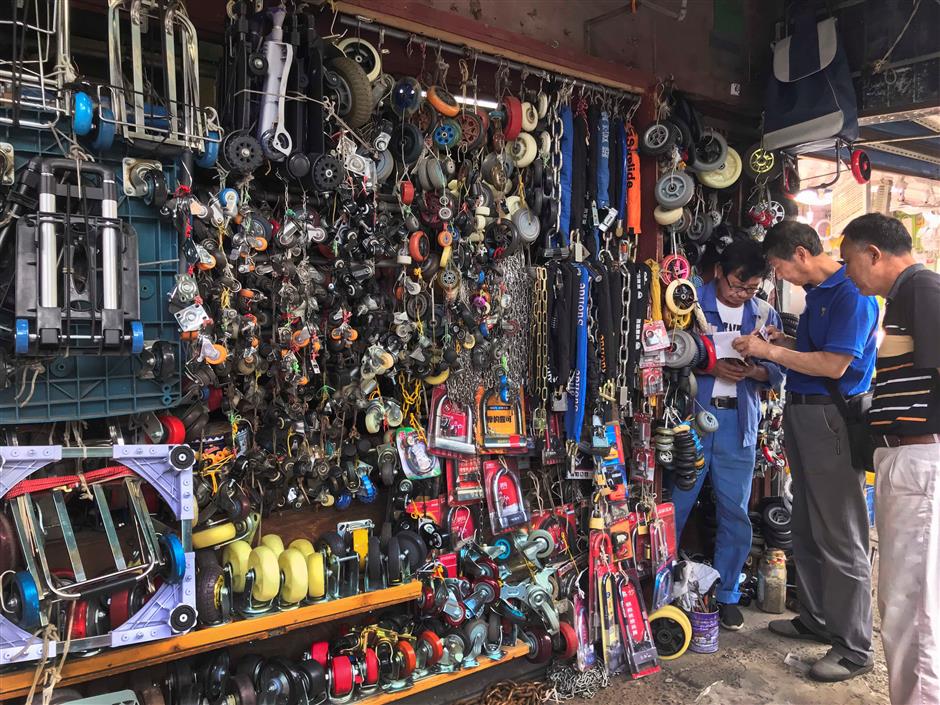 I met Shen, who is in his 30s, on a Sunday afternoon in front of a shop selling secondhand audio systems. He says his father, who loved audio equipment, often took him to the street as a young boy.

“My home is quite near,” says Shen. “Although my father has passed away, I inherited his obsession with electronic products and this market. Unfortunately, I can no longer browse it with him.”

Many elderly men were gathered near the shop, talking about items that to my eyes looked somewhat useless and hardly invaluable.

One of the men spent 300 yuan on three broken amplifiers, which raised some eyebrows among onlookers asking aloud why he had made such a purchase.

“Fixing machines is one of my hobbies,” the buyer told them. “I can fix these three amplifiers in a week. Since this shop will close soon and the prices are good, I buy as many as possible. I will keep one of these amplifiers and sell the rest through an online secondhand trading platform like Xianyu or Aihuishou.”

While all this was going on, two urban management officers, known as chengguan, appeared on the scene and asked the shopkeeper to remove merchandise spilling out onto the sidewalk.

Not only is the audio shop on the verge of closing. Many retailers up and down the street were packing up merchandise and shouting out bargain prices “Last day! Last day!” the voices echoed along the street.

Qiujiang Road is undergoing big redevelopment. The shops there are dilapidated and pose fire risks, but the buzz in the neighborhood remains lively. It’s the mess and noise of the environment that give the area its down-to-earth atmosphere. Even visitors get caught up in its unpretentious charm.

“Wandering the street every week has become my habit,” Shen says. “I have been coming here for over 20 years. For many of the elderly who congregate here, it’s as much about socializing as buying anything.”

In contrast to the bustling street, a shopping mall selling new digital products on the east side of Qiujiang Road appeared bleak. Few customers were in the mall, where shopkeepers made up for the lack of business by playing computer games or sitting together in a corridor, chatting and drinking tea. 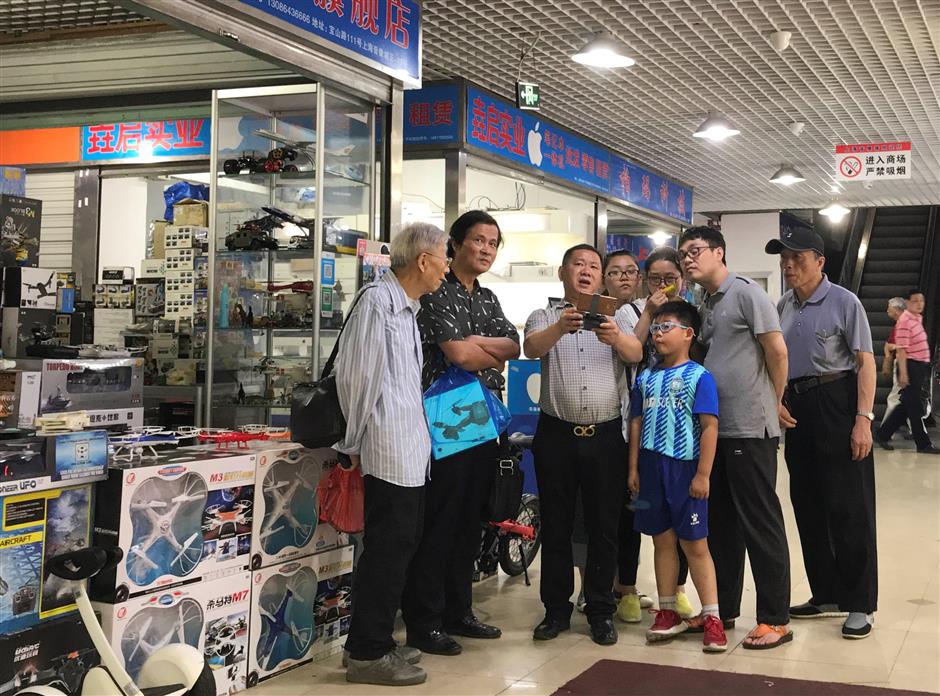 A shopkeeper at a nearby mall shows bystanders and potential buyers how to operate a drone.

“Notice that the up escalators are running but the down ones aren’t,” he says. “It seems that they welcome customers to the mall, but when customers decide to leave, they are ignored.”

It’s probably more the case that the mall needs to save on electricity costs as e-commerce bites into the business of traditional bricks-and-mortar retailers.

“If I really want something, I prefer online shopping nowadays,” Shen admits. “However, strolling along the road is quite a different matter. I often find hidden gems unexpectedly.”

On our little tour, he spent 2 yuan on an old gamepad, purchased in a narrow alley parallel to Qiujiang Road. The vendor was a peddler displaying his goods on a cloth spread across the ground. He was among several in the area selling an odd array of items that included old-fashioned shoes, a secondhand hair dryer, a vintage microphone, used eyeglass cases and even dentures.

Shen also bought a vintage vinyl recording of Hong Kong pop singer Jacky Cheung. The recording attracted a lot of attention as we walked along. Several people took the record from Shen to examine it and ask where he got it. Their conversations were so natural that I thought perhaps Shen knew the people, but actually they were just passers-by.

“The most interesting or odd things are always hidden in the shadows,” Shen says. 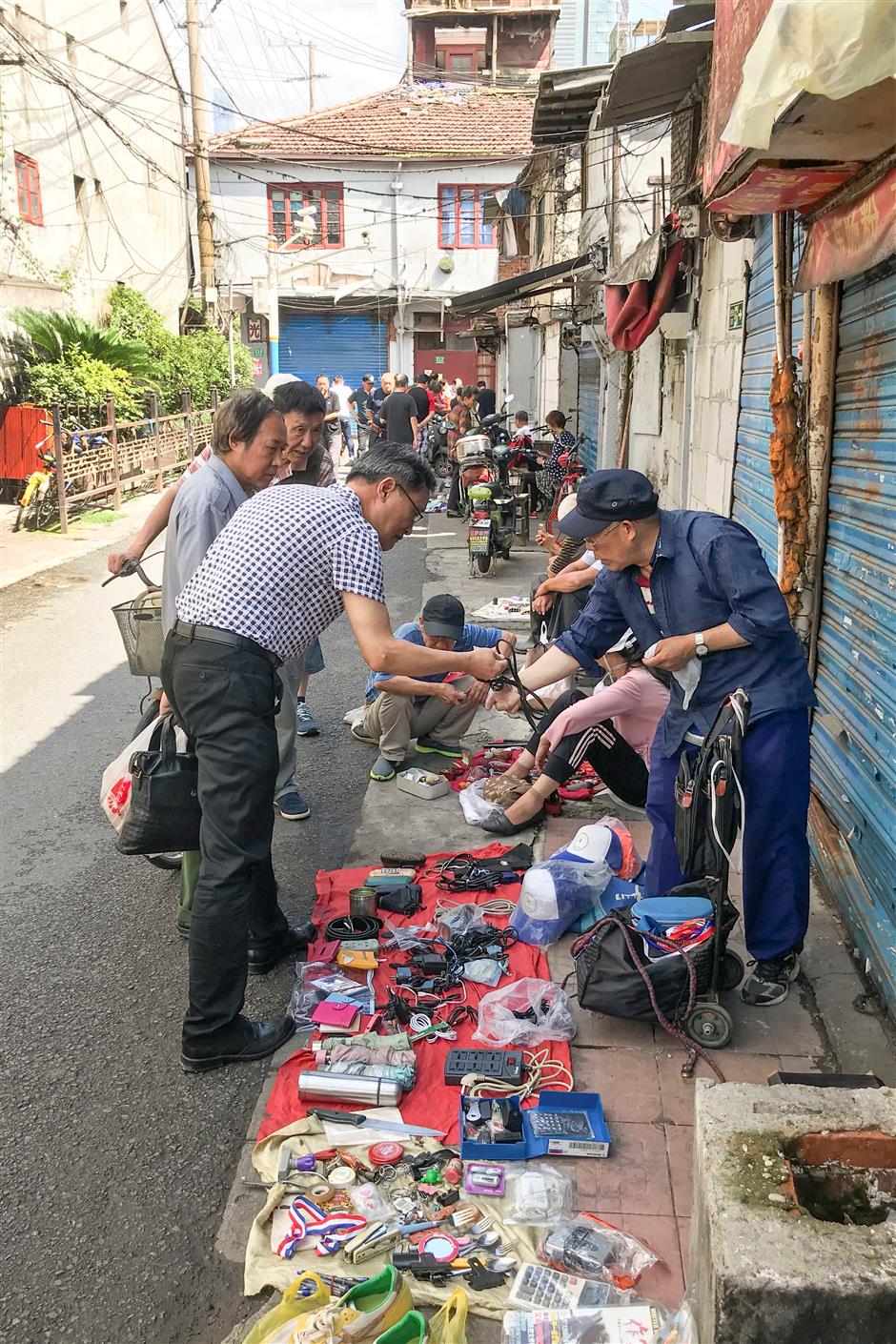 Local residents purchase many of their daily necessities from vendors along Gongjiazhai Road.

Soon we found ourselves in a deserted back alley called Gongjiazhai Road. When we arrived, a man silently walked up and peered at us from head to toe.

I felt a bit scared by his suspicious behavior and was confused about what he was selling because there were only few men and three rusty bicycles in the alley. Nothing else.

I quickened my pace and we left the alley.

“My guess is that he’s a trader selling stolen bicycles,” Shen says. “I heard of one person finding his stolen bike in the alley. The traders hide the bicycles in local shikumen (stone-gated) residences.”

Returning to Qiujiang Road, Shen led me to a bazaar called Shanghai Audio & Video City. Its name was a bit misleading. Visitors can find anything from cameras to clothes in the semi-outdoor market.

We saw many foreigners. Some were obviously tourists, taking photos of local life. Others were merchants, presumably in the import-export business.

Most of the Chinese shopkeepers in the market have some grasp of conversational English, which makes it easier for foreign customers to transact business. However, Shen says buyers need to beware. 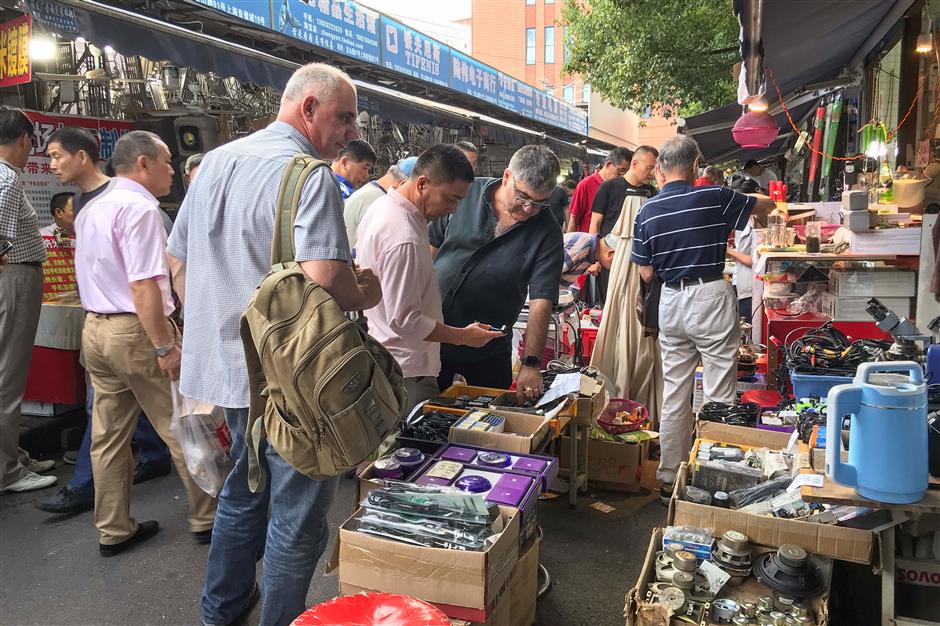 Everyone loves a flea market, including foreign tourists who are drawn to the Shanghai Audio and Video City bazaar. 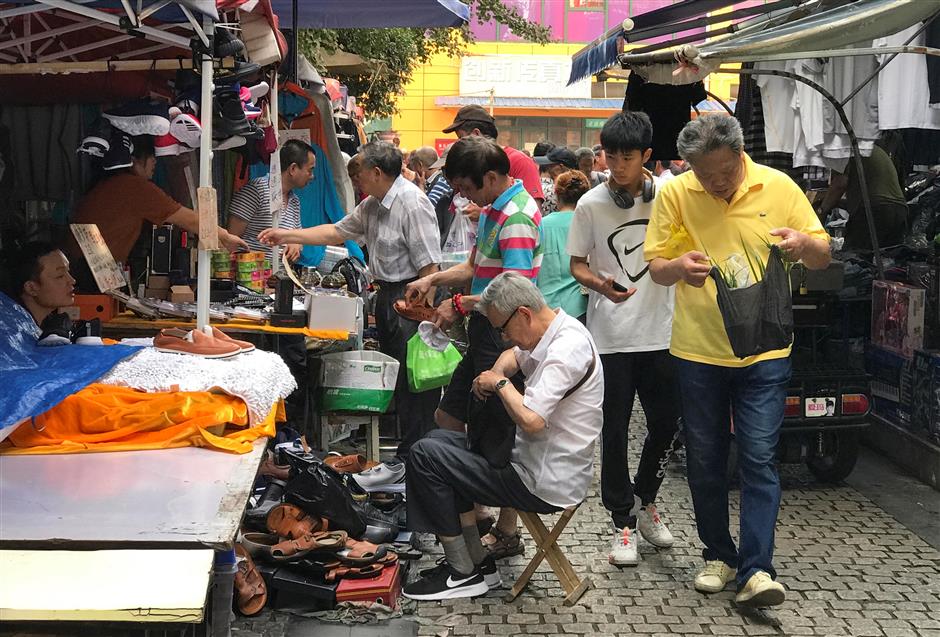 The bazaar sells practically everything you could think of buying.

“If you want to buy a mobile phone, remember to bring a USB cable and a power bank in case an unscrupulous trader is trying to sell ones in poor quality and uses out-of-order cell phones as an excuse,” he says.

Price can vary considerably, he adds. “You need to bargain with the vendors,” Shen says. “And don’t buy anything you are unfamiliar with because you might end up with substandard junk.”

According to local authorities, the disorderly environment of Qiujiang Road will be cleaned up. Unlicensed shops will be shuttered, and trade in counterfeit goods will be stopped. People will see Qiujiang Road in a fresh light soon, they claimed.

The day after our tour, Shen sent me a photo of one of the shops we had visited. Its entrance had been cemented overnight, and official announcements on the wall advised of a new location for the shop. “I still believe that some of the old shops will remain, and I will continue to come here to ramble about,” says Shen. 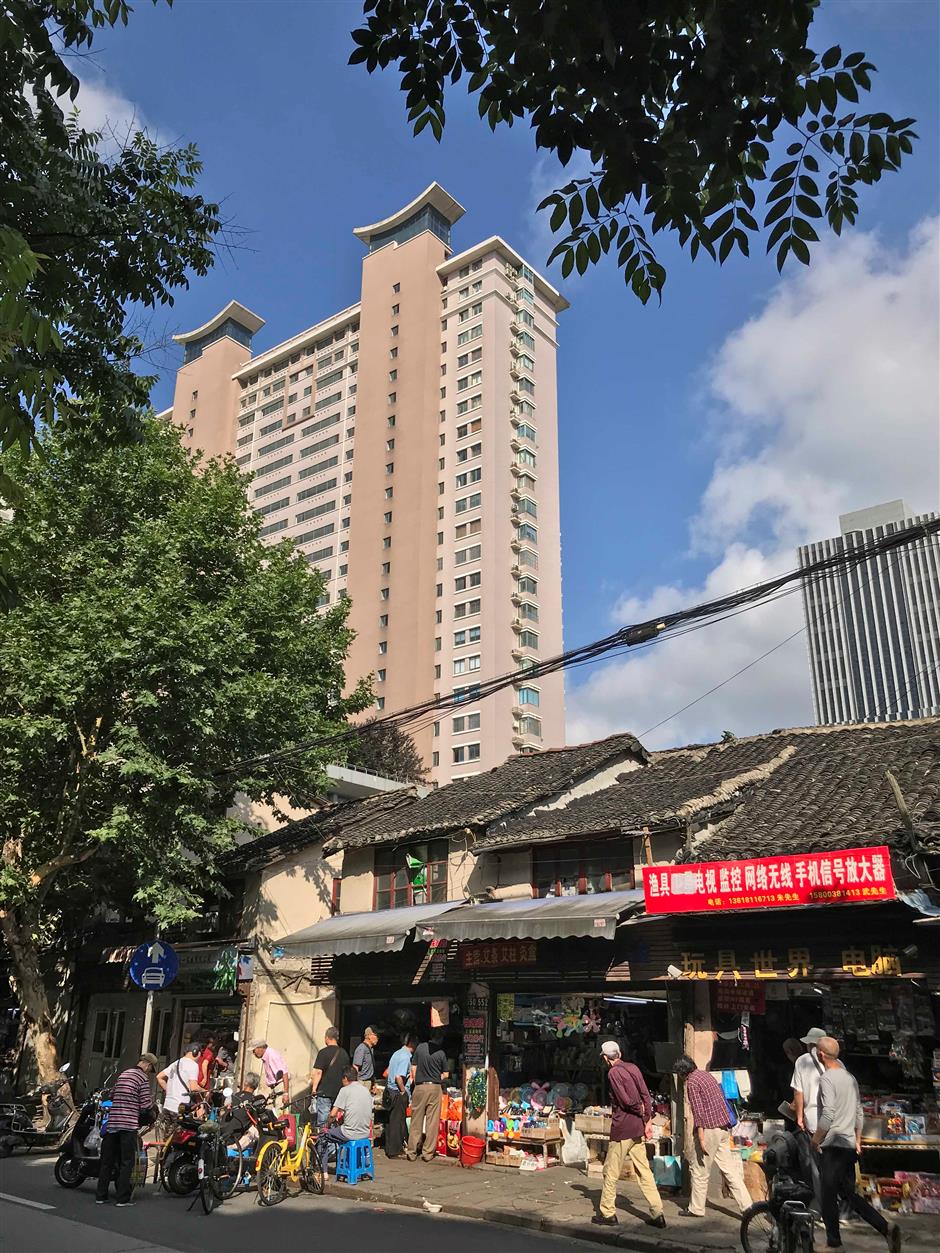 A modern building looms behind Qiujiang Road, where jumbled commerce stands in contrast to urban decorum. 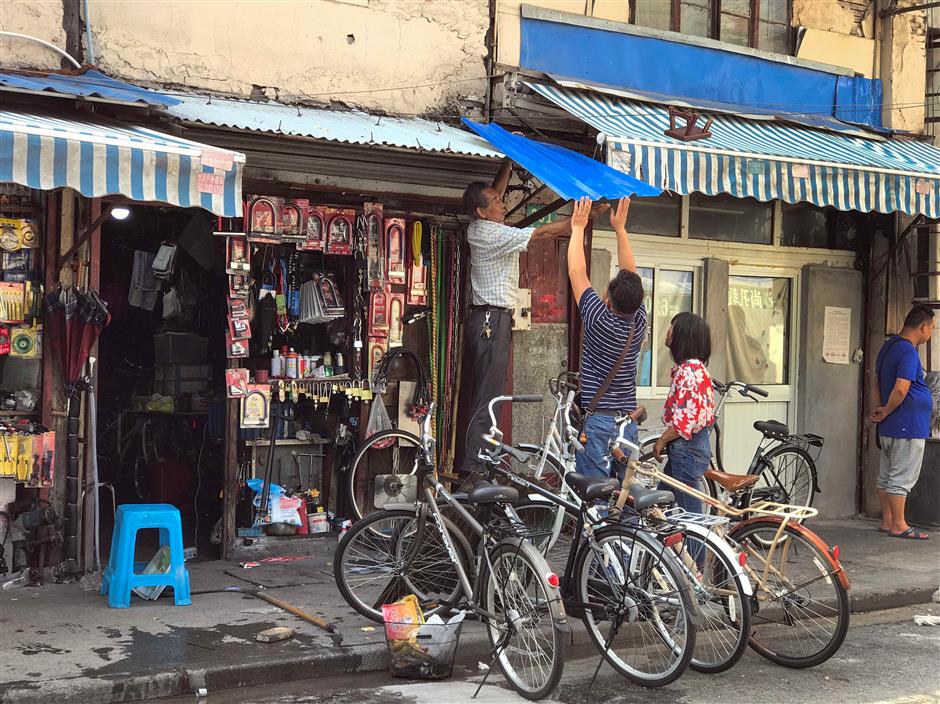