Havana looking to rejuvenate itself

Havana could be compared to the colorful 1950s classic American cars that fill its roads: an object of desire for historians and tourists alike.

To walk through its streets is to take a step back in time.

Run-down homes show signs of salt erosion as waves from the Caribbean Sea batter away at the city’s seawall, while at the day’s end the setting sun paints the sky orange.

Despite the visual signs of deterioration, Havana is spiritually alive.

The Cuban capital will celebrate 500 years in 2019, with an urban restoration plan aiming to give space to modernity while maintaining respect for its vintage character.

Old American cars drive along Havana’s Malecon. The Cuban capital is an object of desire for historians and tourists. It will celebrate its 500th anniversary next year, with plans to reform the town center, modernize the city while respecting Havana’s classical structures and buildings.

“Havana remains frozen in time. The revolution’s aims were to look after the country,” said city historian Eusebio Leal, who’s in charge of restoring the cultural center.

“Undeniably there’s been a cost. When you go around you can see the city’s damaged and covered by a veil of decadence.

But Leal insists the city has much greater depth than simple aesthetic beauty.

“Havana is not just a romantic ruin, nor a city of classic American cars, or a city of dancers and palm trees. It’s a city of intense culture,” he said.

“What’s surprising is that there isn’t enough time to sample the cultural life that extends from ballet festivals to book festivals, from historic cities to jazz. And its plastic arts are amongst the most desired in the world by collectors.” 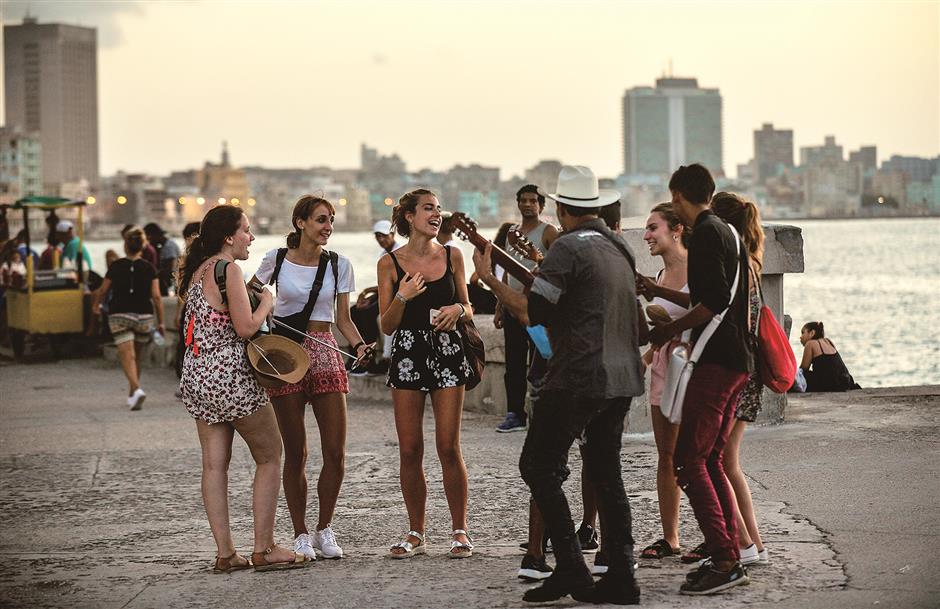 Tourists surround Cuban musicians at the Malecon in Havana.

The neo-baroque Great Theater of Havana Alicia Alonso, home to the National Ballet and guarded by marble statues, and the majestic Capitolio building with its impressive cupola really stand out, as does the music that greets visitors on every street corner.

But the landscape has started to change, not least since the country eased open its doors to foreign investment, with luxury stores and brands, restaurants and hotels slipping into historic buildings and sharing public space with damp, old rooftop terraces and colonial-style balconies.

“Over the last decade, Havana has seen an injection of large private initiatives, which has given rise to an architectural renaissance and creation of jobs,” said Leal.

The admittance of private enterprise has had a dramatic effect, with 13 percent of the labor force now employed in the private sector. Private hospitals and restaurants cater to tourist demands. 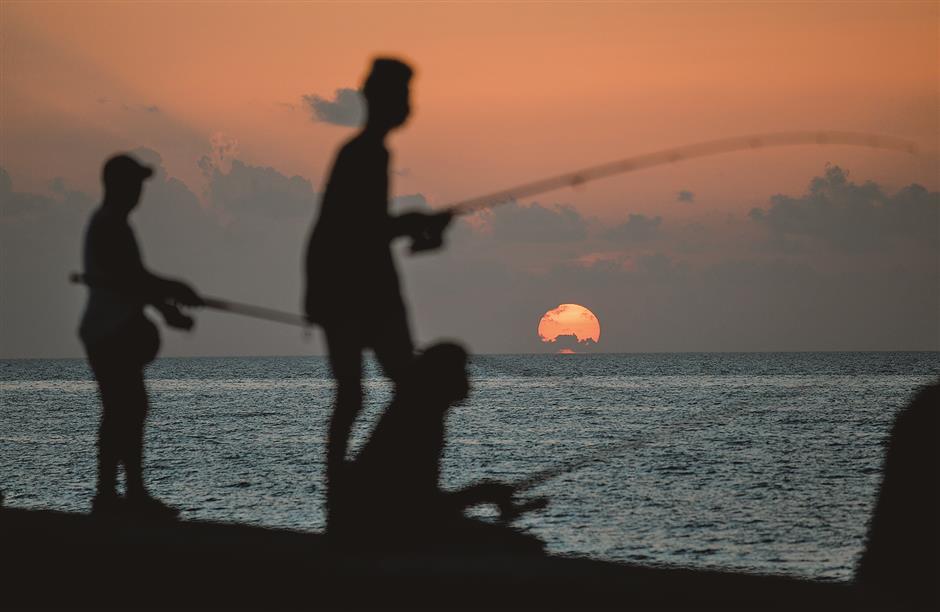 Men fish as the sun sets at the Malecon.

One of the oldest cities in the Americas, Havana was a modern metropolis at the start of the 20th century but physically the city was neglected.

Its streets are poorly maintained and badly lit, but Havana is a much safer city than many other Latin American metropolises. In 2017, it attracted 4.5 million tourists.

“Havana is a joyous and fun city and its people are welcoming and caring. It’s a place where I feel safe wandering its streets,” Brazilian tourist Debora Naves, 41, said.

“However, I think it needs foreign investment to truly show off its cultural riches.”

Leal says it is that “vision of a lively but calm city, a peaceful country without major crime that makes it attractive.” 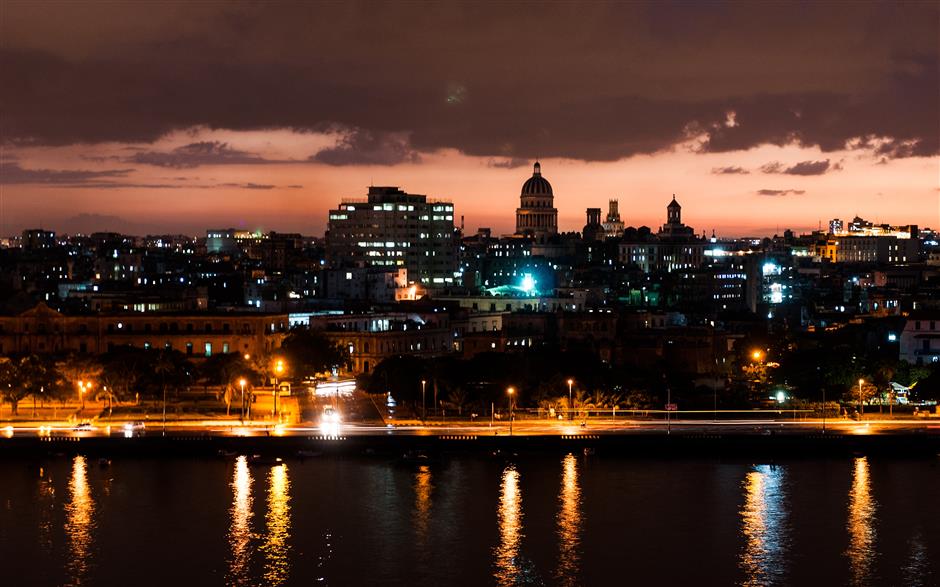 View of Havana at dusk

Another of its major attractions is the fleet of classic cars such as a 1956 Chevrolet Bel Air or a 1952 Dodge Coronet Sierra, lovingly and painstakingly upgraded with modern parts hidden by the retro exterior.

But to do so “costs a lot,” said Yoisel Fernandez, who drives a convertible 1960 Hillman. The world has been opening up slowly to Cuba, Leal said, adding that there is still much more to come.

What the city needs, he added, is for citizens of the future to drive Havana “into a new economic and social age in which its beauty is preserved without limiting modernization.” 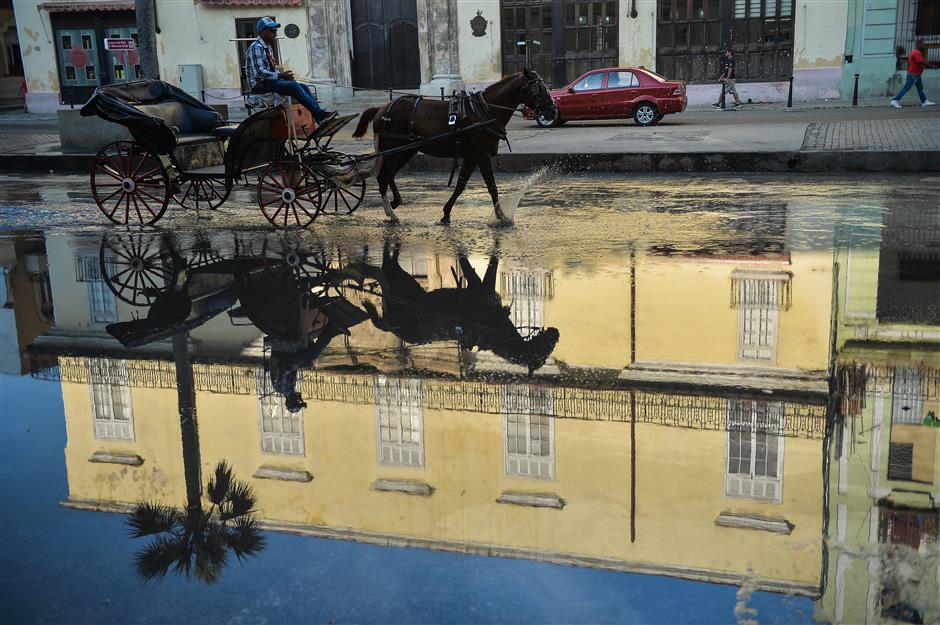 A horse-drawn cart rides in a street of Havana