House of cards for those seeking answers

Gu Jiaye was a professional tarot-reader for two years before she left the shop where she worked, rented a small house on Chongqing Road S. and started her own business.

Her Black Moon Tarot is now one of the most popular tarot-reading shops in the city, thanks to Gu’s “excellent” skills at reading the cards, according to an online review. Black Moon Tarot is housed in the annex of a lane residential building. It is painted all in black and has stained glass windows, which sets the site apart from the other grey-and-white buildings in the complex.

Her reading parlor is open every afternoon. People who go there often unload about their problems in life — relationships, career and finances. Some of them have been Gu’s loyal patrons for years.

“Tarot-reading is not fortune-telling,” Gu says. “The cards you pick reveal the thoughts deep in the bottom of your heart, telling you what has caused the troubles in the past, how things stand now and the inevitable results if you don’t make a change in your life. Those results usually come to pass within half a year.” 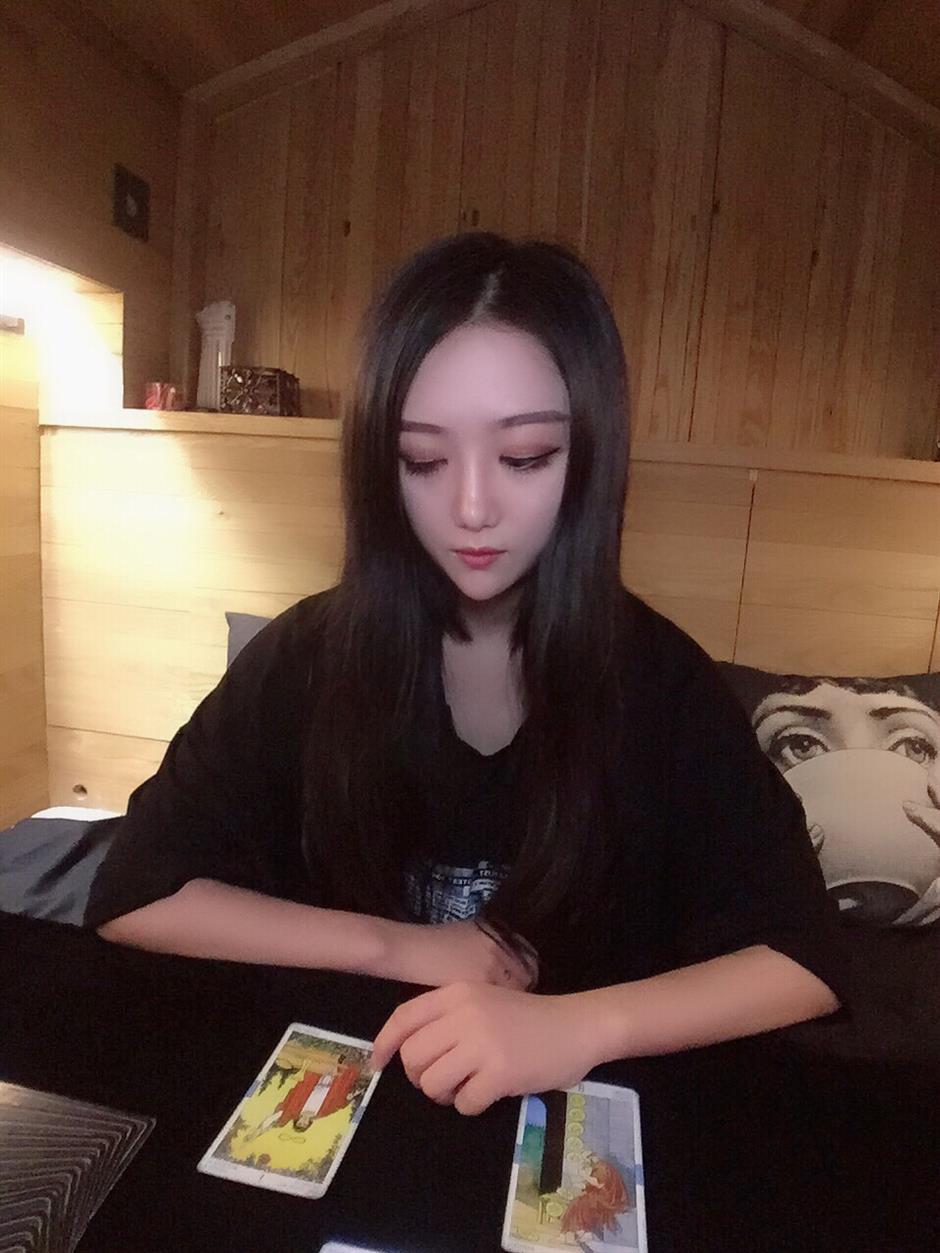 The shop gets nearly 10 patrons a day, mostly women between 20 and 40 years old. Young women come seeking insight into romantic relationships. Men come to learn what the cards say about their careers and money-making potential.

“Some regular patrons visit once every half a year, but some who are very insecure come here every week,” Gu says. “They are eager to find answers in the cards to boost their confidence.”

Gu first encountered tarot cards when she was 14. She passed by a tarot-reading shop, and, out of curiosity, went in. She was fascinated by the atmosphere that greeted her.

“The decor of the shop and the mystic vibes it created seized me at once,” Gu says. “So I decided to sit down and do a reading. I asked a random question, and beyond my wildest expectations, the reader told me exactly what I was thinking.”

After that, Gu visited tarot shops around the city and found a shop in Jing’an District with the best tarot-reader she had ever encountered. She asked the reader, who was also the owner of the shop, if she would mentor her in tarot-reading, but the woman said she was too young and suggested she focus on school work instead. Just before graduating from college, where she was studying professional nursing, Gu happened to walk by the shop again and saw a sign recruiting new staff. She went in to try her luck a second time. This time, the shop owner agreed to take her on.

Tarot cards originated in the mid-15th century in Europe and were used in card games, with the still familiar ace to 10, with the face cards of knave, king and queen. In the late 18th century, occult practitioners adapted the cards for divination, using figures on the cards that are believed to have their origins in ancient Egypt.

Today, tarot cards have largely come to be associated with the New Age movement and are viewed with anything from amusement to fervent belief. It has grown in popularity in China in the past 20 years or so.

“It helps me know myself more,” says one netizen whose screen name is “Kondo-Yu,” who believes in tarot. “It is not fatalism, like many other fortune-telling forms are, but only tells me how I can change myself better.”

Gu’s training at the shop lasted for half a year. It was more boring than she had expected. She had to learn detailed explanations of each card by heart, which added up to the contents of a very thick book. From her mentor, Gu learned how to link the implications of each card and put them into context of each patron’s situation in order to draw logical conclusions.

“The book is a book, and cases are cases,” says Gu. “A good reader can never just stick to theory. It needs long-term practice and the accumulation of experience.”

Gu has also acquired many “card spreads.” Different spreads suit different issues. For example, the card spread for relationships is to draw one card from the top, three in the middle and one from the bottom.

She explains that the two cards from the top and bottom show the current situations of two people in a relationship — perhaps signaling that one of them has grown tired of the involvement and wants to split. The three cards in the middle show the past, current and future situations of the relationship.

The spread for luck in making money, however, is entirely different. With that issue, patrons draw six cards that will tell them how money will favor them in the next six months.

“From the cards, we could see what stops them from making more money,” she says. “For example, they don’t work hard enough or they lack certain skills for their work. I advise them what they should do to change the situation for the better.”

Communicating with patrons is important. Gu says she has met patrons with “difficult” personalities, either too quiet or too anxious, and she needs to gently cajole them into opening up and talking.

“Some people come here because they don’t know who else they can turn to or this is their last hope, so that they might be a little desperate,” she says. “It’s not rare for them to burst into tears when talking.”

Gu says the most rewarding moment of the business occurs when a patron tells her that her explanation of what the cards say is so accurate that a knot in their minds is unraveled.

Her family, however, still doesn’t think tarot-reading makes sense. Gu never done a reading for any of them.

“At first my parents didn’t support me because they thought that I was dabbling in superstition,” Gu says. “They are not so adamant about my business anymore, now that they see that I have my own shop and can support myself. Still, they don’t believe in tarot. I think it’s because they haven’t found their destiny in the cards.”

Gu says her next plan is to open a tarot-themed bar, where like-minded people can gather to share their experiences with tarot and other “mind-cultivating” activities.

“I think tarot-reading could be a lifelong career, although not the usual career path most people take,” she says. 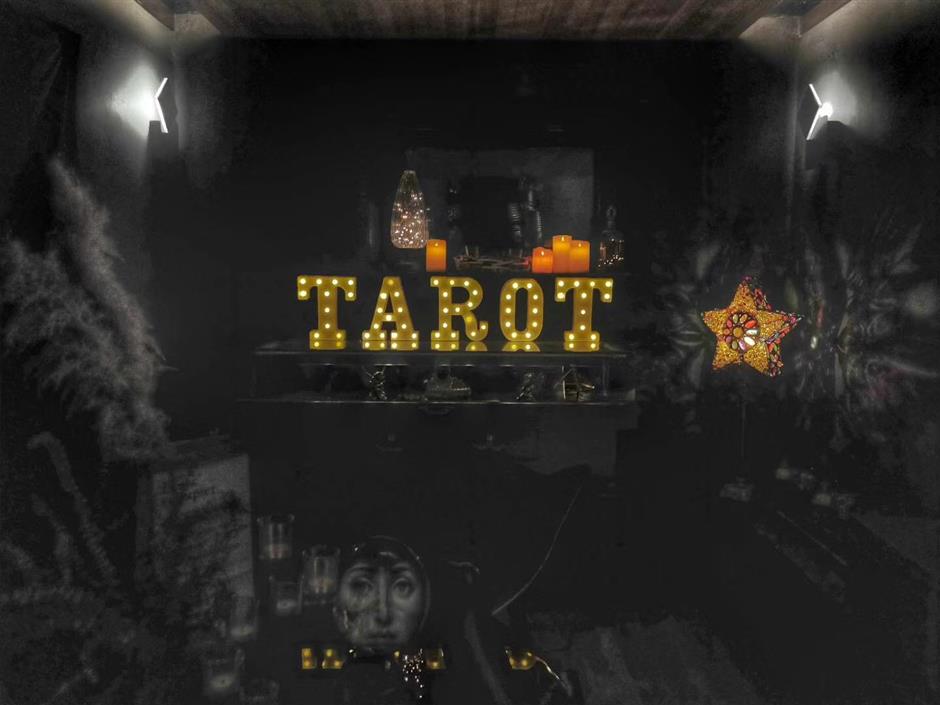