Su Shu, a young entrepreneur based in Yangpu District, developed a mobile platform that allows patients to make appointments with their chosen doctors.

With Mingyizhudao.com, he aims to make every patient in China able to receive the best treatment from the best physicians.

Though this may seem difficult to realize, the platform is well on track to become a popular tool for both patients and doctors across the country, especially with the district’s support for entrepreneurship and innovation.

Over 30,000 expert surgeons, mainly director-level doctors from major hospitals in Shanghai, Beijing and Guangzhou, have been available for appointments on the platform since it was established in 2014.

The company, founded by the 31-year-old postgraduate from the National University of Singapore, has received three rounds of investment with total estimated value of 1.5 billion yuan (US$219 million).

“Yangpu has a unique environment that gathers China's best hi-tech companies, universities and hospitals, which creates the best soil for the e-health platform to grow and develop,” says Su, 31. 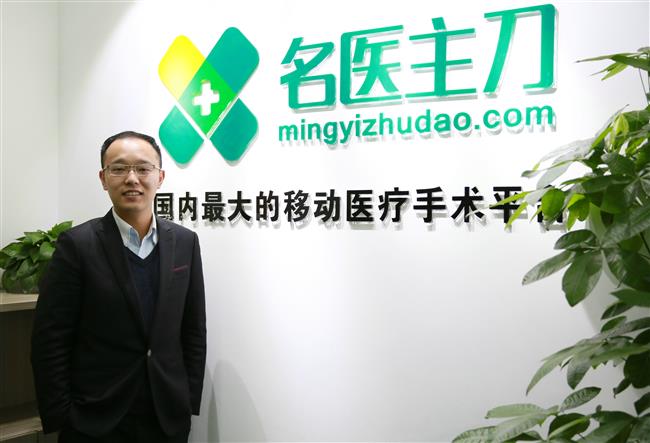 Yangpu District in the city’s northeast is reinventing itself as a pioneer in China’s national strategy to promote mass entrepreneurship and innovation from its previous role as one of the country’s earliest industrial centers.

The district has attracted some 190 top professionals like Su from overseas under the nation’s “Recruitment Program of Global Experts,” accounting for one-fifth of the city’s total. Over 1,200 teams of entrepreneurs have been operating a number of startup firms at 21 scientific parks and 90 innovation parks across the district.

Citywide, Shanghai has developed over 500 innovative parks for startup companies. About 12 percent of residents have taken part in entrepreneurship businesses, a nearly 30 percent increase over 2013.

Yangpu District was once home to China’s earliest paper mill, modern shipyard, water plant, textile mill and coal-gas plant — most of which date back more than a century. Now though, the district has become the city’s only national demonstration zone for public innovation and business startups.

The district government hopes to realize the city government’s plan to turn Shanghai into a global innovation hub by bringing together skilled professionals, technologies, funds and preferential policies geared to startups.

“Yangpu is now planning to become the most crucial hub of innovation in Shanghai by 2040 amid Shanghai’s ambition to become a technology and innovation center of global influence,” says Li Yueqi, Party secretary of Yangpu District.

A batch of “unicorn” startup firms like Su’s have been nurtured in Yangpu, covering all ranges of industries. A company, Liulishuo, for instance, has an app that allows users to speak excellent English via artificial intelligence technology. Another hi-tech company, Ucloud, which was established in 2012 has become a leading cloud service provider.

A commercial rocket startup even says it will launch its first rocket soon.

More than 95 percent of startup firms based in Yangpu have been listed on the capital market, while a number of others are growing rapidly, according to the district government.

The district is home to 14 higher education institutes — including Fudan University, Tongji University and Shanghai University of Finance and Economics — along with over 100 scientific research institutes, so the biggest advantage of Yangpu is its talent pool, Li says.

Yangpu authorities are cooperating with 11 universities within the district and around the city to build a number of key platforms. They have also paired up with 23 local research institutes and enterprises to promote high-tech projects in fields such as the Internet of Things and the application of China’s Beidou Navigation Satellite System. 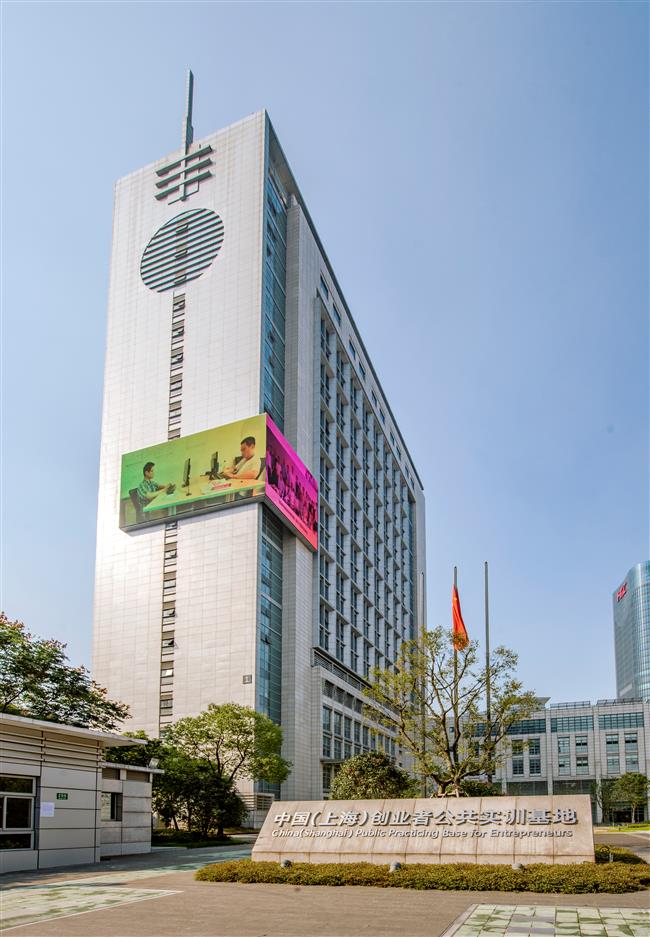 The China (Shanghai) Public Practicing Base for Entrepreneurs

Meanwhile, the district government has been offering supportive policies, services and funds specifically for young entrepreneurs.

Authorities have simplified the administrative application process and issue a series of policies to support startups, attract professionals from both home and abroad, and enhance resource-sharing between officials, universities and enterprises, says Xie Jiangang, director of the district.

In one of these policies, the office rental of startup enterprises in the district will be up to 70 percent lower than the price of nearby office buildings.

In addition, the government will offer legal assistance to the startups, on both commercial affairs and intellectual property rights protections. Under Yangpu’s “Little Giant” entrepreneurship and innovation project, the startup companies with such title will be given 1 million yuan (US$158,770) financial support from the government.

The district is also recruiting hi-tech professionals from Silicon Valley and Seattle in the United States to develop innovation and entrepreneurship in the district. Over 500 foreign entrepreneurs and Chinese students studying abroad attended two recruiting events led by the district’s Party Secretary Li at Stanford University and Global Innovation Exchange in Seattle early this year.

The district government plans to spend 20 million yuan (US$3 million) each year to support overseas professionals willing to start their businesses in Yangpu. Professionals who studied or worked overseas and are deemed top talent will receive a million yuan in assistance fund for startup projects along with 500,000 yuan in housing subsidy.

“Thanks to incentives offered by the Yangpu government, my company’s AI English-teaching software has had over 70 million registered customers,” says Wang Yi, a graduate of Princeton University in the US and founder of Shanghai Liulishuo Information Technology Ltd.

Wang returned to Shanghai in 2015 from a Silicon Valley enterprise and registered the company in Yangpu. His startup firm has employed over 1,000 staff. It has just attracted a new round of investment worth US$100 million.

Two major foundations have also been launched in Yangpu to promote innovation and entrepreneurship around the district.

One foundation, started with 2 billion yuan from the city and district governments, as well as public enterprises, will support innovative and startup programs.

“The foundation is used to attract and guide more public investment into new business and innovative programs that Shanghai needs to build itself into a global center for scientific and technological innovation,” says Ding Huanhuan, deputy director of Yangpu.

The other foundation helps to commercialize research findings.

The 800-meter-long Daxue Road features restaurants, outdoor cafes and tea houses where young entrepreneurs, investors, artists, college students, scholars or scientists exchange their ideas and search for opportunities. The street is not only full of the fragrance of coffee but also abundant with all sorts of resources for entrepreneurship and innovation.

Zhu Minming, a graduate in journalism of Fudan University, opened a studio on the road dedicated to studies of “I Ching,” or “Book of Changes,” in 2017.

Her group of eight members, mostly young graduates from nearby Fudan or Shanghai University of Finance and Economics, developed an artificial intelligence app that can tell fortunes based on the ancient Chinese divination classics.

The Ichingo application on WeChat, which also involves the western constellation, Tarot and feng shui theories has been popular especially among young female users who are perplexed and struggling with their romantic relationships.

Its WeChat account has attracted 200,000 followers since it opened in September 2017. Eighty percent of them are young single females. Customers can also go to Zhu’s studio to let her check their fortunes on site, or pour out feelings to the 23-year-old “intimate sister.”

“It was quite natural for me to open the studio on Daxue Road, which is several minutes’ walk from my university,” Zhu says.

The innovative cafes, stores, creative markets and entrepreneurship environment on the road has brought many young and fashion customers, which match well with the target customers of her niche business, she adds. 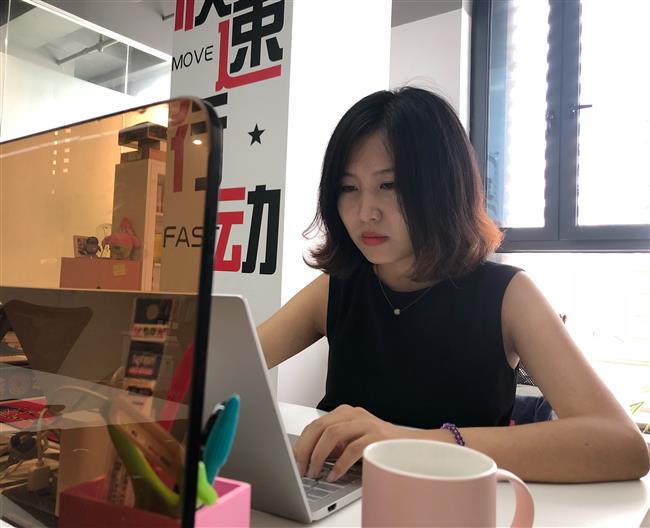 Zhu Minming, founder of the Ichingo app, is a fan of "I Ching."

Yangpu plans to build an Innovation Economy Corridor in its west, a Makers’ Eco-community in its central area and develop its riverside region into a waterfront innovation hub by 2020.

A cluster of innovative parks for public innovation and startups have emerged across the district. Several other parks will be built near Wujiaochang, Changyang Road and around the University of Shanghai for Science and Technology. They will offer affordable rents and access to transport.

The Knowledge & Innovation Community, one of the city’s earliest innovative communities, has become a magnet for people to share knowledge, communicate, seek cooperative opportunities and have fun.

The Hong Kong-based Shui On Land and Yangpu District government started working on the project in the Wujiaochang area in 2003. Total investment is projected to reach over 10 billion yuan and covers a planned development area of 800,000 square meters.

It has created a community where talent from nearby universities, research institutes, enterprises, investment companies and law firms can share and exchange knowledge and ideas.

The management of the community also offers financial assistance, market promotion and loan guarantees for startup enterprises, as well as IPO consulting services. A facility inside the community named Innospace, for instance, offers early-stage incubation space and services for micro-sized enterprises.

Another key innovative park in Yangpu, the Changyang Campus, has become a demonstration project to revitalize a historical industrial site into an innovative zone where the historical ambience is well preserved and young startup firms can operate in former factory buildings with low rents.

The site, renovated from a historic cotton mill built by Japanese businessmen in 1920, was under spotlight in 2017 again to be the main site of the Global Entrepreneurship Week.

Over 18,000 entrepreneurs are based in the Changyang park, including many top professionals from Stanford, Columbia and Tsinghua universities. Over 150 startup firms such as the English practice app Liulishuo and Ucloud are based there.

The University of New South Wales in Australia has also opened its China center at the Changyang Campus. The university’s China headquarters takes charge of recruitment, cooperation, scientific research and knowledge exchange with local universities and enterprises.

Steps away from Daxue Road, seven incubators and the China (Shanghai) Public Practicing Base for Entrepreneurs have been established on Guoding Road E., which turned the street into a fenceless innovation space. It offers low cost and convenient supply as well as enough space and training courses for entrepreneurship and innovation.

Though Su’s e-health businesses has gained nationwide popularity, the founder and CEO still keeps an office at the base where he once struggled to start the business.

“Young entrepreneurs will easily get lost and forget the original intention, and the place reminds me not only to be a successful businessman but also to solve the difficulties for tens of thousands patients who lacks essential medical resources in remote Chinese regions,” Su says.

He began building the e-health platform to benefit patients after his grandfather in his hometown in east China’s Anhui Province failed to receive treatment from the appropriate doctors and died of lung cancer in 2014.

Not far away, Zhu works in her studio from 9am to 10pm every day. She says she enjoys the entrepreneurship as well as the atmosphere beside her alma mater university. She has applied to take part in a startup competition launched by the Yangpu government. The winner can receive 200,000 yuan in subsidies.

“I plan to develop a batch of merchandise based on the mascot of the WeChat application,” Zhu says. “I aim to make Ichingo a popular IP (intellectual property) among the young generation,” she adds.