On Lujiabang Road in Huangpu District, the South Bund Soft Spinning Material Market, a higgledy-piggledy marketplace attracts customers from around the world seeking to order custom-tailored suits and dresses. Among some 300 stalls there, Ji Xiaoyang’s Jason Tailor Shop is one of the most popular.

In Ji’s stall, which occupies no more than 30 square meters, suits and coats are hung on three walls, and fabrics are piled in the middle. On weekdays Ji and his wife Li Hongxia might have some time to sit down and talk, but on weekends, it’s full-on with customers.

“Many of our patrons work with airlines from all around the world,” Ji says. “When they stop over in the city, they come here to order garments. We don’t do any advertising, but they come recommended by word of mouth and by magazines in hotel rooms.”

Customers select preferred fabrics and colors, and Ji measures them up for a custom fit. A team of about 20 tailors sews the orders in a nearby workshop. The garments are usually ready for pickup in about a week. “All of our tailors are old hands,” Ji says. “Some of them are my apprentices. They remind me of myself two decades ago.” 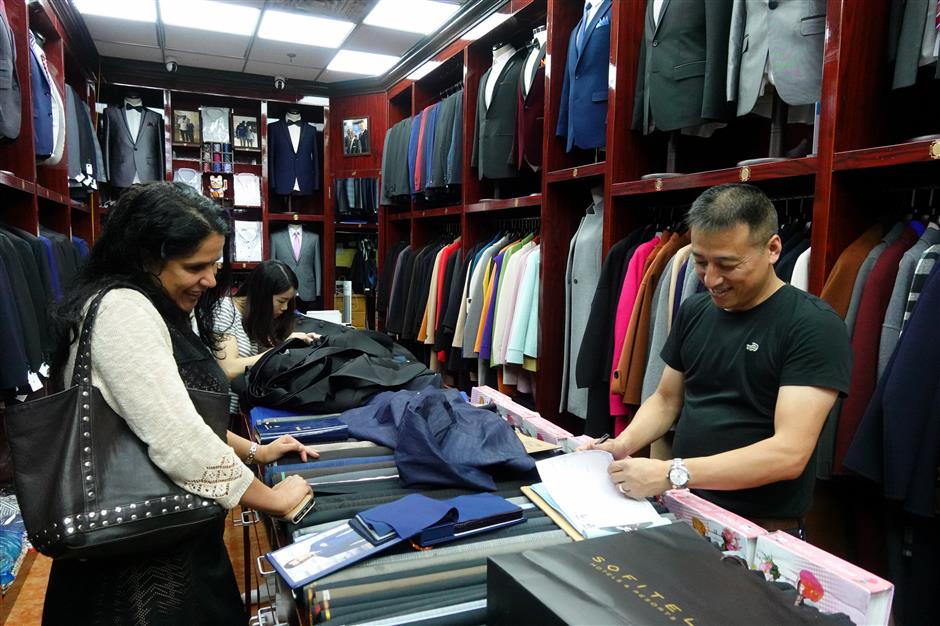 Ji talks to a foreign customer in his shop at the South Bund Soft Spinning Material Market.

Ji learned tailoring from an old master in the early 1990s. Back then, it took an apprentice about two years to master the basics of tailoring, and another four to five years of practice before handling orders independently.

It’s not easy work, according to Ji. One needs to overcome technical difficulties as well as the boredom of often repetitive work.

Ji opened his first shop in Dongjiadu, an area near the City God Temple, where hundreds of custom-tailoring shops once congregated. Li had a shop there, too, and the two tailors met, fell in love and married.

“Back then, we already had many foreign visitors, so I taught myself English,” Ji says. “For a year, I learned basic conversation and the special terms of fashion, texture and tailoring.”

The couple did not lose their regular customers because of the move, however. Some of their patrons — many of them expats living in Shanghai — have been coming to them for more than a decade. The stall became famous without Ji and Li taking particular notice. Sometimes foreign patrons would visit with a magazine in hand and ask if this was the stall described in a story.

“We have some customers whose stay in Shanghai or other cities in China is too limited for a visit to the stall,” Ji says. “In those cases, we go to their hotel rooms to take the order and do the measurements. Then we send them the finished garments by express.”

The stall has had its share of celebrity patrons.

Three pictures placed on a shelf of one of the walls — maybe a bit too high for most people to notice — shows Yao Ming, the retired basketball star of the Houston Rockets. Another has Ji posing with Dominique Wilkins, a retired player for the Atlanta Hawks. For years, Wilkins ordered garments by text messages, and the clothing was sent to him when completed. “We once made suits for an assistant of Yao’s, and I think he introduced other National Basketball Association people to our shop,” Ji says. “They are very friendly and down to earth, not like celebrities at all.”

There was also an actress from Singapore, whose name Ji and Li can’t now remember, who once visited and kept a low profile. “It was a winter, and she was wearing a simple-style white down jacket,” said Li. “Later, I learned from other patrons who recognized her that she was a celebrity. Now her stylist keeps in touch with us.”

The couple always try their best to accommodate what patrons want, even if requests befuddle them a bit.

A customer from the United Kingdom once ordered a white dress, and she loved it so much that she asked for a hat and a pair of shoes to go with it.

“We really didn’t know what to do about it,” Li says. “The hat was barely doable, but shoes? I had to ask for my sister for help because she learned to make cloth shoes from our mother. My sister made a pair of shoes in a very simple style, and the customer loved them.” 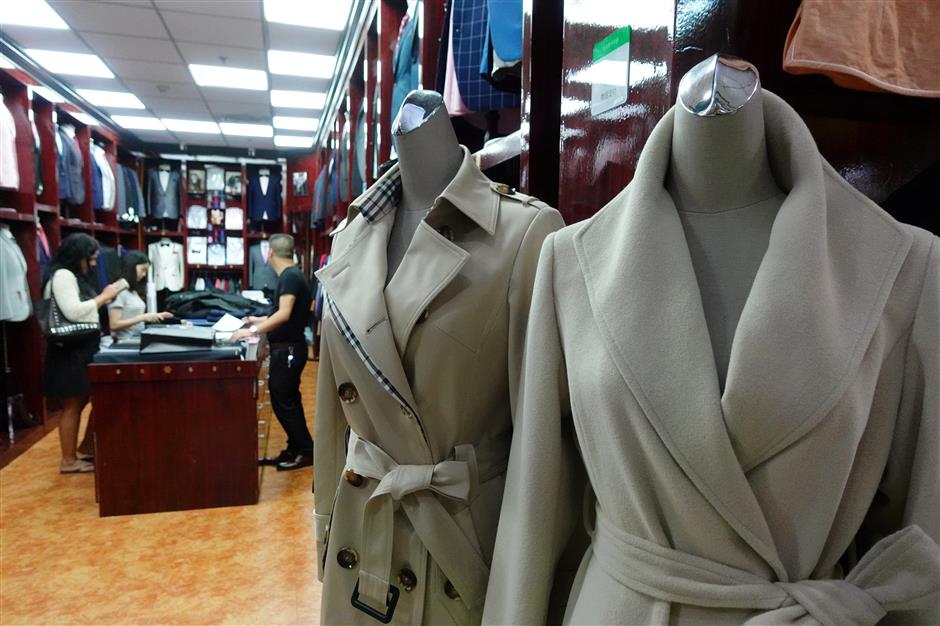 Among some 300 stalls at the South Bund Soft Spinning Material Market, Ji Xiaoyang’s Jason Tailor Shop is one of the most popular.

The couple say Chinese people didn’t share the same opinion of custom-tailored garments with foreigners, but now their ideas have changed.

A long time ago, when fabric was in short supply, there was not enough ready-to-wear clothing in the shops to meet public demand. At that time, people had to find fabric and make their own clothing. Then, after economic reforms, they could finally buy ready-to-wear clothes, which looked more fashionable than homemade clothing.

But now Chinese people are beginning to accept the idea that tailor-made clothes can be more fashionable than those found in shops. They fit better and come in styles and colors of one’s choice.

“Suits, for instance, require very strict measurements if you don’t want to look like you’re wearing a jute bag,” Ji says. “Those sold in stores can provide only a vague size, which may not fit quite right unless you have a perfect, standard figure.”

However, the stall still attracts more foreign patrons than Chinese, which means the couple’s business rises and falls with the tide of global economic conditions.

“To us, the best time was from 2003 to 2008,” Li says. “At that time, the stall was always packed with customers even on weekdays. After the global economic recession in 2008, the business fell off and that was a heavy blow. Now we’re facing the challenge of e-commerce, but we still believe that the tailoring skills and the services we provide are competitive enough.”

To get there: Metro Line 8 to the Laoximen Station near the market. 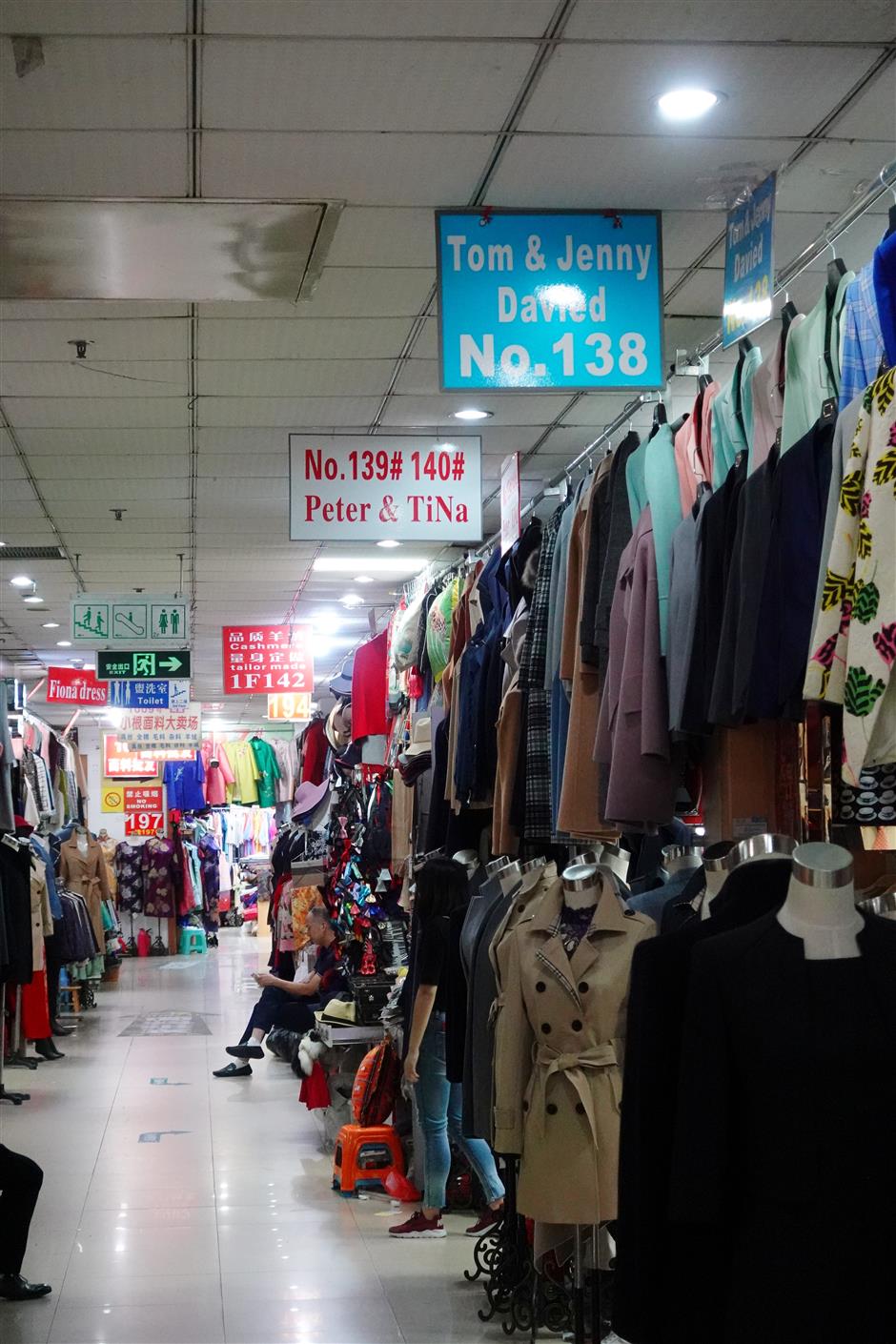