Urban planning experts from home and abroad are to help Suzhou with its part in constructing a culture belt along the Grand Canal.

They are now in the city attending a weeklong workshop that started yesterday for a field survey of the watercourse and its scenic spots, and the city’s culture.

After that, members of the Urban Planning Advisory Team Workshop, including Martin Dubbeling, president of the International Society of City and Regional Planners, Wu Jiang, executive vice president of Tongji University, and a number of domestic and foreign experts in waterfront design, redevelopment, heritage and conservation, urban renewal and delta urbanism will offer their advice on the construction of the Grand Canal National Culture Park (Jiangsu section) in which Suzhou will play an important role.

The Grand Canal, running through 18 cities from Beijing to Hangzhou, links five of China’s main river basins and is the world’s longest man-made waterway. It was once the lifeblood of ancient China.

A large artery carrying the nation’s cultural genes, the canal belongs to the old days, but it is also for today and the future. Along the canal, there are not only numerous historic and cultural relics, and many revolutionary sites, but it also paints a picture of socialist construction and achievements in reform and opening-up.

The Grand Canal is the source that nourishes Chinese culture as well as the source of strength of the Chinese people’s self-confidence.

The Suzhou section flows across the city’s downtown area and could date back to the Spring and Autumn period (770–476 BC). The city’s culture and economy have prospered because of the canal. Even today, thousands of boats make the Suzhou section the busiest in the entire waterway.

It connects north and south and is the foundation of 1,000 years of Suzhou’s cultural prosperity. That’s why Suzhou has such an important role to play in the forthcoming construction.

It has five former watercourses and seven heritage sites closely related to the canal and nine classic gardens on the UNESCO World Heritage list. It also has six items on the World Intangible Cultural Heritage list, such as Kunqu Opera and Chinese instrument guqin, with ties to the canal.

Suzhou is a city that has flourished because of the Grand Canal.

President Xi Jinping has emphasized that its protection is a common responsibility of all regions along its length.

Beijing, Tianjin and Suzhou’s sisters in Jiangsu Province — Yangzhou, Changzhou, Zhenjiang, Huai’an and Xuzhou — have already mapped out their own blueprints for cultural belt construction. Suzhou, with its exclusive historical and cultural resources, feels it has a “glorious mission” to build the “best part” of the canal’s cultural belt.

The Grand Canal is not a linear flow in Suzhou, but a network of waterways and a symbiosis with the city. The Suzhou section stretches 82 kilometers.

'Work with a cultural vision'

The 82-kilometer Suzhou section runs from Wuqi Bridge in Wangting in the north to Youchedun in Wujiang in the south and has a history of 2,000 years.

It has flowed ceaselessly through the vicissitudes of the city’s history.

“We should systematically promote the work with a cultural vision and in accordance with the laws of culture,” said Zhou Naixiang, Party secretary of Suzhou.

Zhou vowed to accelerate construction of a Grand Canal museum cluster, promote the revitalization of traditional handicrafts, strengthen the planning of literary and artistic works about the canal, and create a number of masterpieces reflecting its culture.

Meanwhile, the development of traditional industries, such as silk, embroidery, jade carving and mahogany furniture, is also on the agenda, together with the construction of creative industries along the canal.

The construction of the cultural belt is a project that involves waterway transport, heritage protection, cultural heritage, ecological building and economic development.

The Grand Canal is not a linear flow in Suzhou, but a network of waterways and a symbiosis with the city.

Hence, its overall development is particularly remarkable in the planning, according to Zhou. “To inherit in the protection, utilize in the inheritance and create sustainable development in the utilization.”

Suzhou is making efforts to become the major site of the Grand Canal National Culture Park. A number of facilities as well as several canal heritage parks will be built to allow people access to the canal and allow harmonious coexistence of people with the canal and the canal with the city. They will also let more people appreciate the beauty of Suzhou as a watertown. 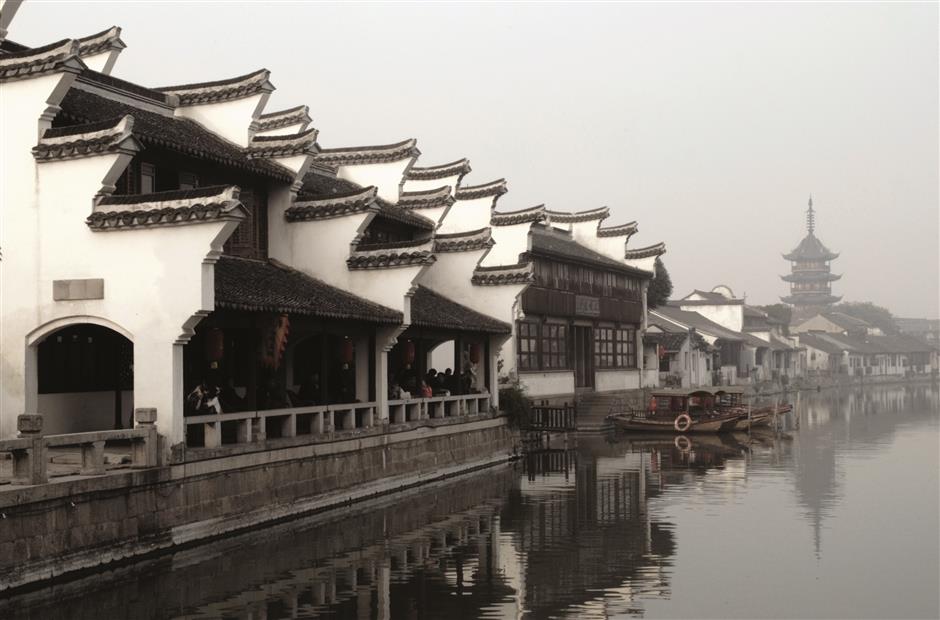 Visitors are fascinated by the beauty of Suzhou as a watertown. The scenic city, with the help of experts from home and abroad, will play an important role in building the Jiangsu section of the Grand Canal National Culture Park.

Reinforcement of canal levee is a major task and foundation of the construction. Waterway transport, hydraulic facilities, embankment roads and natural ecology are the substantial carriers of the canal culture, and also the prerequisite for the construction of the cultural belt.

Reinforcement of the canal’s floodbanks is by no means a simple water conservancy project. It will run across Suzhou’s Xiangcheng, Gusu, Gaoxin, Wuzhong and Wujiang districts and involve a number of areas including urban planning, land use, landscaping, municipal facilities and cultural heritage.

The design of the levee reinforcement needs to be coordinated with other specific plans and with the scenic spots alongside.

The future Suzhou section is expected to become a belt of tourism and leisure sightseeing, a flood control and drainage safety belt and a sponge city construction demonstration belt.

Suzhou will strengthen environmental monitoring and industrial pollution control along the canal with a focus on domestic pollution, pollution caused by the overuse of fertilizers and pesticides and pollution from canal traffic.

The city will also carry out environmental rehabilitation along the canal, demolish illegal buildings and get rid of illegal plantations. A man-made forest and wetlands alongside will protect the ecology of the Suzhou section.

Special Reports
﻿
61872
,
61863
,
Guide for overseas Chinese students during COVID-19 pandemic
A cemetery that celebrates life and death
Nile threatened by waste, warming, dam
Enchanting abode in idyllic tranquility
Connecting nature, culture and people with design
Fancy footwork: An embroiderer finds her niche
How overseas Shanghainese go through outbreak
Counseling eases psychological toll of outbreak
'Support troops' guard the doors to the city
A guardian of the light ... and of hope for Wuhan
EXPLORE SHINE