Planners set out their grand vision for Suzhou

From Suzhou’s Shantang Street to Panmen Gate, a section of 3.1-kilometer watercourse is expected to become one of the best parts of the Grand Canal Cultural Belt due to its exclusive advantages and a plan taking shape with the participation of experts from around the world.

The areas along both sides of the watercourse, which occupy 1.5 square kilometers, were the focus of a field survey by experts to explore the best way forward for the construction of the Grand Canal National Cultural Park (Jiangsu section).

Construction is aimed at promoting the integration of historical and cultural preservation with modern urban functions, protecting existing culture and diversity, realizing the protection of cultural relics and cultural resources, and highlighting Chinese culture.

The plan also aims to promote regional revitalization and the vitality of urban spaces.

The park will be a combination of historical and cultural landscapes and contemporary practice and become a characteristic cultural landmark.

At the same time, it will improve the urban layout and waterfront to create new attractions.

Traffic along the canal will be optimized and public spaces created.

Heritage protection, the extension of functions and the better utilization of public space was the theme of the Urban Planning Advisory Team Workshop at the weekend.

Experts are working together on the design concept, construction strategy and management of the park as well as plans and studies for the preservation, inheritance and utilization of the iconic watercourse.

Currently, the Suzhou section of the Grand Canal sees more than 6,000 ships and boats going to and fro. Meanwhile, the city is a favorite tourist destination, attracting 6.6 million tourists during the past National Day holiday.

That’s why how to deal with the relationship between urban construction and cultural heritage protection along the Grand Canal is the topic many experts are concerned about. 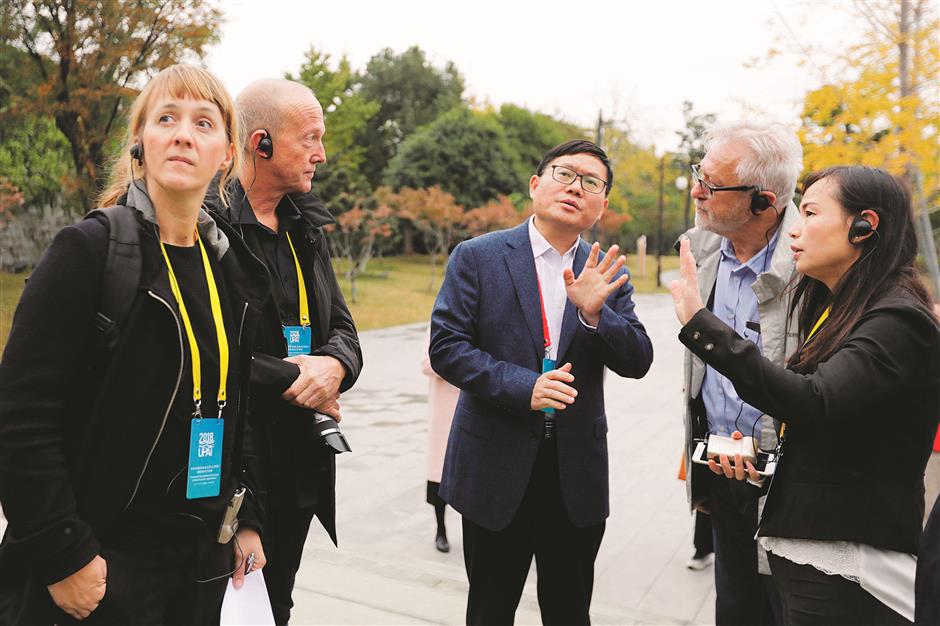 Experts join a field survey of the 3.1-kilometer watercourse between Shantang Street and Panmen Gate.

“I found the Suzhou section of the Grand Canal very well protected, and I was surprised that the Grand Canal is still in use today,” said Dushko Bogunovich from Unitec Institute of Technology, New Zealand.

Milena Lvkovic said that dealing with the relationship between the canal and the city was very important.

“There are also canals in my home country, the Netherlands. We hope to provide some experience for the construction of the Grand Canal Cultural Park in China,” said Lvkovic, vice president of the International Society of City and Regional Planners.

From Panmen Gate to Shantang Street, the earliest section of the Grand Canal, there are four historic wall gates, and a continuous footpath has been established on the inner edge.

“The path is very narrow right now and I think it has to be widened,” said John Echlin from Echlin Advisory. Echlin is an expert in waterfront redevelopment and mixed-use programming.

“To accommodate disabled people in wheelchairs, different paths for different people, for example, to provide something more generous for a family with small children and maybe for sport and recreation also.”

Compared to cities in the Netherlands, Suzhou is a garden city with a more complicated network of watercourses and greenery, said Lvkovic.

“The Grand Canal not only has a sightseeing function, but also has the function of urban infrastructure undertaken by the watercourse system which should be sorted out for sustainable development,” said Lvkovic.

She also suggested upgrading the businesses along the canal. “Less commercialized but more eco-friendly and educational,” she said, adding that the bottleneck of traffic in the vicinity should also be solved to attract more people to the waterfront.

“Many historical sites along the watercourse just let us feel it is the past. The beauty of the design is the result of human activity but now it is like a museum with no more functional activities.

“We should reactivate them and let them have economic and social functions. For example, try to develop some economic activities here, maybe some pocket parks for local people to feel that it’s alive.”

Mei Yaolin, president of the Jiangsu Institute of Urban Planning and Design, said the advice from foreign experts was helpful and it was worth learning from international practice.

Mei said the section between Shantang Street and Panmen Gate will be a major site for an exhibition about the the future Grand Canal National Cultural Park (Jiangsu section).

The Suzhou section of the Grand Canal has the longest history, the richest cultural relics and is the best utilized.

Luo Chao, head of urban and rural planning at Suzhou University of Science and Technology, has long studied Suzhou’s history and culture.

“The city develops and there are new demands and new facilities accordingly. But the new needs cannot go against the fundamental rules of heritage protection,” Luo said. 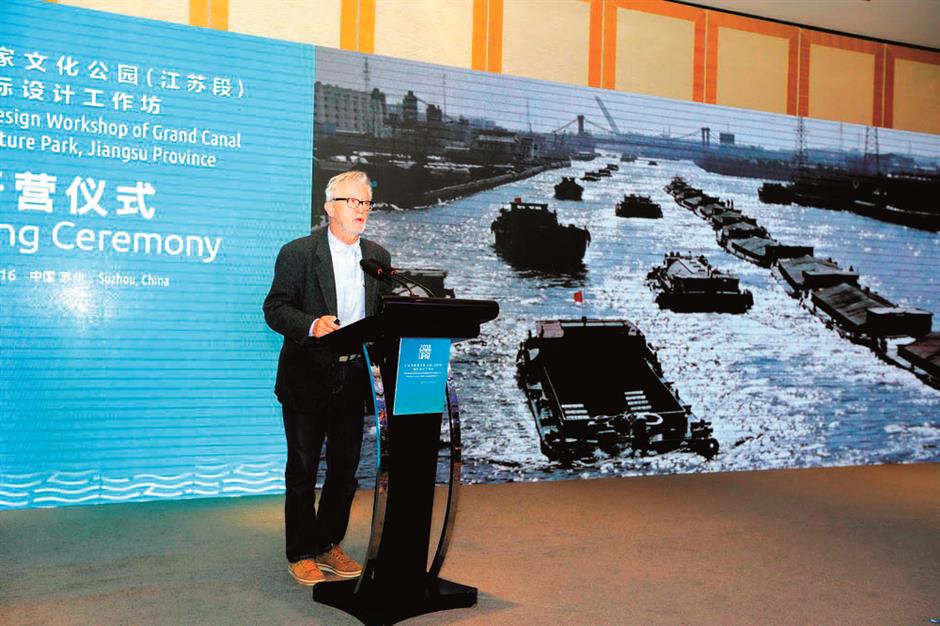 Dushko Bogunovich from Unitec Institute of Technology, New Zealand, delivers a keynote speech at the opening ceremony of the Urban Planning Advisory Team Workshop on November 16. Bogunovich is team leader of the workshop and an expert of waterfront design and sustainability strategic urban design.