After four field surveys, five rounds of brainstorming and hundreds of sketches, a panel of world urban planning experts concluded that the construction of Grand Canal National Cultural Park (Jiangsu section) would be an effective way to protect the canal as a cultural heritage site.

The plan is to turn the Grand Canal National Cultural Park into a sanctuary of cultural icons, historical events and festival of folk arts and customs, among other things, in connection with the canal.

The project will provide a central, readily accessible facility where visitors can learn about the area’s resources, foster public support and appreciate the Grand Canal’s cultural resources.

Advanced technology will be introduced sensitive to cultural heritage, and a comprehensive protection system will be established.

During the weeklong Urban Planning Advisory Team Workshop which started on November 11, experts carried out field surveys from Shantang Street to Panmen Gate and studied in detail the area around the 3.1-kilometer watercourse, which is one of the best preserved sections of the Grand Canal.

The Panmen Gate section of the Grand Canal

“The cultural heritage of the Suzhou section of the Grand Canal is very close to the urban residential area,” said John Echlin from Echlin Advisory, who suggested building sculptures to reflect the cultural atmosphere should be part of the plan.

Echlin added that the Shantang Street sidewalk could be widened and suggested more water activities at the canal to generate more excitement and interest.

“Suzhou is a city coexisting with the canal, and the gene of the canal flows in the long history of the city,” said Mei Yaolin, president of Jiangu Institute of Urban Planning and Design, who lives beside the Grand Canal.

Mei says the future Grand Canal National Cultural Park will be human oriented to let those, who live alongside it, share it with the people and the city.

The vast Beijing-Hangzhou Grand Canal is a precious cultural gift to China left by its ancestors. Over the past thousands of years, Suzhou has rapidly developed into a city of extended waterways and clusters of business people who have relied on the Grand Canal for industry and commerce. The hope is that this continues and the city prospers generation after generation.

When the Grand Canal was inscribed on the UNESCO World Heritage List in June 2014, seven watercourses and five heritage sites in Suzhou were included.

In July, Zhou Naixiang, Party secretary of Suzhou, vowed to build the best part of the Grand Canal Cultural Belt and to create a “Suzhou Model” and fulfill a “Suzhou Duty” in the construction of the cultural belt in line with President Xi Jinping’s instruction. 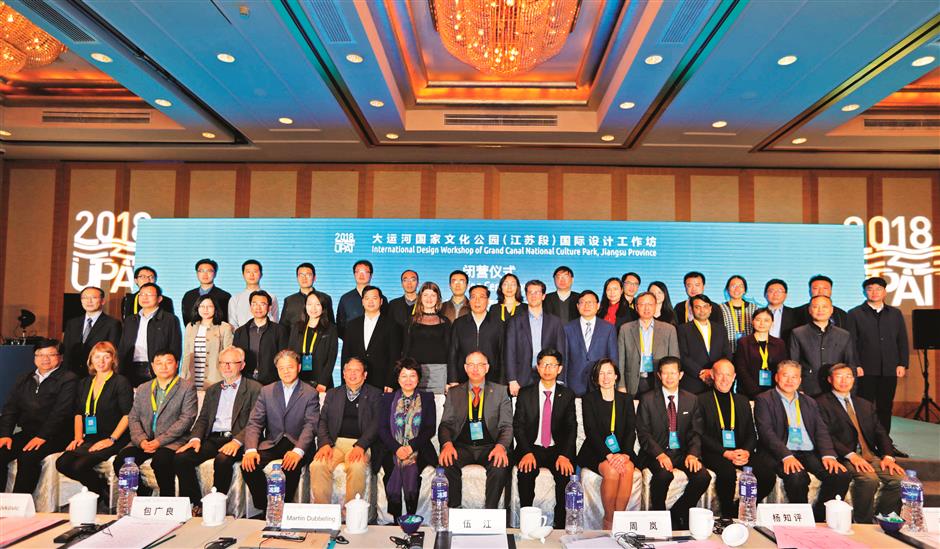 The Grand Canal touches the coordinated development of Beijing, Tianjin and Hebei Province to the north and the economic belt and the integration of Yangtze River Delta to the south and runs across regions taking part in the Belt and Road Initiative.

For Suzhou, to fulfill its “Suzhou Duty” in the construction of the Grand Canal Cultural Belt, and to creat new cultural landmarks and boost culture and tourism, it will need to initiate high-quality developments in the city.

Suzhou is rich in resources and has 60 tangible and 10 intangible cultural heritage sites along the Grand Canal.

“The whole city is like a canal culture museum,” said Li Jie, director of the Administration of Culture, Press, Publication, Radio and Television of Suzhou.

It is Suzhou’s good fortune to be a city on the Grand Canal. Regardless of historical change, the canal’s water has always nourished Suzhou and its people.

It is the city’s destiny to build the Suzhou section of the Grand Canal into a world-class cultural highland reflecting the past and the present and to better demonstrate the unique charms of Wu culture.

Special Reports
ADVERTISEMENT
61872
,
61863
,
Guide for overseas Chinese students during COVID-19 pandemic
A cemetery that celebrates life and death
Nile threatened by waste, warming, dam
Enchanting abode in idyllic tranquility
Connecting nature, culture and people with design
Fancy footwork: An embroiderer finds her niche
How overseas Shanghainese go through outbreak
Counseling eases psychological toll of outbreak
'Support troops' guard the doors to the city
A guardian of the light ... and of hope for Wuhan
EXPLORE SHINE