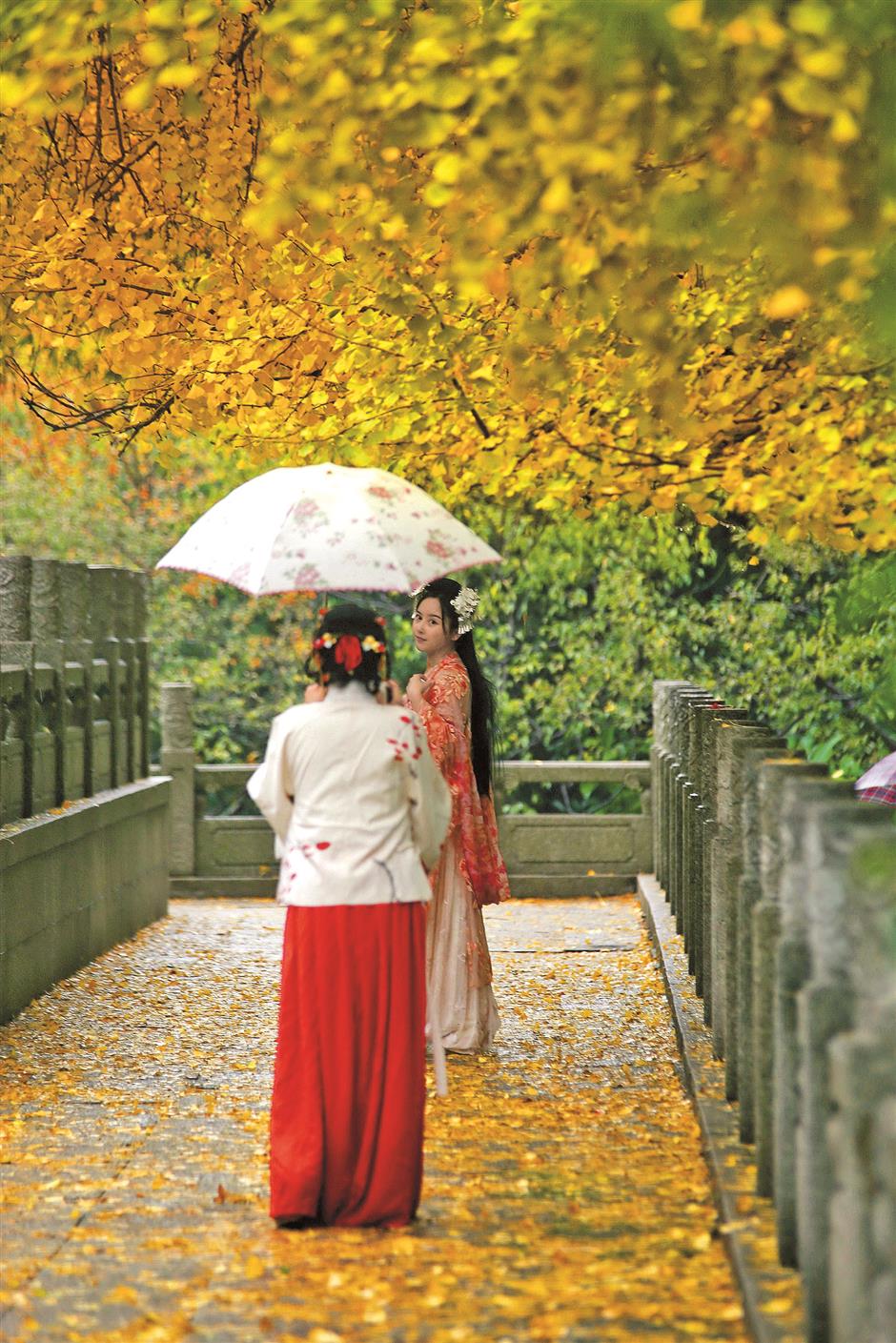 HER  clothes are like the floating clouds and her face is like flowers, when the spring breeze brushes banisters and the dew glitters,” ­comes from the poem “Qing Ping Diao,” written by poet Li Bai from the Tang Dynasty (AD 618-907). Readers are not only enraptured by the beauty of Yang Yuhuan, the favorite concubine of Tang emperor Li Longji but also the beauty of her traditional Chinese dresses.

The name hanfu is given to pre-17th century traditional clothing of the Han Chinese, the country’s predominant ethnic group. Now more and more youngsters are falling in love with these pretty, artisanal robes with historical roots.

Hanfu is seeing a revival in interest, with elements related to the design of hanfu introduced in modern clothing styles and erciyuan culture, or a two-dimensional space, a term referring to anime, manga and games.

In the music video of “Yihonglian (Reminiscence of the Red Lotus),” virtual artist Luo Tianyi, the Chinese counterpart of Hatsune Miku, a persona of a Japanese voice-imitated project Vocaloid, who is now a global icon, dresses in a red-and-white hanfu and sings an ancient Chinese-style song.

The revival is also seen in the daily lives of people. During the National Day holiday, people, especially young girls, brighten up the streets and tourist attractions with their hanfu clothing. 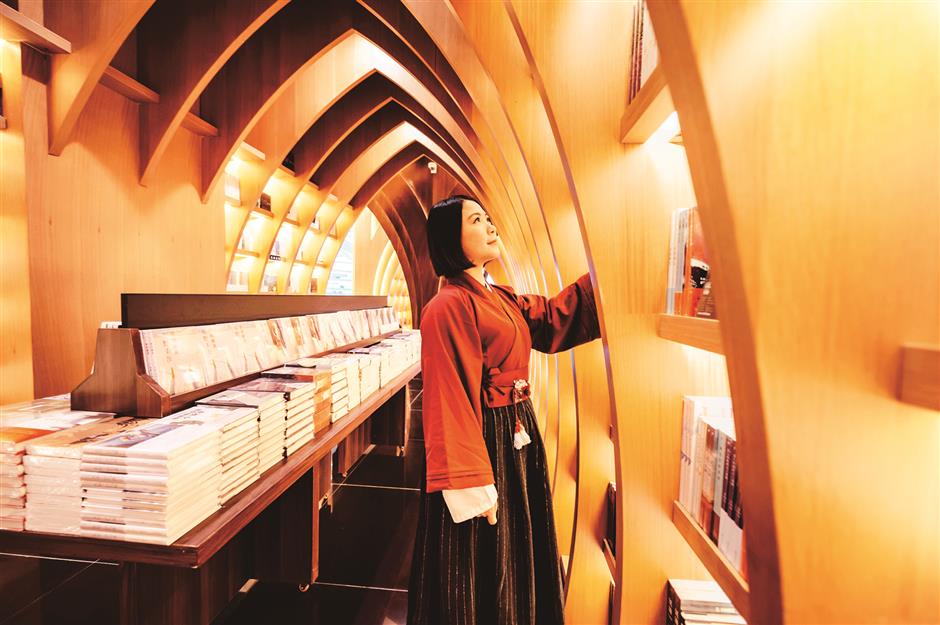 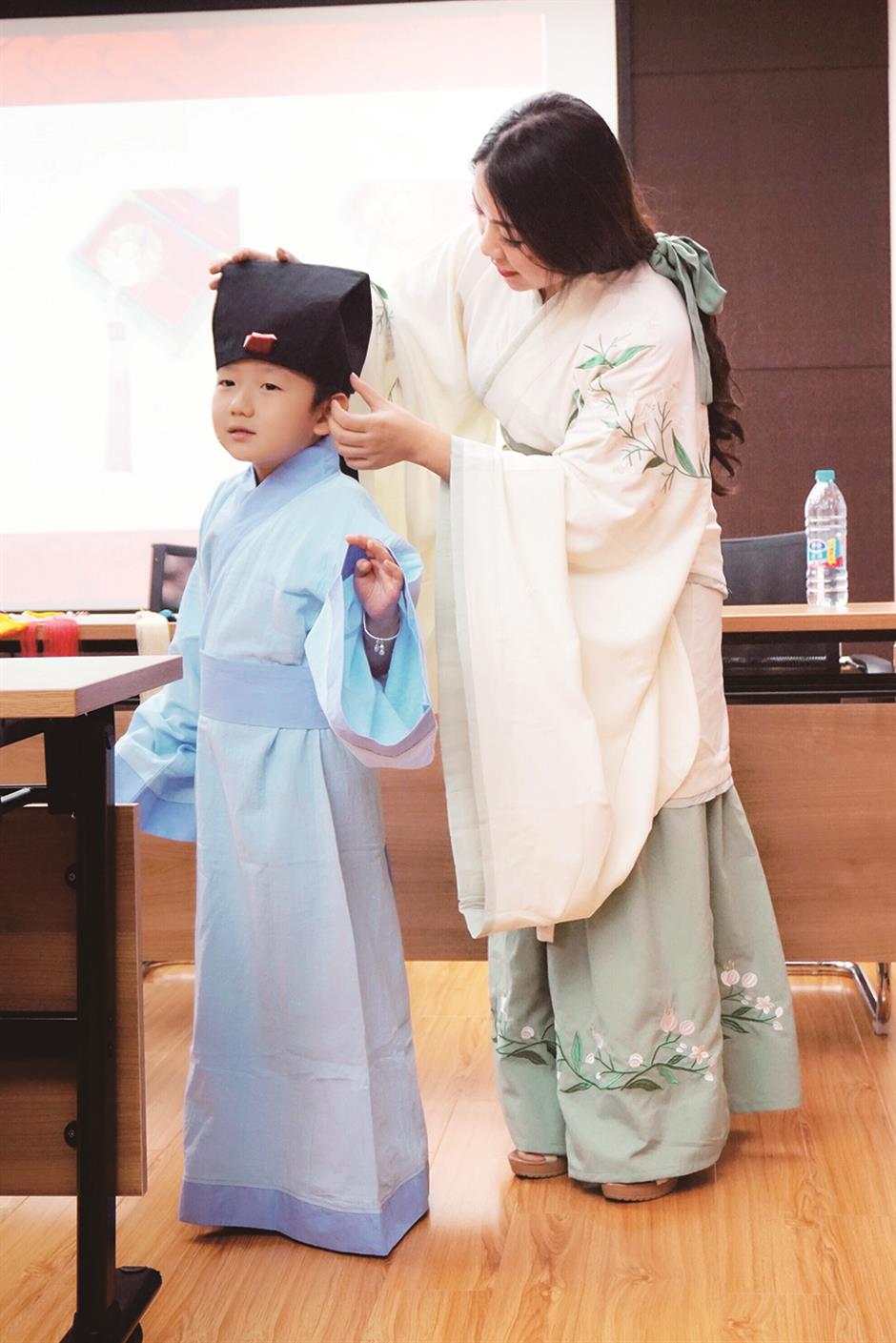 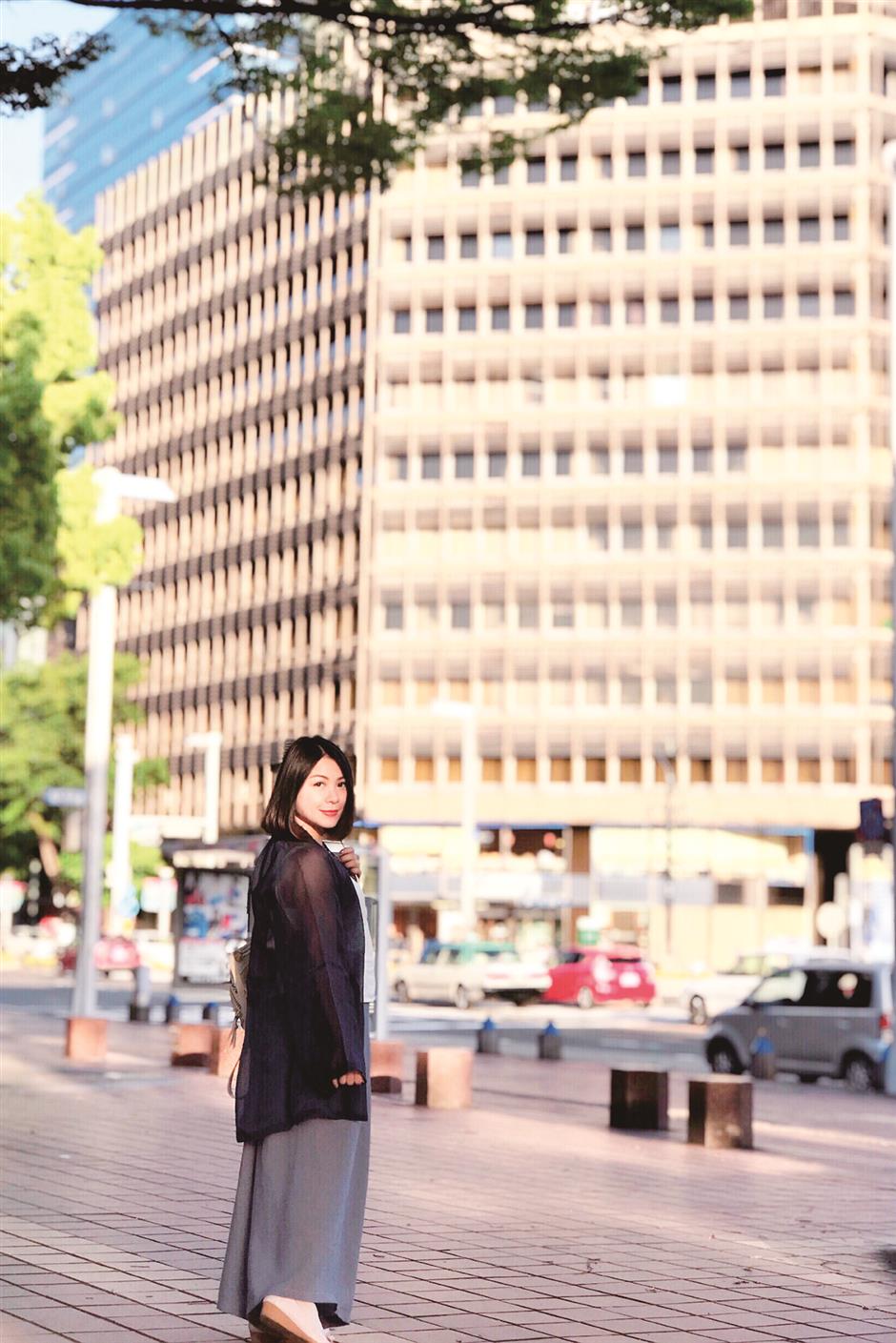 Xu Qinren, a local 29-year-old woman, wears hanfu clothing every day. While others put on shirts and jeans or modern clothes, she dresses herself in ruqun, a wrap-around skirt, and banbi, a form of waistcoat or outerwear worn over a ruqun with half-length sleeves.

“At the very beginning, I saw my friend dressed in hanfu and found it very beautiful,” Xu said. “Later I was taken to some events and then came to understand that there are deeper things behind these clothes, like Chinese clothing culture and etiquette.”

Her affection for hanfu grew through these activities and she began to study traditional Chinese culture in depth.

Since some hanfu styles are suitable for daily wear, she has been dressing in hanfu for a long time.

“I believe that making hanfu daily wear is a real embracement of it, instead of placing them on a pedestal,” she said.

She spends around 2,000 yuan a year on buying hanfu clothing.

“During the first few years that I became fond of hanfu, around 2010 to 2014, people often mistook what I wore as a Japanese kimono or Korean hanbok,” Xu said. “Every time I had to explain that it’s hanfu, our traditional clothes.

“But now I find more and more people understand what hanfu is and almost every pedestrian who saw my dress knows it’s hanfu. I feel very proud of it.”

She even took hanfu as her wedding dress. Her husband also wore hanfu to the ceremony, which follows traditional han people’s marriage customs. Hanfu culture gathers her and many friends with the same interest.

“The friendship that generates from the same interest is very pure and stable,” said Xu. “My friends and I also established a group for han dance. We learn han dance together and organize various cultural events during traditional festivals to promote han culture.”

However, she still worries that some costume dramas and online pictures don’t show the real hanfu.

Xu thinks these dramas, as one of the most effective promotion ways, don’t work well on telling people what hanfu is, and misleads them with fake hanfu. She also said some online stores sold fake hanfu.

She feels glad that the government supports the promotion of traditional Chinese culture and the Central Committee of the Communist Youth League organized the first Traditional Chinese Garment Day in April with the anime-streaming platform, bilibili.com and the hanfu circle. She hopes the festival can continue and gain more support from authorities. 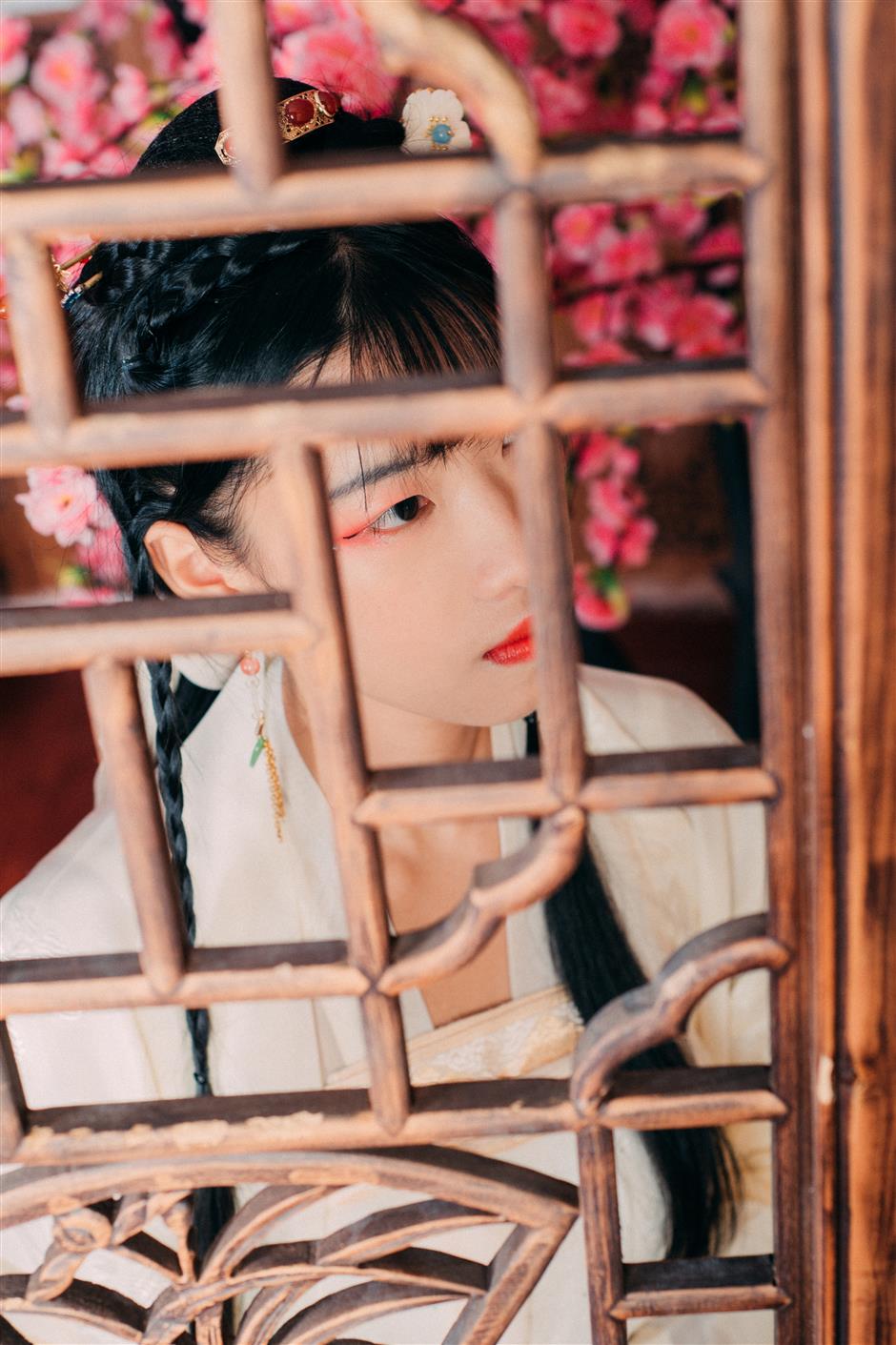 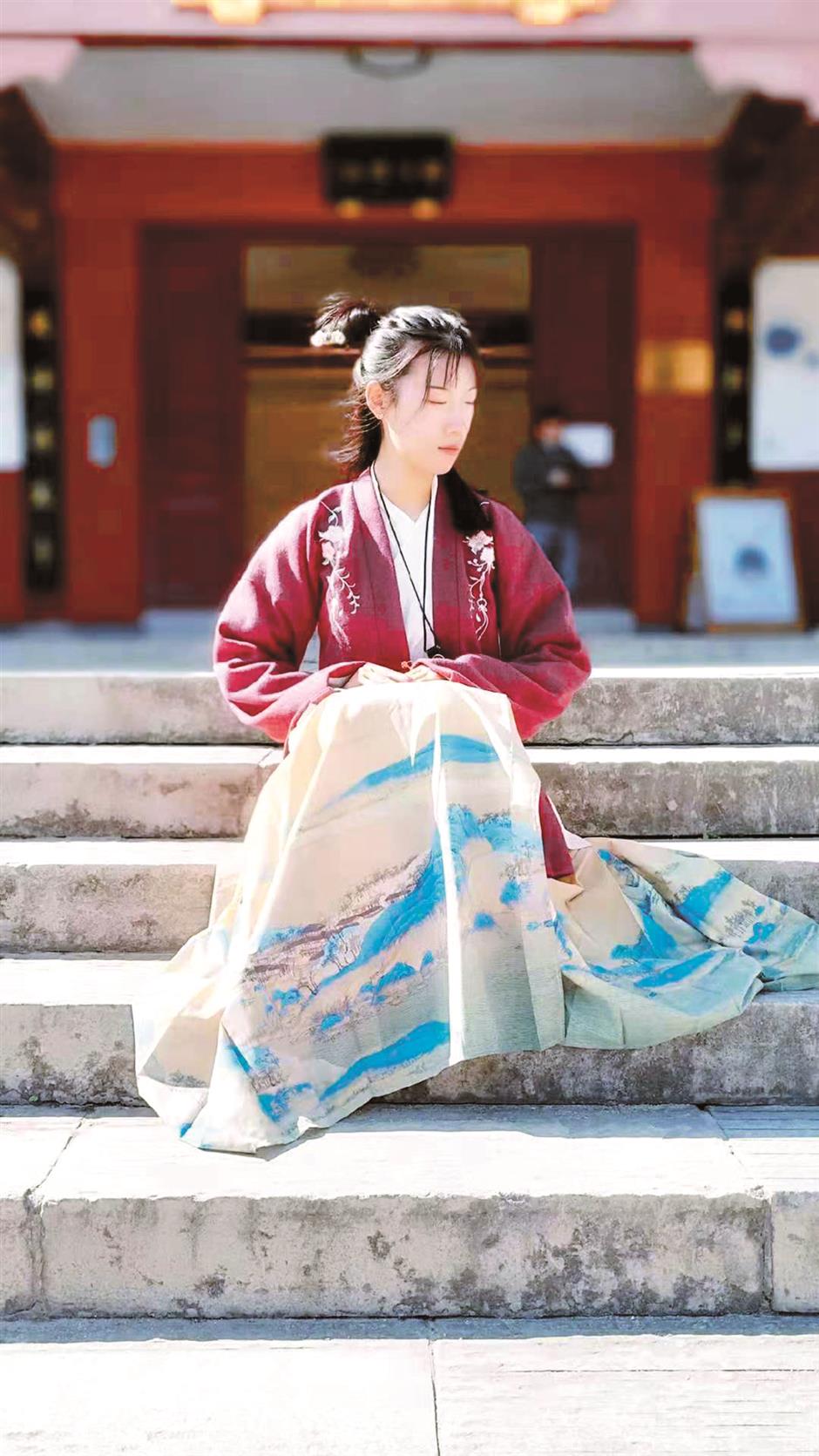 Zhou Yingxi, 20, from Fujian Province, started wearing hanfu in 2013 and made the ancient attire daily wear after she went to college.

“I began being attracted by hanfu when I saw some friends posting information about it on my WeChat and found these clothes very charming,” she said.

She jokes about being very poor so that she wears hanfu in daily life.

“Wearing hanfu makes me save money for many other clothes,” she says.

Her mother supports her interest and often asks her to wear the clothes and take pictures.

“During a recent tour to Ningbo (a city in Zhejiang Province), I wore a mix-and-match of beizi (a large, loose coat in hanfu) and jeans when riding on a bicycle and met two girls on an electric bicycle,” Zhou said. “I heard the girl on the back seat telling her friend on the phone that she saw a lady wearing hanfu and some other related things.

“When she looked back, she found I was looking at her and felt embarrassed. Then her friend riding the bicycle and I both smiled.”

The role played by hanfu is not only a bridge between those wearing hanfu and ordinary people but also a bond between hanfu dressers.

“I can always recall the first hanfu event I participated in,” said Zhou. “I went there alone and arrived at the scene earlier than scheduled with no one known to me.”

However, the organizer treated her like an old friend and guided her to a seat.

“When the activity started, there was no awkwardness nor strangeness and everything was very nice,” she said.

The tongpao, a name for hanfu lovers, that she knew two years ago are still close friends. She says it’s nice to see more and more people wearing hanfu and that there are some clubs emerging at her school.

“But sometimes I still encountered many people who mistook me for a performer,” Zhou said. “I hope one day I can play games or wear high-heeled shoes in hanfu and no one will bb (say blah blah blah) about it.”