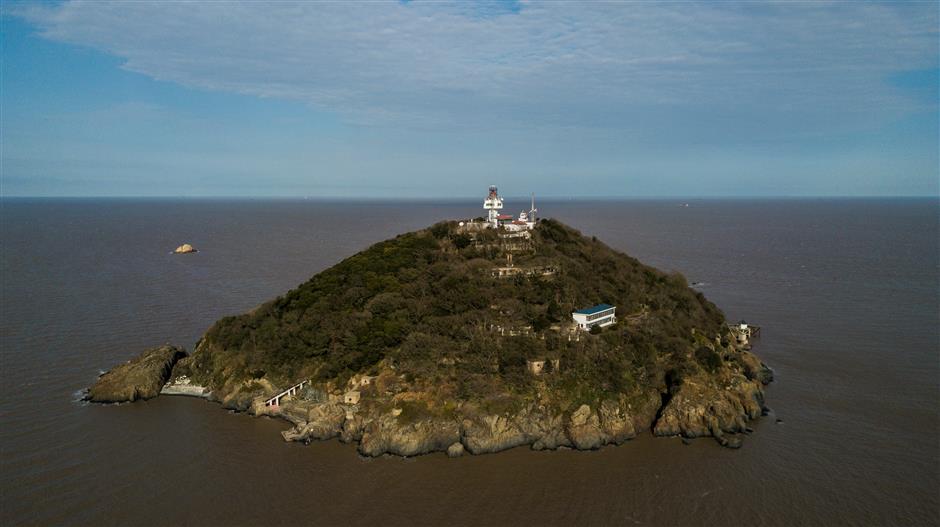 It’s a lonely job working in the East China Sea, some 30 kilometers offshore from Shanghai. But a crew of lighthouse keepers on a tiny island fills a crucial role in maritime navigation.

Their base is 0.09-square-kilometer Dajishan Island. Four keepers rotate shifts over two or four-week stints. Chi Caiming, 51, is the crew leader.

Chi, who became a lighthouse keeper in 1988, spent 210 days on the island last year. On January 25, he began a shift that will extend through the Chinese New Year holiday, which starts on Monday.

“I have lost count of the number of Spring Festivals I have spent on the island,” Chi tells a Shanghai Daily reporter who tagged along. “Plenty of them, I reckon.”

The lighthouse was built by the British in 1869 but later destroyed in war and rebuilt.

From the island marina to the lighthouse, Chi climbs 273 steps. He tells me there were once military troops with cannons stationed here. They all left in 1994, in the same year, Chi was assigned to work on Dajishan.

Their legacy is the narcissi that now bloom all over the tiny island.

Chi’s job is to make sure that all the equipment and power generators on the island are in working order. Since there is no electricity supply, operations rely on three diesel generators.

“The four of us take shifts to keep watch out around the clock,” Chi said. 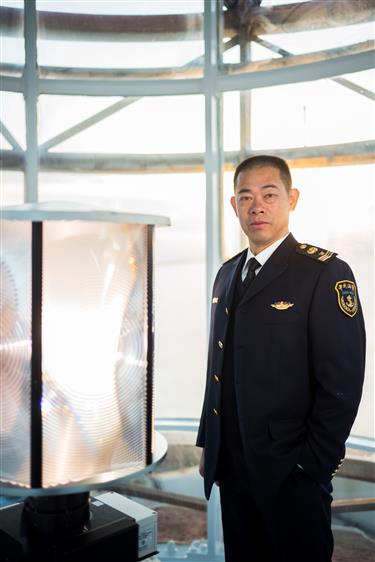 Chi Caiming, the 51-year-old keeper who has been watching the lighthouse for 25 years, stand beside the beacon. It will automatically switch on when the sun starts to settle.

When Chi first came to the island, the old generators in use often malfunctioned and he had to learn machine maintenance by himself.

In 2013, China’s first base station of the Differential BeiDou Navigation Satellite System was installed on the island. Chi then had to learn the computer skills necessary to monitor the BeiDou software.

Nowadays with the advent of modern technology, most equipment on the island is automated. Still, Chi goes to the machine room every couple of hours to check that everything is running smoothly. He notes it down in the work journal as “all good.”

Automation has heightened in the boredom factor, the true nemesis of the lighthouse keepers.

Chi recalls his first stay on another island in 1988. He was trapped there for 77 days with a colleague because of hostile weather. He said he cried with joy after returning home.

“In the end, we couldn’t even find anything to talk about with each other,” Chi says of the experience. “It felt like all the words on the world just slipped away from me.”

But Chi has persevered in the job. Before 2008, there was no cell phone signal or Internet access on the island. Chi had a 1,000-piece jigsaw puzzle in his room to fill the time, but he never finished it.

“I left some pieces out so that I knew there is something uncharted in my life,” Chi tells me.

Now with Wi-Fi access in the lighthouse dormitory, Chi no longer needs puzzles to while away the hours. He makes video calls back home every day. 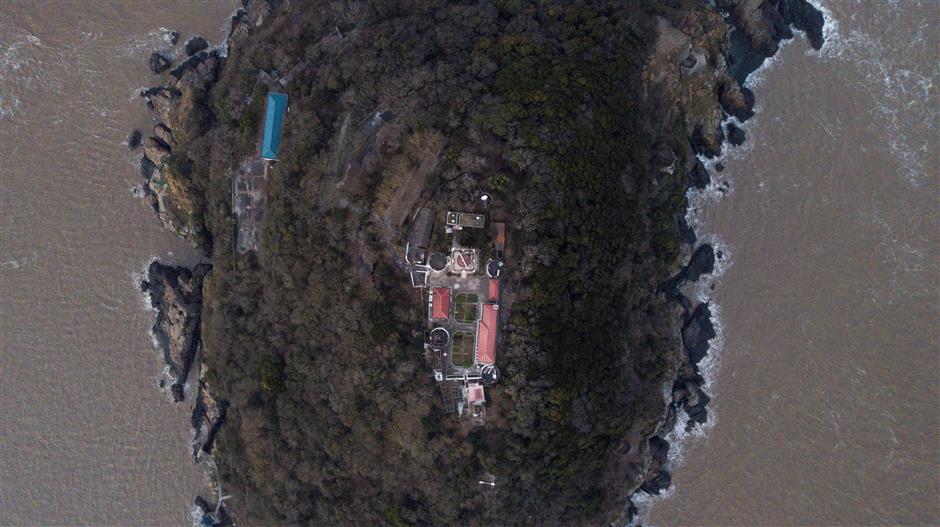 In their leisure time, Chi and his crew grow vegetables in the small yard outside and keep a few chickens. Rabbits and goats run wild around the island, brought by the lighthouse keepers.

“We don’t rely on them to feed us,” Chi explains. “They just spice up our lives here a bit.”

Most of the rabbits are eaten by sea eagles.

Chi jokes that if there is one thing on the island that would catch people’s attention, it’s the huge centipedes that appear every summer.

“There are everywhere,” says Chi. “Once a centipede got under my bed covers and bit me. It took more than a week for the swelling to diminish.”

The island is a bit warmer than Shanghai in the winter, while summers are hot and humid. Weather always occupies the thoughts of lighthouse keepers.

All typhoons impacting Shanghai first hit the island, creating concerns about food and water stocks. The island’s supply boat was once delayed so long that the crew’s food supplies were nearly depleted.

“We were down to just a little porridge every day,” Chi tells me.

In 2005, when Typhoon Matsa hit the island, Chi was awakened by a colleague at 5am because the transmitter antenna on the signal tower of the GPS system was torn off by a gale.

It was the only GPS base station in the Yangtze River estuary at the time. If the antenna couldn’t be fixed within 12 hours, the navigation system of boats in a 500-kilometer radius would be paralyzed.

The antenna sat atop the 25-meter-tall signal tower. Chi climbed up to the tower, braving Level 12 storm gales. It took all his strength to simply cling to the iron tower. Finally, he was forced to climb down.

He waited until the storm moderated in the afternoon and gave it one more shot.

“There has been little drama in the 25 years of my watch on the island,” Chi says. “But that storm was something I have never encountered before, nor ever encountered since.”

Eventually, Chi climbed back to the top of the tower, his eyes barely able to open, and fixed the antenna.

Chi can look back on such dangers now with laughter. He said people tend to assume that life on the island is hard, but he actually likes it.

The beacon in the lighthouse switches on automatically as night falls. Chi says most of the ships at sea are now equipped with electronic maps and GPS navigation systems, so the beacon is not really necessary anymore.

“But sailors still look for it in the night,” Chi says. “Seeing something shimmering in the dark is more comforting than dots displayed on a screen.”

For that, if nothing else, Chi says he will carry on. 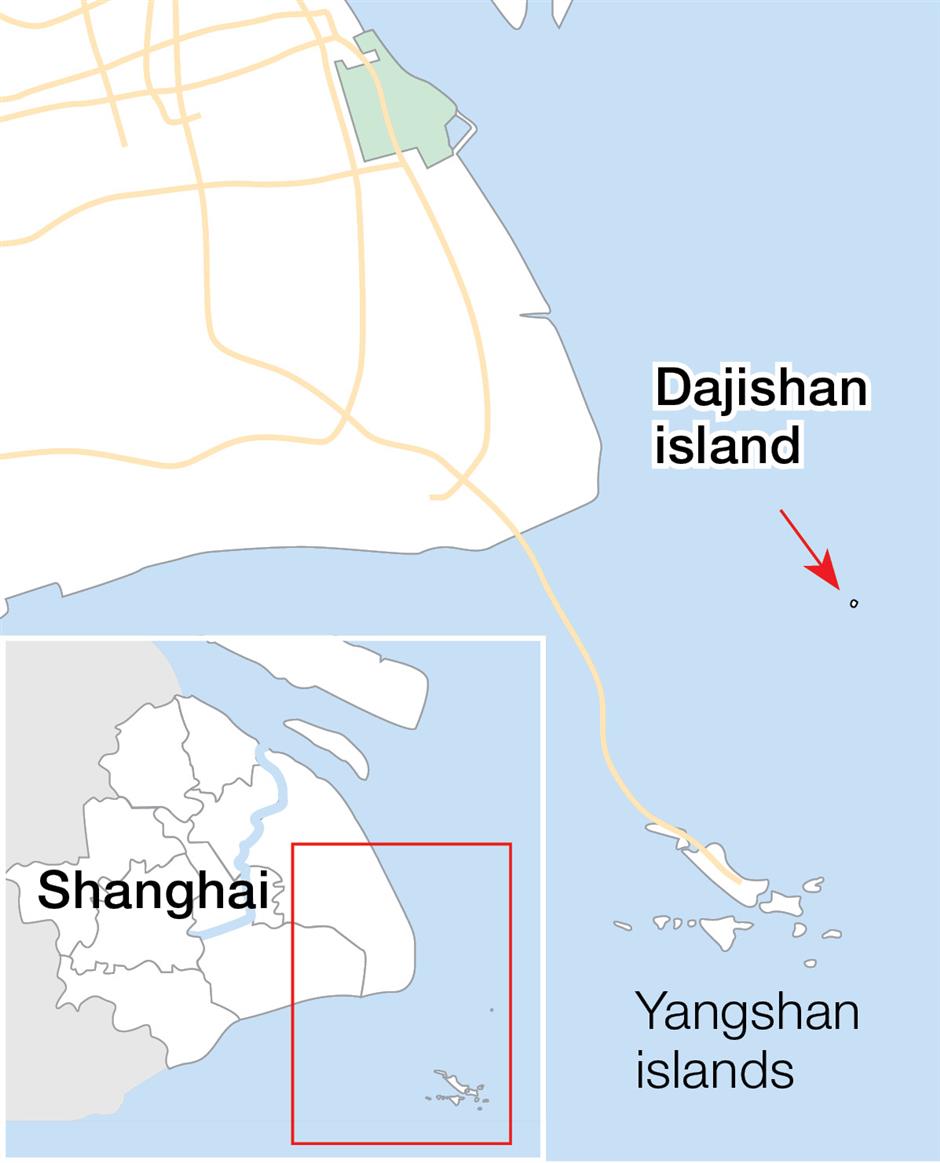 The location of Dajishan Island on the map