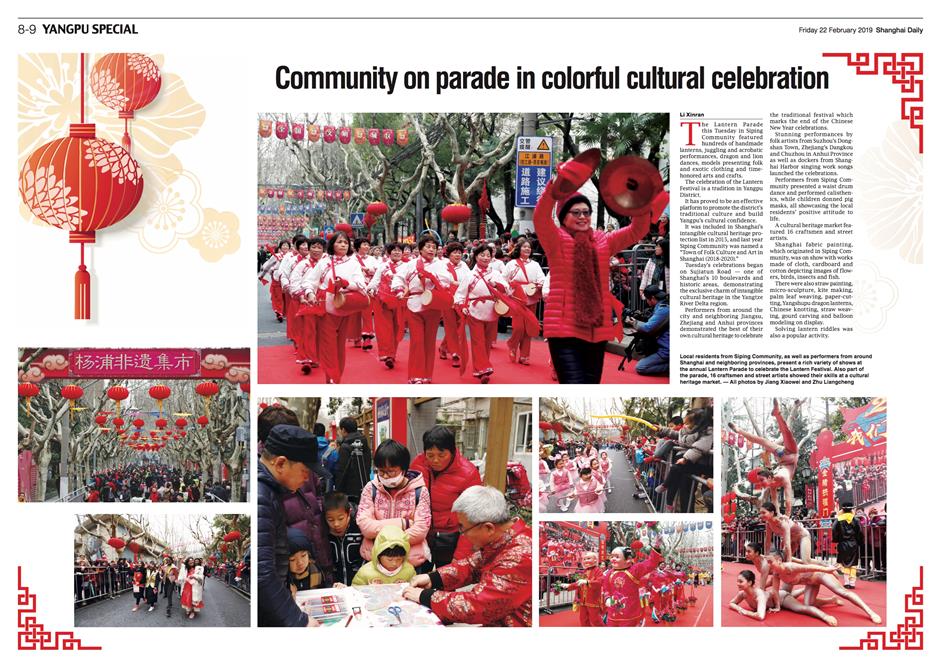 Local residents from the Siping Community as well as performers from around Shanghai and its neighboring provinces presented a rich variety of shows at the annual Lantern Parade on Tuesday to celebrate the Lantern Festival. Also part of the parade, 16 craftsmen and street artists showed their skills at a cultural heritage market.

The celebration of the Lantern Festival is a tradition in Yangpu District.

It has proved to be an effective platform to promote the district’s traditional culture and build Yangpu’s cultural confidence.

It was included in Shanghai’s intangible cultural heritage protection list in 2015, and last year Siping Community was named a “Town of Folk Culture and Art in Shanghai (2018-2020).”

Performers from around the city and neighboring Jiangsu, Zhejiang and Anhui provinces demonstrated the best of their own cultural heritage to celebrate the traditional festival which marks the end of the Chinese New Year celebrations.

Shanghai fabric painting, which originated in Siping Community, was on show with works made of cloth, cardboard and cotton depicting images of flowers, birds, insects and fish.

Special Reports
ADVERTISEMENT
61774
,
Guide for overseas Chinese students during COVID-19 pandemic
A cemetery that celebrates life and death
Nile threatened by waste, warming, dam
Enchanting abode in idyllic tranquility
Connecting nature, culture and people with design
Fancy footwork: An embroiderer finds her niche
How overseas Shanghainese go through outbreak
Counseling eases psychological toll of outbreak
'Support troops' guard the doors to the city
A guardian of the light ... and of hope for Wuhan
EXPLORE SHINE