A health clinic where patients bark for attention 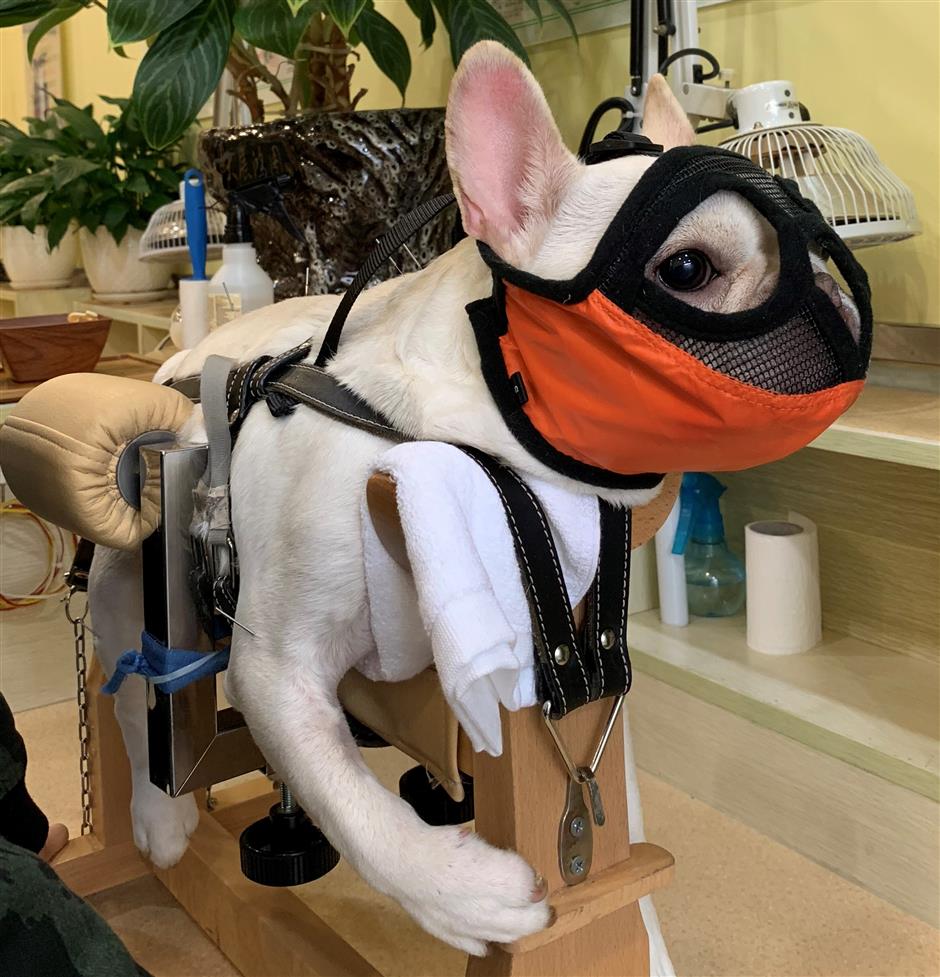 A French bulldog named Doubao is strapped into a wooden device ahead of an acupuncture treatment at an animal health center in Shanghai.

Although the dog’s name means “steamed bun with sweet bean paste stuffing,” Doubao doesn’t look particularly sweet at the moment. Wearing a muzzle, he barks and thrashes, trying to throw off his shackles.

“He is just terrified rather than in pain,” says Yang Xiaoyu, the dog’s owner. “He was blinded in an accident several months ago, and he doesn’t like being restrained. He is only 2 years old.”

Doubao is not at the center for treatment of his eyes. Rather, he is to undergo acupuncture for what is known as “wobbler syndrome,” or more precisely, cervical spondylopathy. It’s a condition, mostly found in larger dogs, that relates to abnormal development of bones in the neck that may compress the spinal cord.

“Acupuncture is helpful,” says Yang. “My dog’s condition has improved after four treatments. Previously, he was in such pain that he shook. That pain has been relieved.”

Chinese people for centuries have turned to acupuncture to relieve chronic pain. If it works for people, why not animals?

“Acupuncture is useful in the management of nervous system disorders,” says Jin Rishan, 56, founder of the Traditional Chinese Medicine Neurology & Acupuncture Animal Health Center. “Some dog breeds, like the French bulldog, toy poodle, Bichon Frise and dachshund, can suffer from congenital defects, like spinal disc herniation — a serious condition that can lead to paralysis.”

Both Jin and Yang agree that dog owners need to have a good understanding of dog breeds before raising them.

“The humid weather in Shanghai tends to cause skin diseases in French bulldogs,” Yang says. “Cervical spondylopathy is also frequent. I didn’t know that at the very beginning.” 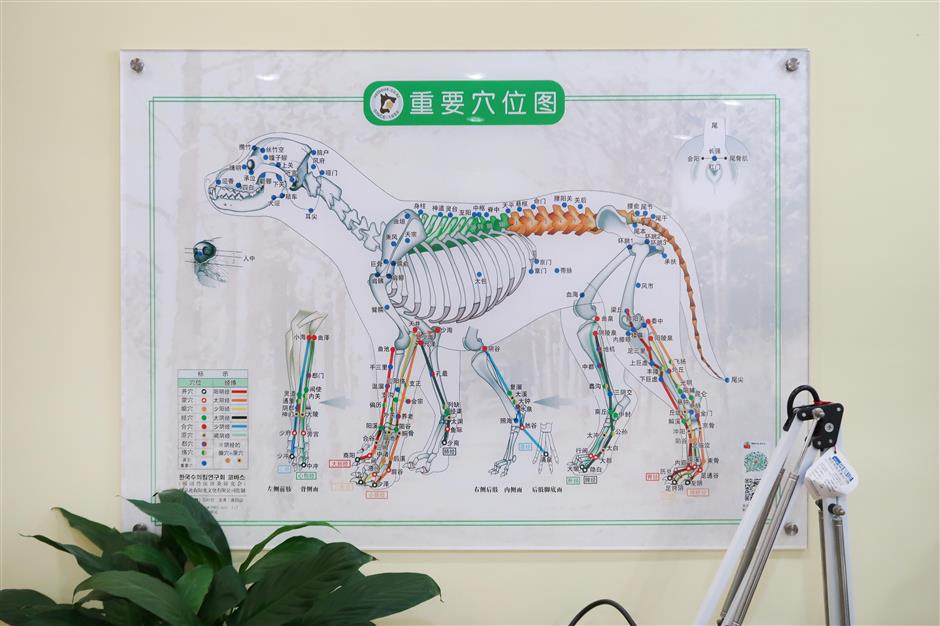 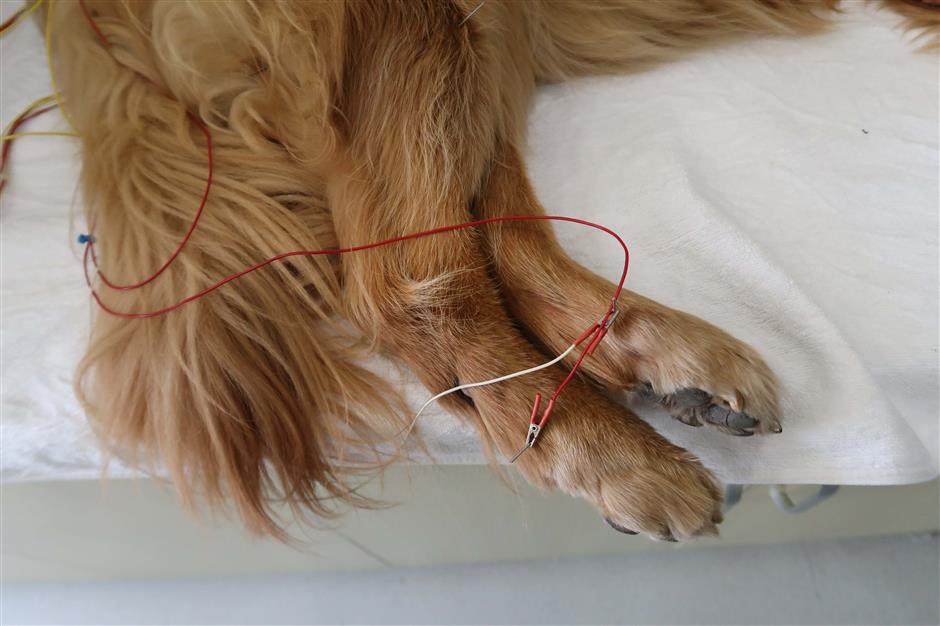 Acupuncture needles are attached to a device that generates electric pulses through clips.

According to Jin, the health center is the first pet hospital specializing in neurology and acupuncture in Shanghai, or perhaps even China. Many foreign veterinarians have come to Jin’s clinic to study his methods.

Although the clinic is on the second floor of a lonesome office building in Minhang District, it is nonetheless bustling with patients. At least 11 were treated while I am there one morning.

“The busiest season is coming in two months,” says Jin. “Then, I expect more than 25 patients a day.”

Bole, whose name was actually Sun Yang, was a renowned horse trainer. “Bo le” refers to the ability to spot potential talent.

Apart from dogs and cats, Jin also treats rabbits and even more exotic pets like the European polecat.

“Veterinarians generally follow the system of acupuncture points for the human body,” Jin tells me. “However, I think the systems are different, but that hasn’t been shown scientifically. My acupuncture treatment is based on the study of neurology. Traditional therapy gives hope to pets that can’t be cured by Western medical practices.”

Among the four-legged friends I encounter at the clinic are a toy poodle named Paopao. He seems the calmest of all. He appears to be quite used to the treatment, even enjoying it.

The needles used in the treatment are attached to a device that generates continuous electric pulses through many small clips. The electro-acupuncture allows all the needles to be stimulated simultaneously.

Jin tells me Paopao was first brought to the clinic four years ago. The 3-year-old dog was suffering from lumbar disc herniation and was partially paralyzed. The owner had been told by veterinarians in other clinics that the condition was incurable.

After a short period of treatment, the owner asked Jin to euthanize Paopao. He paid for the euthanasia and cremation, then left.

“I still held hope for Paopao,” says Jin. “I believed that he would get better. Therefore, I didn’t euthanize him but continued to treat him. He receives three to four treatments a week. He is just like my own pet.”

With the help of a wheelchair, Paopao moves quickly around what has become his new home.

“Paopao is the director of our inpatient department,” jokes Jin’s assistant, a 33-year-old surnamed Lu. 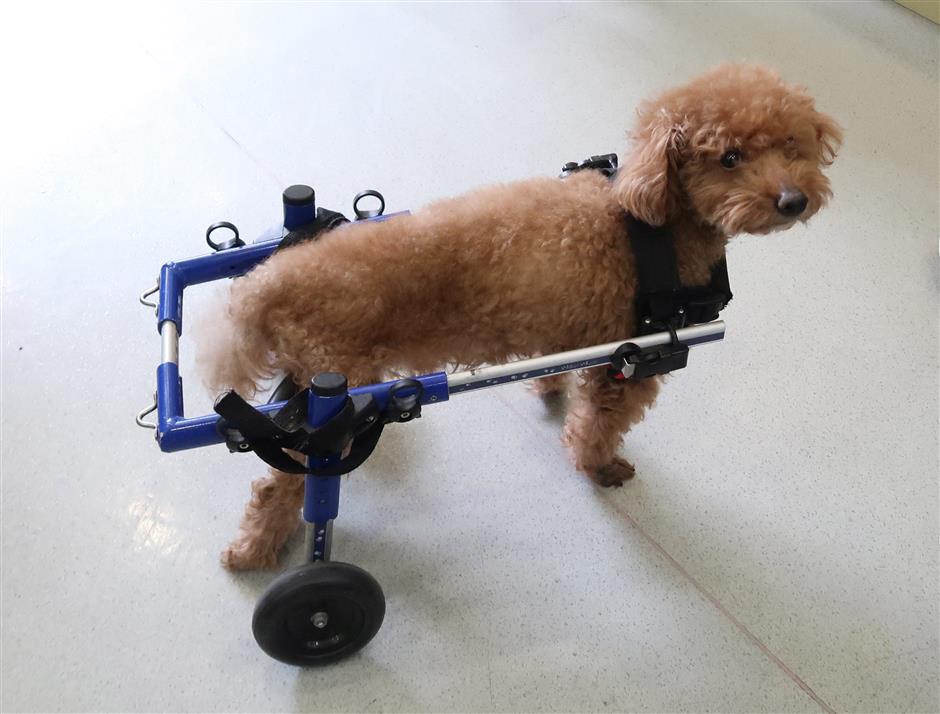 Paopao is known as “director of the inpatient department.”

Hospitals for pets, just like those for humans, are settings of both sadness and joy.

Owners bring their pets in, treating them like beloved family members.

One middle-aged owner told her 6-year-old mixed-breed Shih Tzu, “My lovely girl, put your hands on the pedal, just like riding a horse. Be good and quiet. Mummy and daddy will take you out to play after the treatment.”

The owner of a West Highland White Terrier, or Westie, from the Pudong New Area tells me she visits her “child” at the center and feeds the dog slices of sirloin steak.

“Instead of stewing, I steamed the meat, which retain more nutrition,” she says.

She tells other pet owners waiting at the clinic that she once had a shepherd dog for 16 years. In the last days of its life, she sent him to a pet nursing home in Shanghai.

Some dogs in Jin’s health center don’t have the luxury of doting owners. They are abandoned pets, who were brought to the clinic for treatment by kind strangers.

“I found this dog huddled up in the parterre of People’s Park on New Year’s Day,” says Lin Lizhi, who hails from Singapore. “My little daughter said, ‘Daddy, dog, cold.’ Actually, I am not a dog lover, and my family didn’t want me to bring the dog home. However, after some hesitation, I decided to rescue the dog, which I have named Jerry.”

Jerry is a toy poodle. When he was found, he couldn’t stand or walk and weighed only 1.7 kilograms. His age is estimated at about 5. Lin says he brought him to the clinic hoping that acupuncture might help the dog regain strength.

Lin said he has been paying for care of the dog, but costs are mounting and he has appealed for funding help on WeChat. His goal is 8,940 yuan (US$1,334).

Lin said he is hoping the dog is healed soon and can be given over to a caring family for adoption.

It’s hard to be at the clinic and not begin to view each animal as a person in need of help. 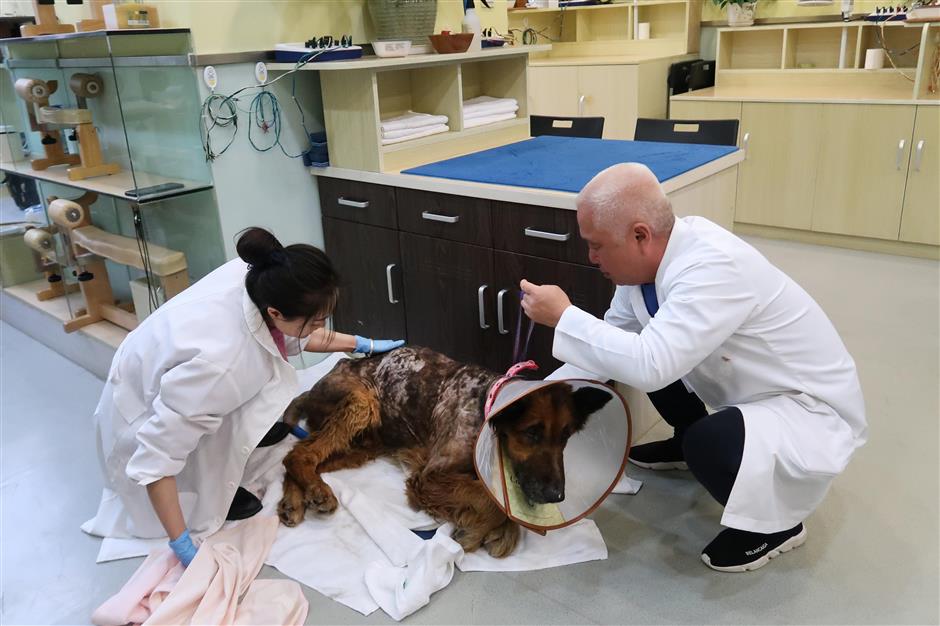 Jin Rishan and his assistant tend to a German shepherd abandoned in a ditch.

The night before my second visit to the clinic, Jin received an abandoned German shepherd sent by an animal rescue organization in Anhui Province. The dog, whose hind legs were paralyzed, was found in a drainage ditch.

After his fur was shaved, the nameless big guy was nothing but skin and bone. Only his large paws revealed his past vigor.

Hearing the dog’s story, the owner of a 16-year-old golden retriever named Google says she wants to donate money for the canine’s care.

“How about the name Lucky for him?” says the woman, who identifies herself as Ma Ying, 53, from Shanxi Province. “The German shepherd has survived a catastrophe and is bound to have good fortune later on.”

Ma flew from the Shanxi city of Taiyuan to Shanghai to have her dog Xiaoguai receive acupuncture. He is suffering from canine distemper, which attacks the nervous system. The treatment is expected to last a month, and Ma says she will stay for the duration.

Her love of animals seems to know no bounds.

“I raised a hen named Lucky,” she chatters on. “I called it that because the hen was very fortunate. It escaped from the trunk of a car ahead of mine. I stopped my car and shooed the bird off the roadway. The driver of the truck told me the hen was bought to feed his wife during her period of confinement. So I paid him 50 yuan for the bird and saved it from the dinner table.”

Stray animals from outside Shanghai are not infrequent at Jin’s clinic. Xiaobai, aged 2, was hit by a car on an expressway in Harbin and was rescued by another car owner. Luomen from Singapore was found in the grass after a car accident. Supported by local pet lovers, the dog was sent to Jin’s clinic.

“I don’t own a pet because I don’t have time to take care of one,” Jin says. “As a veterinarian, I see pets suffering every day. I know the heavy responsibilities of pet ownership.”

In his off-time, Jin said he spends a lot of time studying.

“I can read a professional book four times but still have things I can’t understand,” he says modestly. “I am not an expert. I am only a doctor focused on treating patients." 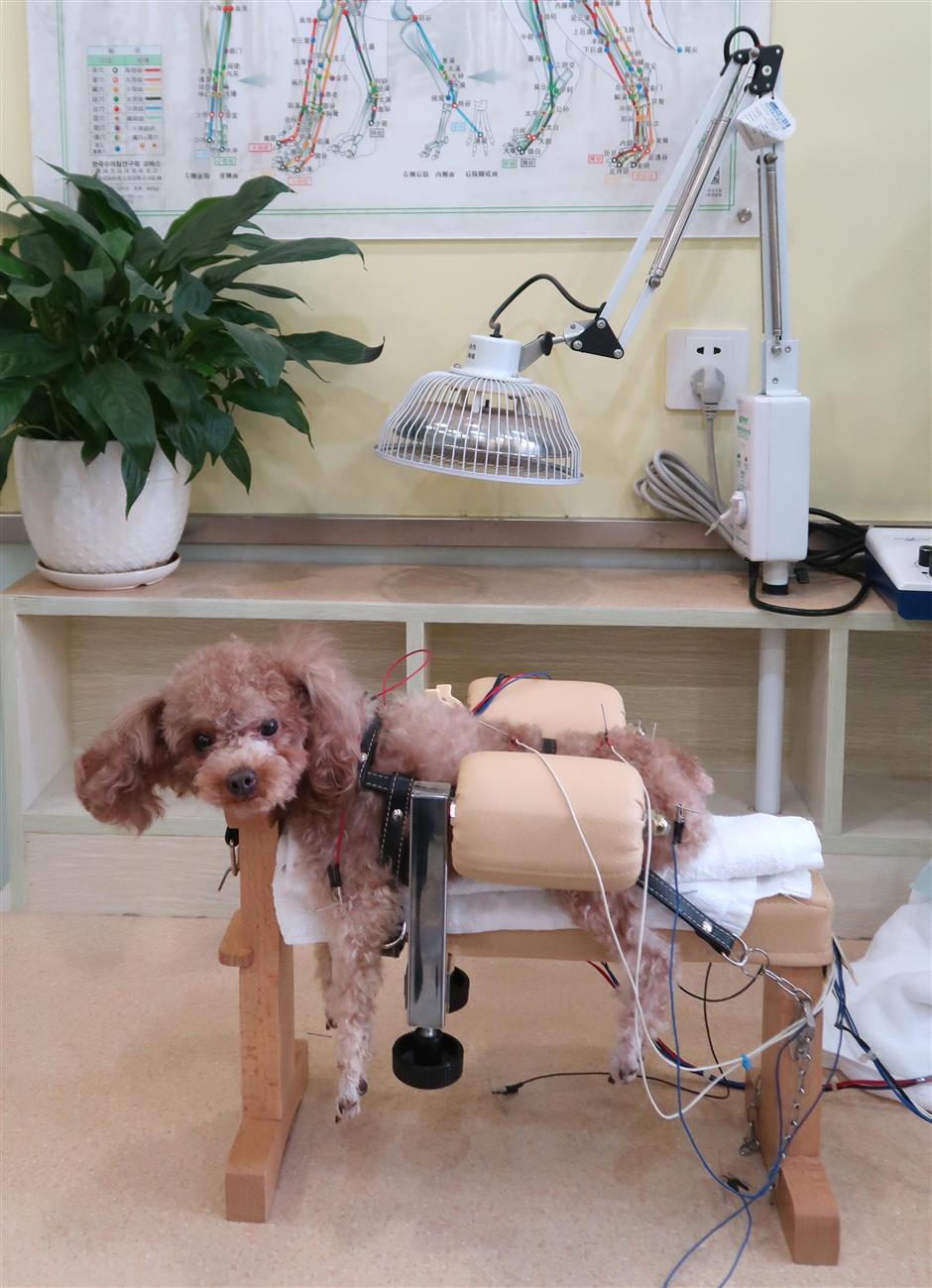 Jerry needs a home now. Contact Calvin Lin via WeChat (ID: garliclim) if you want to adopt this cute dog.