For Hong Kong native Carl Gouw, a home can be any size and located anywhere, but its authenticity and history should be preserved and passed on.

His house located in Jadine’s Lookout, Hong Kong, is 42 years old, same age as him.

“Our city has gone through some rapid changes in urbanization over the past decades. During my childhood, I witnessed many buildings and monuments being demolished into a complex, and roads that were developed into new neighborhoods. Many areas and boundaries became blurred as a result of these changes,” the serial entrepreneur and property developer said.

“Together with architect and interior designer Roger Hackworth, we put a lot of thought on both aesthetics and practicalities. We had a clear but concise vision for the house, but still wanted to preserve elements from past renovations to retain the originality and spirit of the family residence, as this is where my sisters and I grew up while my grandmother lived with us,” he added.

Facade, layouts, landscape and interiors were the biggest changes, but the style of European formality and certain proportions were preserved. 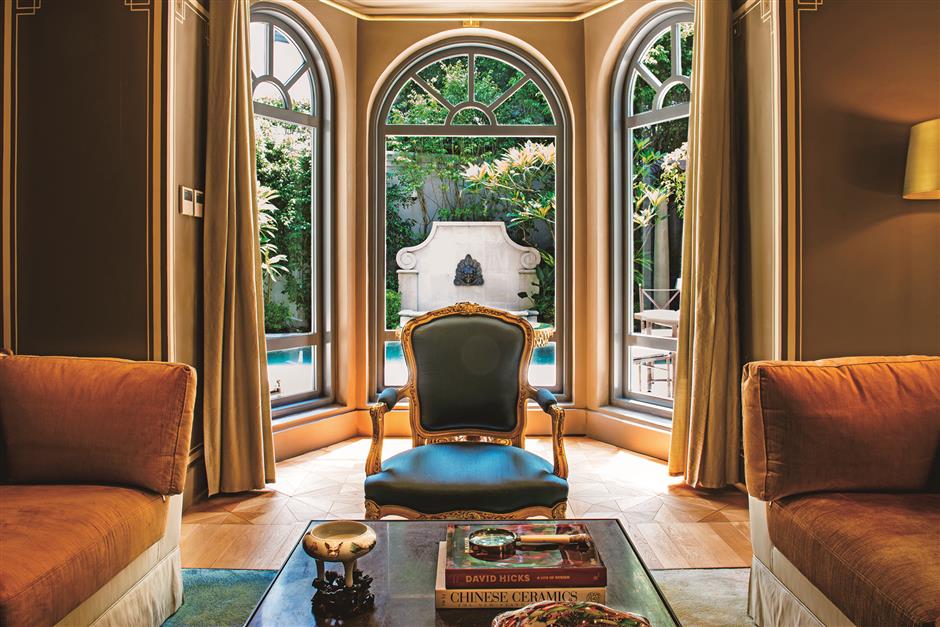 Upstairs in the formal living room, two custom-made sofas face each other over a metal and marble coffee table. The 19th-century gold gilt-framed French chairs were purchased at an auction.

Built in 1975, the house was purchased by Gouw’s parents. It’s a 500-square-meter four-story space located in Jardine’s Lookout — a mountain in Hong Kong named after the British trading empire. The region is now a residential area where some of Hong Kong’s most valuable houses and apartment buildings are located.

On the practical side, the new design had to accommodate the needs of three generations, since his parents and daughter also reside here.

Gouw had a passion for real estate and hospitality since his earliest memories and started his first project when he was 18. He founded the ACTS Group in 2005, a property developer and construction enterprise. His wealth of insight and tenure in property and hospitality ventures sparked the idea for Canvas, a recently launched new lifestyle brand that is aimed to connect and nurture people, ideas, experiences and places through a membership program, hotels and residential developments. In 2014, he was included in Perspective magazine’s prestigious “40 under 40” list.

Meanwhile, he wanted to create his own ideal living space.

“We wanted to have the grandeur but not in a similar manner to how commercial spaces define luxury. The style of our home evokes a sense of grandness and elegance from ancient European times, but the details are well-proportioned and reinterpreted in a way that fits the scale and functions of everyday living,” he said. 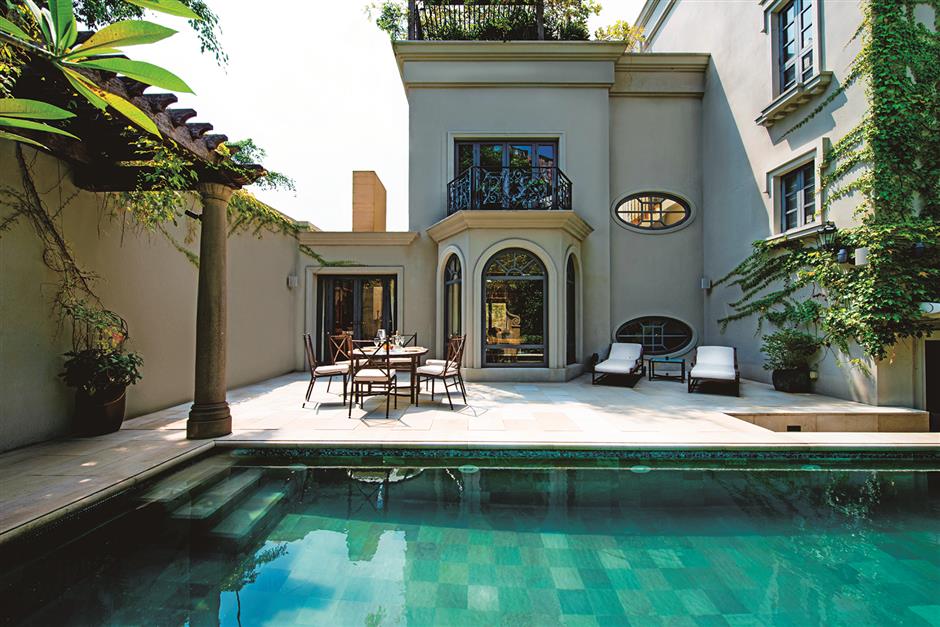 The outdoor pool resembles an oasis in Hong Kong.

He worked closely with Hackworth to create classical grandeur with ancient and historic features. This is achieved using wrought-iron gates and balustrades, semi-precious stone floors, bronze fixtures and antique furniture.

Gouw prefers precious objects of the past, but it is important that they fit within a space harmoniously and in a modern-day context.

“To me, the interior architecture should be toned down and avoid heavy moldings and ceilings with chandeliers that we often see in commercial projects around Asia,” Gouw said. “We have progressive formalities for some of the rooms, including one living room that is more subtle and contemporary. The foyer, lined with Pietre Dure precious stone flooring; dining room featuring a courtyard with a fountain and koi pond; and the formal living room installed with a real burning fireplace and chimney give the house its identity.” 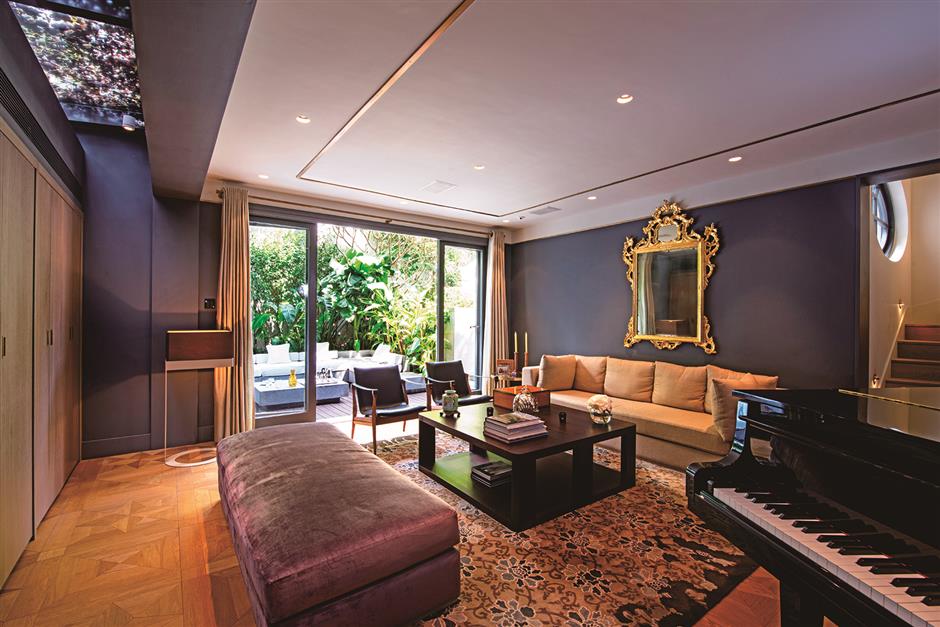 However, finer and subtle details, like the bronze and mirrored ceilings, custom-patterned carpets and colorful painted walls express the home’s inner character.

Antique furniture is well placed as accent pieces for the home. These unique objects complement the mix of timber and metal tables, and the versatile soft furnishings they have curated for the home.

Some of the pieces are dear to the homeowner’s heart. A suite of candelabra placed on the dining table was previously owned by the Duchess of Sutherland at Dunrobin Castle. They were purchased in the 1990s in Pimlico, London, when the area still had many antique dealers with museum-quality pieces.

“We also have a privately commissioned full-height cabinet from Linley in 2011. I used to buy a lot of desktop accessories in the 1990s from their original shop in London, when they used to make cigar humidors for Dunhill.”

Q: What’s the best thing about living in Hong Kong?

A: Beautiful natural landscape and one of the world’s best skylines.

A: Timeless, layered and comfortable.

Q: What’s the first thing you do when you get home?

A: Adjust the lighting and temperature in my home.

Q: How do you unwind?

A: Relax in our private garden or enjoy a bath.

Q: Where do you spend most of the time at home?

A: In my bedroom.

Q: What’s the view outside your window?

A: Difficult to pick a single object.

Q: Where do you source furniture?

A: From antique dealers in Europe.

Special Reports
ADVERTISEMENT
61762
,
Guide for overseas Chinese students during COVID-19 pandemic
A cemetery that celebrates life and death
Nile threatened by waste, warming, dam
Enchanting abode in idyllic tranquility
Connecting nature, culture and people with design
Fancy footwork: An embroiderer finds her niche
How overseas Shanghainese go through outbreak
Counseling eases psychological toll of outbreak
'Support troops' guard the doors to the city
A guardian of the light ... and of hope for Wuhan
EXPLORE SHINE