Winnie Hsu brews up a storm in the beer world 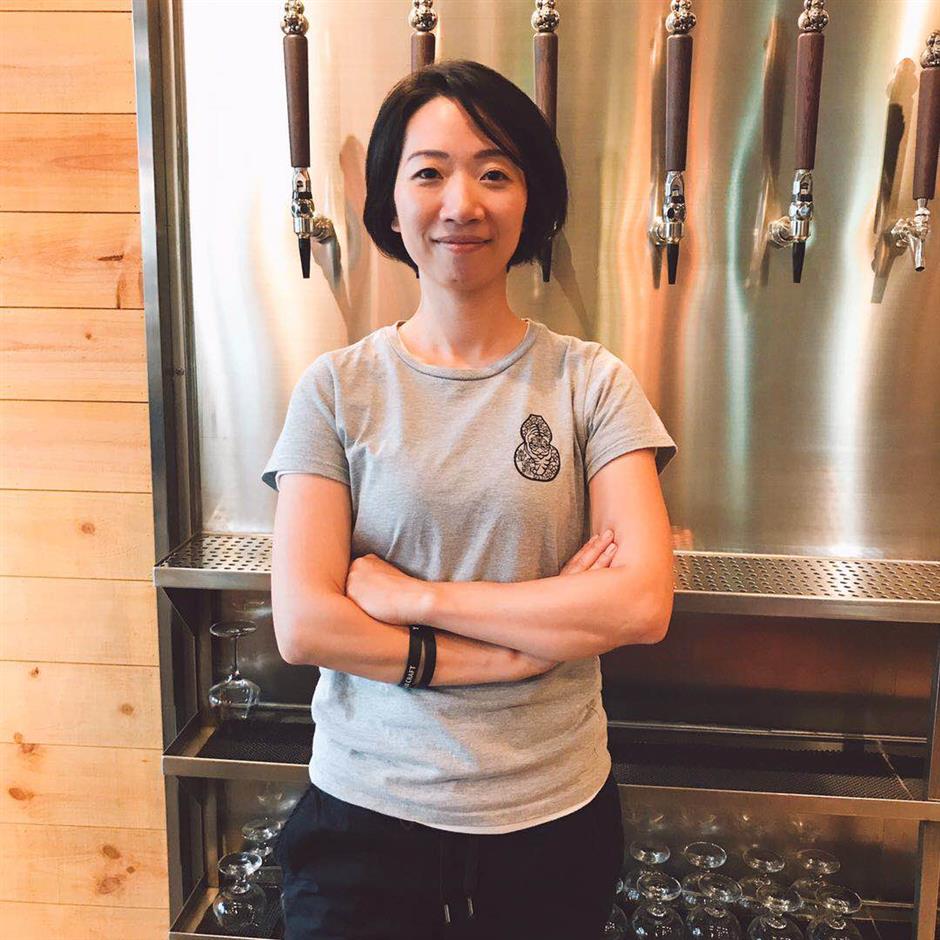 Despite being a minority in the world of brewers, some women are already becoming the crown jewels of the industry.

Winnie Hsu, award-winning brewmaster at Taiwan-based Taihu Craft Brewery, is one of them. Having brewed beer for 12 years, she shares a front-row seat with many male colleagues to the fast rise of the craft beer industry in East Asia.

But unlike many brewers who started out as beer aficionados, Hsu seldom drank beer before she made a career out of it.

Back in college, she interned for a Taiwan catering company as a bartender. When the company secured a franchise to run an American restaurant in Taiwan, her experience made her a candidate for the job of in-house brewer.

“All I knew about beer then were brands like Heineken, Carlsberg and Taiwan Beer, and they tasted roughly the same,” said Hsu. “I was not the least interested.”

These industrial lagers had reigned supreme in the global beer market, but their domination was steadily being eroded in the 1980s in the United States when a number of small, independent breweries tried to brew beer that was stronger in flavor, heralding what was to be referred to as the “craft beer revolution.”

In the mid-2000s, word began to spread of the revolution, and increasingly discerning consumers began to expect more from their drinks. It wasn’t long before shipments of Belgian artisan beer and American reinventions of legendary beer styles like IPA (India pale ale) arrived in Taiwan.

Hsu was part of the first wave of people introduced to craft beer, and she was sent to the US in 2007 to learn to become a brewer.

She took an apprenticeship at a brewery in Atlanta, Georgia, but was initially given the cold shoulder as her American supervisor resented the idea of having to take on someone with no training, not to mention a woman — a rarity in a male-dominated world.

“I was challenged all the time, people even advised me to quit,” Hsu recalled her three-month apprenticeship.

Looking back, she said the journey was filled with hardship. Her daily routine was to arrive at 6am and be drilled intensely throughout the day.

Brewing might appear to be fun, but in fact, the process is tedious. About 80 percent of it is cleaning. Most of her time was spent rinsing the fermentation tanks to ensure hygiene. “If bacteria gets in and colonizes the beer, the end-product you’ll get is awful,” Hsu said.

It also turned out to be back-breaking work. Standing about 160 centimeters tall, she had to carry eight to 10 sacks of malt, each weighing 25 kilograms, across the factory floor, lift them up and empty the content into the malting tanks — enough to wear her out after a day’s work.

She normally worked eight hours a day, from 6am to 2pm. Once she was so tired she turned on the wrong valve, causing the malt extract to go down the drain. Her supervisor gasped and salvaged what was left of the prized liquid. He asked tauntingly if she needed to go back to bed.

“With shadows around my eyes, I resolved to never be scolded like that again,” she said. “But he was right about the part of staying focused: Brewing entails concentration.”

Another habit she got into while undergoing training at the Atlanta brewery was to rush to the taps after work, and order a flight of beers to see if they were up to scratch or had an unpleasant off-flavor. “Because of that, I was drink-driving almost every day,” she laughed.

Recounting that experience was a trip down the memory lane for this 30-something woman, who majored in entomology in college and described the decision to leave for America as one that changed the course of her life.

While America for her used to be associated unflatteringly with physical labor, stern reprimands, drink-driving and sleep deprivation, she became emotionally attached to the brewery where she worked. When word came in 2017 that it was about to close, she booked the next available flight to Atlanta just to see it for the last time.

After the sojourn in Atlanta, where she acquired the skills for brewing certain kinds of beer, she relocated to Phoenix, Arizona and trained to become familiar with the basics of managing a brewery, such as quality and cost control. 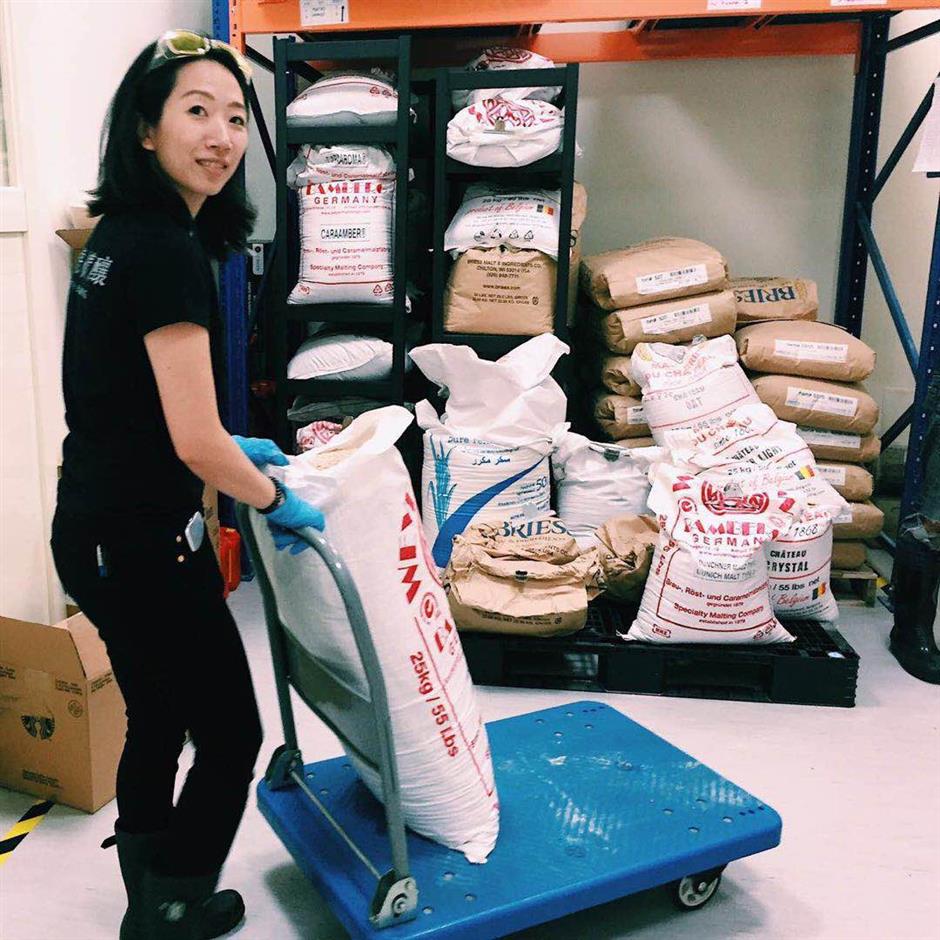 Winnie Hsu loads a sack of malt on a pushcart. Part of her training at the Atlanta brewery was to carry eight to 10 sacks every day, each weighing some 25 kilograms.

On her return to Taiwan Island, she had a chance to put what she learned into practice. Much of her work was scripted, in the sense that she was merely reproducing beers according to recipes, with little room for improvisation. Over time, this proved dispiriting as craft beer essentially stands for innovation and versatility.

She left to join Sunmai, a fledgling Taiwanese craft brewery where the owners gave her the autonomy to test her creativity, but up to a point. After her inventive brews such as honey-flavored beer garnered positive customer feedback not just in Taiwan, but in Shanghai and Suzhou, where Sunmai has restaurants, she was again looking elsewhere to push the envelope in her beer adventure.

It was at Taihu that her spark of genius really caught fire. Founded in 2013, Taihu first engaged in importing quality beer from Japan and the US. Hsu met its founders in a Taihu taproom in Taipei, and was instantly mesmerized by the ambience.

The taproom had no chairs; everyone stood to enjoy their drinks; the owners even served beer on tap in person. “I was a bit shaken, and I decided to join,” Hsu said.

What followed was a story of how genius, catalyzed by a combination of capital, vision and skilful management, can brew up a recipe for spectacular success. Taihu’s owners made clear very early on their ambition to make beers that taste different from mainstream pilsners flooding the market. The company spared no expense on German brewing equipment, land and a world-class water filtration system. In contrast, Hsu was more cautious, starting smaller with what she called a “pilot project,” a microbrewery with an output of 1 ton of beer per batch.

The trend then was to add local foods, especially fruits, into the beer to give it an extra flavor. Taiwan is a tropical island rich in fruit varieties, thus an ideal place to start her experiments. Her first major work was a Kolsch blended with kumquat, a fruit widely used in local beverages. Kolsch is a light-bodied beer speciality originating in Cologne, Germany.

She froze the fruit at a temperature of minus 80 degrees Celsius, effectively killing the bacteria that would have ruined the beer. In addition to sterilizing the kumquat, the beer itself was also important. Hsu’s knowledge of quality control at this point came in handy. She stuck closely to the authoritative BJCP (Beer Judge Certificate Program) standards on beer styles and adjusted her recipes accordingly.

While it is relatively easy to brew 30 liters of beer at home, brewing 3,000 liters isn’t a matter of multiplying the figure by 100. The difficulty of switching from homebrewing to commercial brewing lies in the thorny task of ensuring consistency in taste and quality, said Hsu.

She added that “the beer that forms the basis must be good enough, otherwise, no matter what quality ingredients you use, the beer will fail.”

Her kumquat Kolsch won her many awards at international beer competitions.

Hsu said she had created over 100 products since she joined Taihu, many of them involving “crazy” additions besides the four main ingredients — water, malt, yeast and hop — like pineapple pancake, a Taiwanese pastry.

The label of female brewer doesn’t seem to bother her, although her gender did make her the center of attention at whichever beer conference or competition she attended.

This has begun to change over the years, as more young women are following in her footsteps. For example, more than half of the brewers at Taihu are now female, she said.

The advanced level of automation today should take some credit. For breweries that produce 5 or 6 tons a batch, much of the operation has been mechanized, with machines doing most of the lifting and carrying.

“It’s the point where women are likely to be more widely represented in this industry,” she said.

Taihu now owns two breweries in Taiwan. The smaller one serves as the training center and research lab.

The other is capable of churning out 6,000 tons of beer a year, and has a separate canning line. This amount may seem huge, but compared to the general beer market on both sides of the Taiwan Strait, craft beer represents less than 1 percent of the total revenue, and although it is one of the fastest-growing categories, it is still considered a niche product. 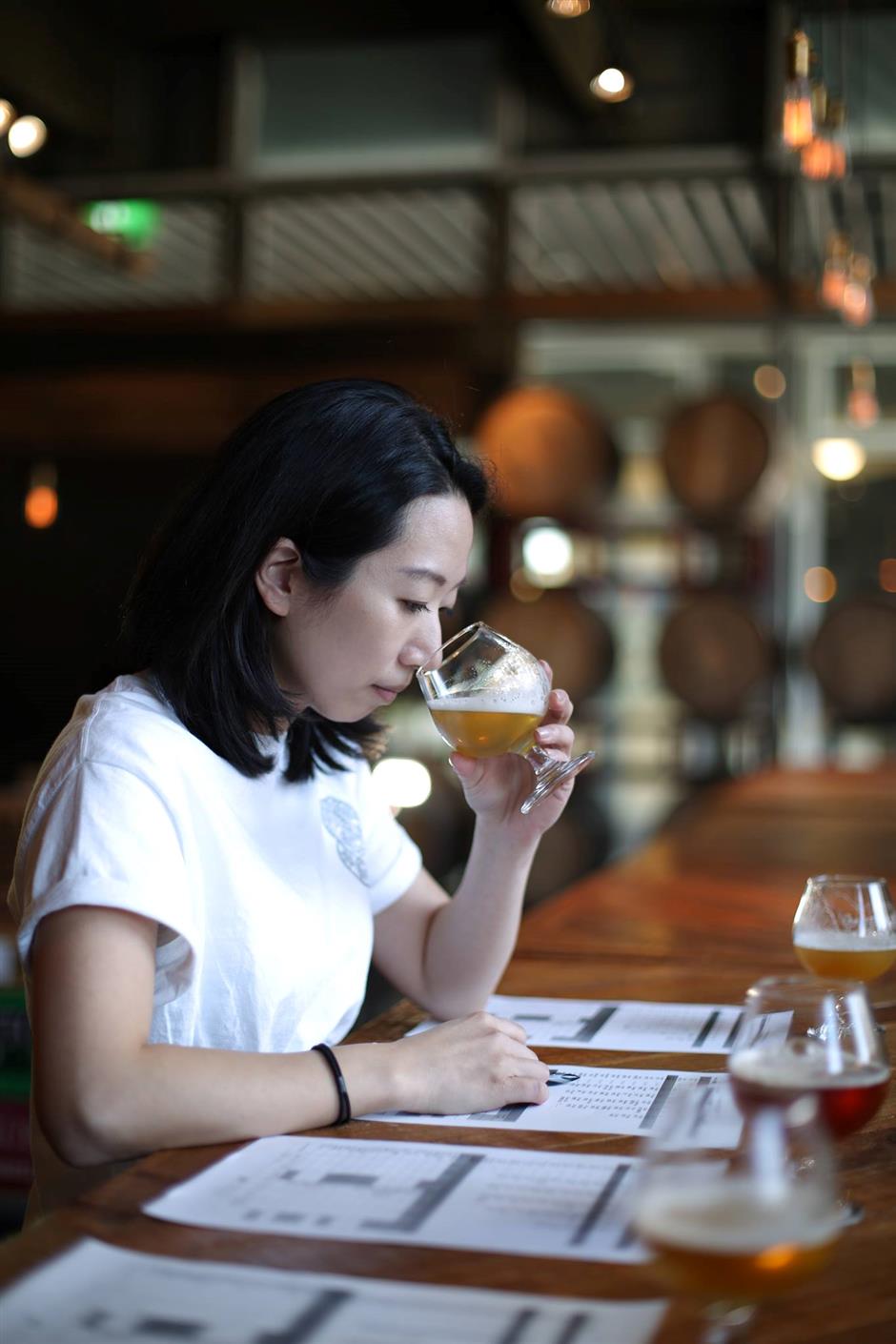 Winnie Hsu samples a beer from a tasting flight she brewed and makes notes regarding the aroma and flavor.

Competition, however, is building. Hsu shrugged off the idea of beating rivals, saying that rather than be at each other’s throats, all players needed to think about how to bring their market share up to 25 percent, a feat that American craft beer pioneers have pulled off over the past three decades.

Her career has had many high moments, and the one she appears to relish the most is when Starbucks began distributing customized Taihu beers in its iconic roastery.

When the Seattle-headquartered coffee chain opened the world’s largest roastery in Shanghai in 2017, Hsu remembered seeing a beaming Howard Schultz, ex-chairman and chief executive of Starbucks, raising a pint of beer she brewed in front of the camera crew.

It is one of the six beers Taihu supplied to Starbucks’ Shanghai roastery, three on tap and three in cans.

They were so sought-after that three months’ worth of inventory sold out in two weeks. Fresh supplies had to be flown in. Struggling to meet demand, Hsu said she felt “crushed,” like the ground beans that went into her beer.

Of course, she was visibly proud as she reflected on the collaboration with Starbucks, all the more so given the fact that Seattle is home to a dozen American craft breweries and Starbucks defied expectations by partnering with a young, obscure Taiwan brewery.

“I want to see how I can leverage the Starbucks brand to promote Taihu beers on the world stage,” she said.