Dumplings so yummy they spawn copycats

Imitation is said to be the sincerest form of flattery, but try telling that to Zheng Yuxia.

When asked about her famous steamed dumpling business, her reply is apparently more frustrated than happy. “No, I don’t want to talk about it anymore!”

It’s surprising perhaps because selling dumplings called shaomai has been a very lucrative business. The century-old family business, called Xiasha Shaomai, started with one outlet in a small town in Pudong and expanded elsewhere in Shanghai.

Her shaomai are so good that they have been listed as an intangible cultural heritage in Pudong, and she has had the honor of being named an “inheritor” of the old tradition.

“Search online and that you can find nearly 60 Xiasha Shaomai franchises in Shanghai, but most of them are fake,” Zheng says. “Xiasha Shaomai is a registered trademark, but it still doesn’t stop counterfeit eateries mushrooming up. I don’t like it at all, but I don’t know what to do about it.”

Different from the common shaomai with glutinous rice stuffing that originated in the Yangtze Delta region, her dumplings use fresh pork and spring bamboo shoots. That’s why they have become an exclusively springtime delicacy. 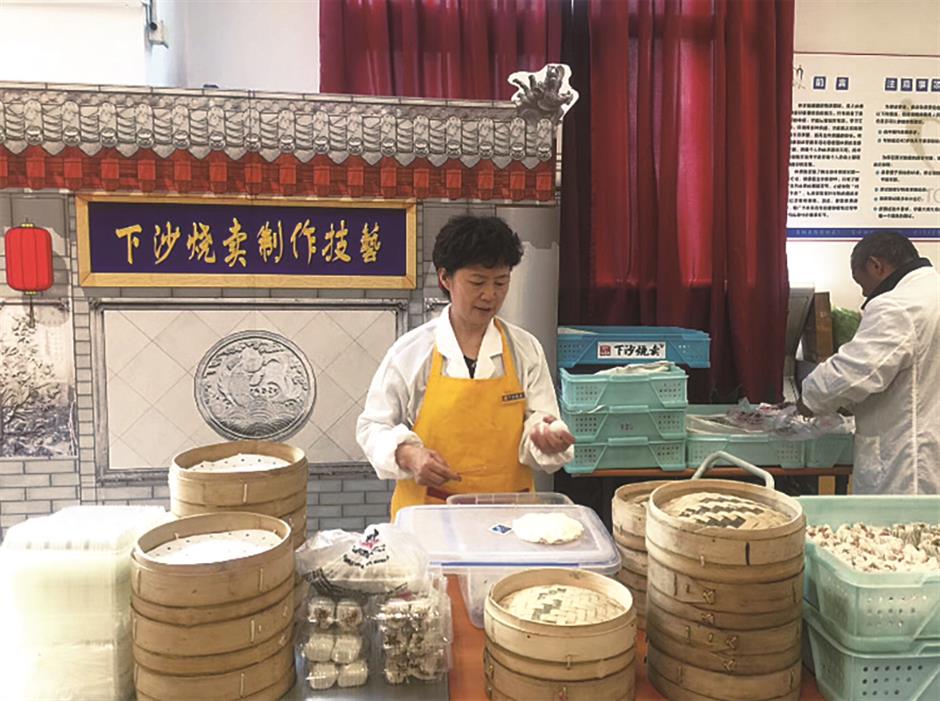 Zheng Yuxia makes Xiasha shaomai, an intangible cultural heritage in Pudong. Zheng has had the honor of being named an “inheritor” of the old tradition.

Zheng has developed stuffing using winter-bamboo shoots so that people can enjoy the dumplings in other seasons, but that’s another story.

Her shaomai taste like a high-end version of xiaolongbao, the traditional Shanghai mini-steamed buns. The pork skin jelly in the stuffing melts into the meat juice during steaming, and the flavor of the bamboo shoots seeps into the juice, making the dumplings even more succulent.

According to local historical records, the original shaomai can be traced back about 400 years ago, when local people made the snack along roadways to give to passing soldiers fighting against Japanese pirates.

About a century later, shaomai became really popular in the Xiasha area of the former Nanhui District, which is now part of the Pudong New Area. However, it was only around 2010 that the dumplings’ reputation spread beyond the town.

Zheng has managed to promote and sell Xiasha shaomai to the rest of Shanghai and even beyond.

She learned to make the specialty dumplings from mother Zhou Lijuan, who died last year. Zhou spent all her life improving the taste of the snack. During the annual Peach Blossom Festival in Nanhui, she would create shaomai in the shape of peach blossoms, which delighted visitors to the area.

“My late mother, however, hated too much promotion and marketing,” Zheng says. “She was content to set up a booth at local temple fairs, and her shaomai sold out in hours. But I’m different. I want everybody know that our shaomai is unique and the best.” 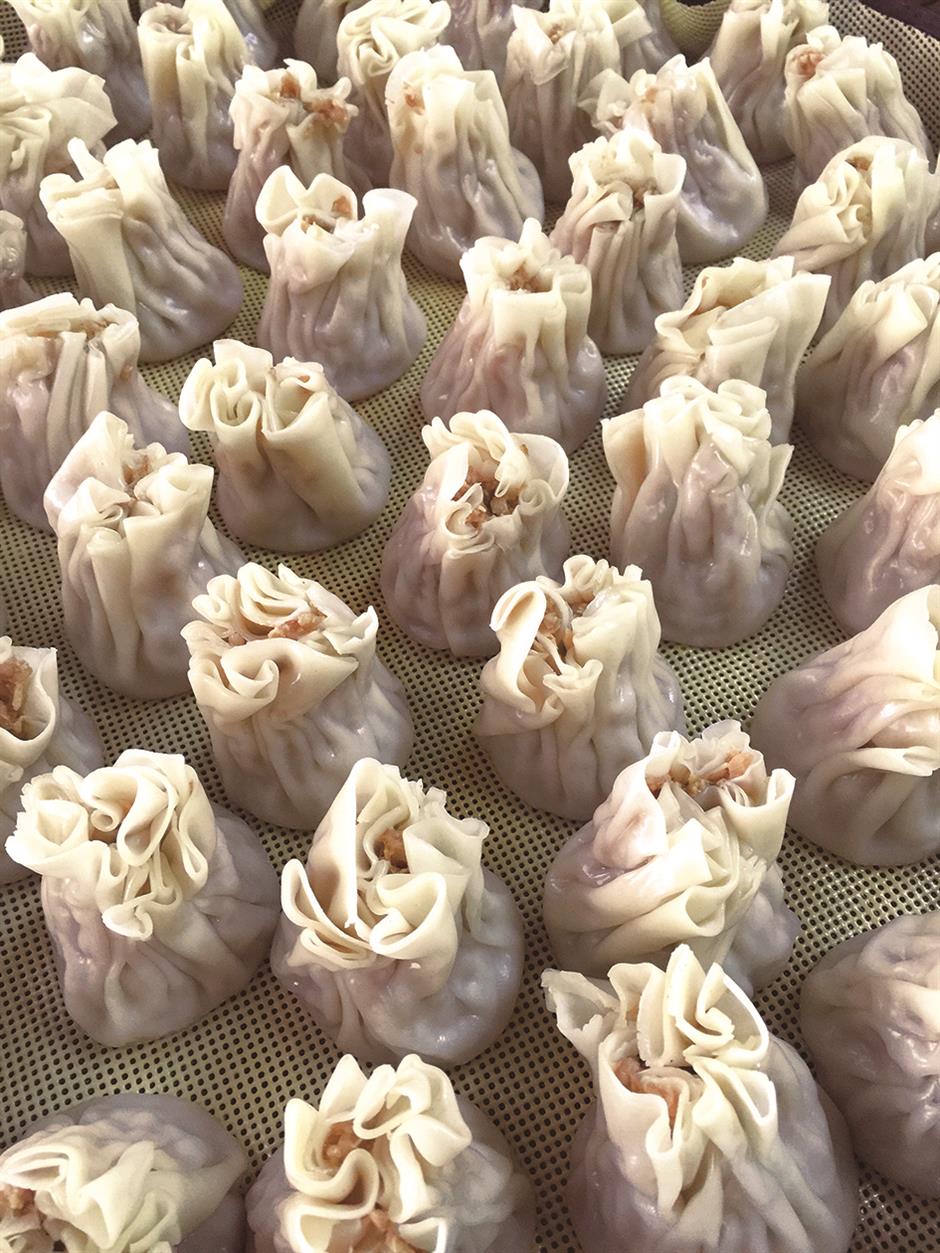 In the era before WeChat and Weibo, Zheng did the marketing herself. Every day she carried a cooker filled with steamed shaomai to high streets and back lanes, peddling the dumplings until the last one was gone.

She once took a three-hour bus trip to a refuse-processing plant to promote her shaomai. Afterwards, she conceded that the idea was perhaps a little too crazy.

“But at that time, I didn’t think much about it,” she says. “I just felt that it was my duty to let as many people as possible become acquainted with our shaomai.”

Zheng’s stubborn strategy was not in vain. More people began to talk about a delicacy they had never heard about before. New branches of her eatery were opened in Pudong, Yangpu, Jing’an and Changning districts. She registered a trademark for the shaomai, and her son, an artist, designed the logo for the trademark.

But fame and success don’t always equal happiness. Before long, Zheng discovered that Xiashao Shaomai copycats in the city outnumbered her authentic outlets.

The fake franchises have names such as Xiasha Special Shaomai or Xiasha Old Street Shaomai — close enough to Zheng’s trademark to cause confusion. In fact, most people wouldn’t know the difference.

“My friends and relatives often call me and ask if a new franchise that opened near their home is one of mine,” Zheng says. “And no, none of them are, even if they promote themselves as ‘cultural heritage’.”

She never goes to Zhaojialou, an ancient watertown in Minhang District, anymore because of the row of fake Xiasha Shaomai copycats on the street.

She tried to complain to local authorities, but it was in vain.

“If there’s a crackdown on some of the fake franchises, new ones quickly open to take their place,” Zheng says. “We can’t stop it once and for all, maybe because it’s not really that difficult to make shaomai after all.”

The quality of the ingredients, however, does make a difference. Zheng only uses the freshest pork and bamboo shoots, and never uses yesterday’s ingredients in today’s dumplings. That would affect the taste, she said.

The fake franchises, however, care more about cost-cutting than quality, she claims.

“We know that some of them don’t even have business licenses, and they use quite low-quality meat and oil,” she says. “That affects our business because customers don’t know what is genuine and what is not. We once had 12 franchises in the city, but now we have only three.”

Zheng says she feels frustrated, but her son Gu Zhengyi, the logo designer and a sculptor, is not ready to give up yet.

The former college art teacher decided to quit his job and join his mother in the shaomai business years ago because he believes it is his responsibility to inherit the family business and the cultural heritage of the dumplings. Just as his mother did decades before. She has taught him all the secrets of making truly memorable shaomai.

“In my memories of childhood, my mother was always very busy, and every year after the Peach Blossom Festival, she would fall sick because of overwork,” he says. “I want to protect the brand of Xiasha Shaomai as a local culture and ensure that no shoddy copycats are in the market.”