It's the nature of things: Community gardens relieve urban pressures

A garden oasis creates tranquility amid the urban landscape. 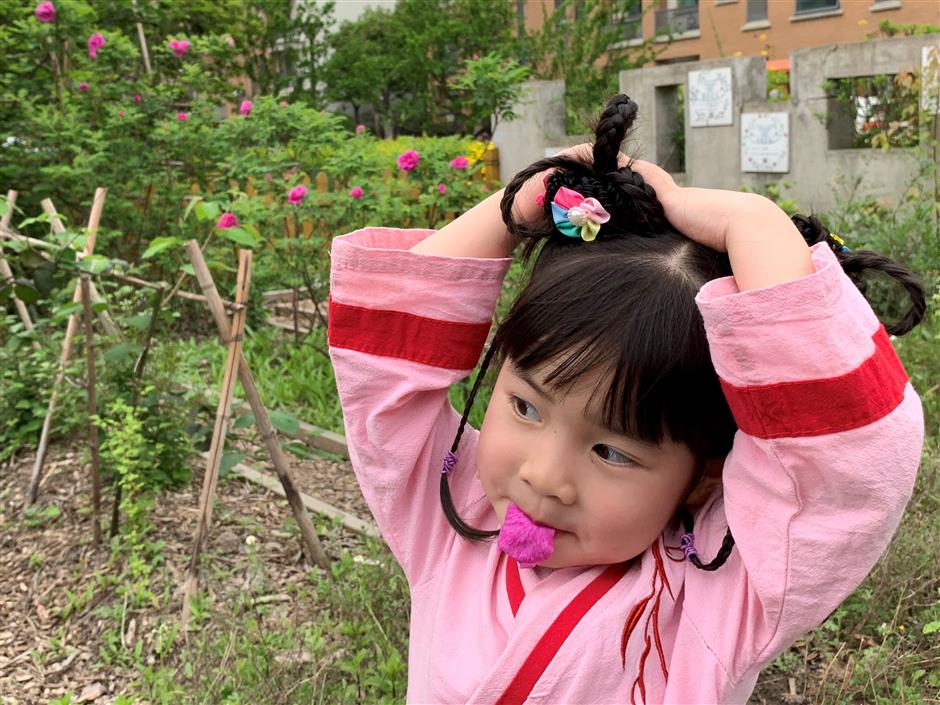 “Family is not only comprised of parents but also the friends living nearby. We help, study and play with each other. I love this big community-family,” fourth-grader Zheng Hanwen writes in a composition shared online.

Her “extended family” lives in a quarter-hectare community near Daxue Road in Yangpu District. It has a distinguished community garden called Knowledge and Innovation — a cooperative project between local residents and Shanghai Clover Nature School, a non-governmental organization.

The garden not only provides a natural, pleasant environment to the neighborhood but also as a magnet for social intercourse.

“My husband and I are busy with work, so Nono was looked after by her grandparents,” says Zhang Yanmei, 47, using Hanwen’s nickname. “She was always a very shy girl due to lack of social interaction. But now, she’s become outgoing, thanks to the community garden. It’s a place for her to make friends.”

“Living in the city, we tend to feel lonely though we are in the midst of so many people,” she explained. “The garden allows us to gather together and improves the neighborhood.”

Indeed, many people caught up in fast-paced lives, hectic work schedules and crowded living environments yearn for the tranquility of nature and a sense of belonging. The garden brings those benefits to the doorsteps.

Natural, ecological and friendly, the garden’s more than 200 plant species not only offer visual enjoyment but, more importantly, foster a community spirit and interest in botany.

“Actually, every one of us is a master of the city, or at least a master of the community,” says Liu Yuelai, a teacher at the College of Architecture and Urban Planning of Tongji University and president of Clover Nature School. “However, we always relinquish or even ignore our right to manage landscape space. We are merely customers or passive bystanders.”

Strengthening people-to-people and people-to-nature relations, Liu and his team seek to create gardens that are beautiful, organic and people-friendly, bringing together residents of all ages and walks of life.

“This kind of landscape is living,” he says. “It is about you and me.” 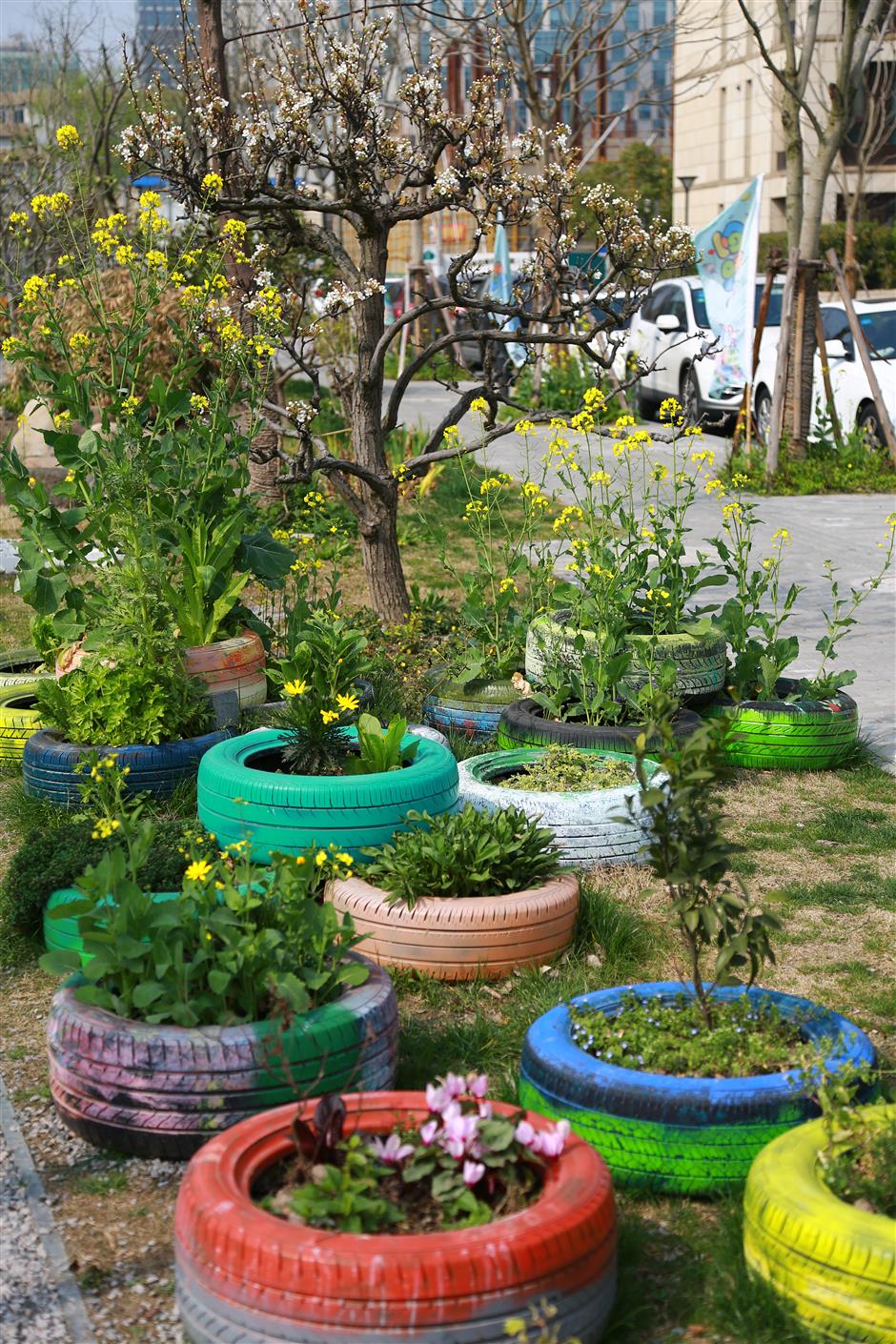 Painted tires are used to plant flowers in the garden. 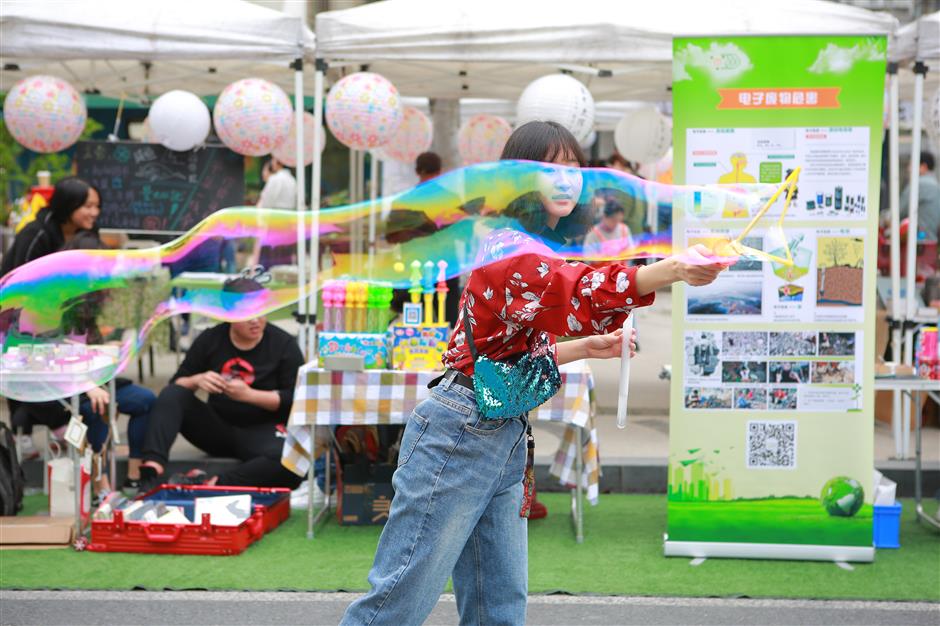 I recently visited the garden just after a garden festival that featured a farmer’s market, talks on botany, an open-air concert and an improvisational dance workshop. The event attracted a lot of people.

Wearing a hanfu — traditional dress of the Han Chinese ­­— a little boy nicknamed Douding takes me to a small pond. Lying on the ground, he puts his hand into water teeming with tadpoles. The lad informs me that they will grow into toads, not frogs, because their color is darker than that of frog tadpoles.

“The tadpoles are the third generation,” Liu later explains.

I am taken aback by the youngster’s knowledge of natural science, and he isn’t the only child who surprises me.

In the tiny rose garden, a kindergarten-age girl picks a pinkish blossom and munches on some of the petals. I had no idea that rose petals were edible. The variety of rose growing in the garden is called pingyin, named after its native area in Shandong Province.

In a sandpit, a group of children “plants” a rapeseed flower. The busy little gardeners are very caring, carefully watering the flower.

The garden obviously instills in children a curiosity and love of nature. It offers them the opportunity to observe, feel, listen and taste the natural world — a perfect outdoor classroom.

“The community garden allows children to improve their social skills,” says Sun Xiaoyang, 28, a mother of two. “There are only two watering cans in the garden, so if my son Douding wants to water plants, he needs to communicate with other children.”

The garden has a small area themed on classic poetry, which has piqued her son’s interest in literature, she says. He is also learning to count by playing cobblestones.

Sun says she grew up in a rural environment, moving to the city for study and work. She has now given up a professional career to stay home and raise her children.

“I miss the farmland of my childhood,” she says. “I want my children to grow up appreciating the power of nature. I think our community garden is a spiritual site where I can commune with nature. On weekends, I sometimes visit the place alone just to enjoy the natural solitude and sketch plants.”

This site was not originally designated as a garden. Rather, it was once a derelict area, or so-called “offcut,” not big enough for development. It has a wall on one side that separates a luxury residential block from an old neighborhood.

“The local residents used to say that they were from two different worlds,” Liu says. “People from one side of the wall were ‘first world,’ while those on the other were ‘third world.’ From the very beginning, we intended to try to close that gap.”

Drawing on a Harry Potter reference, he says, “We drew a 9 3/4 Magic Door on the wall, hoping that the door would be open some day.”

That hope came true in March. A door was set into one end of the community garden to encourage residents to mingle more by cutting walking times from either side of the wall to two minutes from 10. 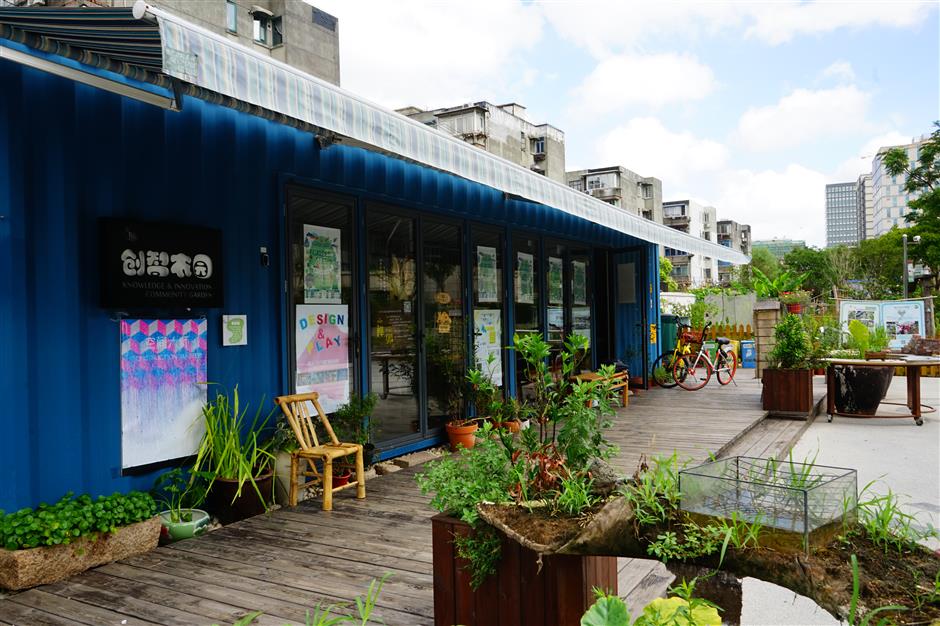 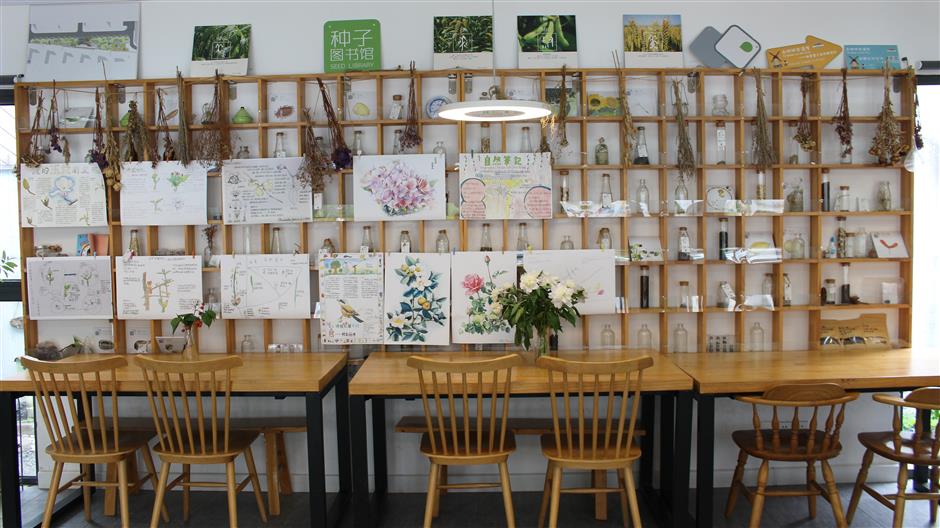 A seed library is a repository for future garden plants and contains botany notes written by children.

In the center of the garden are several blue containers that serve as a “community reception room.” It is a combination of cafe, classroom, lounge and meeting place.

Many of the bottles are labeled with the name of the plant species and the date the seeds were collected. Many came from plants in the community garden.

According to the staff, residents can “check out” seeds from the library and plant them at home, as long as they promise to take good care of them.

A green garbage bin that stands beside the community room converts kitchen and garden scraps into organic fertilizer.

“After lunch, white-collar workers in offices nearby sometimes stroll in the garden,” Liu says. “In summer, they often bring watermelon rinds and throw them into the bin.”

The community garden has a sound ecosystem. No pesticides are used. Harmful insects are eaten by the frogs.

The garden has a bowl of water on the ground for pet dogs. Their owners are invited to dump dog poop into a worm tower that is moved from place to place to allow the worms to loosen and enrich the soil.

Zhao Yang, 23, works at Clover Nature School while doing part-time work on a postgraduate degree in a design program at Tongji University that focuses on embracing all people and creating sustainable and innovative settings.

Zhao, who has a degree in landscaping, once interned at a landscape design company working on a commercial project.

“The design of that project was not realistic or centered on users,” he says. “It made me feel like a server. My work experience at Clover Nature School allows me to get to know the grassroots and see more possibilities. We, as designers, should focus on local residents and transfer our experience to them.”

According to Zhao, most designers are in ultimate pursuit of beauty, creating fancy blueprints for clients. Community programs are quite different. There, design plans need to be simple and clear.

“Our goal is to have the residents take over a project,” says Liu. “It normally takes more than five years to achieve the goal. This community garden has been in existence for three years. It is still mainly operated by our organization.”

According to Liu, they prepare 10 keys to the door of the “community reception room” to give to local residents who are truly the garden’s keepers. Five have already been allocated to housewives and those working from home. 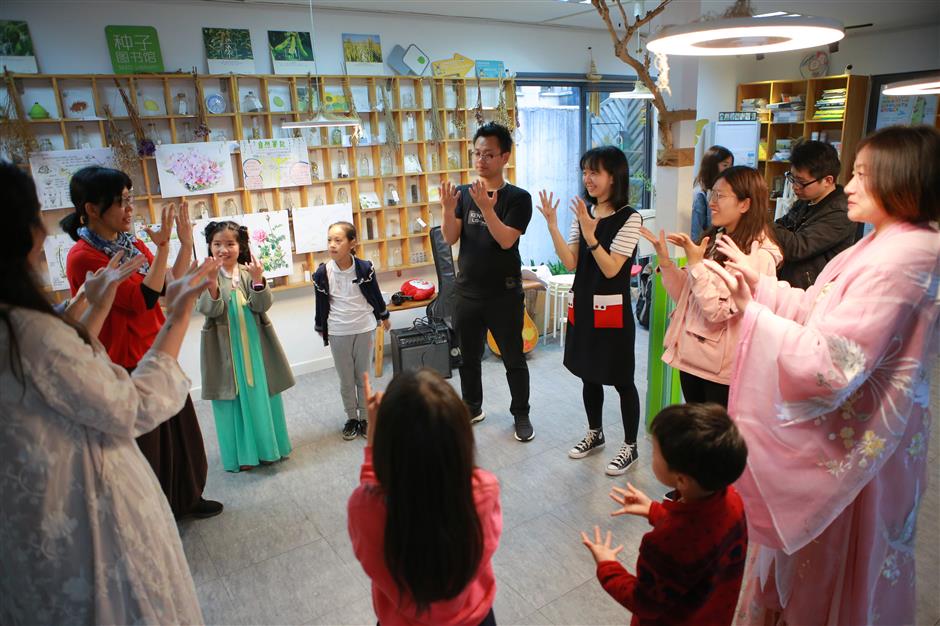 A dance workshop in the garden attracts people of all ages.

Clover Nature School has fostered about 60 community gardens in Shanghai.

Established in 2014, the organization’s first program was Railway Park in Baoshan District.

In 2016, it developed the Hundred Herb Garden in a neighborhood near Tongji University. Two local teams, mainly comprised of elderly plant lovers and young volunteers, have taken charge of the maintenance of the garden.

I meet one of the herb garden volunteers, Jiang Haitao, 14, in the Knowledge and Innovation community garden. He has come to enjoy the festival and observe changes in the plants since his last visit.

“Like the Knowledge and Innovation community garden, the Hundred Herb Garden in my neighborhood used to be a wasteland,” Jiang tells me. “But now it’s a very beautiful garden. I transplanted my cockscomb flowers to the garden in 2016. I look at them every day on my way to and from school. They are my friends. They make me feel happy and relaxed.”

The budding botanist also takes care of plants at school, and says he plans to collect more seeds and plant them in the garden.