Kid No.2: Double trouble or twice as nice?

A mother of two kids will likely face more challenges and pressures than the mother of only one.

If she is to continue her career, she needs the support of her family, especially her parents and parents-in-law.

“I think the main problem for working couples with two kids is limited time,” said Shi Ke, mother of two boys and editor-in-chief of a fashion magazine.

“If I can have someone to take them to and from school and make dinner, I am able to handle other things, like their homework at night.”

Luckily Shi‘s kids have four grandparents at hand. Her husband, Yang Fan, runs four Western-style restaurants in town and is even busier than she is.

Before the boys went to school, one was taken care of by Shi’s parents while the other lived with Yang’s. Shi and Yang worked during the week and took the brothers on trips during vacations.

“This continued for more than three years. My parents and my husband’s worked so hard, and did a lot for us,” Shi said. 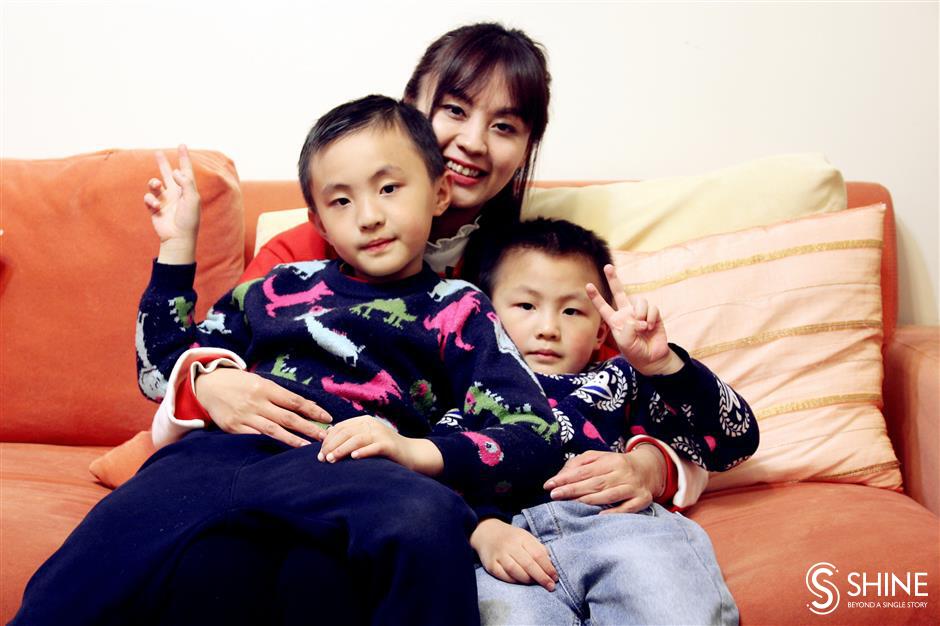 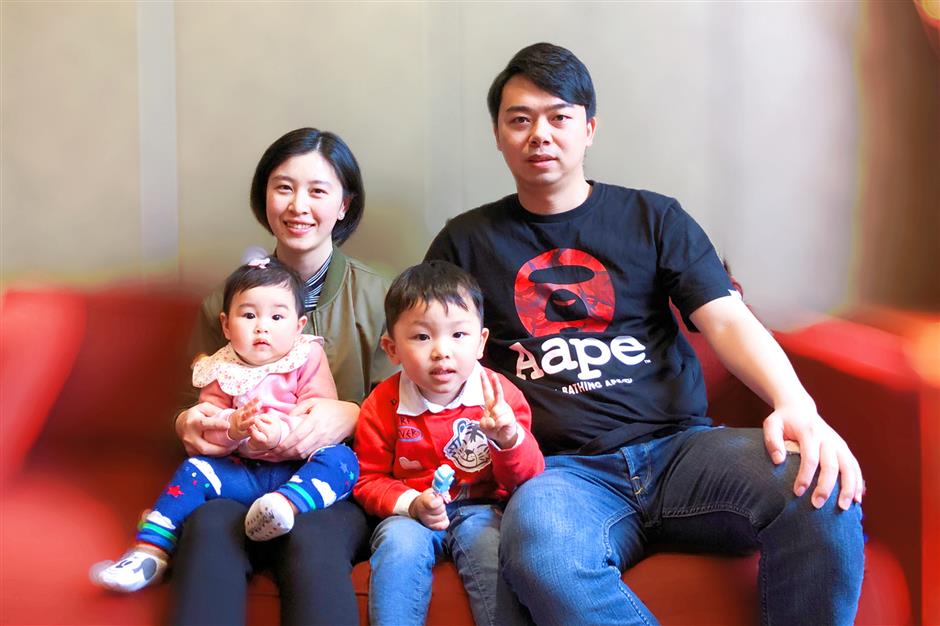 A family photo of Fan Zhijuan, her husband and their two kids.

Fan Zhijuan, an office worker and mother of a 3-year-old boy and a 9-month-old girl, lives with her parents-in-law.

“When my boy was little, I mostly took care of him myself. When my girl was born, he began to sleep at his grandparents’ place,” said Fan.

“My mother would come over to help out sometimes, when all of us had to work during day,” she added.

If a mother of two is a stay-at-home mom, usually she can handle almost everything by herself. At the same time, a considerate husband who is willing to help after work is a super backup.

Having two kids is a good thing, but it is also very important to keep yourself happy no matter how hard your situation is.

Zhong Lijia, a former designer and now a full-time mother of two daughters, has an agreement with her husband Yu Bing that he must try his best to be at home and take care of the kids after work.

Yu returns around 7pm and plays with the kids, helps them to have their bath and tells them stories after dinner.

“I try to take some pressure off my wife and alleviate her stress after taking care of the kids all day,” he said.

“In my family, my husband comes home to take care of them if he is not on a business trip, and lets me have time to go to the gym,” said Wu Yanqing, a stay-at-home mother of two boys.

Wu’s husband Zhang Peng, an executive at a foreign company, is in charge of feeding the younger boy, and helping the elder one with English and Math. 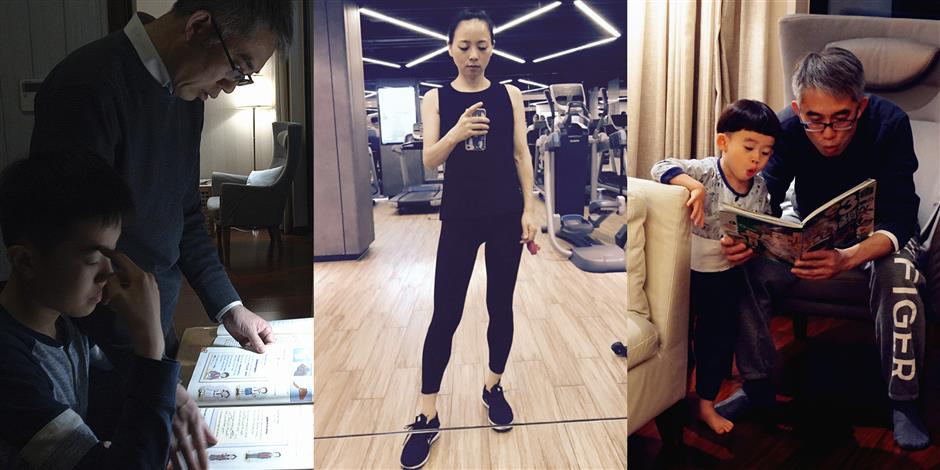 When Zhang Peng is off work, he helps with the elder son with his homework (left) and reads stories to the younger boy before he goes to bed, and lets Wu have time to go to the gym (middle).

Taking care of two at the same time brings more worries and anxiety than one might imagine.

Fan listed four things which caused her anxiety, including preschool. She has different ideas about education from the grandparents who she thinks spoil their grandson.

Wu who mostly takes care of her children on her own worried about not having enough time to herself.

“No time to learn, no time to read,” she said, “I want to return to the work one day. No matter when, it’s never too late to chase your dreams.”

Zhong knows it is important for a mother to control her moods and has made friends with mothers living nearby who face many of the same issues as she does.

“They say a problem shared is a problem halved. When you share your problem with someone and they share theirs with you, both problems seem easier to handle,” she said. 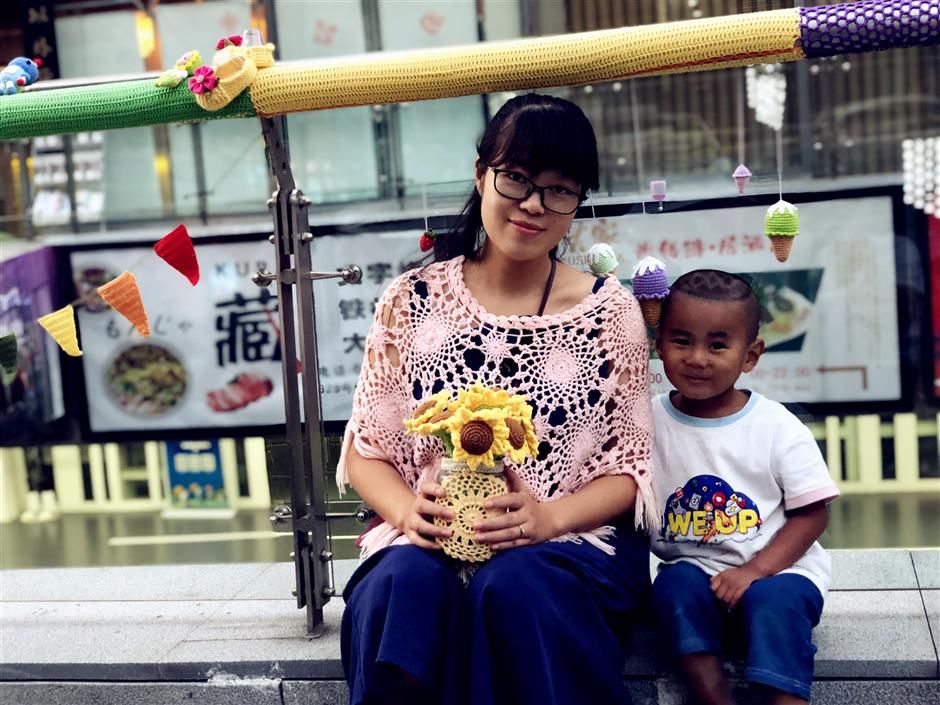 Knitting is a way of relaxation for Mao Wan, a 30-year-old mother with two kids. She even claims to have conquered postnatal depression by knitting.

Mao, together with 20 other mothers across the country, used their knitting to decorate a street in the Pudong New Area and became a wanghong, or online celebrity.

Three years have passed since China began to allow all couples in urban areas to have two children. Although the birth rate has fallen so far, over 50 percent of newborns each year have been second children. But is it is worth the time and effort to become a mother-of-two?

No matter when, it's never too late to chase your dreams.

“Be daring to welcome a second baby,” said Zhong. “Having two kids is a good thing, but it is also very important to keep yourself happy no matter how hard your situation is.”

“I suggest they think about their realities and capabilities before they make up their mind. Do you have manpower to help you take care of two kids? Do you have enough energy to handle two? Do your family have enough financial resources to meet their needs? If ‘yes’ to all, you should have your second,” Shi said.

Wu has a similar opinion to Shi.

“It’s not for others to ask you to have another baby, you should ask yourself if you really want to do it. The key point is whether you and your husband can come to an agreement,” Wu said.