All the world's a stage for drama devotees 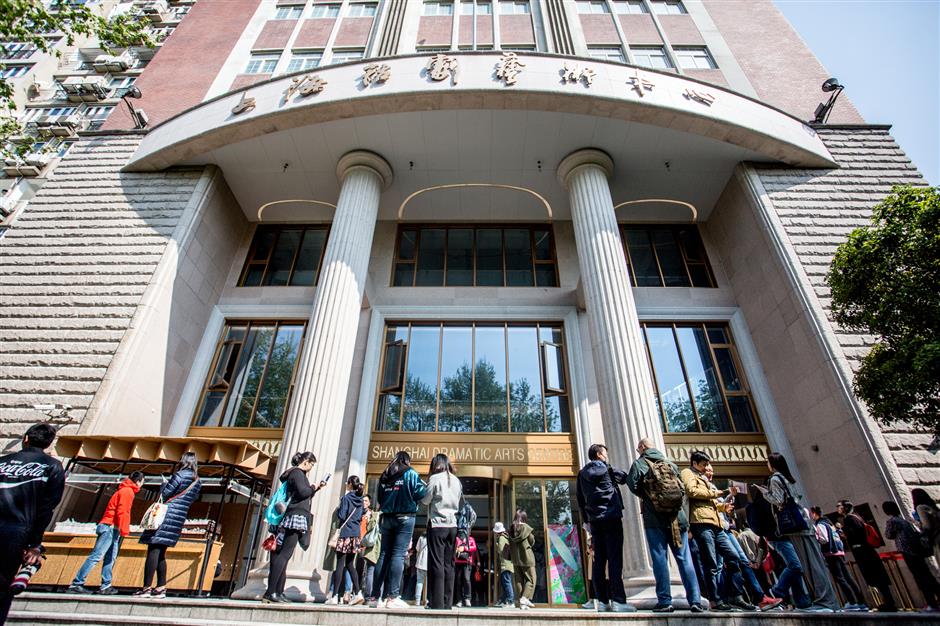 The Shanghai Dramatic Arts Center reopens after a 17-month renovation.

For local theatergoers, 288 Anfu Road is a magical place where they have spent many evenings watching drama come to life on stage.

Located on the tranquil, historical street of cafes, bakeries, art studios and time killers, the Shanghai Dramatic Arts Center has reopened to the public after 17 months of renovation. It is the only national theater company in the city.

“There will be more people coming around again,” a shop assistant in an essential oil store opposite the theater said happily.

A bronze statue of Huang Zuolin stands in front of the theater gate. Huang was a drama maestro and chairman of the Shanghai People’s Art Theater, which was consolidated with the Shanghai Youth Drama Troupe in 1995 to create the Shanghai Dramatic Arts Center.

Unlike more luxurious theaters in Shanghai, the arts center is housed in an 18-story Art Deco building. Most people, even frequent patrons, might miss seeing the relief panel that decorates the top of the facade.

The sculptural wall is carved with a muse holding a shield in her left hand and a spear in her right, signifying perhaps the conflicts, the spiritual shackles and the emancipation of drama professionals in bringing a play to life.

Under the “blessing” of the goddess of art, Shanghai Dramatic Arts Center will continue to create an array of widely acclaimed works, attracting large groups of theater enthusiasts. 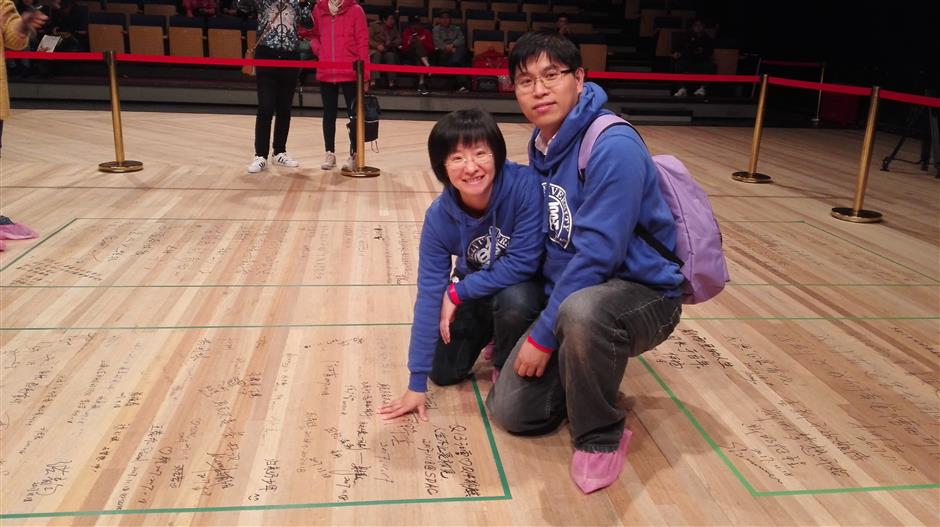 Angel Jiang and her husband Zheng Qi left a message on the floorboard of the center on the last open day before it closed for a makeover.

Jiang saw her first play at the Shanghai Dramatic Arts Center in 2009.

“In the very beginning, I didn’t know how to choose a play, so I attended almost all the performances,” she explains. “I think I saw more than 100 shows a year.”

After two years of sampling everything, Jiang says she became more discerning.

“I did ‘homework’ before making decisions,” she says. “I read plays and considered the creative team and the cast behind each performance. Now, I attend maybe 40 plays a year.”

Drama wasn’t confined to the stage. Jiang met her future husband Zheng Qi at the center in 2014 on one of the theater’s half-price days.

“I got up late and asked a friend to stand for me in the queue,” Zheng says. “For some reason, he needed to leave early, so he gave the task to another friend, who became my wife later.”

Since tickets were cheap, Zheng wanted to attend all the shows. Jiang gave him advice on choosing plays. They became WeChat friends and found that they were both Fudan University graduates.

Love of theater bonded their love. They had a photo of themselves taken in front of the Shanghai Dramatic Arts Center on the day of their marriage registration.

The couple show me a dozen theater programs that include the seals featuring the shows they attended and the autographs of some of the actors.

The couple paid a special visit to the arts center on the last day before the renovation began and the theater closed. They left a message on a huge wooden board made of the center’s old floors.

Boards of well-wishers’ comments are exhibited on the third floor of the newly renovated center. 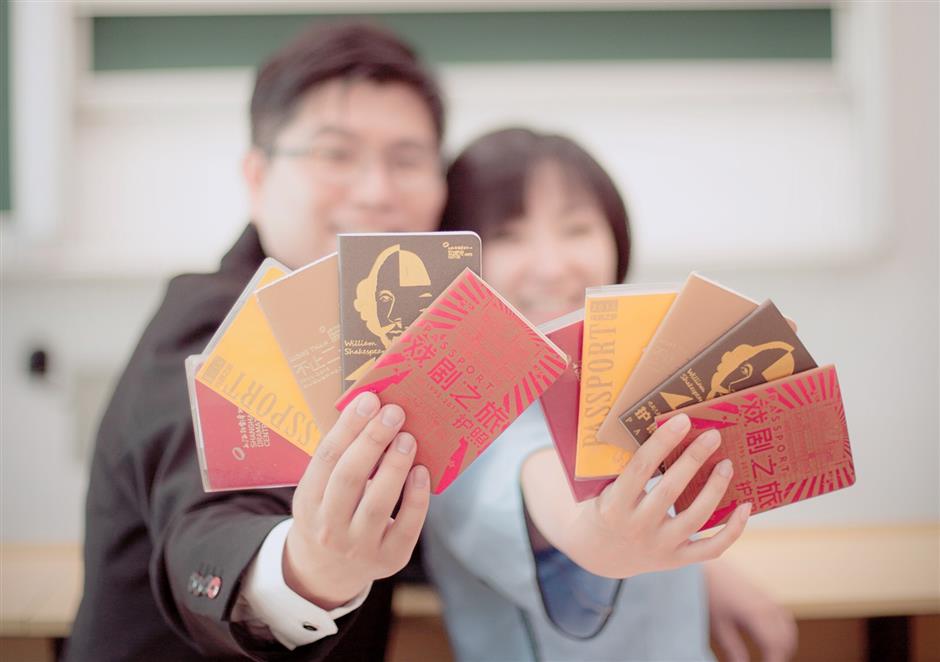 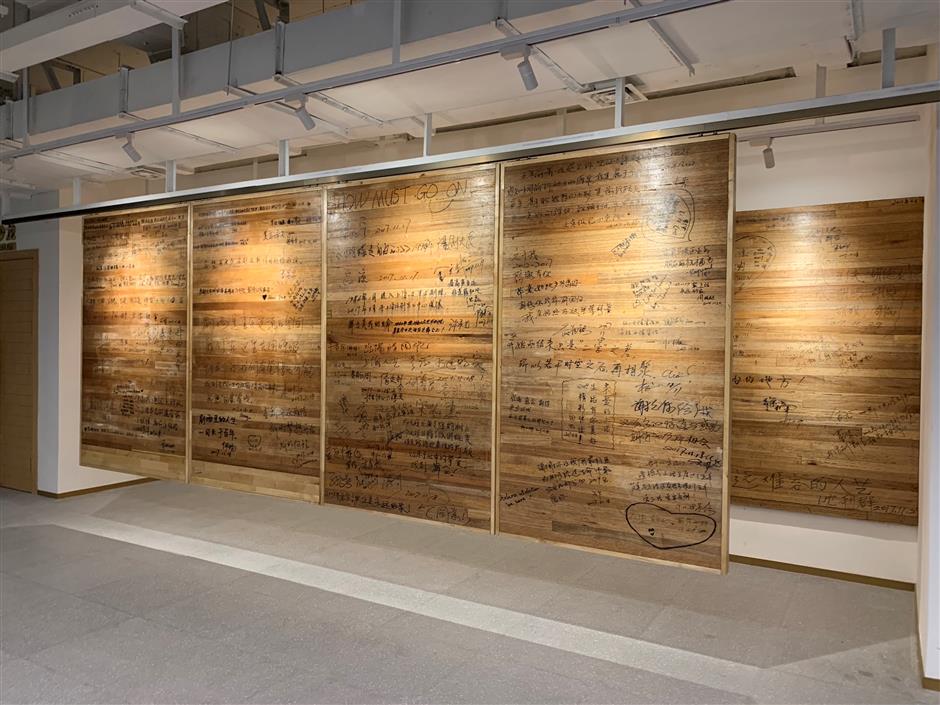 The center’s old floorboards, imprinted with messages from drama fans, have been preserved and are exhibited on the third floor.

“Many audiences treat the center as their home,” says Chen Li, public relations director of the center. “Staff and audiences are like family members. We wanted to create a more comfortable environment for our audiences through the renovation.”

The height and the color of theater chairs, the marble wall and the floor tiles in the hall were all carefully chosen by the staff. The number of stalls in the ladies’ restroom was increased, and the seating capacity enlarged. The stage machinery, audio gear and lighting were all upgraded.

The revamp has turned the arts center from a mere theater into an integrated public space. From second and third-floor lounges, theatergoers can enjoy the peaceful street views of Anfu Road.

Two exhibition areas are located on the sixth and seventh floors. One showcases the history of the center and the development of drama in Shanghai; the other is reserved for special exhibitions. 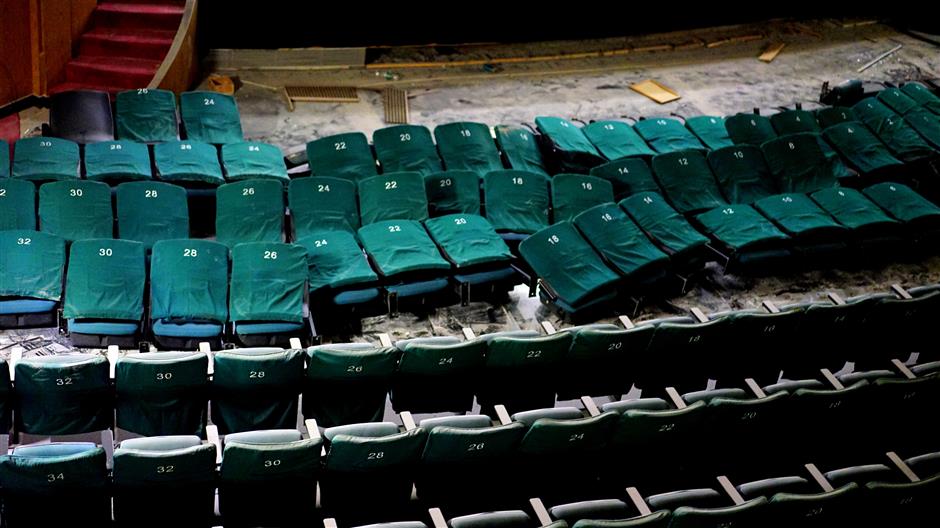 Old theater chairs were pulled down during the renovation. 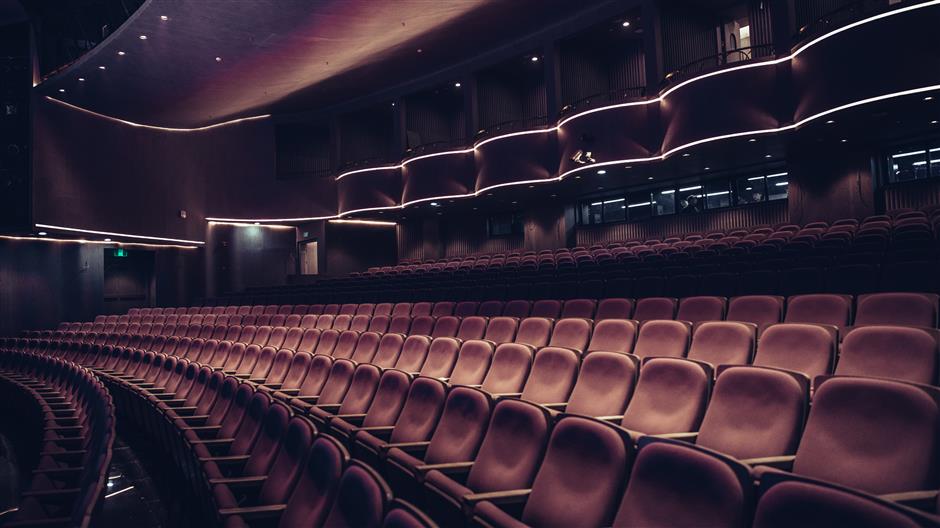 The height and color of new seating were carefully chosen by the center staff.

Chen has captured the entire renovation process on film.

“I often took photos every Thursday afternoon,” she says. “The whole process was very interesting.”

She has been working at the center since 2007 and loved every minute of it.

“During my internship at the center, I felt like I was attending class rather than working,” she says. “The atmosphere here is free and easy. Even today, I keep learning new things at work.”

She cites the latest show, “The Heart of Heroes,” as an example. Inspired by the manufacture of the C919, China’s first domestically developed narrow-body passenger jet, the play tells the story of three generations of aircraft engineers.

To better understand the theme and promote the production, Chen and her PR team did a lot of research, including watching documentaries and reading books on China’s aviation history. With other staff and actors, they visited an aircraft company.

“After the research and the contact with the engineers, I realized that the problems of my life paled by comparison,” says Han Xiuyi, an actor from the center who portrays the character of Xu Xinhua in the production. “Facing extremely challenges, these unsung heroes never complained.”

“The Heart of Heroes” will vie for the Wenhua Award at the 12th China Art Festival that opens on Monday in Shanghai.

Unlike TV dramas and movies, which are flat and two-dimensional, live theater sweeps audiences into the story and makes them indirect participants. Audiences easily make emotional connections with the characters on stage, who come alive as real people.

“We actors and audiences breathe the same air in the theater,” says Zhang Lu, an actress who plays the character Tang Ying in “The Heart of Heroes.”

“As a theater actor, I am lucky to be able to experience different lives in different shows,” she says. “For most people, the trajectory of life is settled. However, theater offers boundless possibilities.”

Most in the business would argue that acting on stage is harder than performing before cameras, where mistakes can be patched over and multiple retakes can cover spotty performances.

“Drama is a very rigorous art,” says Han. “Once the curtain rises, there is no chance for a fresh start.”

Live theater is rife with uncertainties. An actor may grow hoarse. Mechanical equipment may break down. Chen says there are always contingency plans in place, but you just never know what will befall a performance.

“On several occasions, we were on the verge of having to cancel shows,” she says. The letters of apology to ticket-buyers, the press release to the media and ticket refunds were all prepared in advance. Fortunately, the shows went on.”

Although it’s actors in the spotlight, behind-the-scenes staff, working in the shadows, make or break the success of performances.