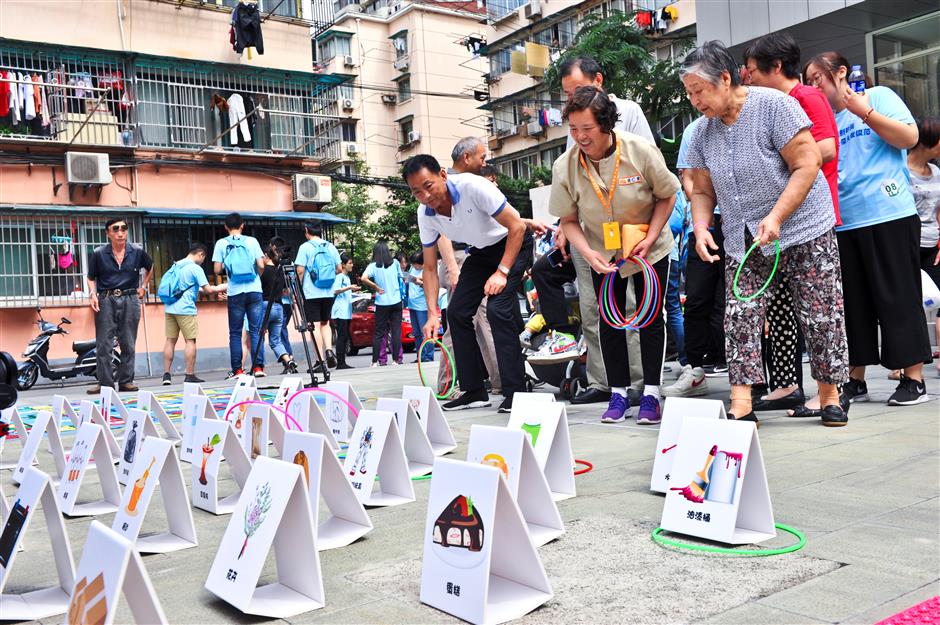 An orienteering activity is adapted to help people familiarize themselves with garbage-sorting in the Nandan residential community.

There are probably few people in Shanghai who aren’t familiar with the highly publicized do’s and don’ts of the city’s new garbage regulations. Beyond the obvious advantages for the environment, separating trash has created new social cohesion in many communities.

“Most of us don’t know our neighbors,” Yao Dong, associate professor at the Architecture Faculty of Tongji University, said in a lecture on the garbage sorting. “The trash issue promotes social connections within our communities.”

One old neighborhood Party secretary has posted photos on his WeChat Moments showing neighbors chit-chatting in front of garbage bins. His message: The waste drop-off times at local disposal depots bring together residents who might not otherwise see each other.

“Garbage sorting is more than an environmental issue,” Yao said in his lecture. “It is a bonding issue. Our lives tend to be isolated nowadays.”

An architect academic giving a lecture on trash may sound strange, but teaching students how to develop strong civic responsibility is proving beneficial.

Carrying his own reusable coffee cup on the day I met him, Yao said he is interested in the environmental protection and has been following the trash issues for almost four years. His experience working with renovation projects in old communities has highlighted how garbage can exacerbate neighborhood relations, he said.

Located in Xujiahui in Xuhui District is a residential area called Nandan. It underwent a makeover by Yao’s team in 2017. Built two decades ago, it is a high-density neighborhood, with per capita housing area of only 4 square meters.

Passageways cluttered with outdoor vendors, corridors piled with garbage and public space illegally put to private use aggravated conflicts within the community.

I visited the community at 8 on a Wednesday morning, before the morning close of the trash depot at 9, I found a totally different Nandan — clean, orderly and vibrant.

“The community has changed tremendously, not only the environment but also our relationships,” said Pi Meifang, a long-time resident and the director of the neighborhood committee.

Eighty-seven people from the neighborhood do volunteer work in the trash-sorting campaign. Among them, 28 people are long-term volunteers, whose average age is about 65 years old.

“The promotion of garbage sorting relies on volunteers,” said Pi. “They have strong appeal to neighbors.”

The volunteer team was initially established in 2006 to do neighborhood patrols. It was a natural transition to help supervise trash sorting and disposal.

“Being a volunteer is like working,” volunteer Wu Xiaoding, 69, told me. “Everyone is conscientious and nobody is late. And we still have time to water the vegetables growing in our public garden twice a day.”

According to the residents, the garden site was once a public dumping ground until the renovation program swept it clean.

I first met Wu and other volunteers at the trash depot. The site isn’t hard to find. During morning and evening disposal hours, it’s busy. The volunteers are easily spotted in their green vests.

White-collar workers who come to the depot are in a hurry. They don’t want to be late for work.

Retirees take a more leisure approach. They have time to stop and talk with neighborhoods.

The residents seem well-grounded in the rules for separating waste into four categories: dry, wet, recyclable and hazardous.

“Our residents, especially the elderly people and children, are doing a great job of following the rules. We live in an old residential community where most residents know each other, at least in passing. Therefore, being found in violation of the regulations would be humiliating.” 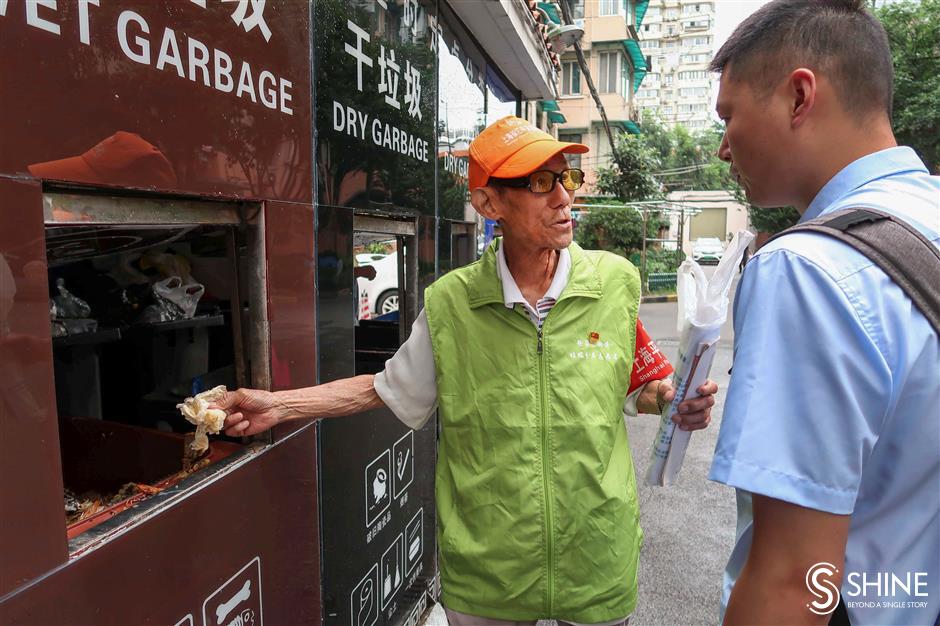 At the depot, the volunteers carefully check whether the household waste has been correctly separated. They work with hawk’s eyes.

During my stay, a young man mistakenly mixed some paper with food waste. Zhou Xuande, 84, leader of the volunteer team, quickly pointed out the error with a cheerful demeanor.

Despite his age, Zhou is full of vigor.

“During rainy days, I am still on duty,” he said. “I sometimes take off my green vest to observe the trash disposal discreetly. I find that 98 percent of residents dump correctly. As a member of the Nandan neighborhood, I have a responsibility to take care of our community.”

Many young netizens bristle online at criticism from older residents, who defend themselves as simply doing their civic duty.

“We treat the young residents like our own children,” said volunteer Wu. “We feel wronged when we encounter people who are unreasonable, but we never argue with them. We just do our best.”

Amid complaints about the rule that wet garbage has to be emptied from bags into the bins, the neighborhood committee has placed a sink, tap and liquid soap next to the trash depot for people to wash their hands. They also provide a saw-like gadget for ripping open the bags without soiling the hands.

“Plastic bags are not allowed to be mixed in with food waste, so people have to pour out the oily contents,” Pi said.

A handwritten announcement in English, posted on the gate of the trash depot, gives its opening times. According to the neighborhood committee, about 100 of the neighborhood’s 2,421 households are foreigners.

To better publicize garbage sorting, the Nandan residents created a mini Huaiju opera under the guidance of a professional teacher.

At the end of my interviews, the volunteers sang for me. The lyrics were quite simple but the enthusiasm of the residents was unmistakable.

The garbage policy has also spawned its own artistic touches. 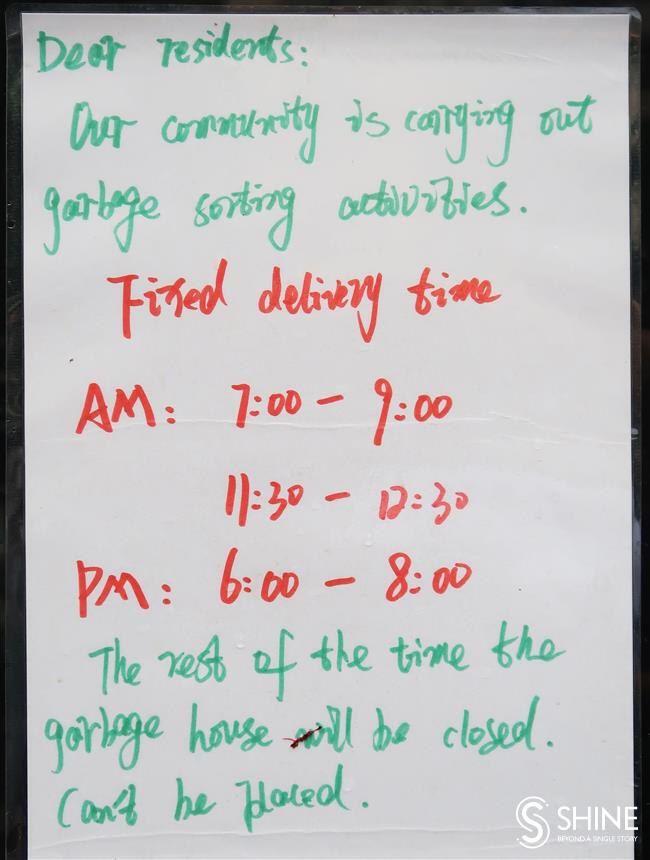 A notice written in English tells expats the opening times of the trash depot in the Nandan community.

“The performance is elaborately designed,” said Wang Lijuan, 59, leader of the cheongsam group. “The main aim is to get people to look at the boards, so there aren’t many movements in our show. We display beauty while educating residents.”

Rehearsing twice a week, Wang and her team members often talk about garbage sorting during breaks. They also play a game themed on garbage classification on their mobile phones and share their scores on WeChat.

“It is a very good way to make sorting garbage entertaining and educational,” she said.

“Nowadays, after the normal greeting of ‘what did you eat for dinner,’ there are discussions about various types of meal remnants and how they should be disposed of.”

As part of the service-education course, such “exchange days” are held annually in different residential communities. This year’s activity is aimed at increasing environmental awareness. 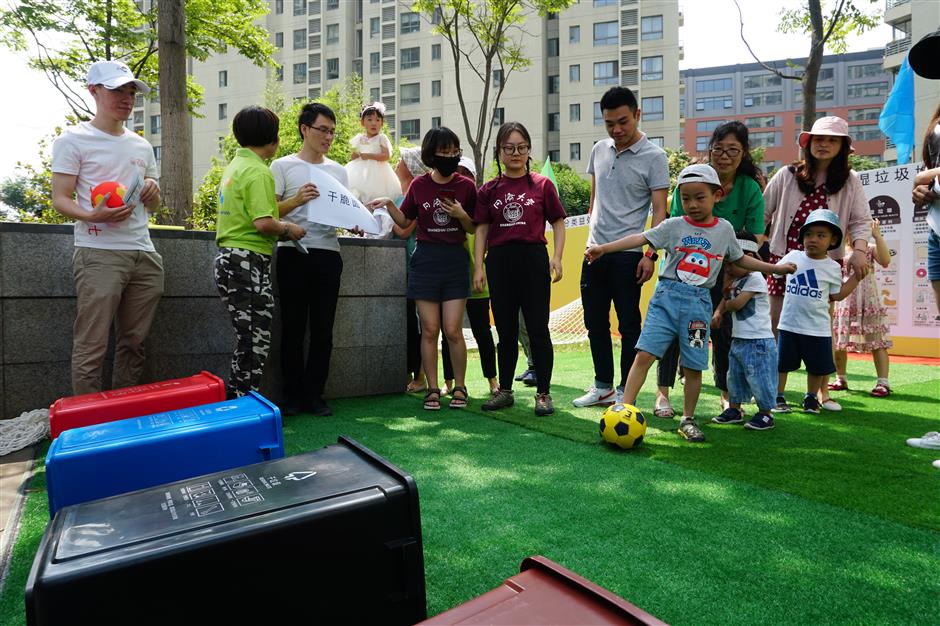 A football game, more than entertainment, helps residents learn the various classifications for garbage disposal in the Mingyuefang residential community.

About 100 people participated. Among them was a 7-year-old boy named Liu Sirui.

“I played football and table tennis and sang a song called ‘Desert Camel,’” he said. “I was very happy and learned a lot about garbage sorting. I am looking forward to more community activities in the future.”

Games are more than entertainment. In a football game, for example, four separate bins serve as goals. Participants have to kick the football into the right bin when the moderator calls out the names of various items of trash.

“Residential communities are the truly vibrant places,” said Yang Ting, 23, one of main organizers of “Yuefang Exchange Day.” “We organizers act as a catalyst to strengthen the bonds between residents. The more activities in communities, the higher sense of autonomy among residents.”

The upshot is obvious. If you don’t know what to say in a social setting, try talking about trash sorting. It’s a topic that resonates with everyone these days.