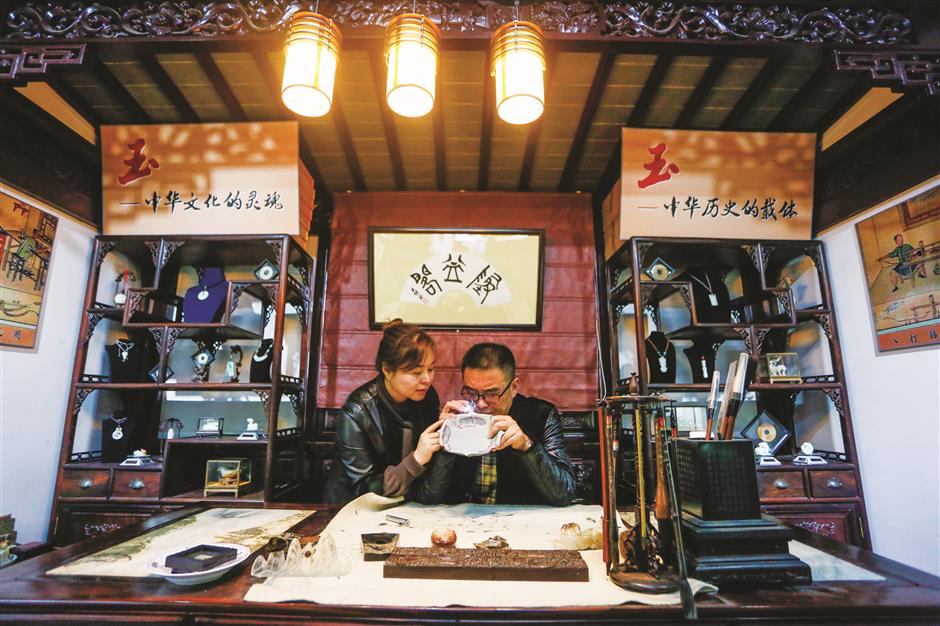 Li Bo, owner of the Diyige Museum, and his wife Zheng Jie scrutinize a porcelain item.

In the past four months since its opening ceremony on March 18 the museum was attended by renowned antique appraisers, celebrities, artists, university professors and antique lovers from near and far, including Japan and the United States.

“Songjiang is nicknamed ‘the Root of Shanghai.’ My private collections museum in Songjiang is a place to entrust my hope of raising people’s patriotism and ethnic confidence,” says owner Li Bo, an entrepreneur working in foundation engineering.

Born in 1960, Li had been a government official in Yixing County in east China’s Jiangsu Province for 16 years. His hometown in the county, Dingshu Town, is a ceramic capital of China. The rich culture of craftsmanship, together with its natural environment of mountains, tea gardens and bamboo forests, contributed to his calm and persistent demeanor. Li’s father, a veteran of the Huaihai Campaign and certain other historic battles, had given him a porcelain item and a jade item in his old age.

His father’s influence and his own innate character led Li to feel a natural attraction to collecting antiques and the opportunity arose in 2000, three years after he moved to Shanghai to become involved in foundation engineering.

Among the hundreds of choice items stored at Diyige, Li is most proud of his collection of ancient jade that can be traced back to various dynasties. 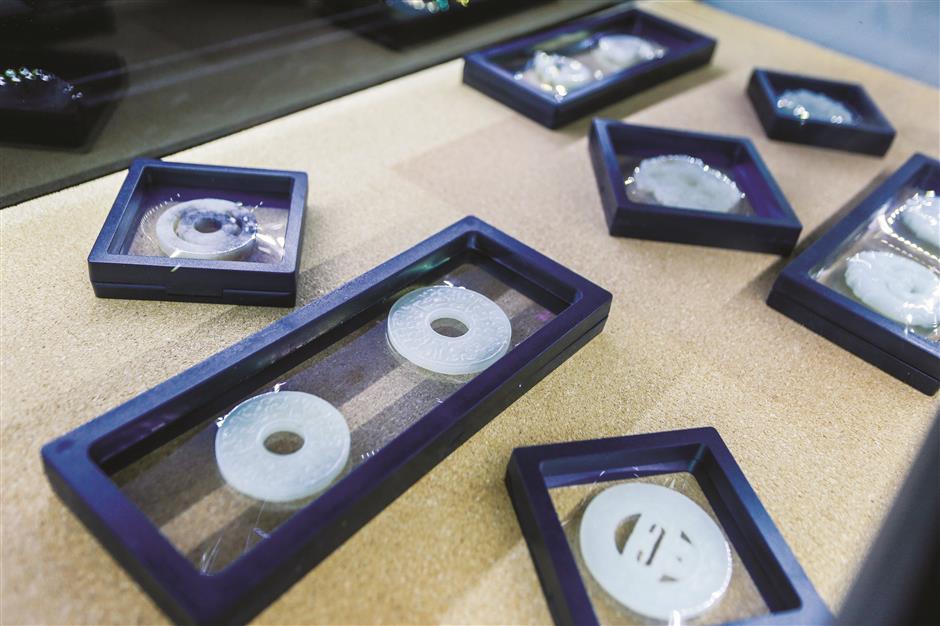 Among the hundreds of choice items stored at Diyige, Li Bo is most proud of his collection of ancient jade that can be traced back to various dynasties.

“Jade pieces in the Shang Dynasty (c.16th century-11th century BC) were mostly shaped like a bird for people then believed their founding emperor was born by a bird and they worshipped the bird totem. In the Zhou Dynasty (c.11th century-256 BC) jade began to be used in ornaments to mark different ranks of different people. As an old saying goes, a man of noble character wears a piece of jade and never parted with it till his death,” says Li.

“The use of jade was still limited within royal society in the Han Dynasty (206 BC-AD 220), whereas in the Song Dynasty (960-1279) jade appeared in ordinary people’s lives. In the Qing Dynasty (1644-1911) jade became more popular because connections with the Hotan region of Xinjiang in northwest China, a jade production area, was strengthened at that time,” says Li.

Zheng Jie, Li’s wife, is as enthusiastic about jade as her husband.

“History reappears vividly through jade. Jade, as if it were a media outlet for history, never stops appearing in China during the 8,000 years of Chinese history. It is like the soul of our nation,” she says.

Li keeps in touch with acquaintances in Ma’anshan in east China’s Anhui Province, Nanjing in Jiangsu Province and other places in China where trading in antiques is frequent, and has gradually built up his private collection.

“To have a good item, a collector has to have good judgment. He also has to have some luck,” says Zheng. “My husband is a kind-hearted man, sometimes his kindness brought him good luck.”

A porcelain trader Li is acquainted with fell into financial trouble several years ago. He asked Li if he wanted to buy a bag of porcelain items so he could use the money to pay for the funeral cost of a parent.

“The dozens of porcelain items cost about tens of thousands of yuan. At that time I didn’t have much knowledge about porcelain. But I bought that bag of items all the same, simply wanting to help someone I knew out of his trouble. Later a connoisseur of porcelain told me that the bagful of items were good ones,” says Li.

When he began to start collecting, Li was sometimes the victim of cheating. But he regarded the experiences with a tranquil mind.

“Having fake items is a learning process for a collector. If a person never experiences fake items, how can he tell genuine ones from the fake ones?” he says.

To help improve their knowledge and appraising ability, Li and Zheng bought professional tools such as microscopes and magnifiers. The couple also frequently visited museums in various places to study the antiques on display and read the accounts of other collectors.

“Collecting antiques is a somewhat addictive hobby,” Li says. “You always want your next item to surpass the current one in this or that aspect.” 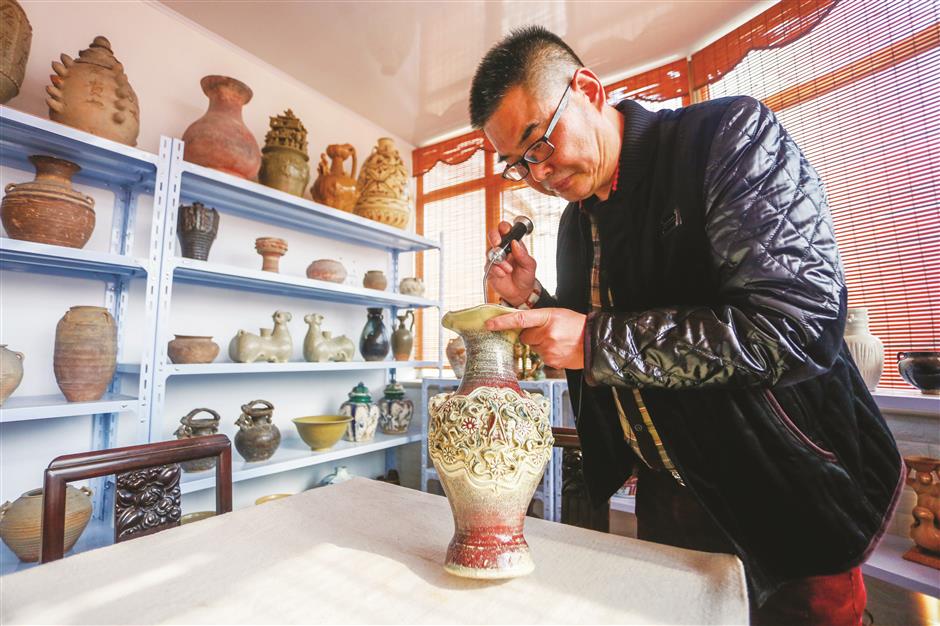 Li Bo watches carefully at a pottery item. Various pottery and porcelain items are also among Li’s collection at the Diyige Museum.