A haven of historic charm and culture

The decision to buy an historic property in the Saint-Emilion region of Bordeaux, France, was a passionate one for Neima Sitawi. Its purchase also meant she could embark on a personal emotional adventure.

The American native and her Italian husband always knew Europe would be their “forever land.”

However emotional the decision was, the strategic investment opportunities were undeniable. The second-tier French city of Bordeaux, which was recently injected with a substantial amount of government funding, is awash in beautiful architecture, much of it, designed by Georges-Eugene Haussmann. 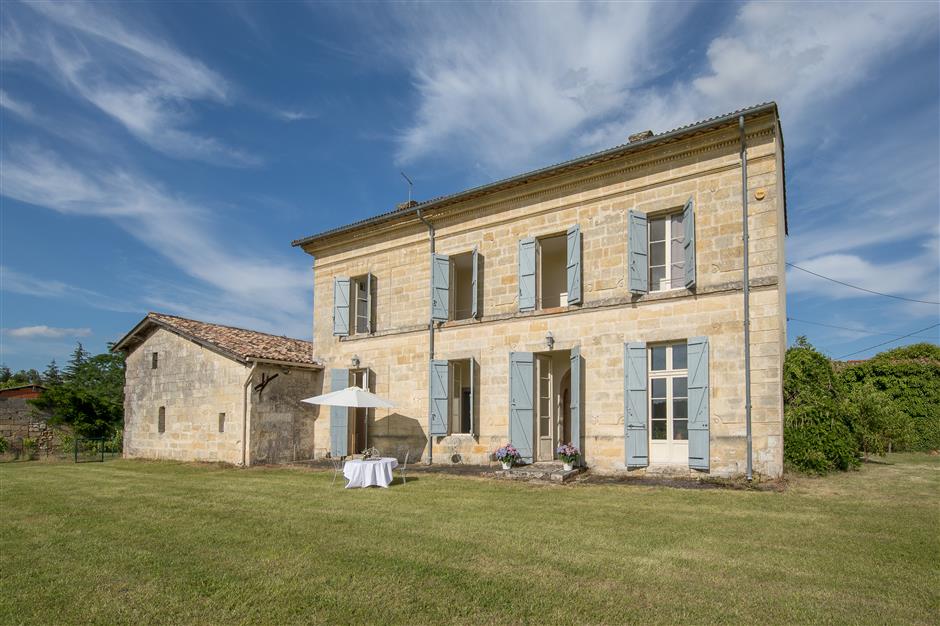 The historic villa originally was used as a wine producing facility by the monks.

It also boasts a two hour bullet train ride to Paris and soon, a five hour train journey to London, not to mention the multitude of direct flights from Asia, America and other European cities.

“We purchased the property in Saint-Emilion area, one of France’s most prestigious wine regions, which welcomes over 1.5 million tourists every year. The area is still relatively inexpensive and it still holds on to its historic charm. We decided to transfer it into a perfect summer home and use it as a bed and breakfast for the months that we are away,” she said.

The particular chateau, the Domaine de Montvert, was in a perfect location in a tiny village called Sainte Terre, surrounded on almost all sides by Saint Emilion. It held just the perfect balance for the family. The beautiful stone Girondine structure is a modest historic villa, which originally was used as a wine producing facility by the monks.

“The old meter-thick wooden floor beams took my breath away but what solidified the decision to take this particular property was the impressive stone staircase,” Sitawi said.

The impressive stone staircase is the highlight of the villa.

All of the plumbing, roofing, stonework, electricity and windows were already updated by the previous owner.

“That being said, the place still needed a lot of work. We have managed to convert the place from a forgotten, dark, overgrown and humidity ridden mess into a bright, airy, fresh, charming oasis for wine exploration, relaxation and reflection,” she said.

“It needs to feel honest and not contrived. We are avoiding making it ‘look like’ a French country house. We are not using the Anglicized fairy tale styling techniques of creating fake antiques and heavy curtains. We are maintaining the entire historic structure and working with the existing spaces respectfully.”

The Sitawi-Bottone family did not try to overload the place with dusty antiques and pretend they lived in the 1700s, nor did they try to hyper modernize it by making it look like a big city hotel.

“As a fashion designer, I want my family and guests to feel they are walking into the country home of an international designer who is passionate and knowledgeable about history, textiles and minimalism within the context of a wine country,” she said. 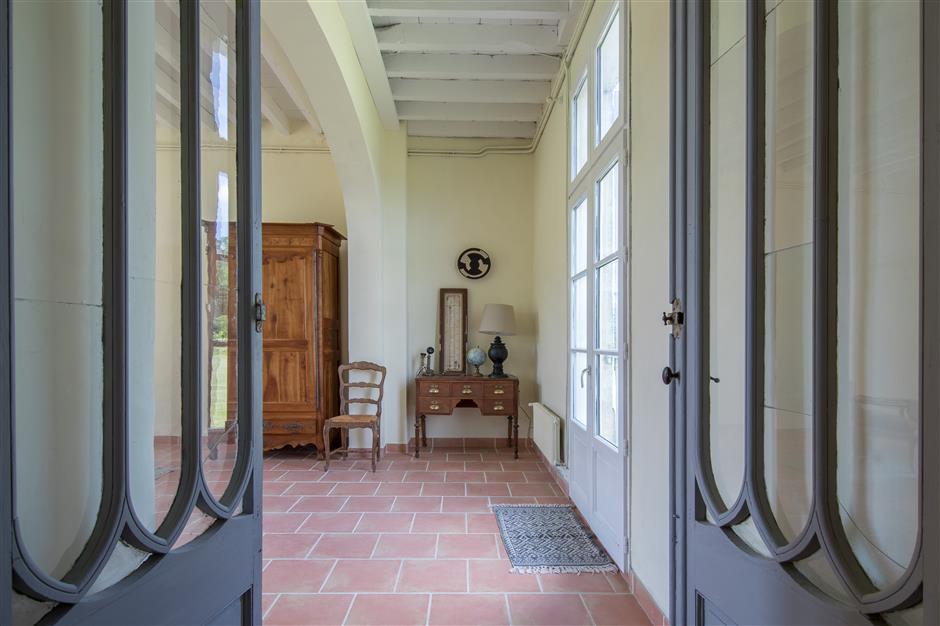 Sitawi maintained as much of the original structure as possible. Only a few doors in the stone facade were changed alongside the ancient kitchen which was radically changed as it had been abandoned for 20 years.

“Here we decided to play with the ‘industrial farmhouse’ concept,” Sitawi said. “A blend of historic modernity, borrowing from the minimalist 30s for design inspiration.”

The 17th-century property is a backdrop for the family’s minimalist 1930’s modernity.

“The main goal is to let the chateau lead the design and not try to force anything,” Sitawi said.

“My father always says, ‘work with existing materials,’ ‘introduce yourself to the home before breaking ground,’ ‘ask permission to the house to see if you are welcome to disturb her.’

“We are of course only temporarily passing through this property and preparing it for the next generation. Nobody really ‘owns’ a historic property.”

Inside the chateau, the living room is the most “antique feeling” room but it still has a fresh and light feeling.

They installed a modern antique (1930s) Modelista chandelier, a solid red oak closet, a 13th-century wedding tresseau, two velvet antique parlor chairs but with a cream linen capitonne sofa and coffee table, plus a large mirror above the fireplace.

The living room looks on to both the garden and the vineyard so there is a beautiful cross breeze.

The master bedroom has been designed to make one feel as if they are in an ethereal dream.

The light transparent cottons affected by the delicate cross breeze create a dancing effect of airy whites and grey fabrics. 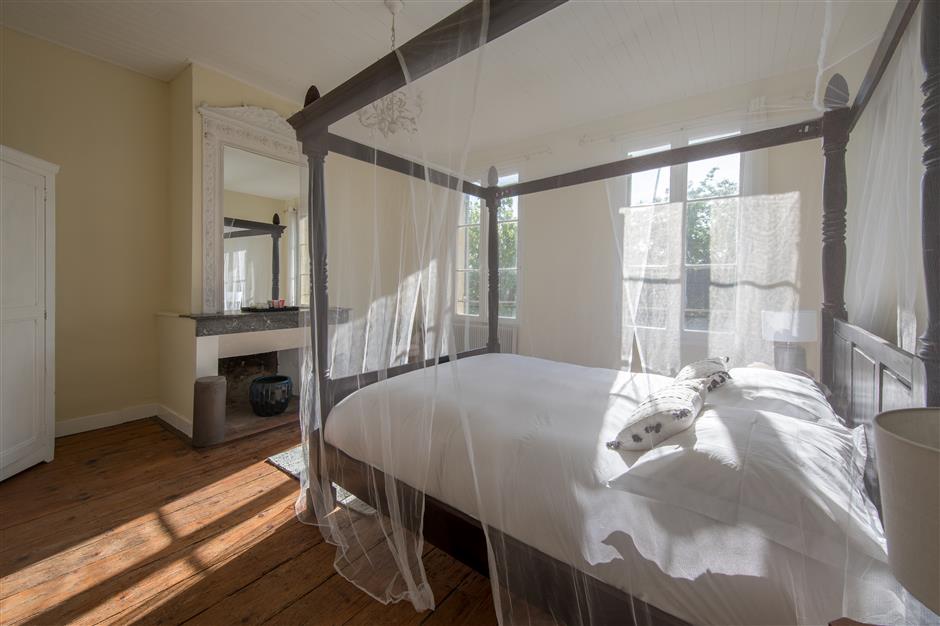 The fabric on the Balinese baldaquin bed catches the cross breeze from vineyard to the garden in this ethereally lit second floor guest bedroom.

“This is the room where you witness the fog rolling over the vines first thing in the morning and the deep, rich hues of the Southwestern sunset in the late evening. A magic dance for the senses,” Sitawi said.

The property also has four guest bedrooms accommodating eight people. The styles are airy, minimal and with neutral furnishings.

For every bit of exposed wood, there is an equally balanced white or light grey transparent fabric to balance the weight of the rooms.

The rooms are peppered with both local antique pieces and modern artisan design items.

Sitawi chose a neutral color palette as this is a summer house: butter cream and stark white as the base with very light greys and beige as a consistent second tone.

Each room has a designated color accent. The master bedroom is accented with a transparent rich plum color whereas the third bedroom has a deep marine blue touch. The twin room is accented in earthy senape seed with a black contrast and the downstairs bedroom, perhaps the most neutral, has gold, black and wheat accents. 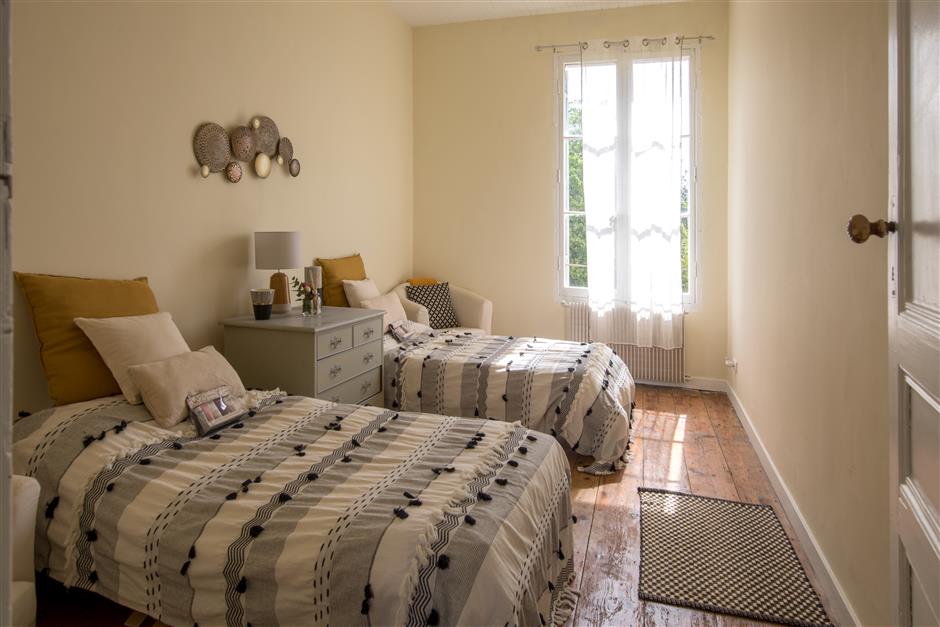 The guestroom is airy, minimal and is furnished neutrally.

The local lifestyle is evident in the design aesthetics.

“Everything is functional from the little bouquets of lavender on the pillowcases to repel mosquitoes and promote relaxation to the breezy gauze like curtains to deter moths,” the American said.

“There are beautiful, locally sourced ceramic pitchers and basins in some of the rooms and hot water boilers to have a hot steam before bed or to wash hands and feet. There are outdoor tables on either side of the property following the intensity of the sun for breakfast garden side and dinner facing the vineyards and of course a seating area for aperitif watching the sunset.”

Sitawi and her family come to enjoy the summer based in this beautiful chateau for the month of June and can’t wait for the next time. 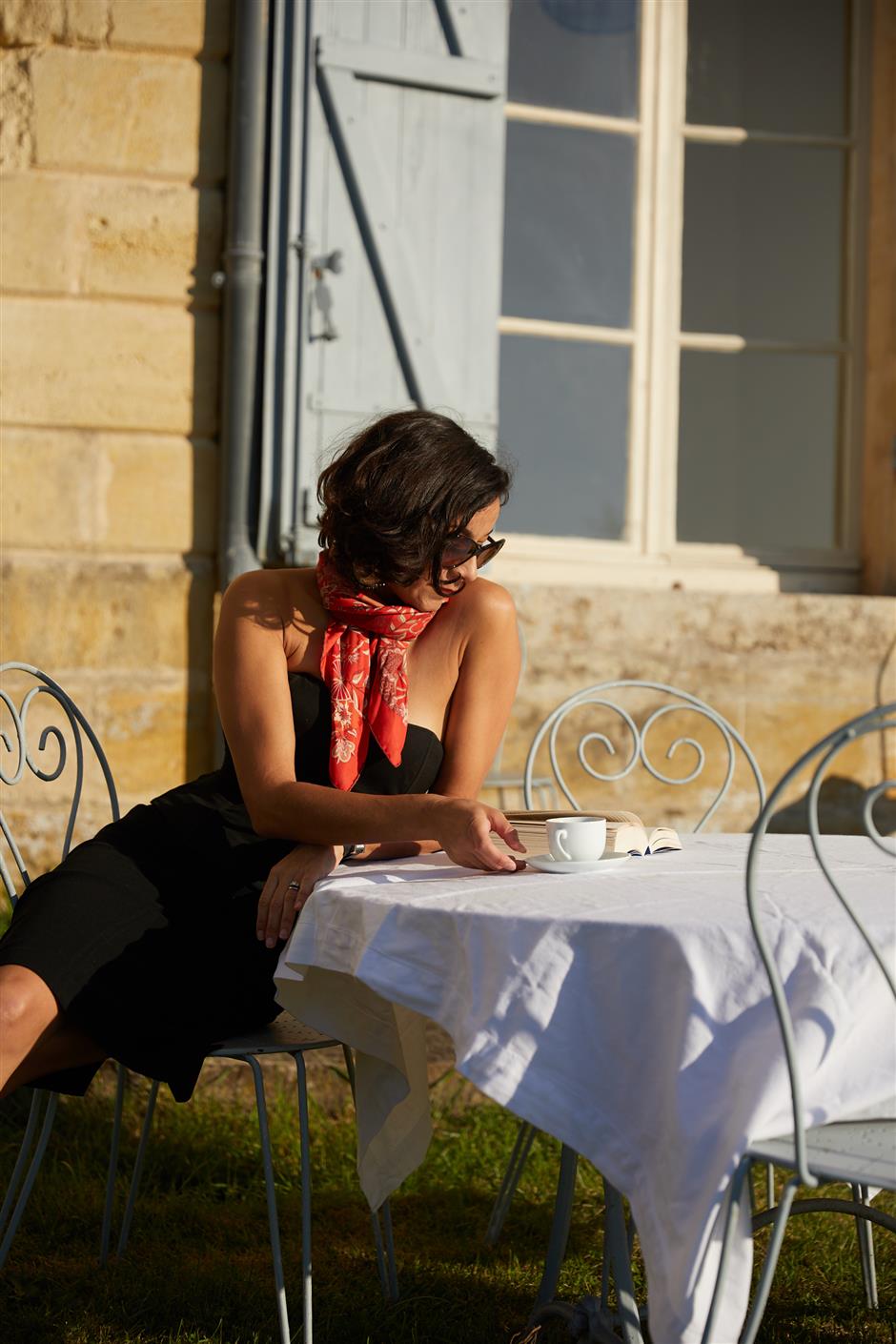 Neima Sitawi came to enjoy the summer in this charming chateau.