In three months, 59-year-old Lu Xingbao will retire from work and say good-bye to close friends with antlers.

Lu has worked at China’s largest elk natural reserve for 33 years, and he will leave a legacy of care and affection for the largest species of deer.

At the Dafeng Elk National Nature Reserve in Yancheng, Jiangsu Province, ranger Lu does patrols every day to check that none of the elk has gone missing or suffered a mishap.

Wearing his camouflage-color uniform and Wellington boots, he starts his day by examining the perimeter fences, carrying spare wire in case repairs are needed.

In scorching heat or blowing snow, his routine never changes. He scours the ground looking for traces to track the elks, who roam free.

“Most of the time, I don’t see any elk except for their traces because they are shy animals and afraid of humans,” he said. “Usually they hide if they sense people near them.”

However, it’s man to the rescue if the animals get in trouble.

“During mating seasons, some bucks in rut ram against the fences and their giant antlers get caught in the wire,” Lu tells Shanghai Daily. “In such cases, we have to anesthetize the buck to rescue him.”

His work is easier said than done. Even in the absence of emergencies, routine patrols are arduous. Some fencing crosses gullies and creeks, forcing Lu to use the fences themselves to claw his way ahead.

“We rangers are used to falling into water,” he says. “I remember a winter’s day that was especially cold, and I accidentally fell into a creek. My legs froze so quickly.” 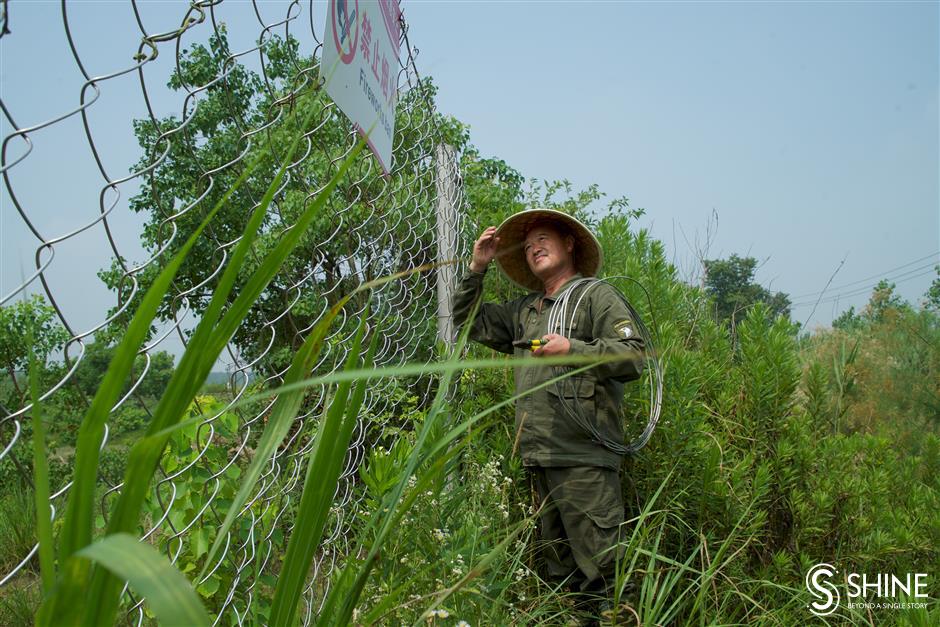 More than 5,000 elk live in the reserve, which was registered as a UNESCO’s World Heritage Site last month. The reserve covers 78,000 hectares — twice the size of downtown Shanghai — and is believed to be where elk roamed in ancient times before they became nearly extinct.

In ancient China, people called elk “Si Bu Xiang,” which means that they feature the characteristics of four different animals but don’t look exactly like any of them. The face of a horse, the antler of deer, the neck of a camel and the tail of a donkey.

Until the late 19th century, the only elk living in China were kept in a royal hunting ground in Beijing. Then they were transported to the United Kingdom.

In the 1980s, Dafeng decided to build a reserve in the coastal area of Jiangsu to re-introduce elk to China. At that time, Lu was a self-employed carpenter in a village near the designated area. He scraped by but was itchy to do something else. So he signed up for a job at the reserve, becoming its first carer.

In August 1986, 13 bucks and 29 female elk arrived at Hongqiao Airport in Shanghai from the UK. They were immediately transported to the Dafeng reserve. 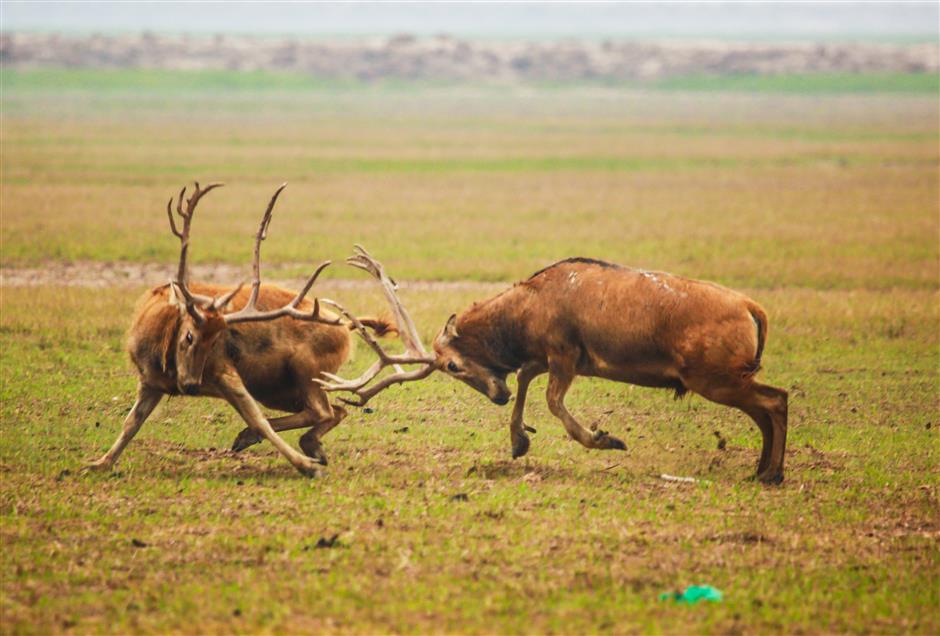 During rutting season, bucks fight for domination over choice of elk cows for mating.

“No one at the reserve had ever raised elk,” he says. “So we had to learn everything from scratch. We harvested grasses to make feed and recorded in detail their eating habits and health conditions — everything.”

In the early days, living conditions at the reserve were pretty primitive. Lu recalls five staff huddled in a small cottage with no power supply. They had to drive tractors for many kilometers over rutted mud roads to fetch drinking water.

“The mosquitoes, for one thing, were hard to deal with,” he says. “Some young people quit after a few days because of the mosquitoes alone.”

But Lu stayed on and, in the process, developed a deep bond with the elk, especially the fawns.

“The fawns always follow you around, thinking that you are their mother,” he says. “You can’t even chase them away. They are so lovely and so gentle with people.” 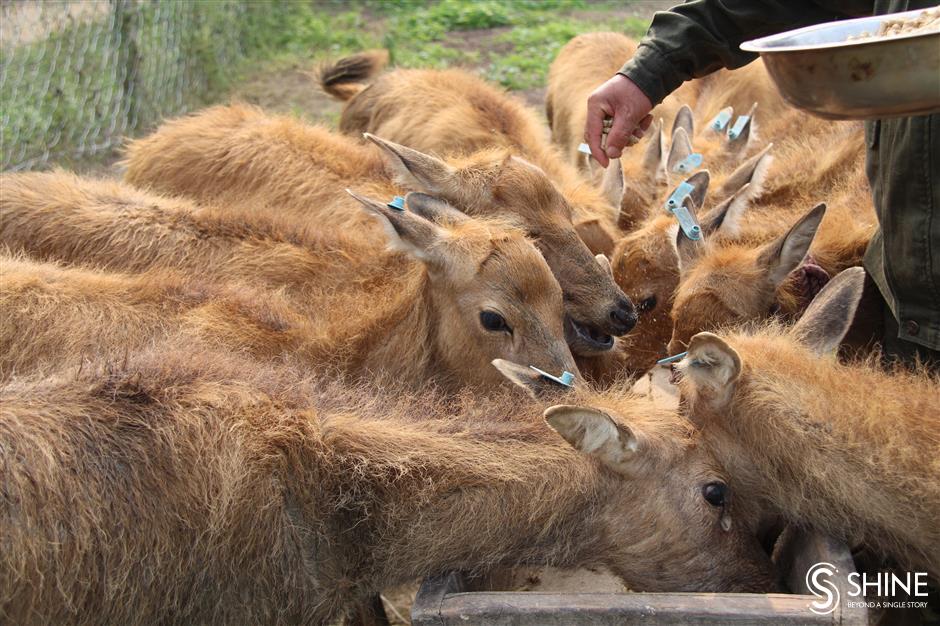 Now everything has changed much better. Feedstock is produced with automation to the highest standards, and elk eat carrots as snacks. Lu no longer has to share squeezed quarters with colleagues.

One of the first elk Lu raised was a doe named Xingxing. She was the longest-living elk in the reserve — 23 when she died, compared with an average lifespan of about 15 years.

“For all her life, I never left her side for a single day,” he says. “When she was 13, her teeth began to fall out and she suffered cataracts. Every day I cleansed her eyes and helped her eat until the last day of her life. When her condition worsened, I went to a hospital to buy medicine for her.”

On the last day of her life, she refused to eat anything, including her favorite food. With Lu by her side, she died.

“I couldn’t sleep for days after losing her,” Lu says. “She had been my friend for more than two decades.”

After transferring to the ranger work, Lu still kept his deep connection with the animals. The rangers keep in close contact with local farmers, fishermen and employees at a nearby power plant. Whenever an elk falls into a pond or ditch, or gets tangled in power plant wires, people would call Lu and his colleagues for help.

Two years ago, two bucks actually fell into the sea from the coastal concrete levee. People gathered around to watch. The elk were frightened and started to swim toward the deep ocean. Lu and his colleagues drove to the scene but found that they couldn’t deal with the situation by themselves.

They called the police, who supplied a boat. They drove slowly around the elk, “herding” them back slowly to a relatively low spot of the embankment. After an hour’s effort, the two elk were rescued.

“That was the first time ever we had to save elk from the sea,” Lu says. “Elk are good swimmers, but they usually swim only in rivers and creeks. If they had become exhausted at sea, they surely would have drowned.”

Because of the long-term devotion to his job, Lu was named as one of the five “Ecology Guardians” of Yancheng this year.

But now, as retirement looms, Lu is sharing all his experience with younger carers. He said he is already feeling sad at the thought of parting from the elk.

“I think even after I retire, I will come back here from time to time, maybe once a week,” he says. “It is not easy letting go of these lovely creatures.” 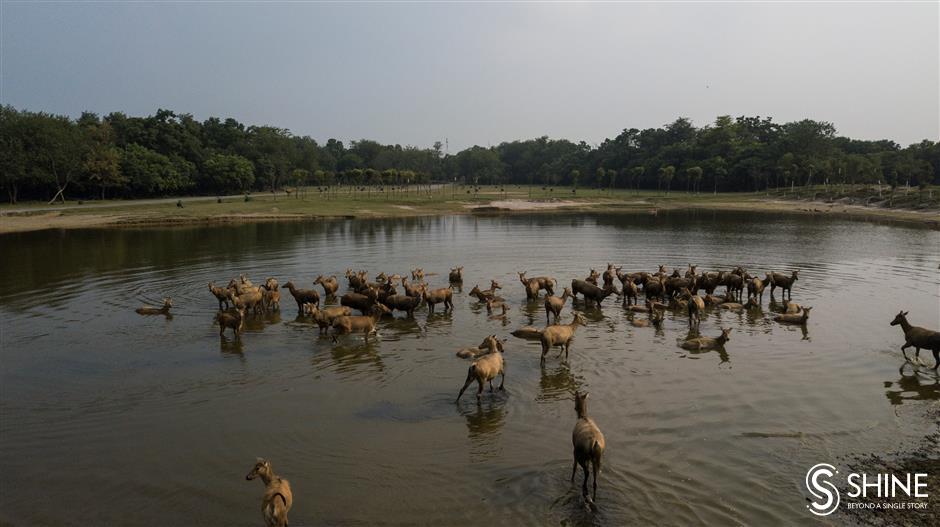 A group of female elk gathers in a pond at the Dafeng Elk National Nature Reserve.