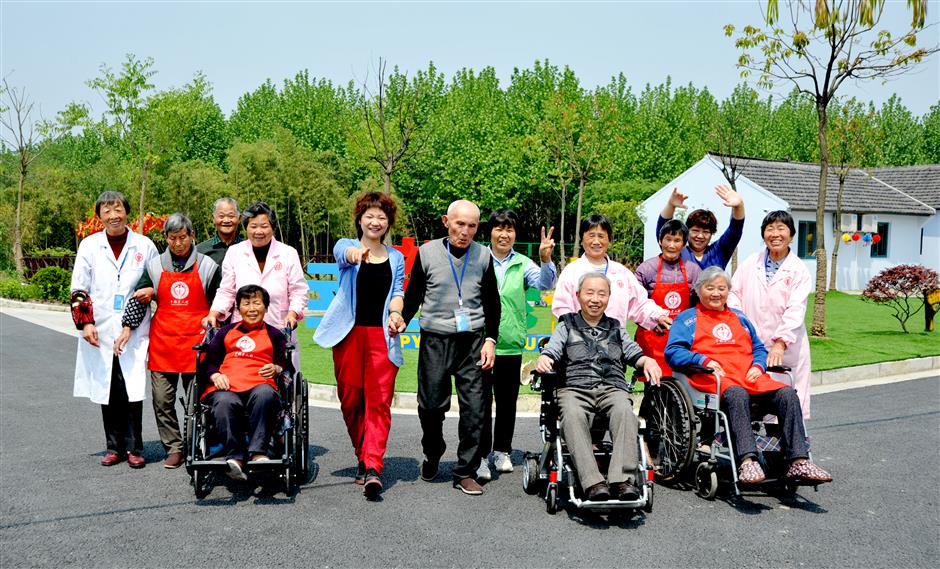 Happy Elder House, a happy family of elderly and staff 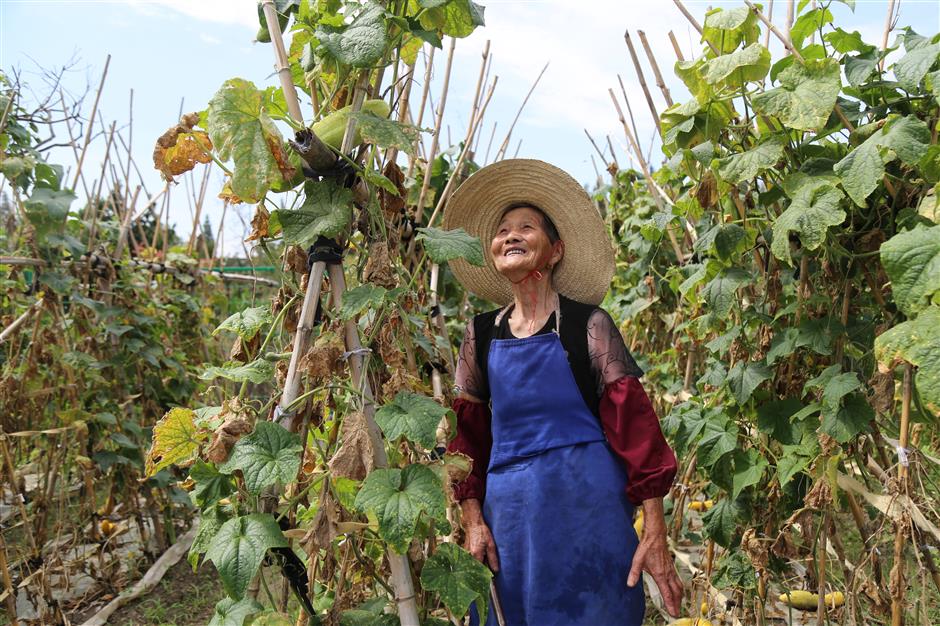 Nursing home residents remain connected with the farm life of their past.

People who placed elderly relatives in nursing homes were once considered unfilial in China because, in prevailing opinion, it was tantamount to abandonment.

Times and ideas have changed dramatically in recent years. Many elderly choose to live in care centers that provide full services and a familial community.

“I requested the move, and I want to spend my remaining years here,” says Wang Xuemian, 89, who resides in a facility called Happy Elder House.

Wang’s children initially objected to the idea because they worried it would bring shame on the family.

“I want to live longer,” said Wang. “I used to live in an apartment in Songjiang District. The neighborhood was noisy and crowded with cars. Looking out the window, I could see only buildings. The air quality here is much better. After settling in Happy Elder House, I gained weight and my legs no longer swell.”

Driving through lanes lined with towering trees, I arrive at the care home in the town of Yexie in Songjiang. According to staff, the average age of the residents is 87.

The white-walled units with black-tiled roofs are surrounded by farmland and ponds. It looks like a quiet, peaceful village rather than an elderly-care facility. Actually, the houses that make up Happy Elder House leased from villagers. After renovation, they were turned into a canteen, bedrooms, offices, an activity room and a broadcasting station.

“My favorite place here is by the pond,” says Wang. “I enjoy the reflection of the reeds and the ripples the fish make. The chairs and the railings by the pond are spotless. The staff are very responsible and hardworking. They are just like family to me.”

Wang graduated from Shanghai Normal University in 1956 and then taught English at a middle school. After retirement, he continued to tutor students, some of them from impoverished families. Wang never charged them any fees, according to the staff.

Although Wang has mobility difficulties, he insists on walking around Happy Elder House. He tells me he walks about 3 kilometers every day and spends hours reading newspaper, writing articles and singing songs. To him, life is fulfilling.

“He told me that he could teach me English, but I don’t think I could learn it,” says the director of the caring center whose surname is Jin.

Wang lives alone in a two-bed room equipped with an emergency bell, air conditioner and television. The room is on the first floor of the house belonging to the family of Jiang Qiuyan, the 40-year-old woman who founded Happy Elder House.

“We offer the elderly villagers an affordable nursing home near their own homes,” says Jiang. 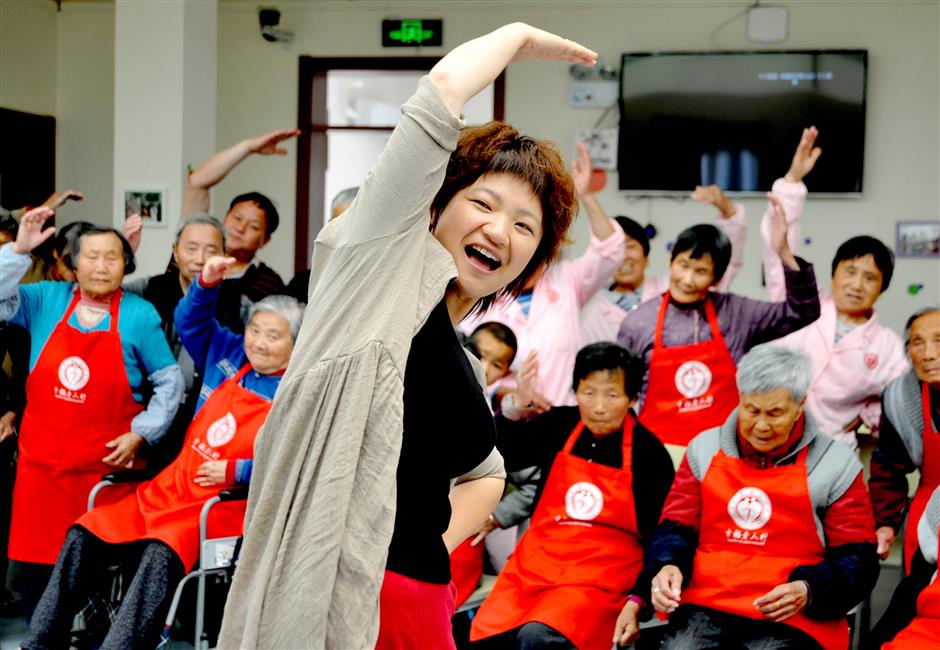 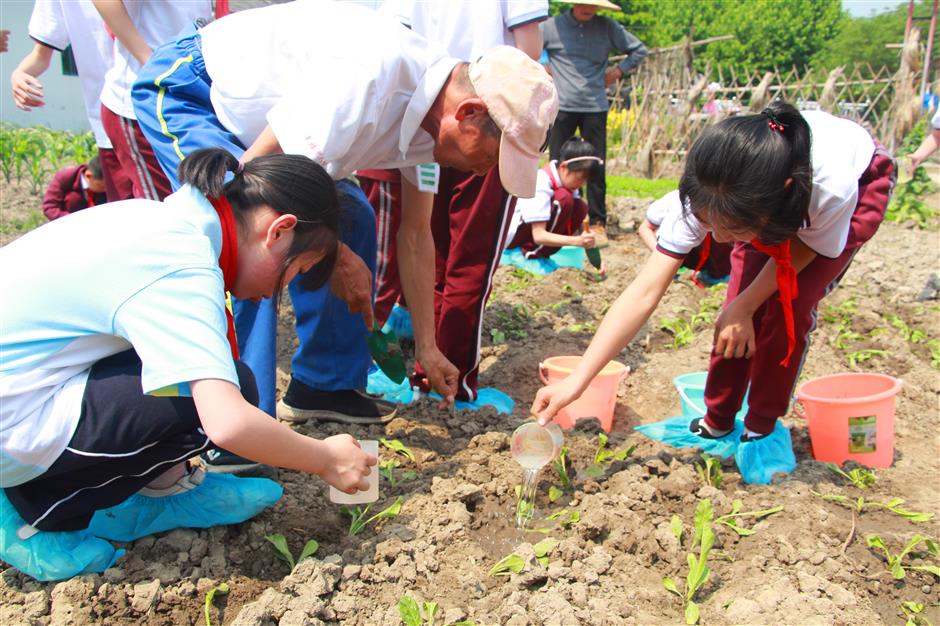 A former farmer tells young people some of the basics of agriculture.

Growing up in the village called Yanjing, Jiang had long been involved with charity work. She tells me how distressed she was to find her grandmother eating leftovers on occasional visits. That made Jiang feel guilty that she was too busy to look after the old woman.

Her grandmother is not an exceptional case. Many elderly live alone in Yanjin, which has the most concentrated aging population in the town of Yexie.

Concerned about this problem, Jiang and two friends established the nursing home. Unfortunately, her grandmother never had the chance to live there. She died before its opening in 2016.

“I have engaged in many charity activities that never seemed to last,” says Jiang. “This project is sustainable. We hire local women in their 40s and 50s, which not only helps the town’s employment but also makes the elderly feel more at home.”

Part of that feeling of connection comes from the surrounding farmland. Most people in the area farmed all their lives. The elderly residents of Happy Elder House help tend some plants and crops and also pass on their knowledge to younger people who come to visit them.

“Being old doesn’t mean being useless,” says Jiang. “We want our residents to feel useful and maintain their dignity.”

An 86-year-old veteran named Luo Jinshu tells me he washes his face, eats and dresses himself without a caregiver’s assistance.

To bolster his strong sense of self-reliance, Luo helps out with the broadcast of Huju Opera every afternoon. Lacking experience with audio equipment, he holds a microphone in front of a radio. Before dinner, Luo and other seniors practice square dancing for 20 minutes outside, weather permitting. 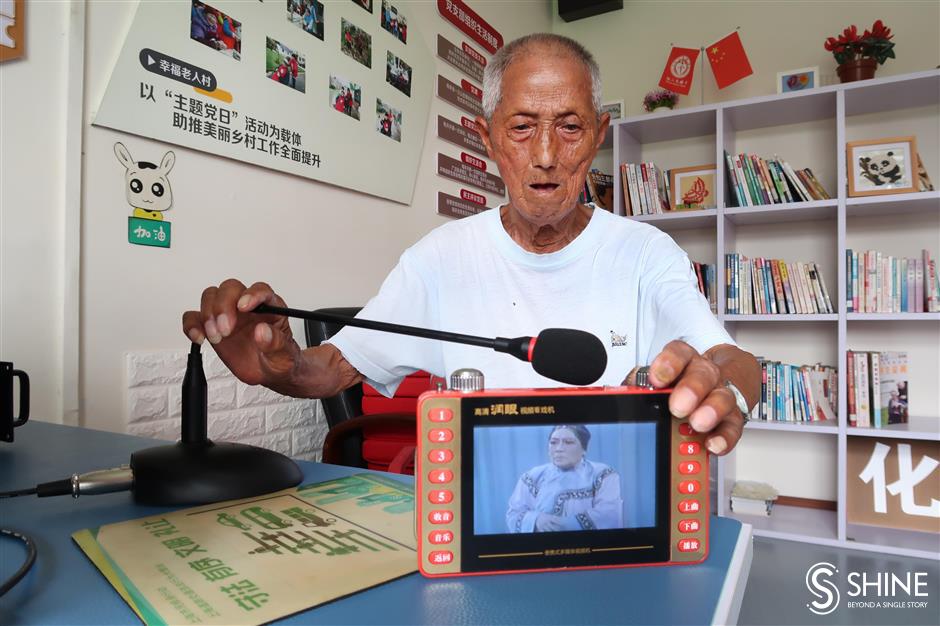 Luo Jinshu helps out with the broadcast of Huju Opera every afternoon. 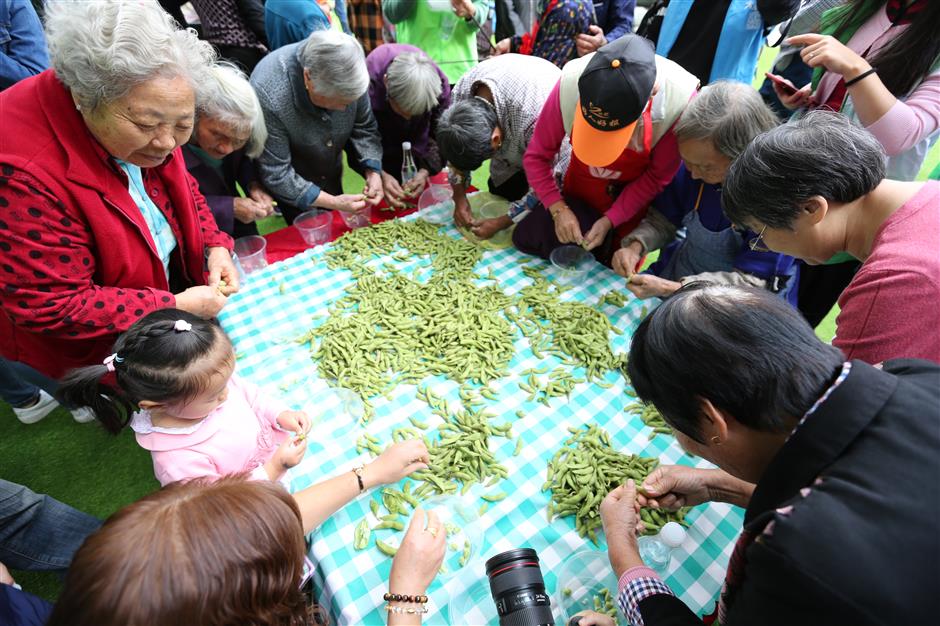 The elderly participate in a contest to see who can shell the most soybeans at last year’s Double Ninth Festival.

He would have been happier if his wife were with him. They planned to move to Happy Elder House together, but his wife died of an accident at home before the move occurred.

Luo wakes at 4:30am and wanders in the garden before having breakfast at 5:50am in the canteen.

Apart from the 38 residents of Happy Elder House, another 103 elderly people who are 70 years and older and live alone in the village or have financial difficulties have breakfast free at the nursing home. It’s part of a charity project.

“It is more than a breakfast,” says Jiang. “We want elderly people in the village to get out of their homes and have social interaction. Some choose to stay after breakfast to help wash dishes or do some weeding in the garden.”

Entering Jiang’s office, I see a calligraphy work stating that filial piety is the foundation of all other virtues. She shows me a beautiful paper flower made by a resident in the weekly handicrafts workshop.

To celebrate the Double Ninth Festival, which honors the elderly, Happy Elder House organizes a festival each year around the theme of “snail.” It advocates respect for the elderly and their slower pace of life.

Last year, one of the activities at the festival was a contest peeling edamame, or immature soybeans, to make a traditional dish. About 500 people participated. The winner was an 81-year-old who peeled 500 grams in 10 minutes. Intriguingly, the slowest person was also awarded the Snail Prize.

“We want to encourage people of all ages to participate in activities,” says Jiang.

Whether helping elders change their clothes, moving them from wheelchairs to the toilet, maintaining hygiene or feeding those who cannot feed themselves, the caregivers have their work cut out for them.

“The staff of nursing homes must be patient, caring and scrupulous,” says Jin.

As I am leaving at 5pm, the residents are having a dinner of tender rice, a drumstick, minced bok choy and soup. The caregivers serve food and help some of the residents cut the chicken from the bone.

“We regard them as our own grandparents, while they also see us as their grandchildren,” says Jiang. “They call me meimei (an amiable term for little sister) and stuff snacks in my pockets secretly. My grandmother did the same thing to me once upon a time. I watch them get old while they watch me grow up.” 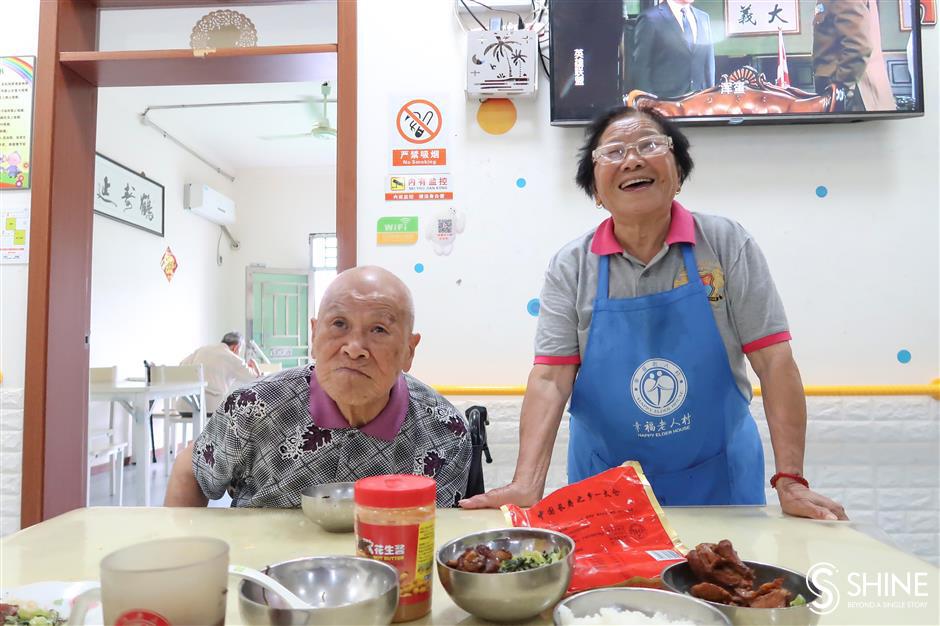 A couple in their 90s stay at the nursing home together. 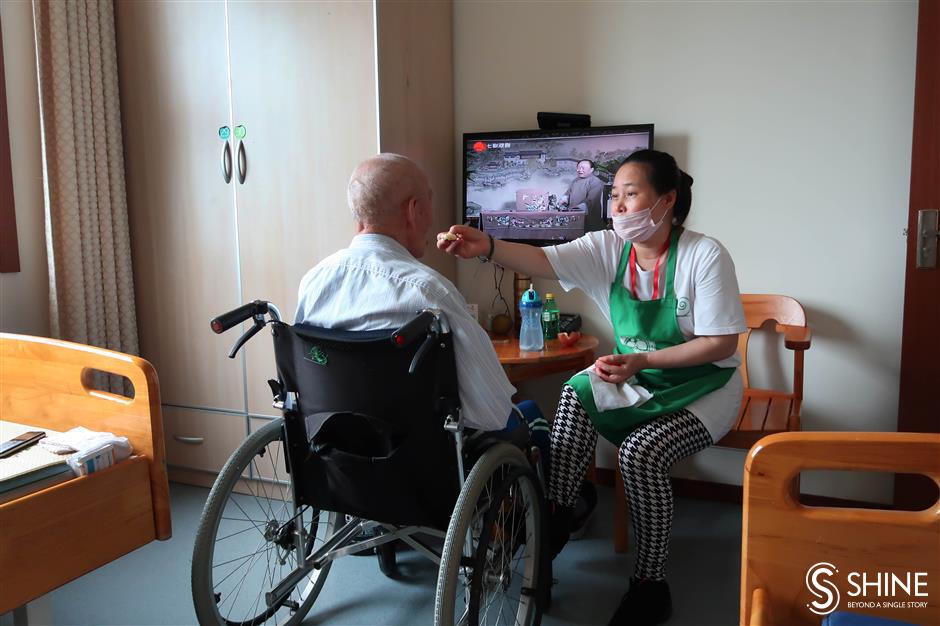 A caregiver feeds an elderly resident.